A Future Diagnostic Tool from Apple will ingeniously work with iTunes

Earlier this morning a rumor report stated that "Apple announced (internally) that they have put the final touch to the tools that will facilitate a diagnostic." That's interesting, considering that an Apple patent application that was just published last week introduces this diagnostic process in great detail. If you want to know more of the real details, then this is the report to read. According to Apple, the new diagnosing application that will reside on future Apple devices will be ingeniously tied into iTunes where you now get updates and so forth. It'll be an easy way to get simple device problems fixed without having to visit a Genius at the Apple Store. Now that's a great idea.

When an electronic device (e.g., a media player or a portable telephone) becomes corrupted (e.g., when a device's hardware, software, or stored data fails to function properly), a user is usually unable to determine, let alone fix, the problem his or herself. Conventionally, the user has to call a technical support helpline in order to try and explain to a technician what the problem may be. Usually, this is insufficient to allow the technician to discover what is wrong with the device, and the user has to go so far as to send the device back to the manufacturer for correction or total replacement of the device. These conventional options for attempting to resolve corruption suffered by an electronic device are time consuming and expensive for both the user and manufacturer. Accordingly, what is needed are systems and methods for reducing the cost and time required for diagnosing and fixing various electronic devices.

Apple states that a disadvantage of conventional electronic devices is that the options for attempting to resolve corruption suffered by such devices are time consuming and expensive for both the users and manufacturers of the devices. Therefore, according to certain embodiments of the invention, an electronic device may be provided with an application or firmware or any other type of program that could collect useful information related to how the device is used. For example, the application or firmware of the invention may be provided in storage device 104 of an Apple device (iMac, MacBook, iPod, iPhone) as a log or breadcrumb program 116 as noted below in FIG. 1. 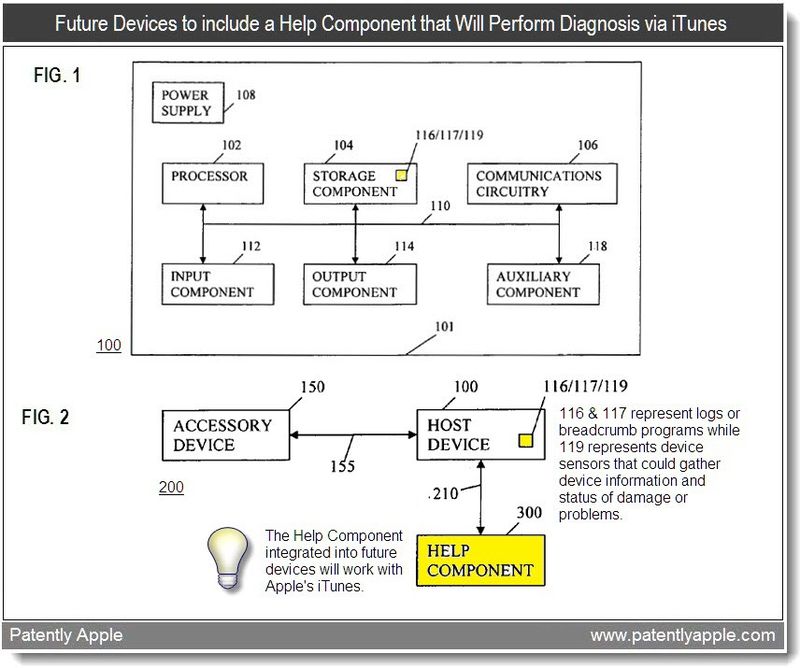 In some embodiments, program 116 may create and save a historical log(e.g., log 117) of all or at least certain types of events experienced by the device, including any action taken by any hardware component of Apple device and any response taken by any software or firmware of the device, such as crash events, program update events (e.g., software update events or firmware update events), media or other file type transfer events (e.g., file download events or file upload events), environmental events, and usage events, for example.

In some embodiments, the log may store data that can identify the one or more servers, accessories, and/or other devices that its device may have communicated with during the event (e.g., accessory device 150 and/or help component 300 of FIG. 2).

The Help Component used with iTunes

The key may be able to extract necessary information from this log for helping to diagnose an Apple device while protecting a user's private information or other particular details that may be stored in the historical log from being seen or accessed by another entity. The key may be a summary of the historical log that may be useful to and accessible by an entity for diagnosing or fixing the Apple device. The key may be generated by extracting information from the log in an abstract way and/or by using checksums, for example.

In some embodiments, the help component could include a media server operative to provide media to host device, such as iTunes. In such an embodiment, every time a user connects an Apple device to iTunes for communicating media or other data there between, the help component may automatically, or at the user's approval, access at least a portion of the log from the connected Apple device.

The log may be generated periodically (e.g., every 5 milliseconds, every 30 minutes, every 5 hours, after every reset, or at any other time based or event based or environment based event occurs). Each generated log may be stored on the Apple device or uploaded to a remote entity, and each log may be retained or overwritten by a more recently generated log depending on available storage space and/or processing capabilities, for example. 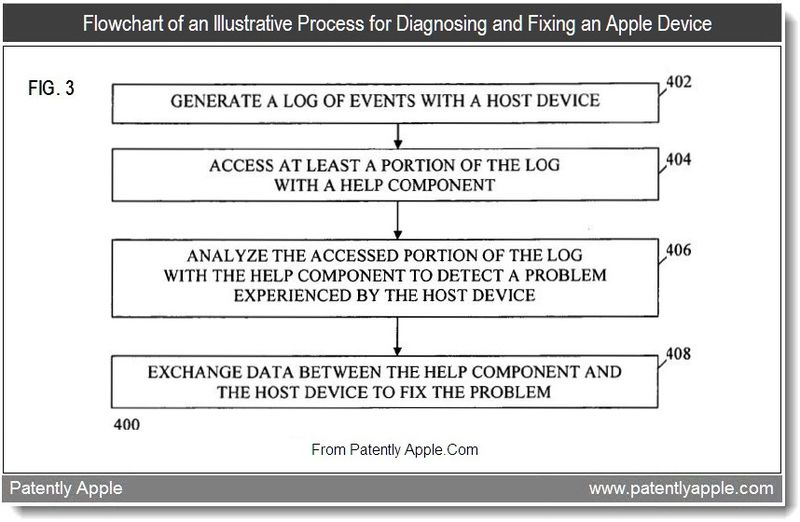 Apple's patent FIG. 3 shows a flowchart of an illustrative process for diagnosing and fixing an electronic device in accordance with the invention.

Apple's patent application that was just published last week was filed in May 2011. Apple claims the benefit of a provisional patent that was filed in 2007. Apple lists the inventors as Svetlana Samoilova, Wing Law and Andrew Hodge.

Whether the generated rumor was simply confirming Apple's patent details or simply masking the reality of such a patent can't be confirmed at this time. With that said, the bottom line is that this very interesting patent lays out the details of this new diagnostic tool very nicely and we could all hope that it comes to market in the not-too-distant future.

Ahh, perhaps you're a lawyer. It's your choice of words and the way that you shift your argument to win. You had said that the patent was about generic electronic devices when Apple specifically lists iPhone and iPod etc.

The bottom line is that the USPTO will determine if this is patentable, not you, I or John. IBM's diagnostic system is no longer with us or Leveno and I think that was the point that John was trying to make, not that IBM the company was stupid.

When you look at the basic pattern that is being patented you must abstract away the specific product from a company, in this case iTunes. You have an electronic device connecting to a software diagnostic. That is the essential element in question. If Apple were to make it iTunes specifically, if Apple were awarded the patent then they would have no basis for infringement if a second party hooked up their electronic device to a software diagnostic named FooBar, because FooBar is not iTunes.

Portability remains irrelevant, or is certainly very arguable. My refrigerator is an electronic device and has wheels, making it portable. Don't conflate portable with small. Words mean things, and one must choose them wisely in patent applications.

BTW, I do believe that IBM remains a fairly sizeable and successful company, about $30B more annually than Apple.

It appears you require Mac ownership to have an opinion here. I am glad I own one.

In Apple's patent background they state, "When an electronic device (e.g., a media player or a portable telephone) becomes corrupted.." The context throughout the patent is about portables. What aren't you getting?

The solution consists of a device plugging into iTunes. Duh, that's why the patent is emphasizing portable devices.

You're a PC'er. I get it. But that doesn't change the facts that the method that Apple is patenting has nothing to do with an ancient, losing idea from IBM.

The patent is for generic "electronic devices," and only uses "portable" in an example. Regardless, the pattern is not new, but decades old. The presence of iTunes is irrelevant. BTW, I have never worked for IBM.

IBM was doing this on mainframes (an electronic device) in the early 1980s. Self diagnostics would detect the issue, communicate a log "back home," where a fix or adjustment would be issued directly onto the computer. Just because Apple is doing it doesn't make it a new pattent.