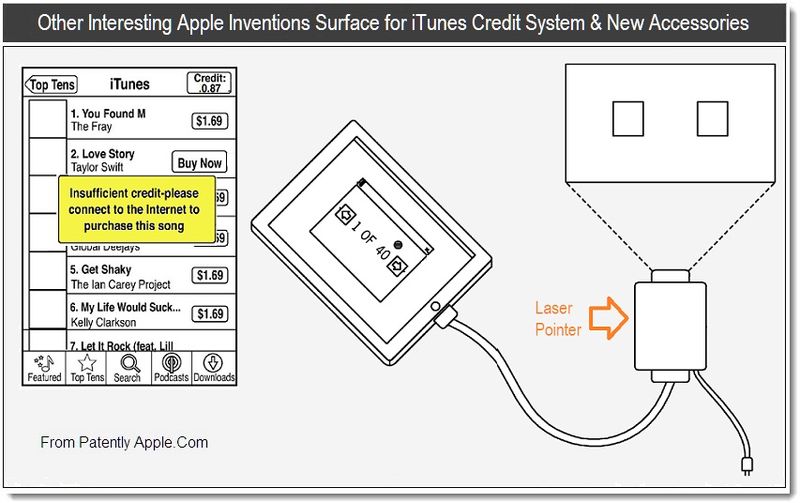 Some days there's a plethora of interesting small and medium sized inventions of one sort or another that surface from Apple that don't warrant a full report yet are interesting nonetheless. In Patently Apple's final report of the day we cover a lot of ground in as short a time as possible. Some of the classic inventions covered in this report include a new iCloud / iTunes credit system in the works that hints of a subscription service while covering a number of interesting Keynote Application advancements that even hints of a laser pointer accessory. To top it off we cover Apple's invention for a video converter accessory for the iPad and even look at Apple's manufacturing tool that creates the Apple Logo cutout found on MacBooks. If you have the time, take a look at this smorgasbord of Apple's inventions and you're bound to find something of interest, for sure.

Apple's new patent application relates to systems and methods for enabling users to purchase access to media items when a device is not connected to a remote source from which the media item could be remotely purchased and received. In particular, this is directed to locally storing media items that the user is not yet authorized to play back, and enabling the user to purchase and unlock the media items using prepaid credits stored on the device. 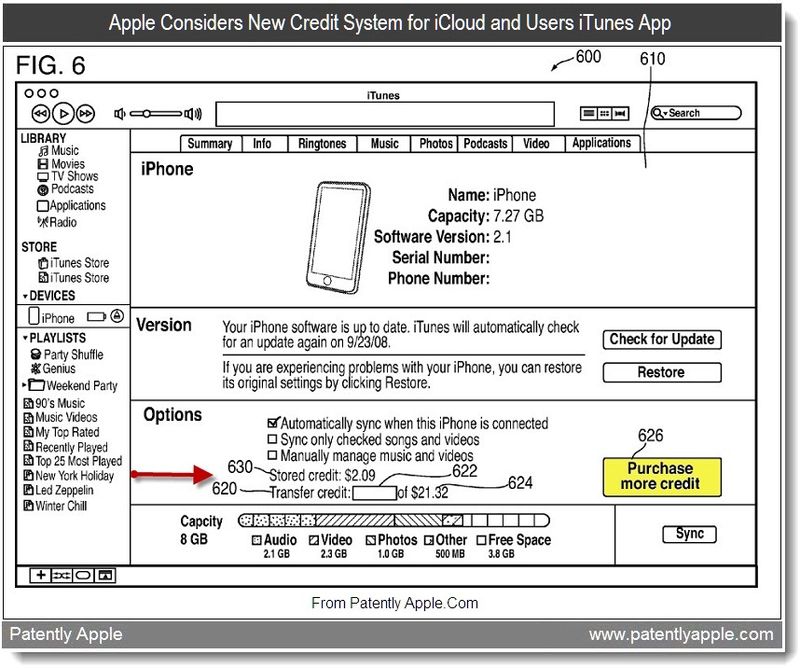 Apple's patent FIG. 6 is a schematic view of an illustrative display for transferring credit from a host device application to the electronic device using any suitable approach. Apple's patent does reference a subscription service and this new credit system could come in handy for such an arrangement. For more on this invention, check out Apple's patent application 20110178896. (Temporary link #1 is good for 48 hours). 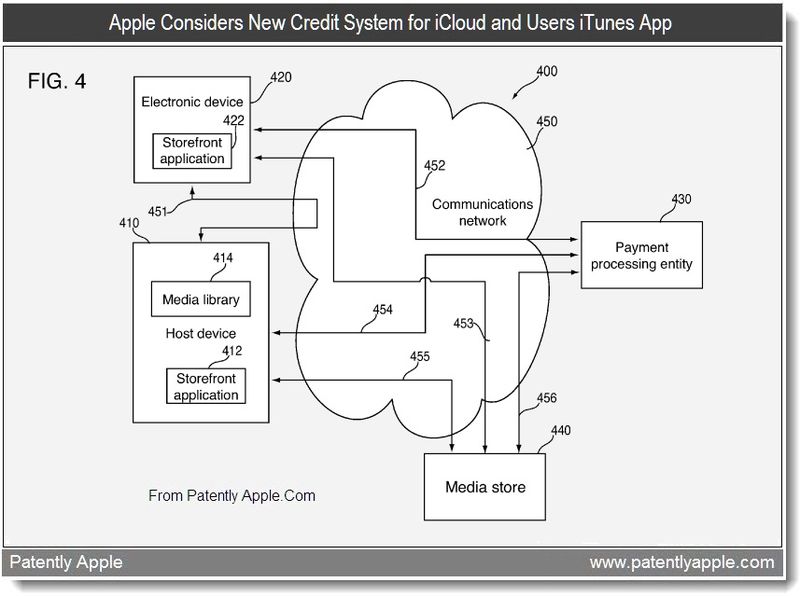 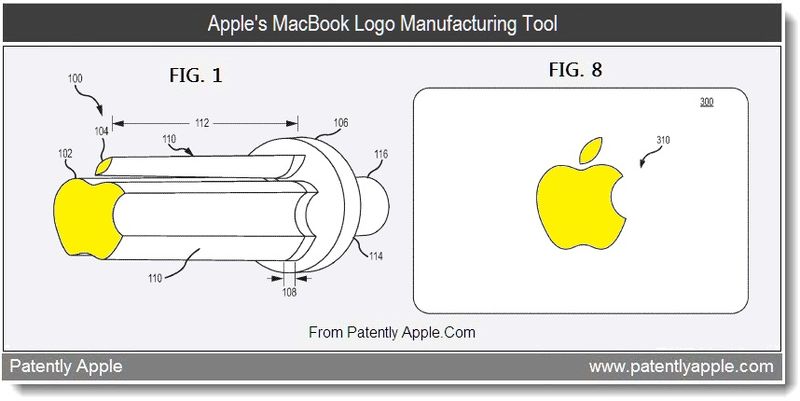 Another Apple patent application published today titled "Apparatus and Method for Intricate Cuts" generally relates to apparatuses and methods for intricate cuts and, more specifically, to creating sharp features in cutouts as those found in Apple's MacBook lineup as shown in FIG. 8. For those interested in this invention, check out patent application 20110183580. (Temporary Link # 2 is good for 48 hours)

Apple's patent FIG. 6 shown below depicts an iPad operating in a video out mode with a laser pointer. 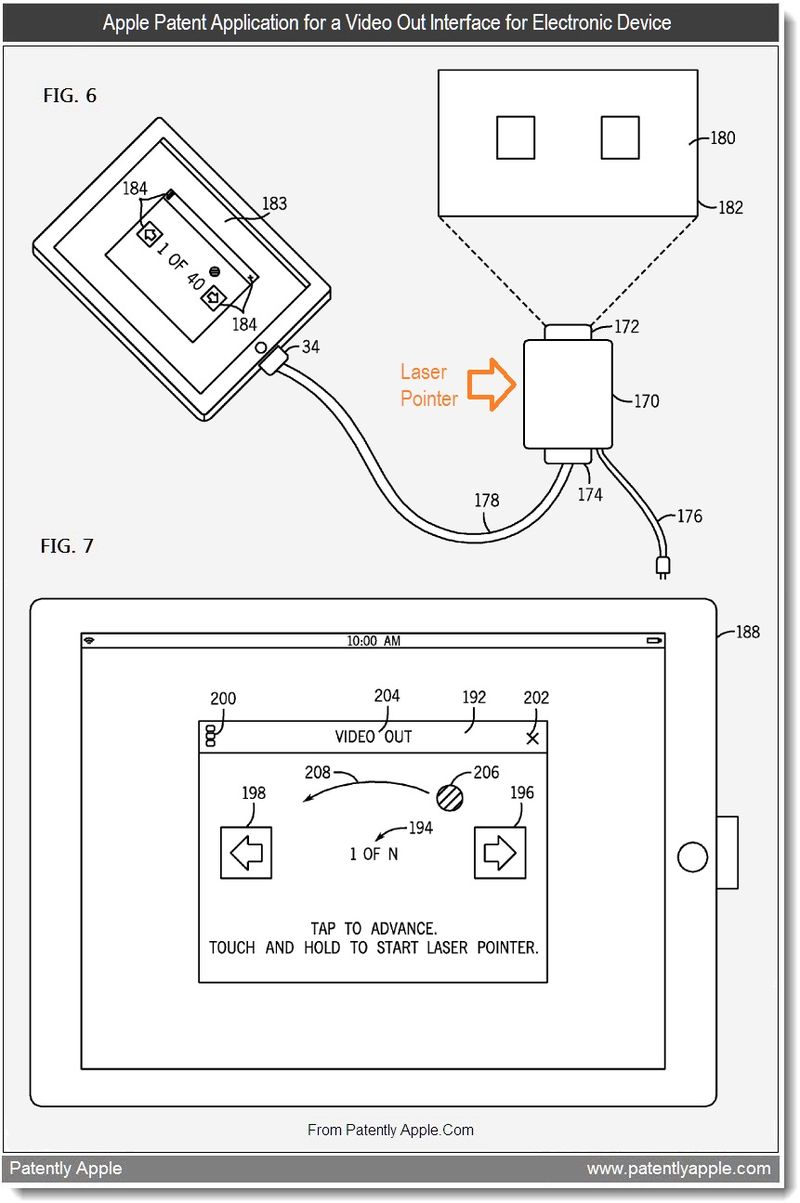 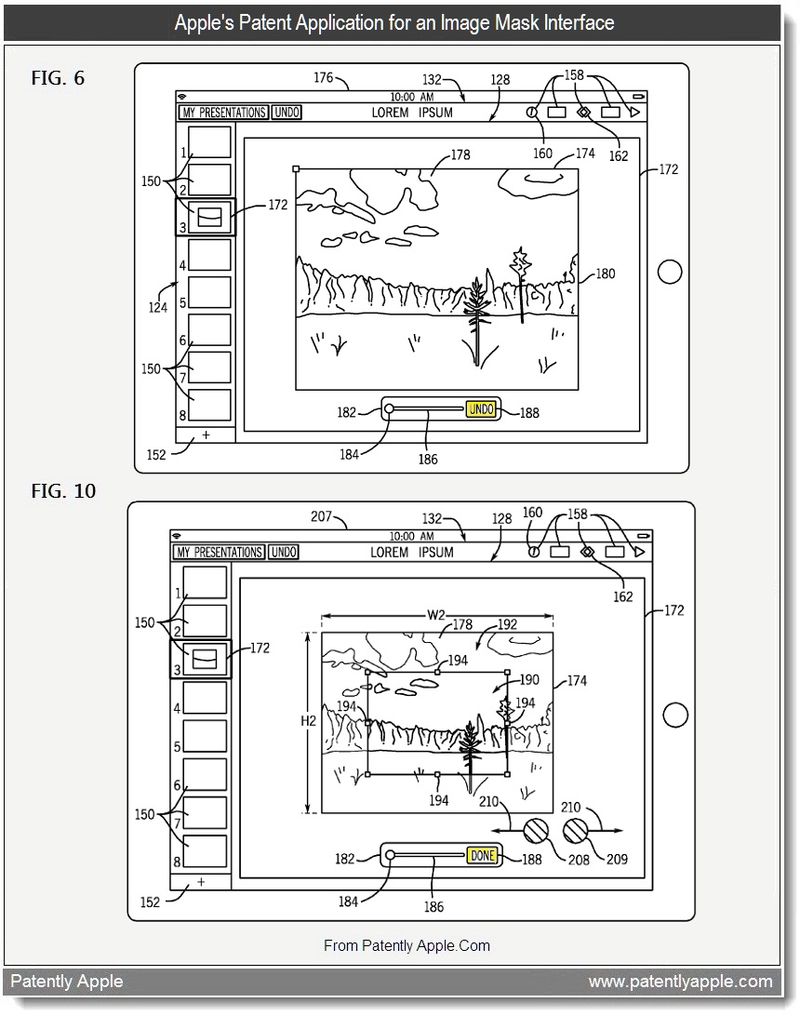 Apple's abstract states that a user interface is provided for interacting with slides and objects provided on slides. In certain embodiments, the user interface includes features that are displayed attached to or proximate to selected slides or objects. In embodiments, aspects of the user interface may be used to preview, review, add, or modify transitions associated with animation from one slide to the next (or previous) and builds associated with animation of objects on slides. (Temporary Link # 5 is good for 48 hours)

Patent Application 20110181521: Techniques for Controlling Z-Ordering in a User Interface 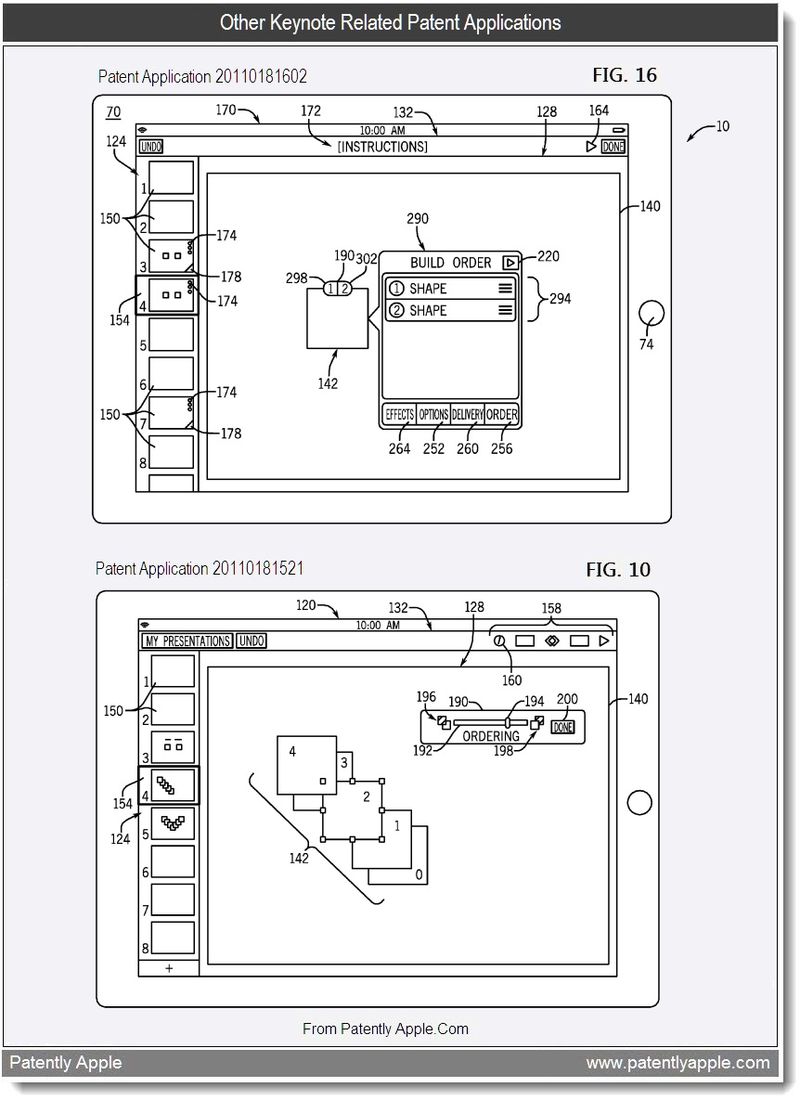 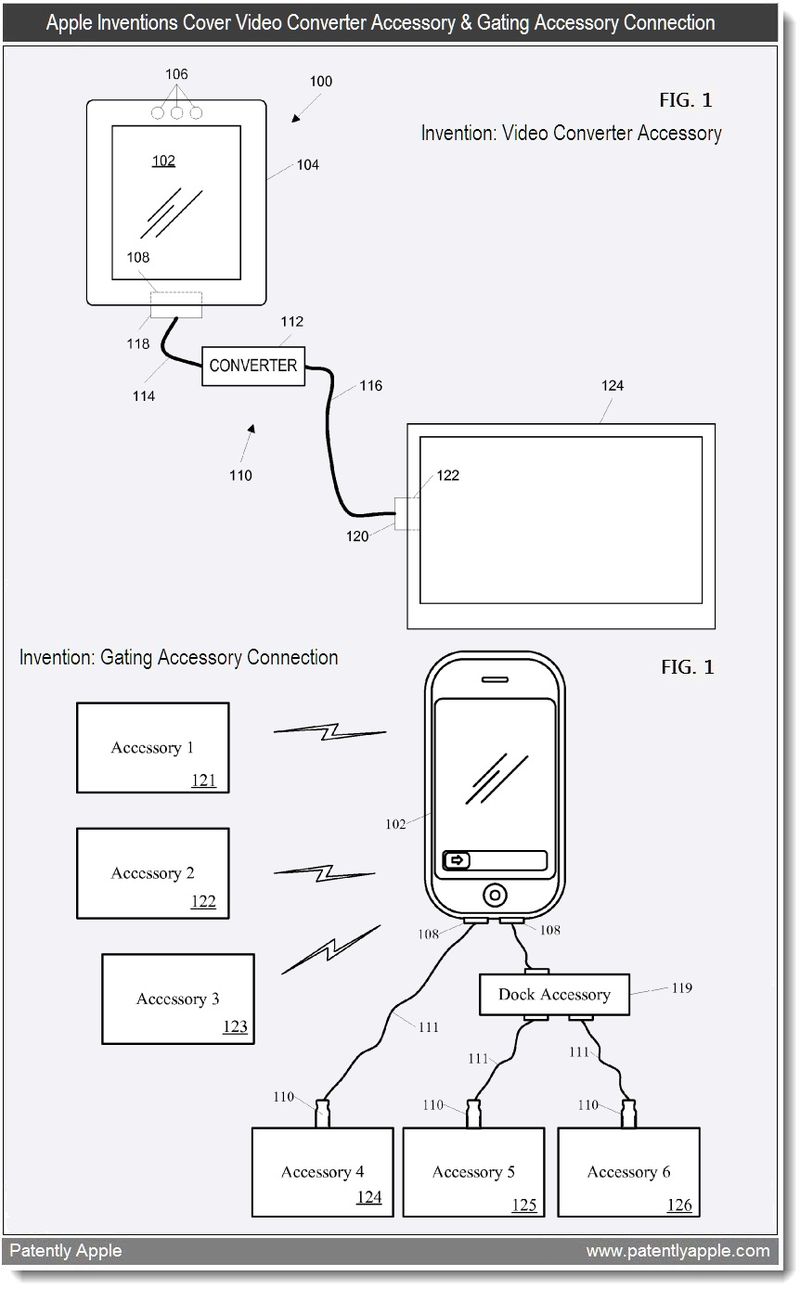 Re Video out: the picture has the iPhone having 2 leads come off the bottom - one to accessory 4, one to the dock accessory. So that's basically a nod towards potentially being an iDevice with DP, so a inclusive of Thunderbolt/Light Peak.

Seems it's pretty broad as it's an accessory that draws power, attached or in communication with the iDevice. Basically allowing to dynamically power up or down accessories. (Keyboard, video adapter, camera, radio tuner, in vehicle entertainment system, speaker dock, card reader etc). talking about lingoes that the PCD (iDevice) can talk using.