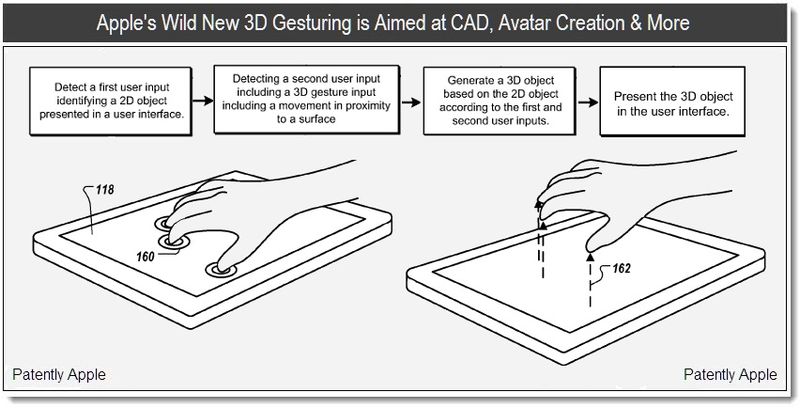 On July 7, 2011, the US Patent & Trademark Office published a patent application from Apple that reveals various concepts behind newly advanced 3D gesturing that will apply to CAD applications for product and gaming developers as well as for consumers. According to Apple, next generation iPad and/or other iOS device displays will allow consumers to create avatars for 3D environments or assist homeowners in designing new landscapes and more by using simple 3D gesturing. The new 3D gesturing will control color and textures while allowing users to uniquely rotate objects to gain different perspectives of their designs. This is wild stuff that is bound to give Apple's competitors another huge headache.

Overview: Who will benefit from 3D Gesturing?

By providing a convenient and intuitive way to generate and modify 3D objects based on 2D objects in photographs, a 3D model of a community or an entire city could be generated through the cooperation of the residents of the community or city, each individual using the device to modify computer-generated 3D models of buildings or landscapes that the individual is familiar with.

In this patent, Apple introduces us to 3D gesturing inputs. Apple's patent FIG.1 illustrates an iPad (device 100) which includes a touch-sensitive display that is responsive to touch inputs, 2D and 3D gesture inputs. An application program, such as a CAD program, can be executed on device 100 to enable a user to generate and manipulate 2D and 3D objects. 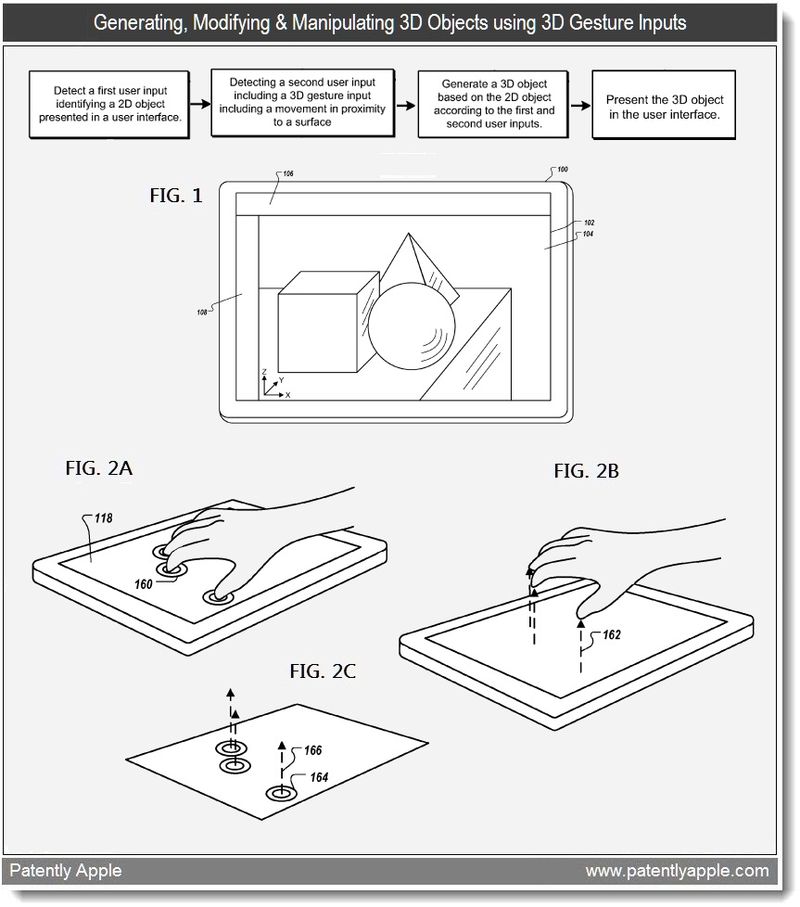 The device, such an iPad, is intuitive to use because objects could be shown in drafting area 104, and the user can touch and manipulate the objects directly on the display (as compared to indirectly interacting with a separate touch-pad). In some implementations, the CAD program allows the user to generate 3D objects from 2D objects. For example, a user could generate a 2D object using a multi-touch input, and then lift the fingers simultaneously to extrude the 2D object to form a 3D object.

Referring to FIGS. 2A and 2B shown above, one type of 3D gesture input could include touching display surface 118 at multiple touch points 160 and pulling up 162 the fingers for a distance. Referring to FIG. 2C, the 3D gesture input shown in FIGS. 2A and 2B will be represented by double circles 164 indicating touch points on display 102 and dashed lines 166 indicating movements of the fingers or pointing devices.

Now referring to FIGS. 3A and 3B shown below, a user could generate triangular prism 128 based on triangle 122. Apple's patent FIG. 3A shows a sequence of finger movements that define a 3D gesture input for generating the triangular prism. Patent FIG. 3B shows graph 132 that includes triangle 122 and graph 134 that includes the triangular prism which the user sees on the display. The user could generate a triangle by using three fingers to touch display surface 118 at three touch points 120a, 120b, and 120c. The user lifts or pulls up 124 the three fingers substantially perpendicular to the surface at substantially the same time to a distance from display surface 118, and pauses 126 for at least a predetermined time (for example, one second). These movements indicate a 3D gesture input that is associated with extrusion of triangle 122, resulting in a triangular prism having a cross section that corresponds to triangle 122. 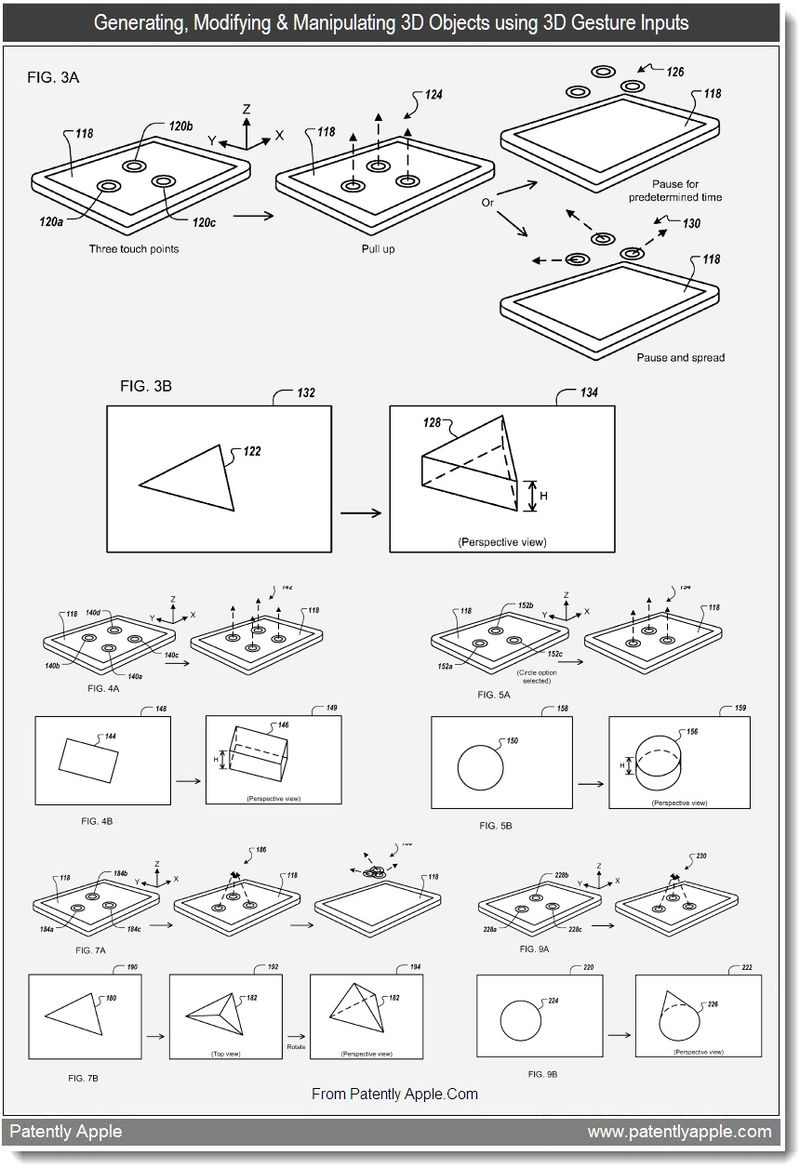 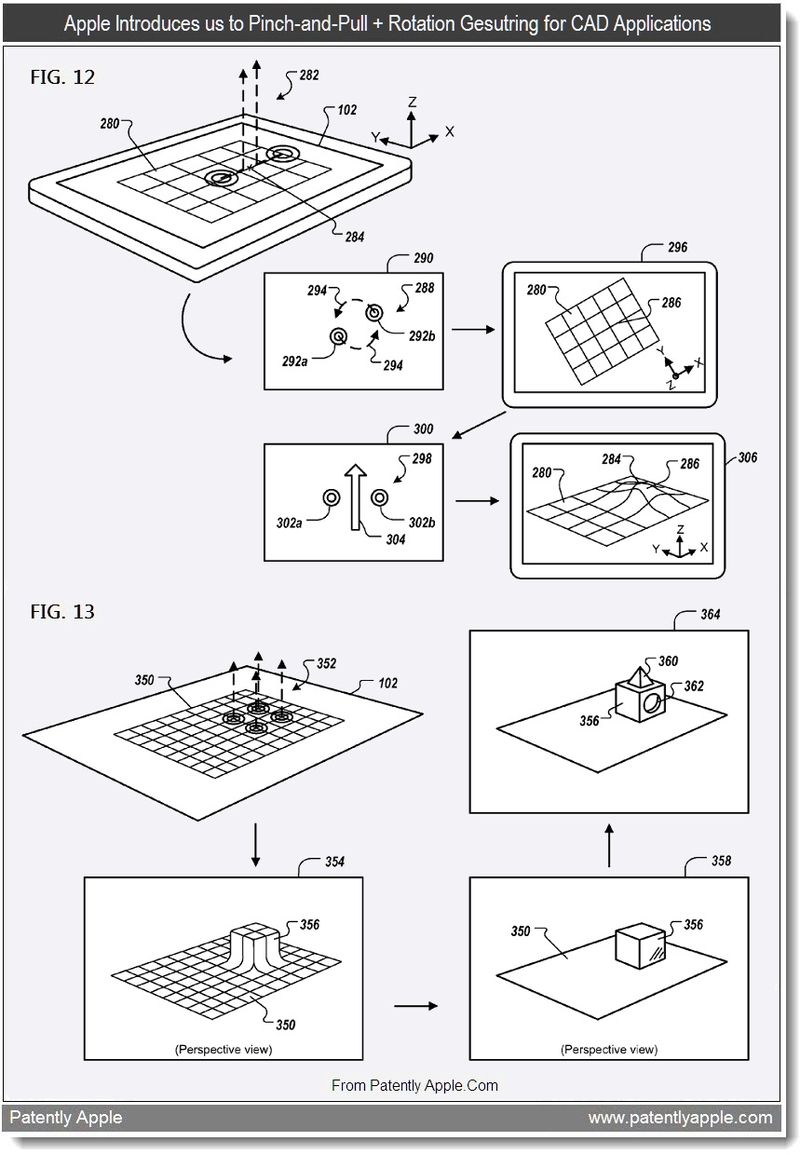 For example, the user could change the distance between the two touch points in the input area while pulling up the fingers in the pinch-and-pull gesture input to modify the cross sectional profile (along the x-y plane) of the raised portion at various heights.

In another aspect of the patent, Apple states that a CAD program may allow the user to apply color and texture to surfaces of objects. The proximity sensor of the device may be used to allow the user to conveniently select different mixtures of color or texture components by adjusting the distances of different fingers relative to the display surface. 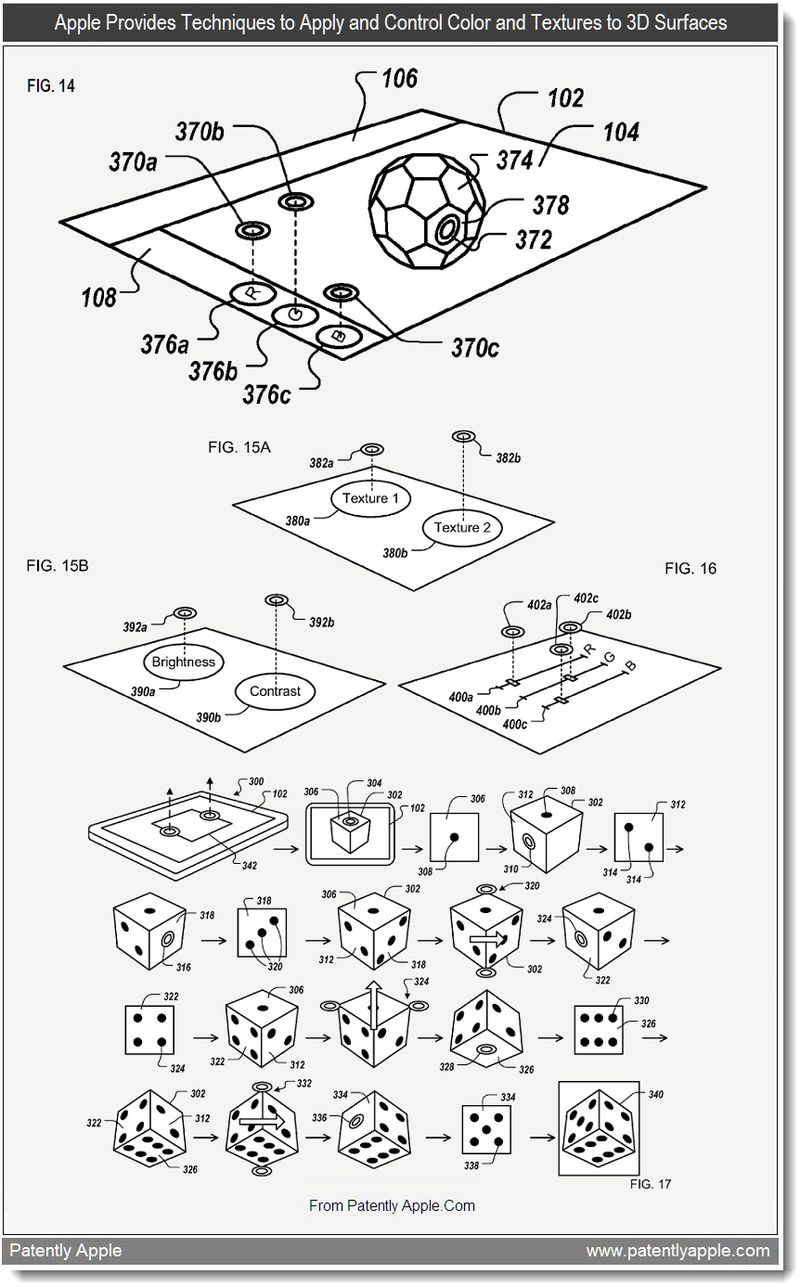 According to Apple, controlling the relative weights or portions of the red, green, and blue colors could also be achieved by using three slide bars with each slide-bar controlling one of the red, green, and blue colors. The advantage of using the technique shown in FIG. 14 is that the area occupied by regions 376a, 376b, and 376c could be made smaller than the area needed for three slide bars. This is useful when the screen size is small, such as when the display is part of a portable device, such as a mobile phone, personal digital assistant, game console, or digital camera.

So it seems Apple have discovered/ developed a way to accurately determine the touch position a considerable distance above the touch panel! Increasing the sensitivity and distance up to 1-2 inches above the panel.
Excellent engineering.
So the future is not only about gestures and touching the panel... It's also what's happening above.

As for this not being 'real' drafting 2D/3D it's simply a matter of time my friends.

@Danny. Most of this patent appears to be for prosumers. Getting gnarly about it Danny is a little foolish.

What bollocks. As a CAD operator and 3D modeler, I don't see how this could actually be considered something a professional could use to produce precision documents.

What a great patent. It is no wonder Apple was so resolved in patenting it's original 2D gestures. They obviously had longer term plans for them that this patent now reveals.

The hardware solution to this will be an interesting one. :)

WoW, Talk about chills. It is about time Apple gave CAD users some love on IOs devices. I feel it is an untapped field.