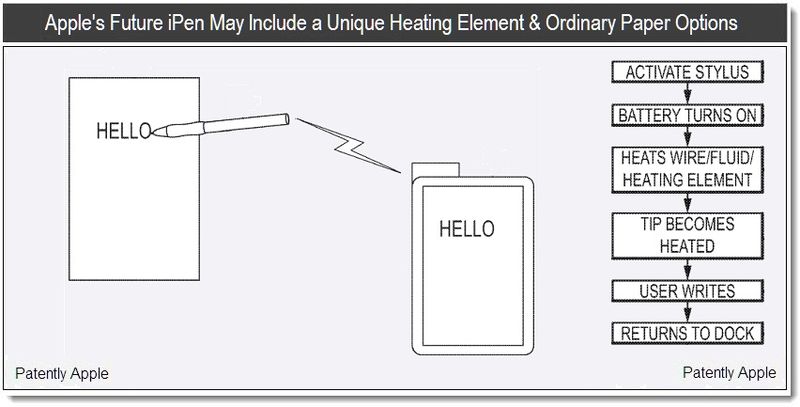 According to our Smart Pen Archives, Apple has now filed more than a dozen smart pen patent applications over the last few years with each one getting more innovative and detailed. One of the most advanced patent applications on smart pens to date was published this past April and one of two patent applications on this subject published today illustrates that Apple is really trying to find a smart pen solution that could also work with ordinary paper. Students and professional doodlers alike could work on ordinary paper and/or notebooks and then simply transfer their data to the device of their choosing when they're done. Other equally innovative ideas that surfaced today include a unique heating element that provides the iPen's tip with smooth action on the display in any temperature and even an integrated iPen dock to charge the Pen's battery. With Apple working on so many advanced iPen options of late, it's evident that the Crazy Ones in Cupertino think that they're closing in on the perfect smart pen.

The touchscreens in some computing devices employ one or more capacitive sensors which allow the screen to recognize when a user's finger is selecting or entering data. However, one problem is that many current styluses operate with resistive touchscreens but do not function with a capacitive device, insofar as a touch of the stylus does not change the capacitance sensed by such a device. Thus, many user enter data into a device having a capacitive touch screen by touching or tapping the screen with a finger. As a user's finger is relatively wide, it may be difficult for the user to enter more complex text and characters, such as characters in Asian languages.

Apple's Solution Part Two: An iPen for Creating Digital Notes on any Paper

This allows a user in one embodiment to keep their computing device like an iPhone stored in a briefcase or pocket and still be able to use the stylus to enter text or drawings into the device. This makes it easy, for example, in a classroom setting for a user to take handwritten notes and simultaneously create a digital version of those notes.

Additionally, in another embodiment, the stylus allows for the user to write on a whiteboard mounted on a wall and simultaneously display what he has written on a computing device.

Part One: The iPen System

In Apple's patent FIG. 1 shown below we see stylus 100 that may be used to write text create drawings and/or characters. The stylus tip may capacitively couple to the device (or to the screen of the device), thereby allowing the device to sense the stylus' presence.

Apple's future iOS device (102) detects and receives the input from the stylus through this capacitive coupling (and optionally via the screen 104), processes the data and then sends the data back to the screen to display. Often, this takes the form of displaying a graphic or differently-colored pixel where input is detected. Thus, as the stylus moves across the screen, it may leave behind a trail much like the ink left by a pen. The iOS device may be any type of device that is able to receive a capacitive input. For example, a touch screen computer, a personal digital assistant, a cellular phone or a smart-phone. 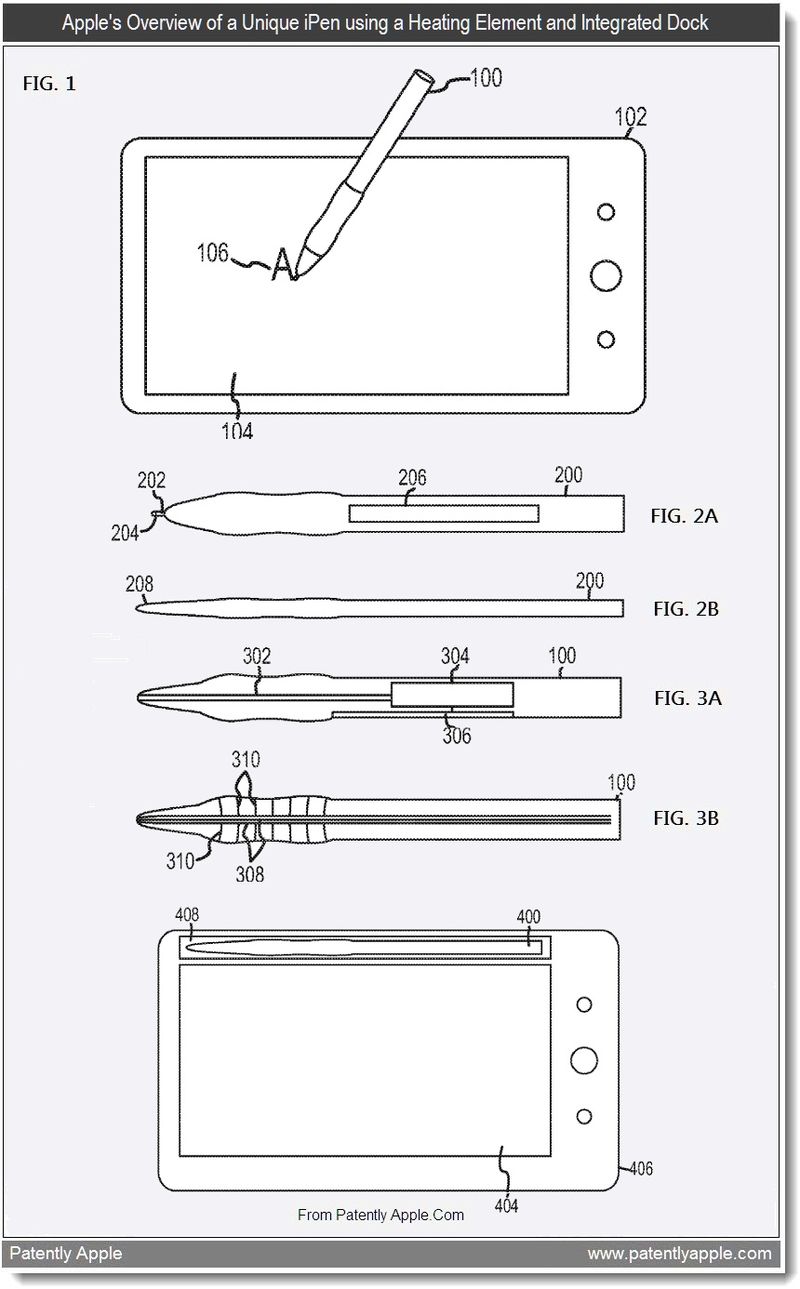 Apple's patent FIG. 2a noted above we see one embodiment the stylus that has a body (200), a tip (202), a grip portion (206) and a tip coating (204). One or more of these parts, such as the grip portion, may be omitted in alternative embodiments. The body of the pen may be made out of any material, such as plastic, metal, fabric, leather or the like or may be a combination of any of the above materials.

The tip of the pen may be a rotating ball fit into a socket in the body or may be a fixed, rounded end. In one embodiment the tip may be made out of any material that has some conductivity, such as copper, aluminum, gold, silver or other metals, graphite or other non-metallic conductors.

We see another stylus embodiment in patent FIG. 2b noted above we that the body and tip are basically formed from one piece. If the material is electrically conductive, then the tip may be electrically coupled to a user when the user gasps the body of the stylus.

And finally on this first iPen system patent, we see Apple's patent FIG. 4 that illustrates an iPen being docked within the iOS device itself to charge the pen's battery. Alternatively, the dock may be separate.

The iPen's dock includes a lock-type mechanism for holding the stylus in place, so that it does not fall out while the computing device is being transported or used. The lock mechanism may be a set of plastic tabs or any similar device capable of holding and easily releasing the stylus. In an alternative embodiment the dock may be an inductive charger, which uses an electromagnetic field to transfer energy between the battery and the dock.

Apple's Solution Part Two: An iPen for Creating Digital Notes on any Paper

Apple's second patent application of the day concerning a next generation smart pen covers a wirelessly communicating stylus. As the stylus moves, one or more accelerometers may track the position and relative motion of a tip of the stylus. The stylus may store the output of the accelerometer(s) as position data for a period of time; position data may be transmitted in bursts to an associated computing device.

The computing device, after receiving the position data, processes the position data and then displays corresponding images on an associated display such as a monitor, television, mobile phone or tablet surface, other computer screen and so on. For example, the device may show a line or trail on a screen that corresponds to the motion of the stylus. This allows the user to simultaneously take notes (or otherwise draw/write,) on a sheet of surface, or even in the air, and create a separate digital copy of his work.

A tip of the stylus may be placed against a surface such that the stylus may move across the surface to create corresponding writing, images, letters and so forth on a display of the computing device. The surface may be any type of surface, such as a sheet of paper, whiteboard, chalkboard, electronic screen or the like.

The System May or May Not Work with Electronic Ink

The surface may or may not be able to display the text depending on properties of both the surface and stylus. For instance the stylus may not include any ink or other medium that is left behind on the surface. In such an embodiment, the text 104 and/or images is typically only displayed on the computing device after the corresponding position data has been transmitted and processed.

In another embodiment, the stylus may include ink, graphite, or another similar substance, such that motion of the stylus across the surface will leave the substance behind. In this manner, the surface may display markings left by the motion of the stylus; these same motions may be shown on a display associated with the computing device once position data is received and processed by the computing device. Apple also notes that the surface may be located horizontally on a desk, positioned vertically on a wall, or the like.

Apple's patent FIG. 2 shown below illustrates the basic make up of one of their designs which includes a body 202, a position sensing device 204, a tip 206, a switch 208, an ink tube 210, a power source 212, a transmitter 214 and memory 216. One or more of these elements may be omitted in certain embodiments. For example, the memory may be omitted in some embodiments and the transmitter may operate continuously when the stylus is in use. 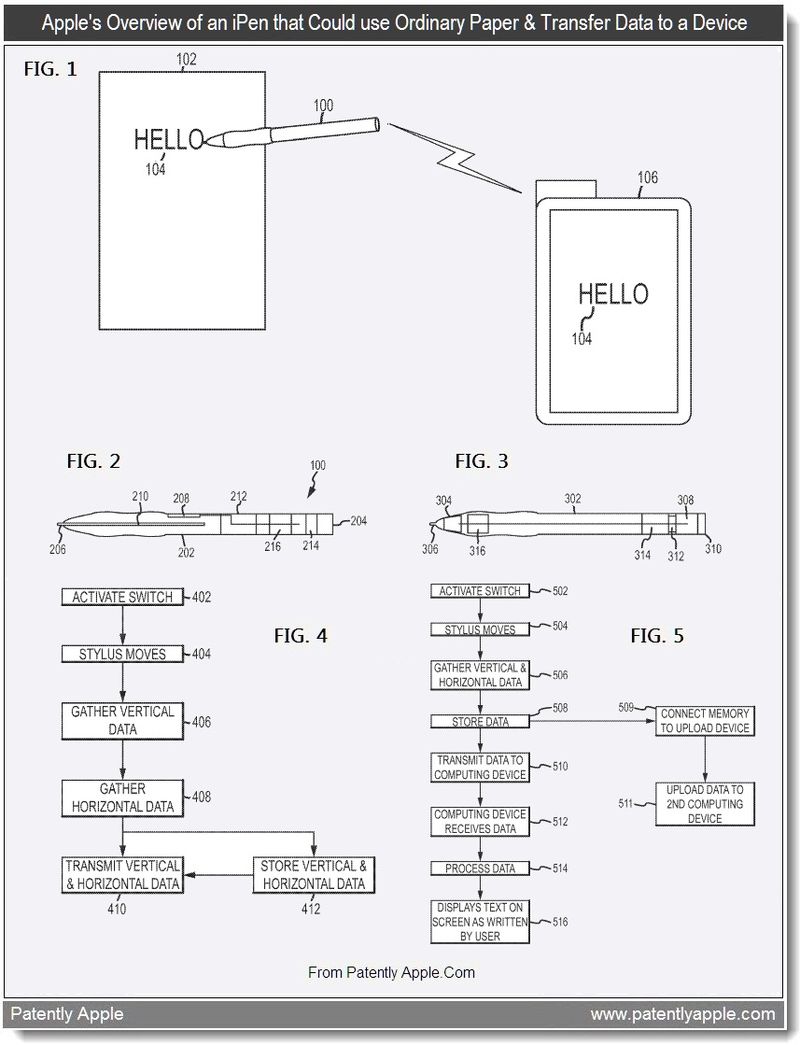 Apple states that if the smart pen or stylus is intended to be used with a sheet of paper, the tip of the pen may be a graphite point, a lead point, or a rolling ball connected to an ink well. This enables the user to draw/write with the stylus as he would with a pencil or ink pen. If, on the other hand, the stylus is designed to interact with an electronic screen such as a tablet personal computer, the tip of the pen may be a sphere or partial sphere made of metal, plastic, an elastomer impregnated with metallic flecks to provide capacitance, and so on. Interestingly, Apple is considering integrating a switch on the smart pen that would permit the user to rotate between the various tips noted above. Meaning it could act like a smart ballpoint pen when you're using paper and then with a click of switch that would allow you to use your iPen with an iOS device: Very nice.