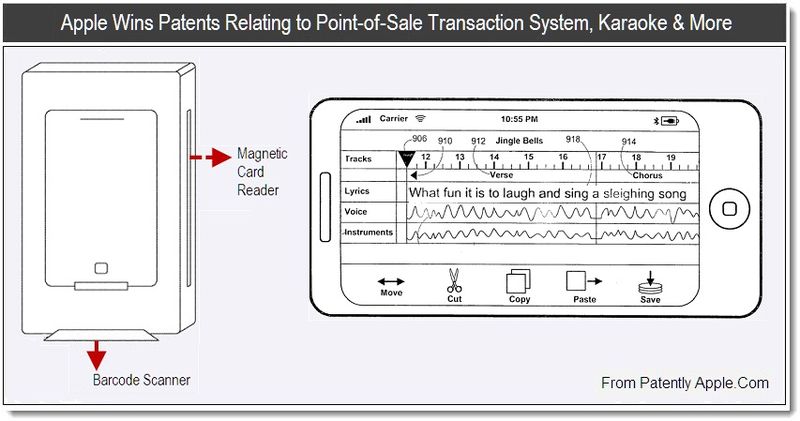 The US Patent and Trademark Office officially published a series of 14 newly granted patents for Apple Inc. today. In our first granted patent report of the day we focus on three specific patents. The first relates to a sophisticated roaming point-of-sale system that Apple may use in their Apple Stores, the second is a patent relating to a Karaoke system that few have seen and the last relates to Apple's wireless keyboard design.

Although Apple sells credit card readers for the iPhone, it appears that they have their own sophisticated system on-tap. When I've been to the Apple Store I've either been served at a stationary terminal or served by a handheld scanner that was fairly bulky. Today's granted patent appears to be proposing a slicker in-store multi-point transactions system that incorporates magnetic card and barcode readers as noted below. 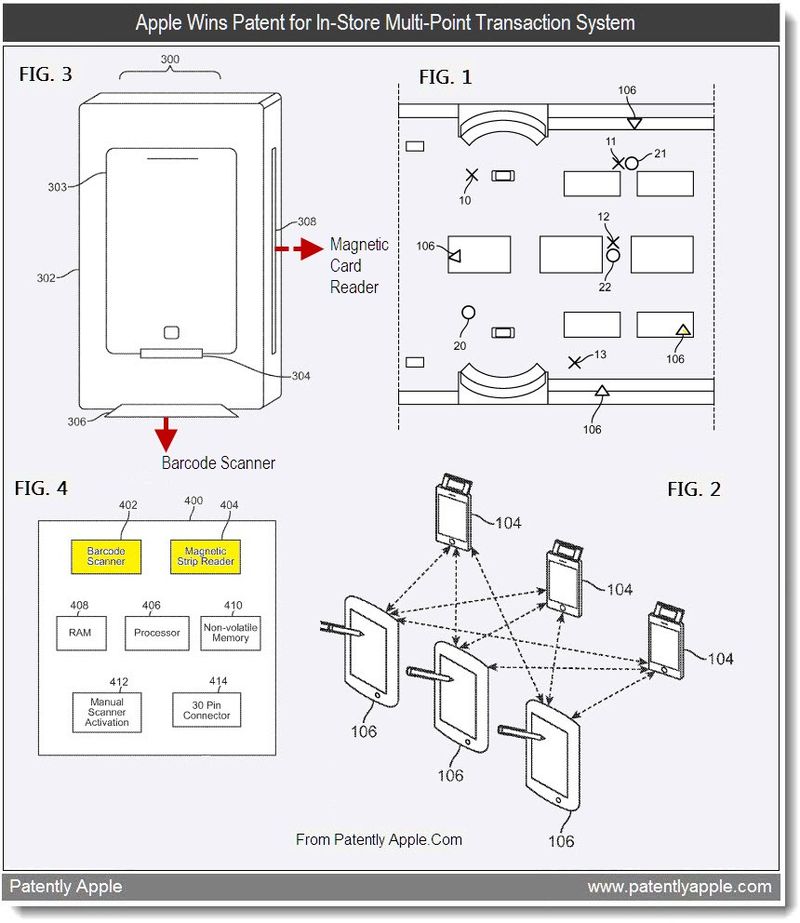 The patent clarifies that although the scanning device may include a barcode scanner and magnetic card reader, in other embodiments, both readers may actually be physically distinct devices.

Apple's patent claims cover a method for operating a roaming point-of-sale system, a physical hardware product, a system and method of completing a retails sales transaction.

Apple credits Khawaja Shams as the sole inventor of Granted Patent 7,971,782 originally filed in Q1 2010. It's interesting to note that this recent patent illustrates the use of a stylus – likely used to receive a customer's signature.

Apple Granted Patent for a Real-Time Feedback System for Karaoke

Apple has been granted a patent that generally relates to multi-media systems, and more particularly, to systems and methods for assisting people performing karaoke by providing real-time feedback to the user during the playing of the karaoke music track. 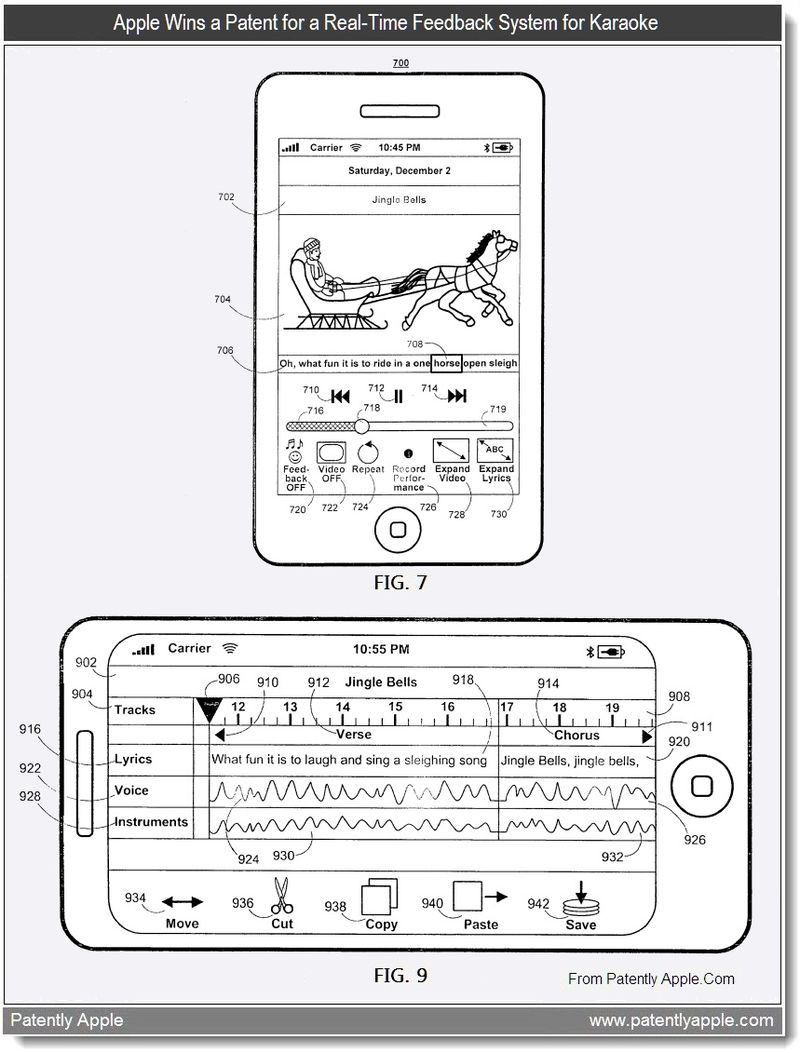 Apple's patent covers systems and methods for providing real-time feedback to karaoke users while they are singing karaoke. The system generally relates to receiving the user's vocals, determining whether the user is singing on key/pitch and providing real-time feedback to the user while the karaoke song is being sung. The feedback will be positive feedback if user is on key/pitch and it will be negative feedback if user is off key/pitch. For example, the feedback signal if the user is singing too low can be an exaggerated low signal of the user's own voice. This will encourage the user to sing at a higher pitch.

Although you could find tunes designed for Karaoke mode on your iOS devices on Apple's iTunes, Apple doesn't exactly present this as an option when actually purchasing a tune on iTunes. Although the interface examples noted above in Apple's patent figures are very interesting – I think that the vast majority of us have never actually seen or used this feature. Have you? If so, send in a comment about your experience with it.

Apple credits Peter Mahowald as the sole inventor of Granted Patent 7,973,230. For an overview of popular artists having tunes ready for Karaoke, see this list. 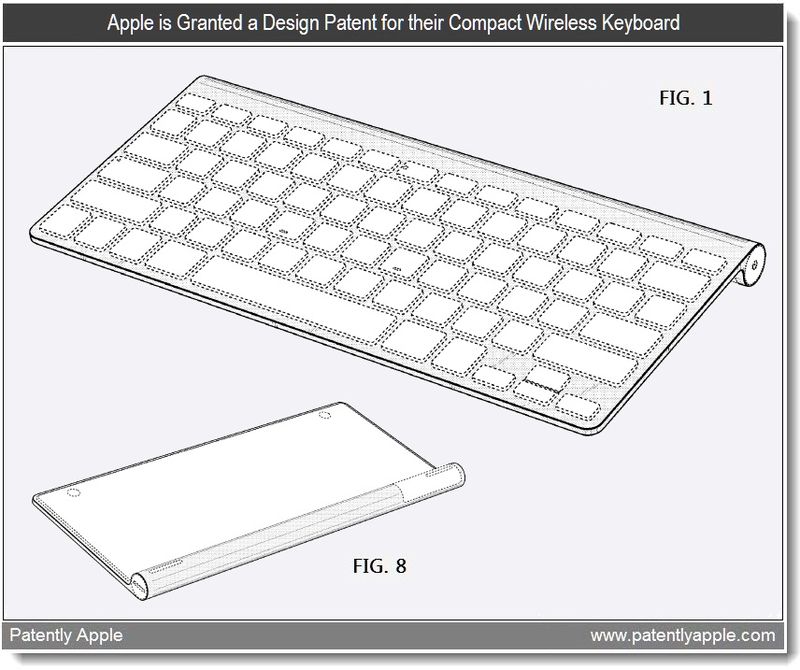 In Other IP News: Apple has filed for the "Smart Cover" trademark in the US. The specifics of this news could be found in our updated report found here. Elsewhere, Foss Patents reports today that "August 5 hearing on preliminary injunction against Samsung too early, judge tells Apple."