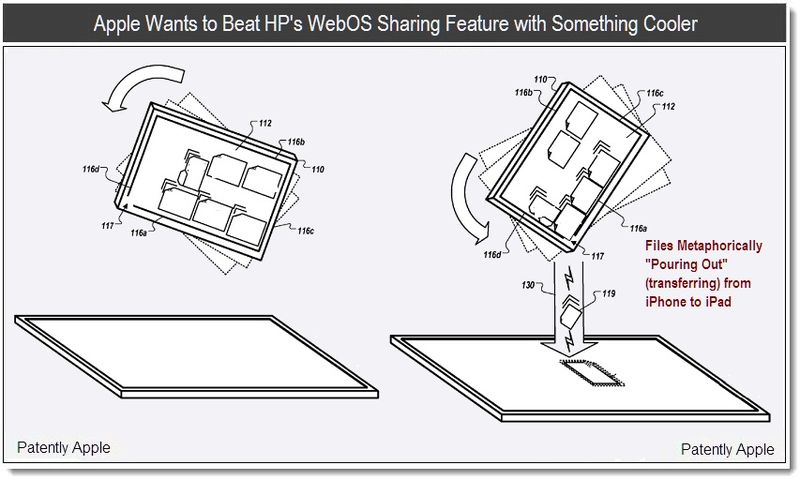 When HP first introduced the TouchPad's "Touch to Share" feature earlier this year, fans and industry pundits alike applauded them for their innovation. Well, it appears that Apple has been working on something similar for about 18 months now. Of course in typical Apple fashion, the concepts envisioned appear to be far more creative as they implement gesturing with Physics Metaphors. In one example, as noted in our cover graphic, you'll be able to "pour out" files from one device to another in a manner that mimics that of pouring water. Apple lists a host of other examples that include sound effects. One such example includes an iPhone sucking up files from an iPad with the sound effect of a vacuum cleaner. While this newly proposed feature will certainly apply to all of Apple's hardware, it will also eventually apply to other devices such as televisions, whiteboards, projectors and more. Whether this ends up being a spin-off of Apple's forthcoming "AirDrop" feature or not remains to be seen. For now, it's Apple adding some badly needed personality to the boring process of file sharing.

Conventional personal computers include operating systems that often provide a virtual "desktop" metaphor where users could manipulate and organize various objects. This metaphor is easily understood by users because it is intuitive, and like the "pouring" act described above, relates to their real world, physical environment. Modern computing devices, such as smart phones, often provide a large variety of applications. Some of these applications, however, provide interfaces that lack an equivalent of the "desktop" metaphor and as a result are more difficult to comprehend by the average user.

In some implementations, in response to an intuitive, gesture made on a touch sensitive surface of a first device or by physically moving the device, an object could be transferred or broadcast to other devices or a network resource based on a direction, velocity or speed of the gesture.

The first example illustrates an iPhone transferring files to an iPad and of course the reverse could be true as well. The iPhone's Interface is shown displaying a collection of graphical objects (114a-114f) which are in this case file icons representing stored files. In some implementations, the user could select one or more files for transfer to one or more devices by placing the files into a transfer state. 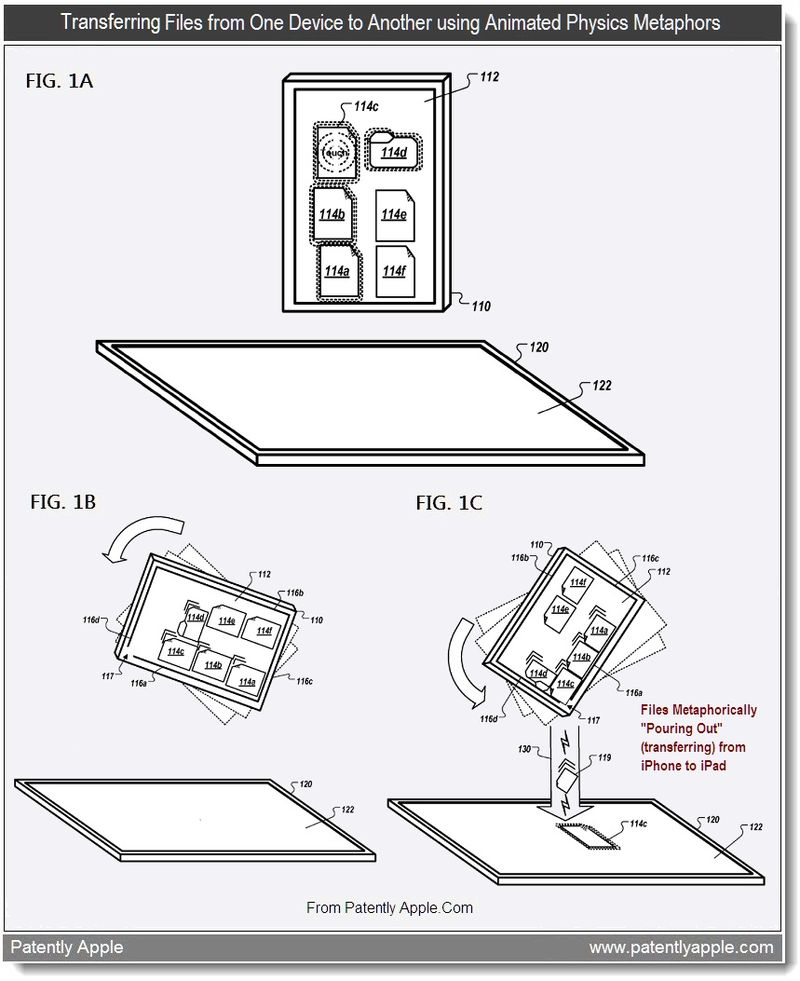 Apple's patent FIG. 1B illustrates an iPhone (device 110) in motion relative to the iPad (device 120). Here, the user has rotated their iPhone above the iPad's interface (122) in a manner similar to tipping a glass of water. This angular motion can be detected by one or more onboard motion sensors.

As shown in FIG. 1B, detached objects 114a-114d could be animated to simulate the effect of gravity by "sliding" toward the lowermost portion of interface 112 as device 110 is rotated. The animation of the objects creates the appearance that the objects have mass and are reacting to forces of a real world, physical environment. In FIG. 1C, we see that the iPad could interpret the rotation of the iPhone as a pouring motion as an indication of the user's intent to transfer the files represented by selected objects 114a-114d.

Upon determining that the user of the iPhone intends to transfer the files, the iPhone (device 110) determines if the iPad (device 120) is present and available to receive the files. After a link is established between the two devices by Bluetooth or RFID and authenticated, the iPhone could request that the iPad accept a file transfer.

Apple's patent spends a lot of time describing various animated physics metaphors that would have the iOS device's interface react differently depending on the metaphor. Apple describes that the appearance of the interface could react to gravity, friction or drag, momentum, torque, acceleration, centripetal forces or any other force found in the real-world physical environment. The rate at which each object moves on an interface could be based on the size or "mass" of the file represented by the object. Larger files that have more "mass" could have their object animated to move slower in the interface while smaller files that have less "mass" could have their object animated to move faster in the interface.

In some implementations, a file could be detached from the interface so that it appears to "float" on in the interface. In Patent FIG. 1C we see that the files are edging to a corner of the iPhone. The patent states that there could be an effect that the files are actually going down a drain or sand flowing through an hourglass or a Genie being pulled out of a bottle. It could even appear like the files are dissolving like a tablet in water which could be accompanied by sound effects like liquid pouring, a tablet fizzing, gas traveling through a valve and believe it or not, they even point to the sound of a teleporter playing – ha – Beam me up Scotty!

On the flipside, you don't want all of your files falling out of your system and so Apple has dreamed up resistance fields when two or more devices come together. For example, the user may have to flick graphical objects with a velocity sufficient to overcome a simulated repelling force at the edge of the devices interface. Some examples of repelling forces include but are not limited to gravity and friction provided by a speed bump or wall of a bubble, where an object either overcomes the repelling force by having sufficient speed to rollover the bump or sufficient speed to break through the bubble wall or has insufficient speed and rolls or bounces back. So in some cases you'll want to apply a pouring effect if you're transferring a lot of files and other times you'll want the resistance field/repelling force to be more guarded so that only what you want transferred leaves your interface. 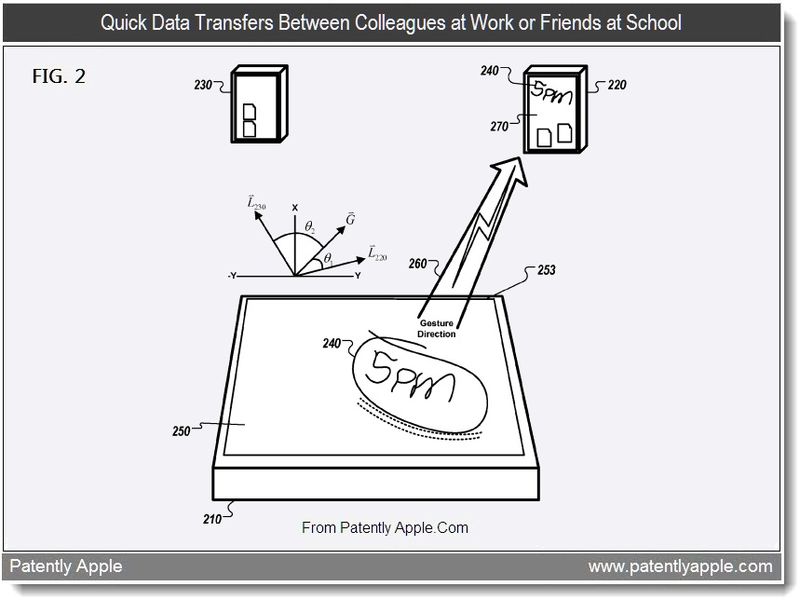 Before receiving the data transfer request, the iPad could scan the entire conference room or class for the presence of other available iOS devices. In this example, devices 220 and 230 are detected. If communication has not been established, the iPad could establish communication with other devices. The system, if all else fails, could be set up manually for transferring files.

Apple's patent FIG. 3 illustrates initiation of a data broadcast from a device to multiple devices in response to a physical gesture. Devices 310, 320, 325, 330 are located in proximity to each other. Devices 310, 320, 325, 330 could be a computer enabled display device, such as an electronic tablet, computer monitor, projection screen, electronic whiteboard, teleconferencing screen, television, or other type of device that could display information. 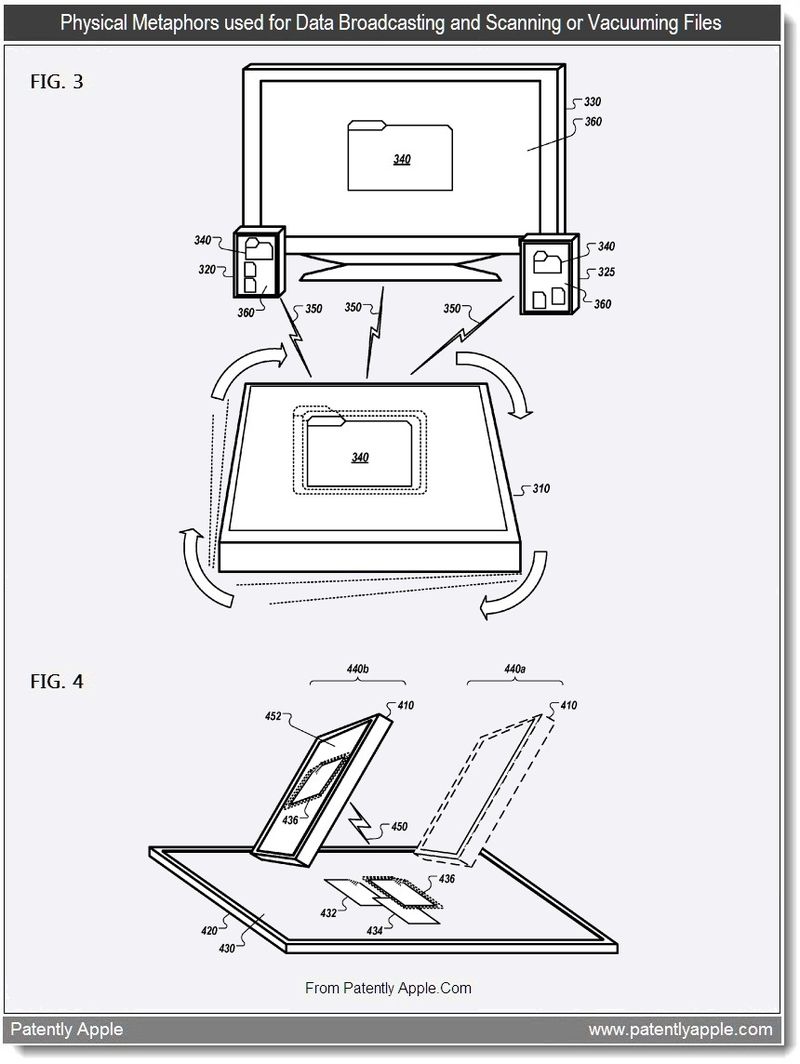 In the example shown above, the user has selected graphical object 340 (a file icon) to indicate an intention to perform a data transfer action. Device 310 is also shown in a rotational or sweeping motion due to a user performing a clockwise (or counterclockwise) rotational or sweeping gesture that emulates a toss of a Frisbee. Motion sensors onboard device 310 senses this physical gesture and interprets it to indicate the user's intent to broadcast data represented by graphical object 340 to devices 320, 320, 325, 330.

The Vacuum Metaphor: Suck up Those Files!

Apple's patent FIG. 4 illustrates a data transfer between two devices in response to intuitive, physical gestures. In the example shown, the user intends to request that data corresponding to icon 436 be transferred from an iPad (device 420) to an iPhone (device 410). The user indicates an intent to transfer data by placing the iPhone in position and orientation (440a) relative to the iPad (device 420) and then moving the iPhone across display of the iPad. In some implementations, the gesture just described could be performed with a metaphor for the user holding and using the iPhone as a "vacuum" sucking up the files. Okay, that was a funny image.

@ John. That's probably why there's so many German engineers coming to America. They want their ideas protected and maybe even make a few bucks for their work. What a concept.

File sharing would be much easier if apple devices would just allow you to plug in a usb cable and see the device as a drive which you could copy files to and from,But no, you need iTunes or something and then you need to convert your content because heaven forbid that Apple would support multiple file formats.

A pouring motion wouldn't be allowed in Europe as it would be considered a "usability" thing which isn't patentable.