Apple Reinvents How 3D Displays Could One Day Deliver Content 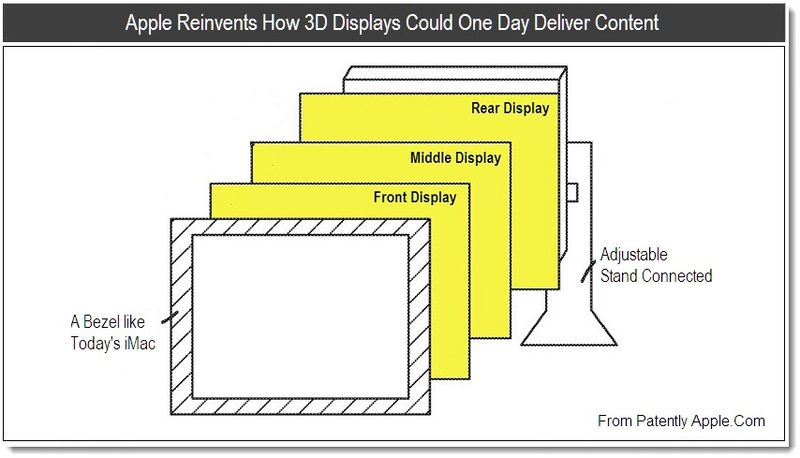 When I think of quality 3D content, one of the first companies that comes to mind is Pixar whose wondrous works have dazzled millions worldwide and made us laugh. It was Steve Jobs who acquired a low key 3D software tool developer company and turned it into a 3D animation powerhouse that finally drove Disney to acquire them in 2006. So do I have faith in Apple being able to reinvent 3D for computer displays and televisions in the future? Duh …Yes, of course – and the good news on this front is that a recent patent application reveals one of the many ways that Apple is preparing to deliver this next generation entertainment beast. Although Apple's patent application goes out of its way to never use the words TV or television, they do describe the shortcomings of wearing 3D polarized glasses in context with a display. If that's not describing a future 3D TV application - then I don't know what is. Then again, it's not only about entertainment anyways. It's also about a future 3D version of OS X or perhaps even iOS. And if you follow Apple's patent history, then you know that such advancements in delivering truer 3D imagery will eventually spill over to other professional fields such as medical, aerospace, gaming and far beyond.

Currently, the perception of depth of a three-dimensional image may be created by computer graphics that are used to enhance a displayed two-dimensional image, such as through shading or brightness effects, or by the creation of a stereoscopic image.

Many such techniques are imperfect. For example, adjusting the brightness or shading of an image may enhance the realism of a two-dimensional image, but could only enhance the perceived depth of a flat image to a limited extent.

For those interested in every variation of Apple's latest invention, we'll provide you with the appropriate patent number at the end of this report so that you could further research this document. But in short, Apple is basically describing a next generation smart 3D display system. The system consists of three or more separate displays that are encased in one enclosure like an iMac. The displays are in close proximity with each other and are controlled by their own independent GPU so as to deliver different pieces of an image that will produce a genuine 3D-like image without the need of polarized glasses. Finally someone is thinking outside the box.

Apple's patent FIG 1B presents the three display panels as patent points numbers 101, 103 and 105 which could be spaced apart by a preset distance D1, D2, such as between approximately 1-2 mm, to create the perception of depth for a viewer. In particular, the distance D1, D2 between the display panels may provide a depth effect so that the human eye may discern that images displayed on the rear panel are at a further distance from the viewer than images displayed on the front and middle panels.

The Distance between the Layered Displays Could be Altered 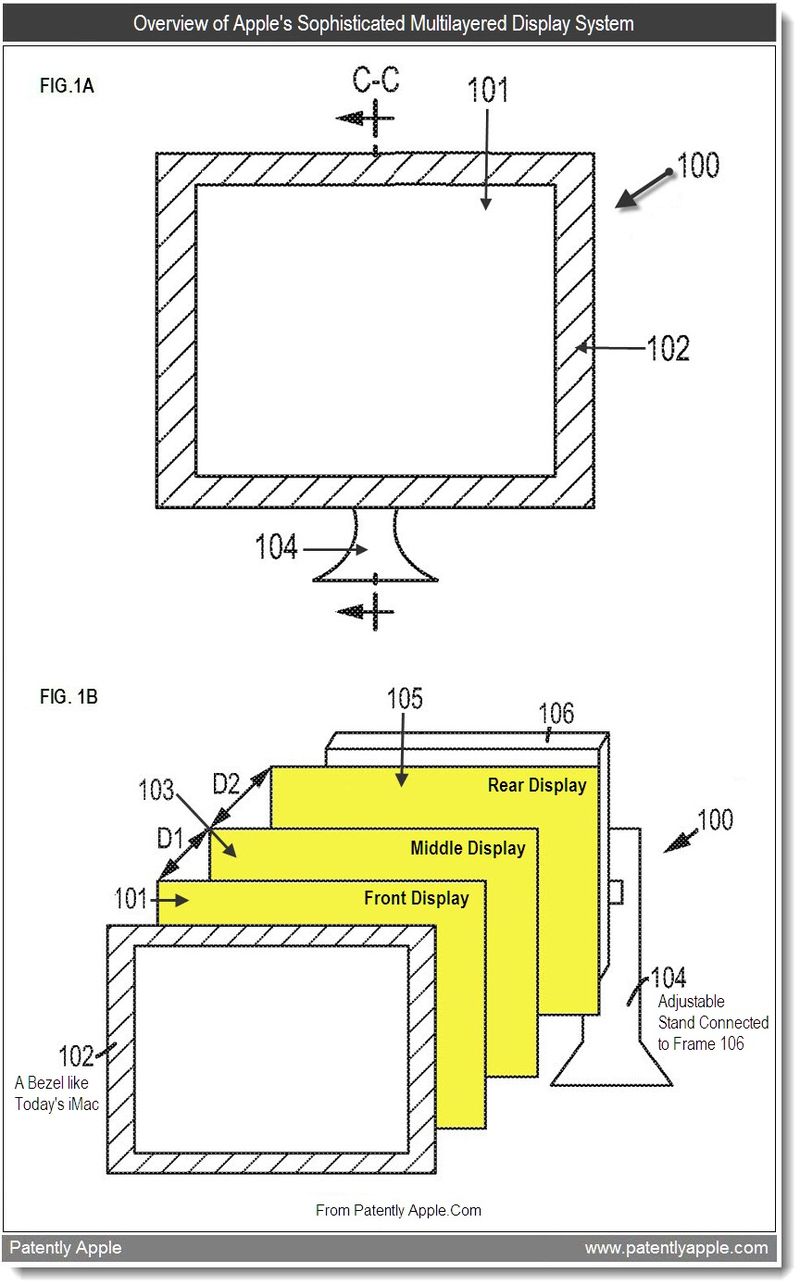 Differing Display Thickness is another Method of Creating Visual Depth

Apple further states that the perception of depth, or actual depth, may be created by using thicker display panels, rather than varying the spacing between the panels. For example, the depth effect may be increased or decreased by using thicker or thinner panels. In one embodiment, the front and middle display panels 101, 103 may be OLEDs that are attached to a transparent substrate layer having a desired thickness and positioned either in front of or behind the corresponding OLED, thereby increasing the perceived depth of the images displayed on the panels. The thickness of the panels of the display device may vary. For example, the front panel may be thicker or thinner than the middle and/or rear panels. Other embodiments may vary perceived or actual depth through a combination of panel spacing and panel thickness.

Certain OLED panels are partially transparent as opposed to fully transparent. Embodiments employing such partially transparent OLED panels may increase the brightness and/or intensity of graphics and/or other data displayed on the middle and back screens to account for the partial opacity and possible light-filter effects of the front and middle panels. In such embodiments, the brightness and/or color intensity of graphics displayed on the middle panel may be enhanced or increased by a percentage or amount to appear, to a user, to have the same optical qualities as graphics displayed on the front panel. Likewise, graphics on a rear panel may be even further enhanced than those on a middle panel. Thus, the graphical enhancement may at least partially offset or overcome the filtering effects of the semi-transparent OLED panels in front of the panel displaying the enhanced graphic.

Although Apple delves into every aspect of patent FIGS. 2 and 3 illustrated below, the brains of the system includes an advanced GPU layout which could consist of a single GPU as noted in FIG.2 or multiple GPUs as presented in FIG. 3. Apple also states that the system's microprocessor could be any type of processor including a single or multi-chip CPU configuration, an SoC (a system-on-a-chip), and could be an 8-bit, 16-bit, 32-bit, 64-bit, or multicore design. And of course, the brain of any system must be intimately connected to Apple's OS. 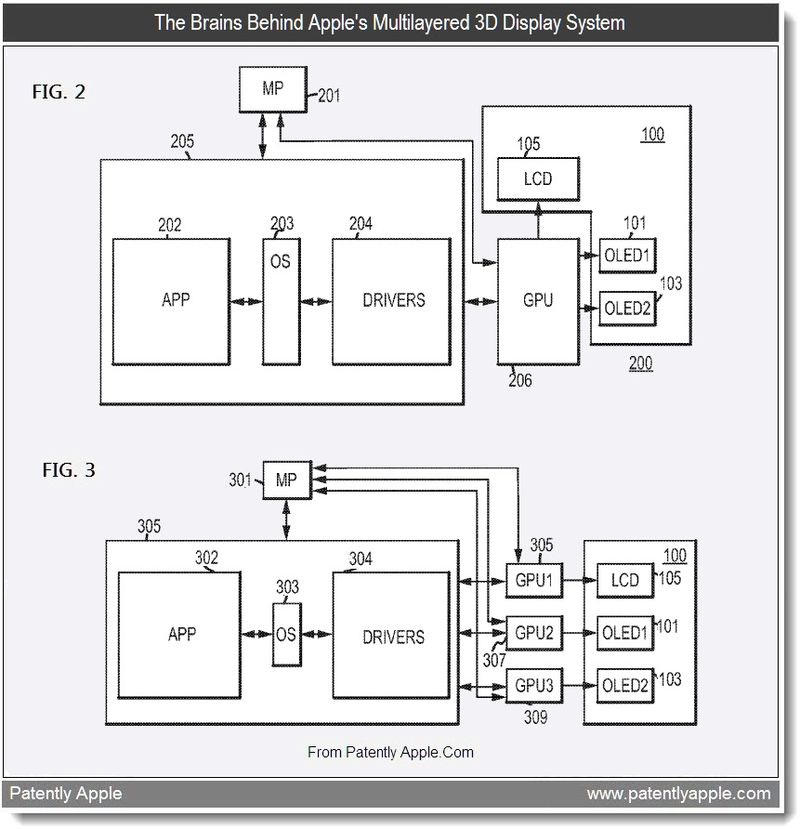 According to Apple's sole inventor Pete Mahowald, the operating system (noted as both patent points 203 and 303 noted in our graphic above) may be programmed to separate certain constituent graphical elements of itself and/or the application software (202) with respect to the three panels noted above. That is, the operating system (or a specialized driver) may break a two-dimensional display into separate elements and assign each such element to a layer of the display device.

Towards the end of Apple's patent, they present an example of a 3D Desktop Background whereby the background image may be an unmoving PNG or JPEG image, or, in other embodiments, may include a video clip or animation. In certain embodiments, the background image may be split into separate elements and displayed across the various panels of the display. For example, if the background image shows a tree and a bird in flight, the bird and tree may be defined as separate elements. The bird may then be displayed on the front or middle panel while the tree is shown on the rear panel. In this manner, three dimensionality of the background image may likewise be achieved or simulated. It should be noted that any graphic may be separated and displayed in such a fashion. By placing certain portions of a graphic on a panel nearer the user than other portions, aspects of the graphic may be emphasized to a user.

3D Patents: A Trend is Forming

Apple's multilayered 3D display system in and of itself is fascinating and powerful in that the end result could mean playing 3D TV, movie and gaming content with truer 3D realism in the future. It also could assist surgeons in viewing sophisticated 3D imagery associated with digital X-rays, assist 3D gaming developers, CAD users and others while providing a new level of visual excitement to a future version of OS X.

It's very powerful in that this current invention isn't a standalone idea. Apple's research teams  have been working on advanced 3D interfaces for some time now. In April 2010 we learned of Apple's unique 3D Ambient Light Feature. In May 2010 we learned of Apple's Extraordinary Multifunctional 3D Widgets and in January 2010 Apple revealed how 3D could be coming to iOS devices as well. When you combine these varying Apple inventions along with Apple's head tracking proposal of 2009 – we're able to see the making of something extraordinary.

While I'd love to see this technology surface next year, I don't think that this is short term thinking at Apple. Reengineering OS X for 3D is going to take a lot of work. Then again, nothing stops Apple from slowly introducing various 3D elements into the mix to test out some of their inventions. It could be as simple as providing new 3D desktop background options to cause a stir.

The good news is that earlier this month Apple revealed that they were working on a new 3D CAD app that could work on a future iPad – and so Apple's work is slowly turning into a real trend that is gaining momentum in Apple's labs. And with rumors of Apple entering the TV market in the coming years, 3D content and advanced user interaction on tap could once again give Apple another revolutionary product that we could look forward to.

The company PureDepth already owns some patents for this 3D tech and has even built multi-layered displays currently used for 3D slot machines in casinos. That's true Apple would have the power to mobilize manufacturers to mass produce components for a unique multilayered 3D retina display... very exciting!

The connections Apple has with screen manufacturers should surely put them in a good position if they wanted to - would be a boon to require multilayered displays! Till then, retina level iPads, and i'd imagine within a year increased resolution monitors will be coming.