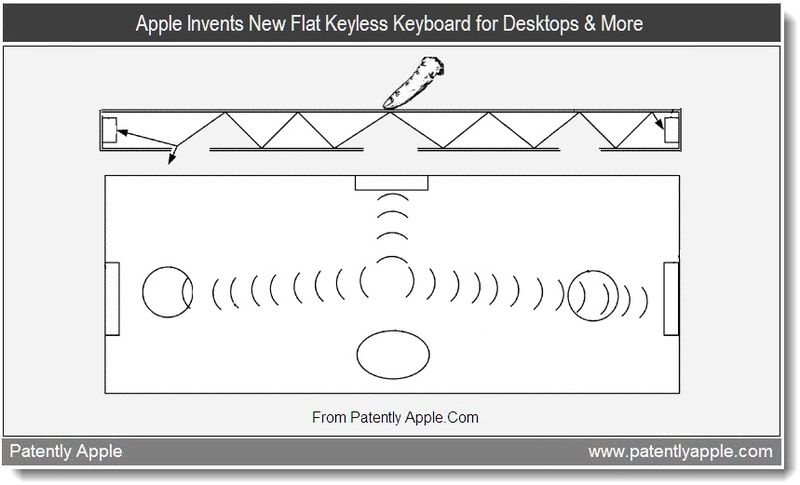 Late last week the US Patent & Trademark Office published a patent application from Apple that revealed yet another take on a possible future virtual keyboard for the iMac and other devices. Apple's first major patent concerning larger virtual keyboards surfaced in 2009. Then in 2011a wave of major virtual keyboard patents surfaced that illustrated the depth of Apple's research in this area. In early January Patently Apple posted a report titled "Apple gets closer to a Virtual Keyboard for the iMac," and later that month we posted a second report titled "Apple Pushes Research into Motion Keyboards for MacBooks." In May, Apple disclosed the invention of an "Advanced Air Feedback System" and last week Apple revealed their fifth major effort into keyless keyboards by disclosing their new piezo-based acoustic and capacitive detection system which includes a very cool glass based keyboard concept that may be a winner.

The General Problem to Solve

Apple lays out the general problem to solve by stating that in general, touch-sensitive surface or related input devices may be less reliable in determining a pressed command or intended input when compared with a traditional mechanical keyboard. For example, some touch screens often require that a user tap on the screen several times before detecting the command. Further, touch-sensitive surface input devices often fail to distinguish between when a user is merely resting on the surface of the device or actively selecting a letter or other input.

Apple's solution overview begins by stating that in some instances, an input device for a computing system made of mechanical buttons or switches may not be feasible. For example, it may be useful to provide an input device that is flat and has few to no moving pieces, as this may yield a more robust product. One such device is a touch-based input device for a computing system. The descriptions of the embodiments in Apple's patent application are primarily in relation to a flat surface keyboard – though not limited to such.

One embodiment of the present invention may take the form of a flat surface input device with a keyboard interface. Apple's patent FIG. 2 shown below illustrates a top view of a flat-surface keyboard input device utilizing acoustic pulse recognition to detect a tap on the surface of the keyboard.

A flat surface keyboard of the present invention may take the form of at least one input surface (202) with some type of indicator on the surface for each of the input characters of the keyboard. The input surface may be constructed from any solid material, such as metal, glass, plastic, and so on. In a metal or plastic embodiment, the keys may be machined, stamped or micro-perforated into the input surface such that a user may press or tap on a key to provide a corresponding input to the computing system.

Glass Keyboard with Graphics on a Display Screen Below

In a glass embodiment, the keys may be painted on the surface or provided as graphics on a display screen located below the glass surface. The flat surface keyboard includes an indication of a standard computer keyboard layout including space bar, enter and function keys and so on.

Further, the flat surface keyboard may also include a haptic or tactile feedback mechanism that is activated when the user presses or taps on a key of the keyboard. In general, the haptic response may provide a force, vibration and/or motion to the user's fingers or hands in response to the user pressing on the keyboard surface.

Acoustic pulse recognition based flat keyboards could be used with computers such as the iMac but could also be implemented with in-vehicle systems, other iOS devices or devices relating to medical and financial fields. 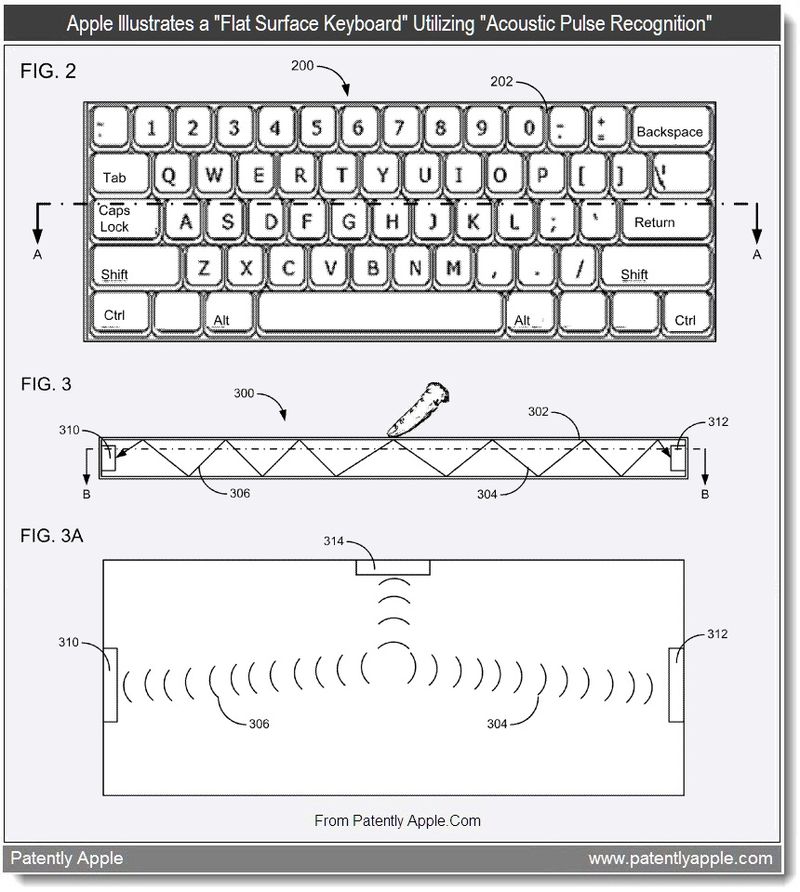 Other Sensors Could Be Utilized

Apple also describes the combination of sensors used to perform normal keyboard functions like when you're capitalizing a letter. To match this keyboard function on a flat keyboard, Apple states that they'll combine piezo and capacitive sensors. This combination also helps to distinguish between an accidental touch of the keyboard surface and a deliberate one.

Three other patent applications that surfaced last week (20110175826, 20110179372 and 20110179373) cover the technology that is currently used in Apple's virtual keyboard for iOS devices. Bradford Moore, who was listed as inventor on all of these new patents, also worked on other patent relating to virtual keyboards in 2010. One of the screenshots of interest illustrates Apple considering the inclusion of another virtual keyboard-layer for emoticons. I'm sure for patent sleuths there's still more to discover if this happens to be a topic of interest. 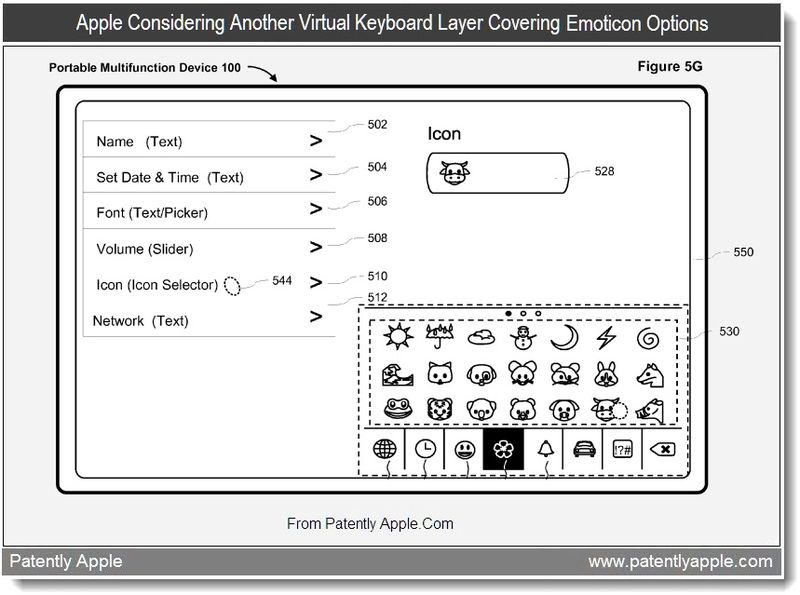 @wayne. You missed the point. Apple already has a virutal keyboard on the iPad etc. But that, like the example you present, is good for simple texting or email. For production work on Word or in Apple's Pages, you need to have a real keyboard to get anything done. Apple's patent pending technology aims to mimic the "feel" of a keyboard without the physical keys via air systems and acoustic pulse techniques. It's not about gimmickery and simple vibrations when you touch a key. It's like saying an old windows tablet is like an iPad. If you think that, then you're missing the point, by a country mile.

So what is this then, its a keyless keyboard.

this is a fantastic concept, you know why i like apple they build on ideas but regardless they satisfy the customers with sensational and quality product, the new name i would call apple is , Apple the perfectionist.