New Stabilizing Technology May be Coming to FaceTime Videoconferencing

On June 16, the US Patent & Trademark Office published a patent application from Apple that reveals one of the next chapters for Apple's FaceTime videoconferencing application. Simply put, Apple understands that in this mobile world that we're now living in, FaceTime videoconferencing won't always take place on your nice stable iMac desktop but rather on the go. Apple's patent discusses fine tuning FaceTime videoconferencing so as to take advantage of face recognition software that is able to figure out where the center of your mobile display is while you're moving about. In theory it sounds interesting, but it's one of those features that you're going to have to test out yourself when it arrives – just to see if Apple has hit the mark on this one. Stabilizing video is going to be important feature going forward. And if you've ever shot video on an iOS device before, then you're fully aware that we need better stabilization technology badly!

To improve image stability, a user may mount his device on a stable surface, e.g., on top of a desk. However, mounting the device at a fixed location reduces the mobility of the user, as he cannot easily move outside the range of the camera during a video chat session. Further, even if the device is mounted at a fixed location and the user is sitting during a video chat session, the image captured by the device can still be degraded when the user moves his face or body. In some scenarios, the user may post-process the video captured by the device. However, post-processing techniques are not suitable for a live video chat.

In one scenario, the video processor calculates a motion vector as the difference between the detected position of the face in a current image frame and a reference position of the face in a previous image frame. The motion vector indicates the direction and the amount of face movement relative to the reference position. The video processor adjusts the size of the boundary area to be cropped based on the motion vector.

In another scenario, the boundary area to be cropped from an image frame comprises a top margin, a bottom margin, a right margin and a left margin. The video processor determines the size of the margins in each direction to substantially center the image of the face in the output video. In another embodiment, the handheld communication device provides one or more options for the user to select a fixed position in the output frames of the output video as the position of the face. The selectable fixed location may be anywhere in the output frames as desired by the user. 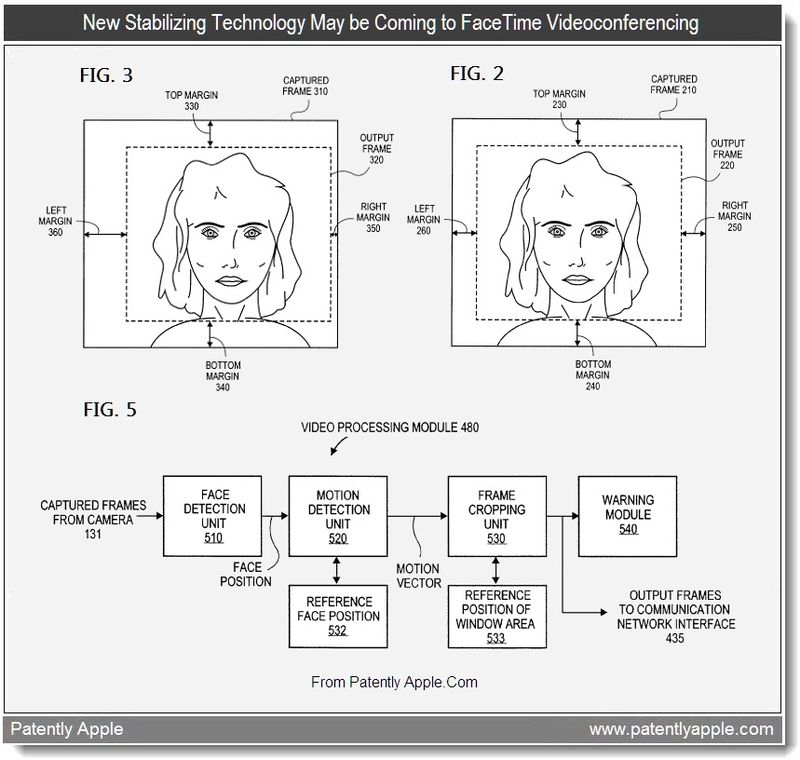 In a final scenario, when the amount of face movement exceeds the available margin in any of the top, bottom, right and left directions, the handheld communication device generates a visual or audio warning to alert the user. When this occurs, the user can adjust the position of the handheld communication device or adjust the position of the face, to, for example, re-center the face image.