Future iPads to Implement Vicinity Sensors for Enterprise Use

On June 30, 2011, the US Patent & Trademark Office published a patent application from Apple that reveals various new advanced vicinity sensors coming to future iPads. Apple's patent makes it clear that vicinity sensors will be a tool that will fit into the enterprise quite nicely. New vicinity sensors coming to the iPad include RFID, Infrared and Ultrasonic. The latter utilizes advanced 3D scanning and imaging capablilities. The advanced sensors are designed to locate office equipment anywhere within an enterprise and could actually devise floor plans to properly located devices. Users will also be able to drag document icons to the printer or videos and/or art to a video projector for a presentation using Keynote or Power Point. Without a doubt, Apple is aiming to further advance the iPad into the enterprise.

Network-enabled electronic devices commonly communicate instantly over great distances. A network connection allows these devices to be in communicative proximity. That is, the devices communicate generally without reference to any distance between the devices. However, communicative proximity is not necessarily equal to physical proximity. For example, a computer in an office may be able to interact with a number of printers via a network, even if these printers are not physically near the computer. Indeed, the printers may be located on another side of, or on a different floor of, an office building, making use of the printers inconvenient. In some cases, a user of the computer may be aware of a local printer but unable to find the local printer via the network.

When apparatuses are found in the vicinity, the electronic device may display icons corresponding thereto on a display of an iPad, for instance. In some embodiments, the icons are arranged on the display to imitate the relative location of the apparatuses to the electronic device. In some embodiments, the icons may be overlaid on a floor plan, thus showing the locations of the devices relative to the floor plan.

An Office Scenario Emphasizing the iPad's use of Vicinity Sensors 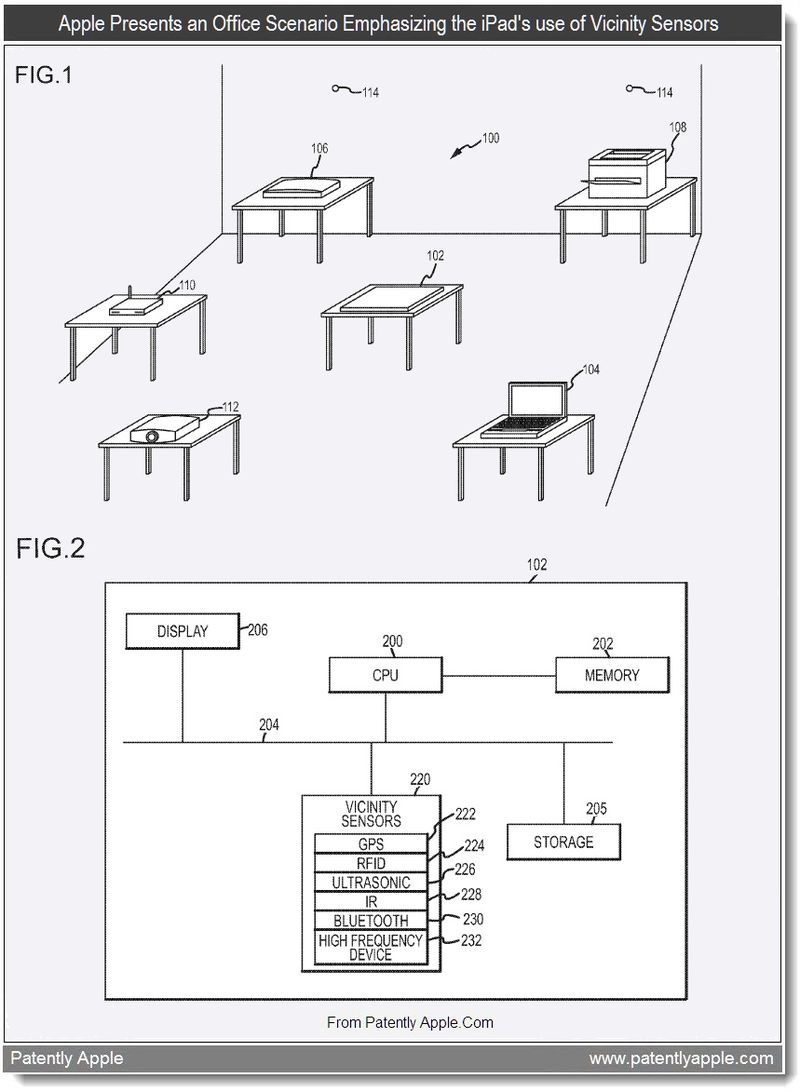 Apple's patent FIG. 1 illustrates an example room in an office having electronic and computing devices present. In particular, the room includes an iPad (referred to as the "tablet computer 102"), a notebook 104, a scanner 106, a printer 108, a WiFi access point 110, and a projector 112.

Furthering the discussion of local device awareness referred to earlier, one or more local references (114) may be provided. In some embodiments, the local references may be implemented as part of an indoor global positioning scheme. Each of the devices may be configured to communicate via one or more wired and/or wireless communication protocols. For example, the printer may be configured to receive files for printing via a wireless network protocol, such as IEEE 802.11n, and/or via a wired network protocol, such as Ethernet. As such, the devices may be network accessible and may communicate via a network connection.

Moreover, in some embodiments, the iPad may be configured to determine the relative position or location of other devices within its vicinity. For example, the iPad may determine the relative position of the scanner, the printer, and the projector using vicinity sensors as noted in FIG. 2 above. New sensors for a future iPad include RFID, Ultrasonic and Infrared which we first learned of in our June 2, 2011 report in respect to the iOS camera.

According to Apple's documentation, RFID could be used to determine if other devices are located within the vicinity of the iPad. The RFID used in the iPad could be implemented as an active, passive, or semi-passive device. In one embodiment, RFID may be implemented as an active device that transmits radio frequency (RF) signals that could be detected by RF antennas. In another embodiment, RFID could include a passive device that includes an antenna configured to generate an electromagnetic field in response to receiving a particular frequency signal. As such, the passive RFID device may be used to initiate vicinity scans.

Apple's documentation states that the use of an ultrasonic sensor shown in FIG.2 along with a high frequency device may be used for determining if other devices are located within an area and for imaging the area. Specifically, the high frequency device may include a steerable field array that may be configured to scan an area, such as room 100 shown in FIG. 1, and determine contours of physical objects within the room. For example, a 60 GHz band device may transmit probe signals that are reflected back and used to determine the location, distance and shapes of objects within the room.

The last new sensor for a future iPad that the documentation describes is an IR transmitter and distributed receivers. The distributed receivers may be located at different sides of the iPad and configured so that they receive signals generally originating from their side of the computer and not from the other side. As such, the iPad may determine a general location of a source of IR transmissions. 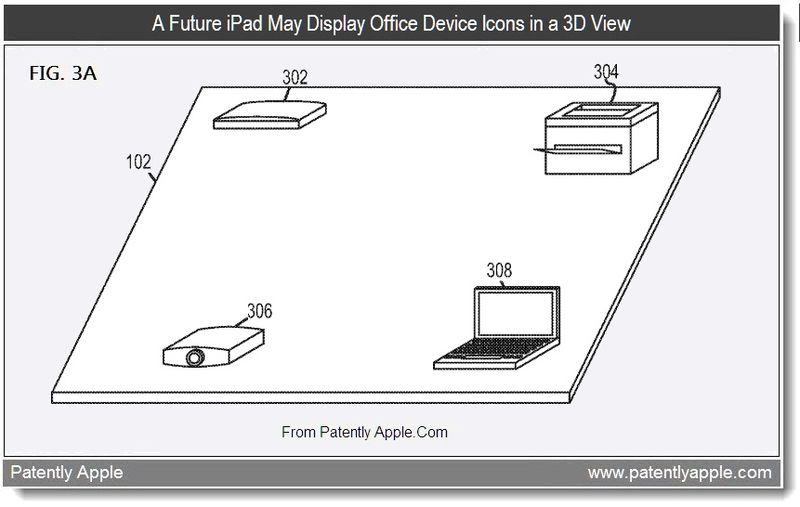 Apple's patent FIG. 3A illustrates a possible future iPad with icons 302, 304, 306 and 308 displayed. Additionally, these icons may be stylized representations of the devices to which they correspond. As such, the printer icon looks like the actual office printer, the projector icon looking like the projector and so forth.

According to Apple, a user will be able to interact with found devices by dragging and dropping documents onto the icons 302, 304, 306 and 308 and/or gesturally directing documents or other data toward the icons. For example, a user may select an item using the touch screen of the iPad and move it toward an icon representing the projector. In the case of a document, the document may then be sent to the projector for display by the projector.

It should be appreciated that although a document has been used as an example, other data may be communicated between the devices and other services/resources may be provided and/or accessed in a similar manner. For example, printing services on locally connected printers, network access services, video services (i.e., sharing a camera), video projection services (i.e., projector), audio services (i.e., using a microphone on one device by another device), and so forth may be indicated by an icon and accessed by selecting the icon or providing the data to the icon.

Patent application 20110161074 is another interesting Apple patent for those interested in a "Remote Conferencing Center." Generally, devices for generating recordings and/or transcripts include a consolidated device that may have multiple speakers and microphones. However, in larger environments, speakers who are too far removed from the consolidated device do are not detected or not detected to a discernible degree, resulting in an unintelligible recording. Apple's patent is out to remedy that. For those interesting in reading this patent, click on this temporary link which will be good for about 48 hours. Good hunting.

Reminds me a bit of the Bluetooh SIG All Hands Meeting. Will Apple work on their own spec or build on others?
I wonder what the refresh of iPods will bring...