Many electronic devices include cameras designed to detect images. For example, a traditional cellular telephone or portable media player may include a camera. Such cameras can typically detect images based on visible light but do not receive any data communications through either visible or invisible light. Accordingly, the functionality of cameras in traditional electronic devices is limited.

In some embodiments, a device could, based on received infrared data, disable a function of the device. For example, an infrared emitter could be located in areas where picture or video capture is prohibited, and the emitter could generate infrared signals with encoded data that includes commands to disable the recording functions of devices. An electronic device could then receive the infrared signals, decode the data and temporarily disable the device's recording function based on the command. 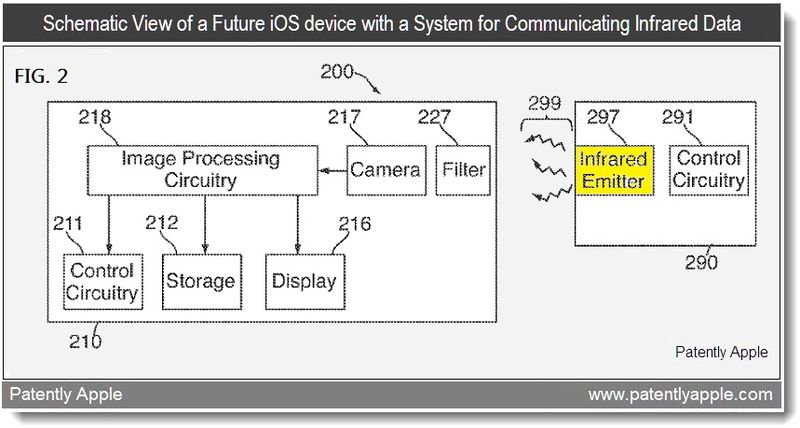 How it basically Works

So why include this feature into Cameras?

This example could easily apply to movie theatres trying to stop customers from filming a movie for illegal distribution or any kind of music concert to protect an artist's image from being photographed or videoed illegally, as shown below. 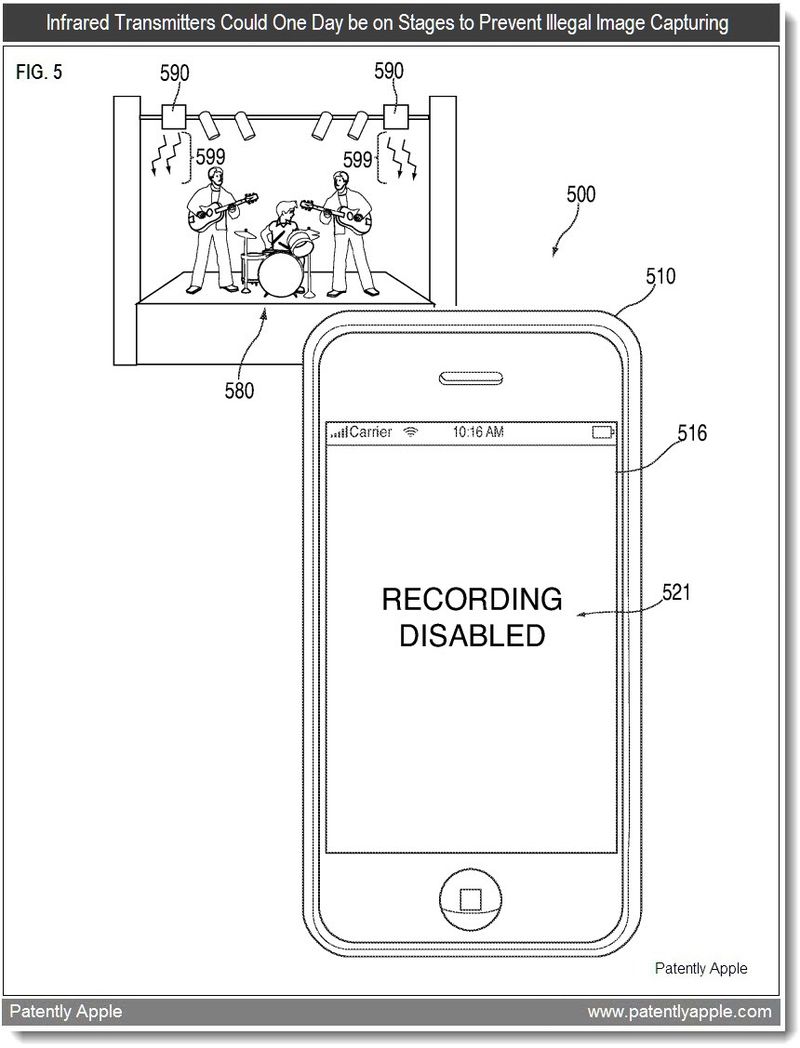 As shown in Apple's patent FIG. 5, transmitters (590) could be located adjacent to a stage (580) and when a camera is pointed at the stage to take a photograph or video, the infrared transmitter near the stage would communicate with your camera and instruct it to disable capturing capabilities.

For instance, let's say you're on vacation and visiting an aquarium, zoo or museum. That particular establishment could adjust their infrared system so as to automatically generate a watermark on the photos you take so that it identifies that particular establishment, such as: The Vancouver Zoo or The Monterey Aquarium or The New York Metropolitan Museum of Art. Apple could conveniently build that kind of feature into iOS cameras for an update to a feature like "Places."

Used as an Auto Tour Guide Apple makes it clear that their infrared system could obviously work in differing environments beyond tourist attractions. It could be applied to a retail environment so as to inform users of retail information on any given item in the store such as price, availability, discount status or any other relevant data that the retailer thinks will assist their customers in making a decision to make a purchase.

User Controls for the Infrared System

Apple's patent FIG. 6 is a perspective view of an illustrative screen for configuring an iOS device to receive infrared data. 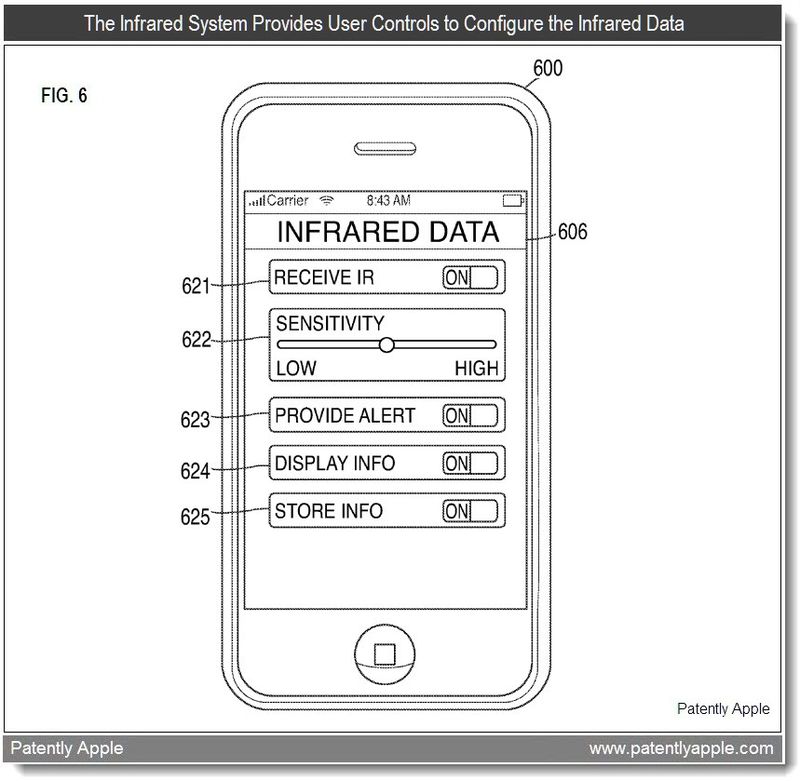 It is understood that, in embodiments where an infrared data includes commands to temporarily disable a device function, a user may not be able to set configuration options that override the disable commands.

Update # 1, June 3, 2011 4PM MST: one last factiod about this patent for the X-File crowd. In Apple's patent point # 48, the patent specifically adds "classified facilities" as being another application for this technology: "In some embodiments, a transmitter can be located in areas where capturing pictures and videos is prohibited (e.g., a concert or a classified facility) and the transmitters can generate infrared signals with encoded data that includes commands temporarily disabling recording functions." Hmm, I guess that means that area 51 will be better protected in the future. And no, you didn't see any little green men, right? Kidding aside, you could be rest assured that the request for such a feature must have come directly from the US government at some point in time.

A 2008 continuation patent (20110131495) titled "Graphical Representation of Assets Stored on a Portable Media Device" surfaced today which also relates to a provisional patent dating back to 2007. The patent application relates to the integration of progress based GUI's displaying various information on your about playlist progress and/or breakdown of your playlist by genre. Although I've seen a progress bar displaying how much space was left on my iPod, I've never seen charts as those presented below. If you have, then send in a comment describing which iPod model it was on. 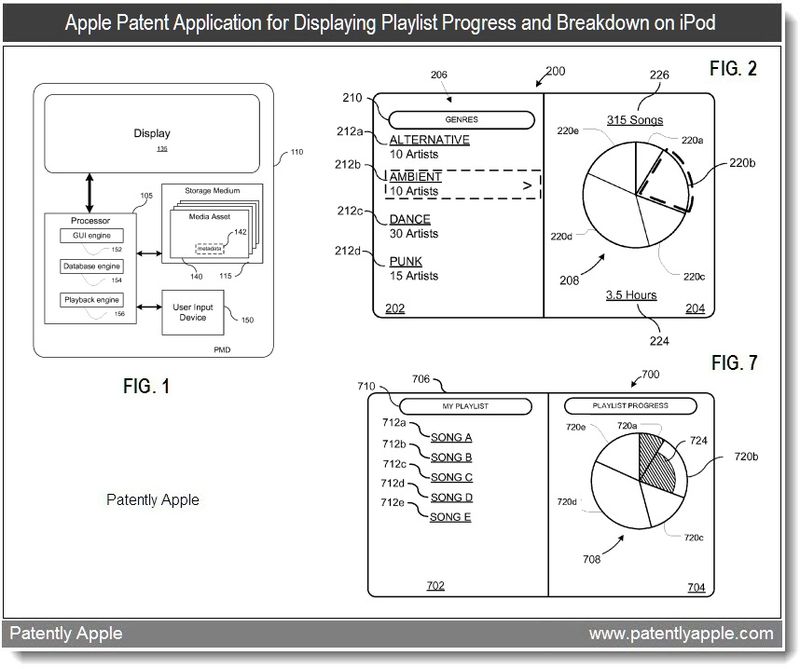 Another continuation patent application that surfaced today (2010130140) covers their 2006 patent application and one that Apple was granted a patent for in January 2011. In that report we stated the following: "It's an interesting read but you have to put it into proper context. Firstly, Apple isn't seen in this patent as the "MVNO" as some would hope for. Secondly, the "bidding" system goes out to a series of MVNO's which would confirm that Apple wasn't planning on being the MVNO. Thirdly, the patent was filed in 2006 - well before any iPhone announcement was made. So this patent may simply have been Apple's backup plan if their original talks with Cingular would have failed." Considering that it's already a granted patent, you have to wonder why they're back tinkering with the idea.

And lastly, Apple's patent application 20110130958 titled dynamic alerts for calendar events is, according to Apple's application, related to two older patents dating back to 2008 and 2009. Unless an older or continuation patent is worthy of reporting on, Patently Apple simply adds it to its current report as a notable mention as we've done here.

Let me clarify one last point:

The fact is that this technology works on the basis of reading “encoded data.” Meaning that Apple could work with the music industry to encode specific tour codes that restrict filming. The encoding may be applied to only a few of the top tours and no more. Extrapolating that to not being able to film riots or police/army abuses is a stretch beyond reason. Apple’s iPhone would require a code that they approved and could be worked into an iOS update (theoretically). That’s not going to happen for anything outside of what Apple and specific venues agree to. It’s not a random ability to shut off the camera by any other parties.

The Washington Post wrote a piece on Apple's patent and the petition in play at the moment:

The spin about the "cost" at the end of this report is playing into the hysteria that is being drummed up about the technology described in Apple's patent.

While I fully understand and appreciate legitimate feedback about cutting back on filming concerts, which Apple and the industry could tweak, the hysteria about repressive regimes and police activity in North America and around the world abusing this is just that, hysteria. Hypotheticals like this are never ending loops. You could put a negative spin to anything. It doesn't mean it'll come to pass.

I made my view point known earlier, before the post report was ever posted.

Yes there is a positive side to Apple's patent and only the concert angle is a little negative. What came up much later about police state activities from someone's imagination is what I see as a total over reaction to a simple "patent application."

If Apple would integrate an infrared camera into an iPhone, it would be possible to use the camera to detect heat gain / heat loss in homes and businesses. Owners would be able to see where insulation was missing or inadequate in their homes. One could see if a distribution panel or a light switch was overloaded. This would be of great benefit.

If the Apple IR camera patent does come to fruition, perhaps venues would at the very least have a tiered pay system to photograph. However, the negatives to this technology clearly outweighs the positives. What I worry about are IR receivers overstepping the bounds to where we are legally allowed to photograph and record.

My point is that the patent covers many angles and that the camera shut-off is just one. I doubt that Apple dreamed up that latter feature. I believe it was an industry-request. Other music-phone players may also be forced into following suite if they want to have phones with music. It's the music industry taht will hold the key on this feature, not Apple. If you notice in the patent, the emiter is on stage with the lighting system. That's not an Apple initiative, plain and simple.

@Fred. Every time there's a new technology, we find that it has a good side that could be exploited for evil doing, such as your Rodney King example. I'm sure that Apple and responsible industry leaders (HP, Msft, Dell, Google) are working on ideas to protect content and artists right to make money and protect their image etc. That's business. I don't expect younger people to get that, but reasonable adults will.

Apple is also emphasizing other aspects of this technology for guided tours and for use in retail environments. These are positives that are being overlooked because "teens" are getting all upset at not being able to record concerts. The reaction just proves that the industry is right about illegal recording being a problem. Somewhere along the lines however, there could be compromise. Perhaps the emitter will allow for a single song or 10 minutes of filming instead of it all. It's a patent application that hasn't been approved yet, so there's time for tweeking the technology.

Apple watches the reaction the community has to these patent applications so that the final technology could be accepted by all parties concerned.

Scary.
So basically reality now comes with a watermark, or even an "invisibility cloak" as far as digital recording goes.
No more Rodney King incidents then. Or at least, such incidents won't get recorded in future, as the police wil carry "no record" beacons as a matter of routine.

This wouldn't get backed by any company unless it were a standard across all smartphone platforms, since they just patented it, it would obviously be an iphone only thing, therefor no company would back it. Why would any company take the time to block only one specific device instead of them all?

How about for 3D? Glasses-free face tracking would be a lot more accurate and responsive. Just a thought.

iMouse application? It'll be like the magic mouse for your phone.