Apple introduces us to Searchable Mosaic Playlist Icons for iTunes

On June 9, 2011, the US Patent & Trademark Office published a patent application from Apple that reveals one of the next chapters for playlist creation in iTunes. Instead of playlists being presented in text form, Apple is proposing the organization of your playlists into searchable Mosaic Icons that could be set in various grid arrangements of your choosing. New navigational controls associated with the new iTune playlist icons will allow users to quickly navigate or browse through the items in the list without having to open a new view. To allow for this new form of graphical playlist design, Apple will have to either redesign iTunes or recreate a new Summary iTunes tab within iTunes that could present pages of your new playlists that are in mosaic icon form. Apple's proposed icon system could also be technically applied to folders in a typical computer directory structure containing subfolders.

The Current Problem to Solve

Data is becoming increasingly important and abundant in daily life. Accordingly, improved methods of viewing and managing data are required. Conventional methods of storing and viewing files such as directory file folders and indexes either present data poorly or are time consuming to navigate.

For example, file folders could organize files, but require searching for files. Data is easily lost and forgotten. While improvements such as tiled icons showing several images contained within a folder have made navigating a directory structure a little easier, the images often are not the most relevant images from that directory and browsing the contents of the directory requires opening the directory folder.

Likewise, indexes are useful for searching for forgotten files, but they are limited by the search query and poor visualization of search results. Additionally, browsing the search results requires opening each file individually.

Other methods of viewing and browsing datasets also exist, but are dataset specific and cannot be used to view a variety of datasets. Improved methods of managing, viewing and navigating data whether in a file system structure, a query of an index, or any other dataset such as tables or lists are needed.

Apple's patent relates to displaying and navigating items in an ordered list. The present systems and methods receive an ordered dataset and generate a graphical user interface for viewing and utilizing the data.

The images create an icon made up of a mosaic of the images. When the ordered list is selected by selecting the icon with a mouse or touch, the mosaic icon transforms to display only an image of a currently selected data item within the ordered list and translucent navigational controls. The navigational controls could receive inputs from a pointing device of choosing to allow a user to navigate or browse through the items in the list without having to open a new view. The presently selected item is displayed as the full icon and changes as new items are selected. When the ordered list is no longer selected the icon returns to the mosaic icon representing the whole list.

In Apple's preferred embodiments, the proposed technology is applied to datasets corresponding to digital media libraries and creates a graphical user interface for utilizing these datasets in a media playback and management application, such as iTunes. 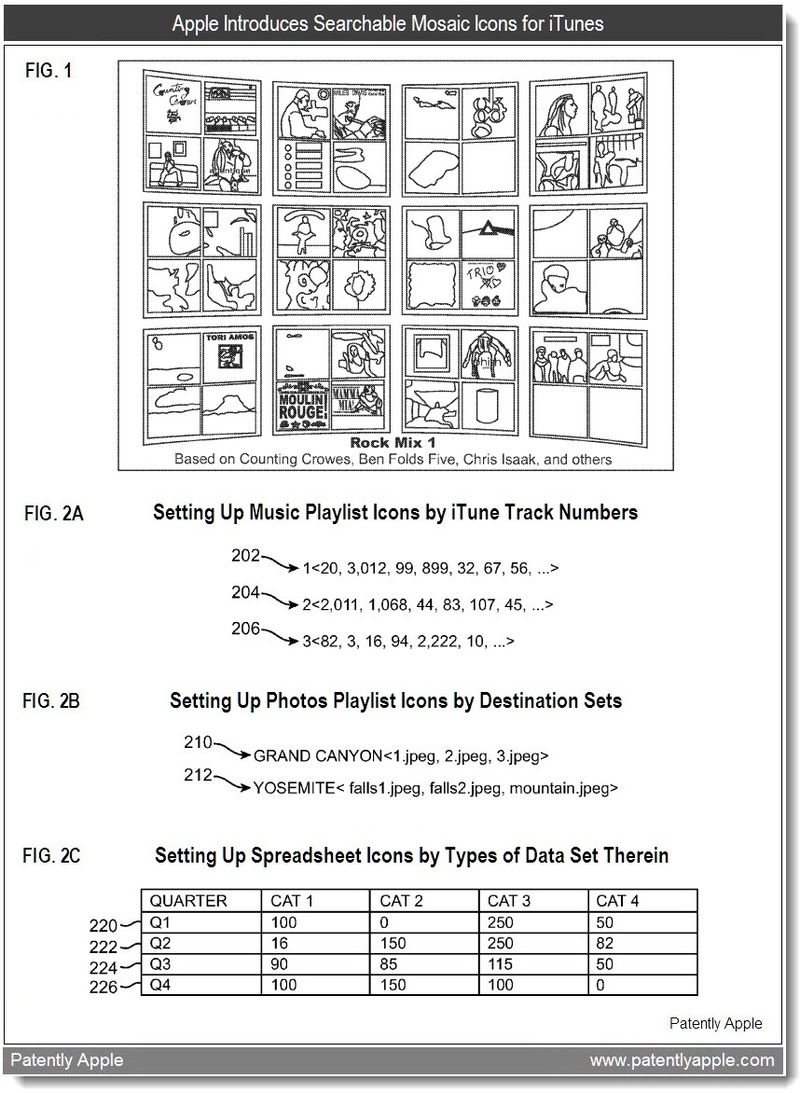 The dataset could represent divisions of a media library into a plurality of groupings and be displayed in a graphical user interface as seen in FIG. 1 above.

Updated Note: If you take a closer look at figure-one you'll also note that there's a unique curvature to the mosaic playlist layout that isn't visable on any other patent graphic example. It's easily imaginable for Apple to add some nice 3D-like shadow effect to the bottom of that curvature that's similar to Cover Flow. In fact, you have to wonder if this won't be available in that kind of format. Over and above Cover Flow for individual Albums, Apple may simply add an option of viewing mosaic playlists in that same manner. It's just a thought.

Getting back to the patent, each subset is given a default name based on its predominant characteristics and a determined naming convention. The system analyzes the metadata associated with the dataset, and if the underlying collection of data is a collection of files, the names of the files and metadata associated with those files could be used to determine a default name. In some embodiments, the default name could be based on the file names of the top items in a subset. In some embodiments, the default name is based on a predominately shared characteristic of the individual data items in the dataset.

With reference to the collection of music items example, the subset could be named based on a predominant genre of the music items in the subset. If multiple subsets share the same default name, a number is added at the end of the name to distinguish the subsets.

In some embodiments further description of the datasets is provided. Further analysis of the datasets could reveal more descriptive information of the items in the subset. For example, a subset might contain media items from the same artist or album. The subset could include a "Based On" subtitle that lists descriptive information about the items in the subset. In this example, each subset has a set of artists that are listed below its title to give users an indication of the subset's content. These artists are the most representative of the subset, as determined by the algorithm. The "Based On" tag is as follows: Based On <artist 1>, <artist 2>, <artist 3>, and others. For example: "Based on Counting Crows, Red Hot Chili Peppers, Dave Matthews, and others."

In Apple's patent FIG. 2B noted above we see another type of data category that could be organized and browsed using the present technology. Patent FIG. 2B represents a folder in a typical computer directory structure containing subfolders organizing image files of images of various national parks. Subset 210 "Grand Canyon" contains images 1.jpeg, 2.jpeg, 3.jpeg, and others of the Grand Canyon, which are ranked in an order and subset 212 "Yosemite" contains images of Yosemite. In this example the dataset is organized simply by name.

Apple's patent FIG. 2C illustrates yet another type of data category that could be displayed and browsed using the present technology. In FIG. 2C a table is illustrated and the subsets 220, 222, 224, and 226 correspond to the rows of the table representing financial year quarters. The subsets could also correspond with the columns or any other organization that makes sense. The ordering can come from the ordering within the table. Apple's patent elsewhere states that the graphic could also be a miniature of the first page of a document.

A Playlist Set in a Mini Four-Tile Mosaic Icon 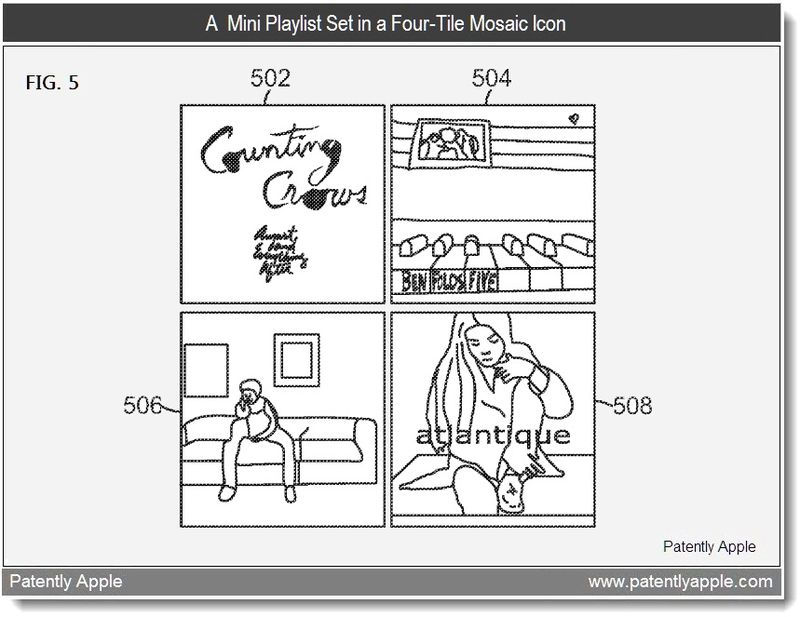 Apple' patent FIG. 5 illustrates a complete mosaic showing a four image grid (502, 504, 506, 508) with each tile associated with a selected file and/or a song. Icons or tiles are initially sorted by significance. That is, the icon that represents the largest subset of the user's Library comes first, and the subset that represents the smallest section comes last.

Apple's patent FIGS. 6 and 7 illustrated below show the arrangement of icons in a 4 x 3 grid in figure 6 while figure 7 shows the icons in a 3 x 4 grid. The shape of the window that displays the GUI necessitates the change in arrangement.

Rearrangement shouldn't be necessary when scaling the size of the window, but only when the shape of the window is changed in such a way that is benefited from the rearrangement. However, users may command-drag mixes to new locations, causing the other mixes to dynamically repaginate. 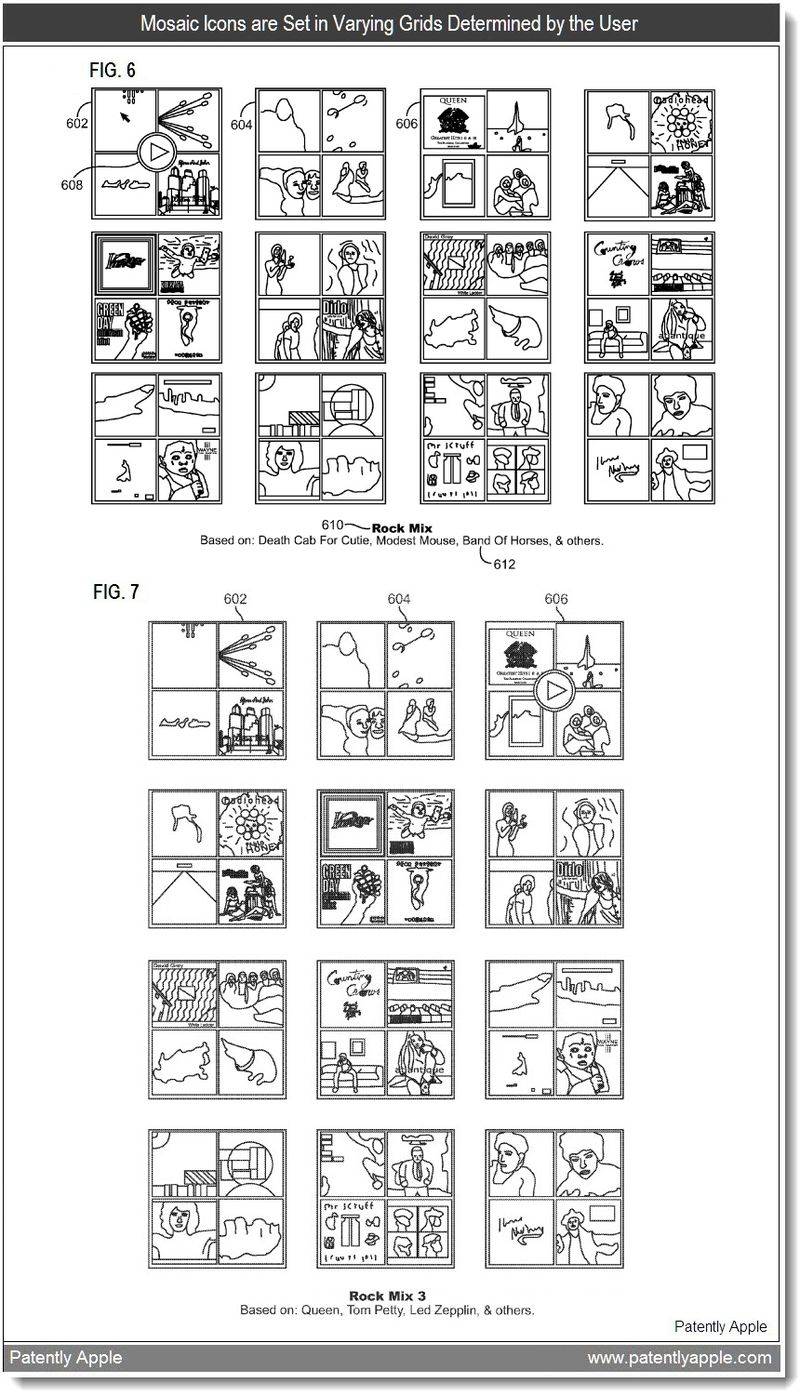 Other subsets retain their position according to rank in the interface, but some subsets are relocated. By minimizing disruption to the organizational scheme of the icons, users could locate subsets much like paper on a desk; they could remember where in the interface to locate the subset.

According to Apple's patent, clicking on the icon activates primary selection of the icon and could be accompanied by a variety of actions. Clicking could initiate browsing of the subset represented by the icon. In some embodiments, the mosaic view for the selected icon switches to display only icon(s) that represent the first item in the dataset. In some embodiments, music could accompany the display of the icon(s) when the items in the dataset represent music or audio tracks.

Clicking could also cause additional browsing controls (608) to be presented. The play icon could switch to a pause icon and/or could be joined by fast-forward and rewind icons. Clicking on these icons will result in navigating forward and backward through the underlying dataset. As the dataset is navigated the icon could switch to display a graphic that is associated with the currently selected item in the dataset.

In addition to playing browsed items, the subsets could be useful in generating playlists of music, which could also be played and browsed in a similar manner as described above. In the example of using the underlying dataset to create a playlist, the dataset could itself be a playlist, or a list of candidates for a playlist.

In 2010, Apple revealed yet other changes being contemplated for the iTunes UI revolving around the use of a new spiral concept (One, Two). What we'll finally end up with in the future is unknown at this time, but it's safe to say that Apple's engineers are hard at work trying to find the next great set of features for their next major iTunes upgrade. If you want to send Apple your feedback about today's idea, then simply make a comment below.

Patent 20110131825: Magnetometer Accuracy and Use: This continuation patent was covered in our December 2010 report.

Apple also filed a continuation patent for one filed in 2005 relating to MagSafe for MacBooks under 20110136351. Apple has filed more up-to-date patents on MagSafe connectors including one relating to a form of fire resistant Magsafe and another relating MagSafe with fiber optics.

I like this idea as it could easily transfer to the iPad nicely. It may even allow me to create playlists on my iPad with just touch gestures. My wife and I have more than 35 playlists and it's easy to forget most of them without having to painfully review them one by one. In a mosaic, I'd get used to the visual of a playlist. And if I forget some of the tunes within the icon layout, I could just gesture over an icon and have a list pop up or the icon turn over to see the contents quickly. This theoreticcal design gets my vote for sure.