Apple Files Two Massive iPod Trademark Filings in Europe: The Question May Be, Why?

On June 8, 2011, the European Patent & Trademark Office published two of Apple's trademark applications for "iPod." The trademark applications, which are not classified as renewals, cover 44 out of a total of 45 International Classes. That's even a first for Apple. Yet the real question may be, why?

Is this a Sign of a Broken System or a Message of Things to Come?

The silliness of Apple's trend of filing a trademark under every conceivable class covering every conceivable possibility under the sun is insane. Does Apple's "iPod" trademark really have to be filed under perfumery, baby food, blenders, dental materials, asbestos, carpets, tapioca and veterinary services? I mean, I know it's a dog eat dog market out there, but c'mon.

If Apple is trying to make the point that the trademark system is broken, then I think they've made their case. At the end of the day, what's the use of having an International Classification system if every trademark is covered by every class?

If there's a silver lining to be found in all of this, then perhaps these massive filings are trying to tell us that Apple is preparing something completely new for their iPod line-up this fall. With Apple pushing iCloud this fall – Anything is possible. That's what makes these applications so intriguing.

Do you think that Apple's message is that the trademark system is broken or that there are big changes coming to their iPod line-up this fall? Send in your vote via comments below. 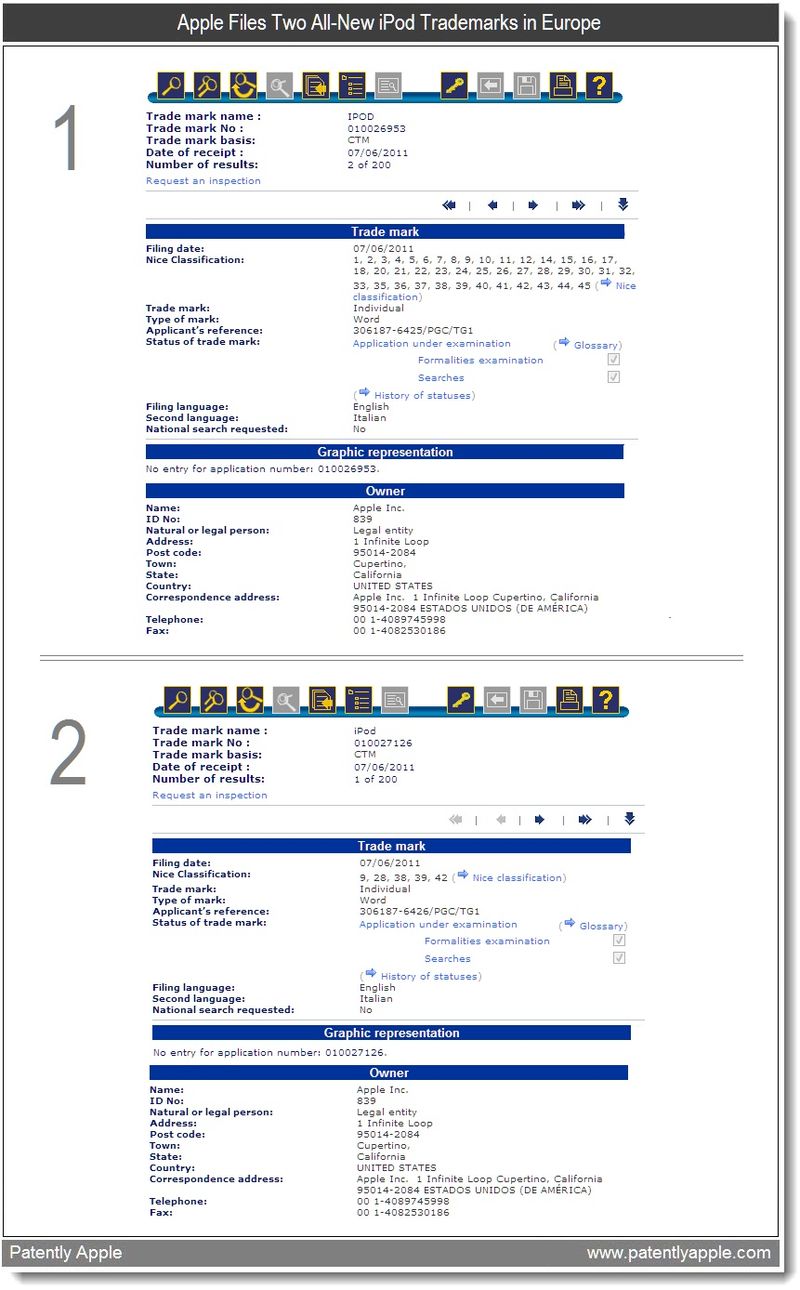 In other trademark news, Apple has filed a trademark application for iCloud in Canada under number 1529782.

I Think there will be a 5-7" iPod touch that will interface with gaming, photography, & the web. I would prefer the 7" model myself. It would fit in a cargo pocket, purse, or camera bag, etc.

I agree that Apple is about to reinvent the iPod. Perhaps adding a 3G sim to sync, buy and download on the go. It has to be pc free so there has to be changes afoot. I'm sure it would be a consolation to carriers also after imessage was announced. The iPod watch would be great with FaceTime and VoIP :)

I think it could possibly be double edged.
If the iPod product is to expire then Apple dont want WillyWonka products around the world calling themselves iPod this and that...
Alternately... they are about to reinvent the iPod.

iOS devices have to change because with the cloud, hard drive size won't matter. Maybe we'll get that iPod watch after all.

Apple's iCloud changes the rules. iCloud is Apple's marketing advantage and they're going to reivent music players once more. Apple is a moving target and I'd hate to be their competitor.

The patent and trademark system is without a doubt broken. But due to announcing icloud this week, you have to wonder if they are pointing to another big shift on the way this fall for all things ipod.

Definitely big things coming to the ipod lineup this fall. iCloud changes everything. Why have large drives if the majority of your music will be in the cloud? Believe it or not, I do think Apple is rattling the bushes with this trademark filing and you picked up on it.