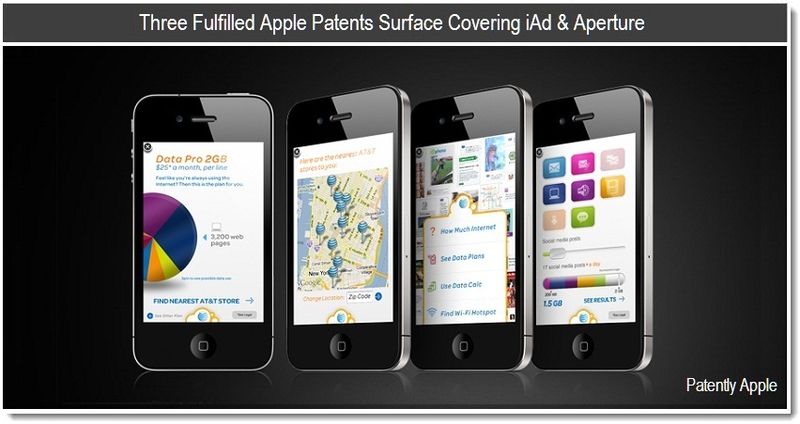 Every new round of product updates from Apple fulfills a few dozen or more patents whether Patently Apple or anyone else covered them or not. It could be that a new product is using a new kind of screw or a new GPS module or a new twist in the way that they manufacture LED Displays. Apple doesn't release a product until their legal team has filed the right IP documents, plain and simple. Yesterday, there were three distinct patents that were fulfilled and they're worth noting even if they're not about flying cars or magic bikes. Today's report takes a look at two great little patents covering two of Aperture 3's new features along with a third patent which covers Apple's iAd services. In particular, Apple's iAd patent is about the provisioning of invitational content and its connection and interrelation with built in iPhone apps like "Compass and Maps."

Apple's first fulfilled patent application of the day relates to their advertising service company iAd. In it Apple first lays out the problem with traditional advertising systems for mobile devices today before presenting their own round of solutions.

A quick overview of the market and the problems that Apple's patent is to overcome are presented as follows: The use of mobile phones in the United States and around the world has increased dramatically. It is projected that soon the number of mobile phone users will exceed the number of fixed telephone subscribers. The proliferation of mobile phone usage has engendered corresponding advances in mobile phone technology. Mobile phones can now handle many types of multimedia content. Consumers can navigate the World Wide Web (the "Web") from their mobile phones to much the same degree as from their home computers. The proliferation of these new multimedia mobile phone devices has accordingly created a ripe market for content delivery, which both third-party content providers and wireless carrier companies have become increasingly interested in.

However, the content available to mobile devices is often difficult to access and preview before downloading or purchasing. Indeed, most content must be advertised or marketed in some form to the consumer, and listed in a catalog, deck or file for the consumer to access and download. Displaying advertising or marketing information becomes essential for the distribution of any content intended for the mobile device.

Nonetheless, mobile devices, and particularly mobile telephones, tablet computing devices, and PDAs are a practical invitational content delivery medium since many mobile device users spend significant amounts of time with their mobile devices. Much of this time, however, is now spent in "applications" as opposed to merely using the device as a communication device. For example, many consumers utilize their mobile devices as a GPS device, as a portal to various social networking applications, and as a gaming device. Only a small percentage of a user's operation of the device may be spent as an actual communication device. These applications are often developed by third parties (e.g., people other than the device manufacturer or the network provider), and can limit the ability of content developers to reach the end users. Some companies may provide application programming interfaces (APIs) to developers that allow access to content delivery networks or device operating system functionality, but the ability to access multiple content delivery networks and render media-rich content all within the context of an application is not currently supported.

An Overview of Apple's iAd Solution

To ensure that invitational content is appropriate for the device and operating system, the present technology also makes use of a content delivery network which can learn of various device features, such as device model and operating system, among others, and serve the appropriate content. In some embodiments, the content delivery network can also provide additional software that is not resident on a device when it is needed. Apple's patent FIG. 2 illustrates an exemplary scheme of interactivity with the invitational-content application. FIG. 3 illustrates one exemplary approach to delivering media-rich advertising to a mobile device.

Apple's patent FIG. 7 is a key illustration which presents an exemplary system embodiment (700) consisting of several modules and components: A mobile device (702) is shown in communication with a content delivery system (710). As illustrated, the mobile device includes a mobile application (704), a mediation client (706), and an application loader (708). The content delivery system is shown including the mediation server (712) and the rich media library (714).

Apple credits one of their iAd Managers Eswar Priyadarshan and team member Ravikiran Chittari as the inventors of patent application 20110113089, originally filed in Q4 2010 and relates to a provisional patent filed in 2009. Both engineers were associated with a 2010 patent which we covered under the title "Apple's Mad Men are Focused on Tracking You." See Apple's iAd webpage for more details about their advertising services. You could find more about Apple's other advertising based patents in our archives. Our Cover Graphic was taken from Apple's iAd Brands webpage.

According to Apple's website, Aperture 3's Brushes feature lets you paint in a wide range of effects to selectively fine-tune your photos. With precise control of the size, softness, and strength of each brush, you can adjust only the parts of the image you want, leaving the rest untouched. For example, you can burn the green of a palm leaf lying on a beach to decrease the exposure and make it darker, without touching the rest of your photo. Or you can dodge just its shadow to increase the exposure and bring out the detail of the sand. No matter how much you change an image, you can always go back to the original. 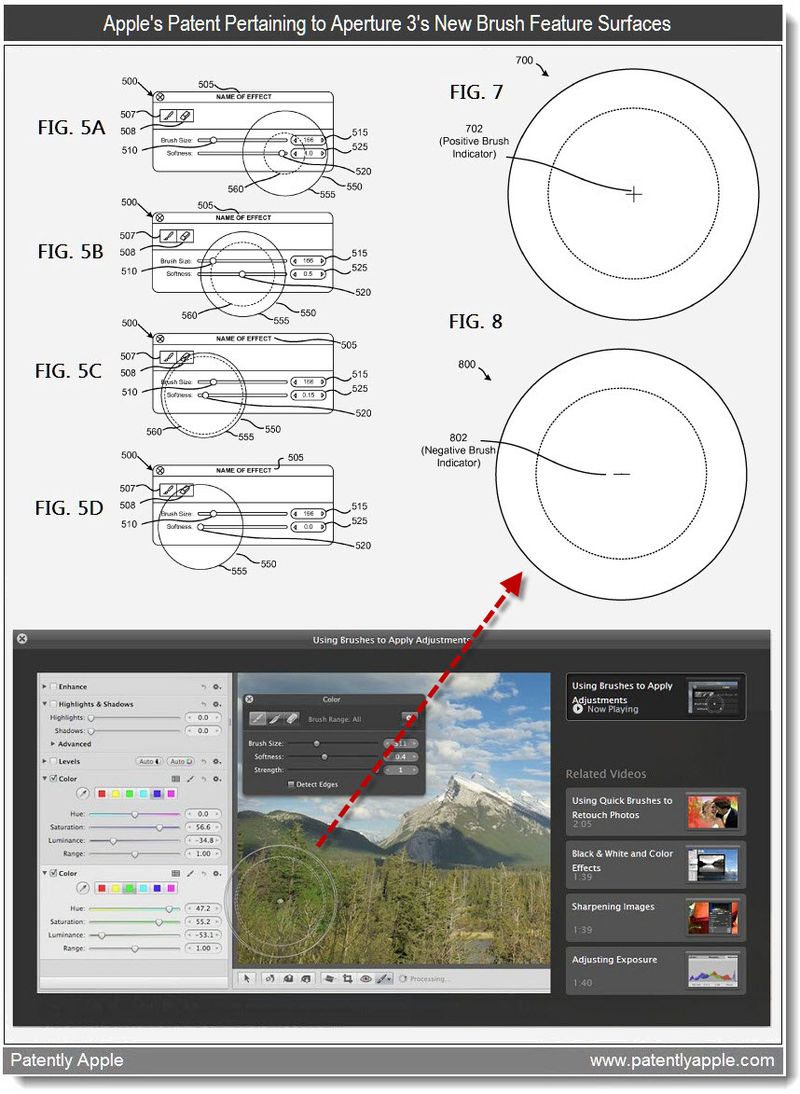 The bottom graphic that is presented in our main report graphic noted above is directly from Apple's video covering their new Brushes feature which relates to a specialized cursor. You'll note that various brushes described in Apple's video match those that are present in Apple's patent figures above.

Apple credits Douglas Ahmann and Mark Kawano as the inventors of patent application 20110109646. (Here's a temporary link to Apple's Brushes patent that will only be good for a couple of days).

Apple's Aperture webpage states that if you're shooting with a GPS-enabled camera, Aperture 3 uses reverse geocoding to convert location coordinates into familiar location names, and then displays those locations on the Places map. If you're using a separate GPS tracking device, the path of your photo journey appears on the map when you import a track log. You can even extract locations from iPhone tracker apps or your iPhone photos.

According to Apple's patent, "in some implementations, the GPS information can be used to generate a track path including multiple points, each representing a location at which GPS coordinates were captured." Apple's Places feature provides you with the ability to get Terrain, Road or Satellite views pinpointed on a map as to where your photos were taken. 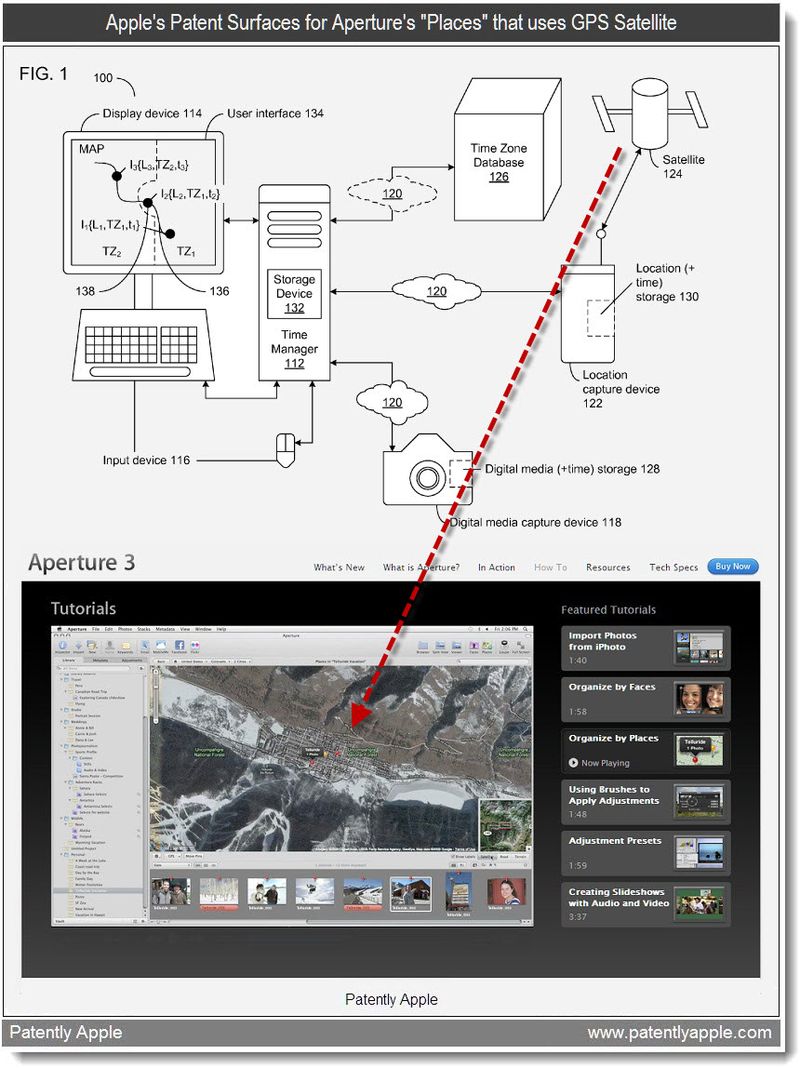 Of course if you're not comfortable with Location based services, you could always opt out of them very easily. But for those who like creating maps based on photos that they've taken over time and eventually over a life time, it's a pretty nice feature to have.

Apple credits Nikhil Bhatt and Alexander Wallace as the inventors of patent application 20110109769, originally filed in Q4 2009. (Here's a temporary link to Apple's "Places" patent that will only be good for a day or two.)