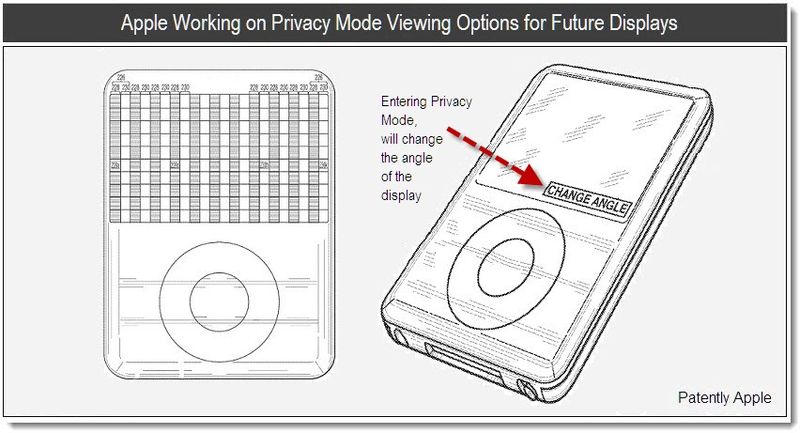 The US Patent & Trademark Office published a patent application of Apple's yesterday that revealed one of the next chapters for Apple's top line displays. The patent describes a method of allowing a user to steer display light beams in various directions to effectively provide themselves with a new privacy option. The new privacy option mode only allows those directly in front of the display to view its content. Anyone on the periphery would simply see a blank display. A number of professions may find this feature very appealing. The patent also vaguely points to this technology being used in association with a future pico-like projection system and/or 3D Holographic Display.

Apple's Invention Applies to a Wide Scope of Devices

Apple's patent illustrates a handheld device noted as patent point # 200 presented below. Although the device is that of an iPod Classic, the fact is that the patent is primarily focused on practical everyday portables. Yet in the larger picture Apple clarifies that the invention could apply to any of the following devices:

The Main Focus of the Patent

The main focus of Apple's patent appears to be about a method of controlling the viewing angle of a display so that a user could implement a unique privacy type of function that restricts viewing of the display to only the one looking at the display directly in front of it. All peripheral viewing is locked out by controlling display elements that the patent painfully describes in detail.

Apple lists one of the applications as relating to a "transportation vehicle instrument." Think of a driver being able to view various gauges in his direct view of the road in the form of a sharp light display that only the driver could view. The passenger would never see what the driver sees and causes no distractions. Think of school computers not allowing students to cheat by looking at their neighbors display. The invention could be of value to any industry where there's a need to keep files and images private such as in the legal, medical or law enforcement fields. On the lighter side of things, it could be of benefit to those riding a bus, subway, train or even a plane. Those sitting or standing beside you wouldn't be able to figure out what you're working on, what game you're playing or what content you're viewing. This feature certainly has it's advantages.

The patent states that a method may include directing a light beam towards a liquid crystal material and steering the light beam. The steering may include applying a variable electrical control signal to the liquid crystal material. You could get an idea of how this would work by reviewing patent FIG. 3 below which illustrates a series of mirror-like structures that could control the directions of the display's light beams.

In a particular segment of their patent, Apple discusses the types of display and projection systems that could be used in connection with their new invention.

In respect to display, Apple lists LCD, LED, OLED, a surface –conduction electron-emitter display SED (which is a flat panel color television technology), a carbon nanotube display (an e-paper-like display), a nanocrystal display (or Quantum Dot Display – for better battery life), or any other suitable type of display, or combination thereof.

Alternatively, the display related to Apple's invention could include a display coupled to device or a "movable display" (think hybrid desktop) states Apple's patent, or a "projecting system for providing a display of content on a surface remote from electronic device, such as, for example, a video projector, a head-up display, or a three-dimensional (e.g., holographic) display." Apple first discussed a video projector in the very same way back in 2009 which is likened to a pico-like projector. Likewise, Apple first revealed a 3D holographic display back in 2008 in context with an entertainment system like a home theater. Another part of this patent also covers Apple's iOS based camera view finder and reflex cameras as being one of the offshoots of their invention.

How the user will actually enter privacy viewing mode is illustrated in Apple's patent FIG. 2A's patent point 210 below. Here we see that touching a corner of a future display will pull up a touch event option allowing the user to "change angle." This will provide the user with options of entering various modes such as privacy and others. 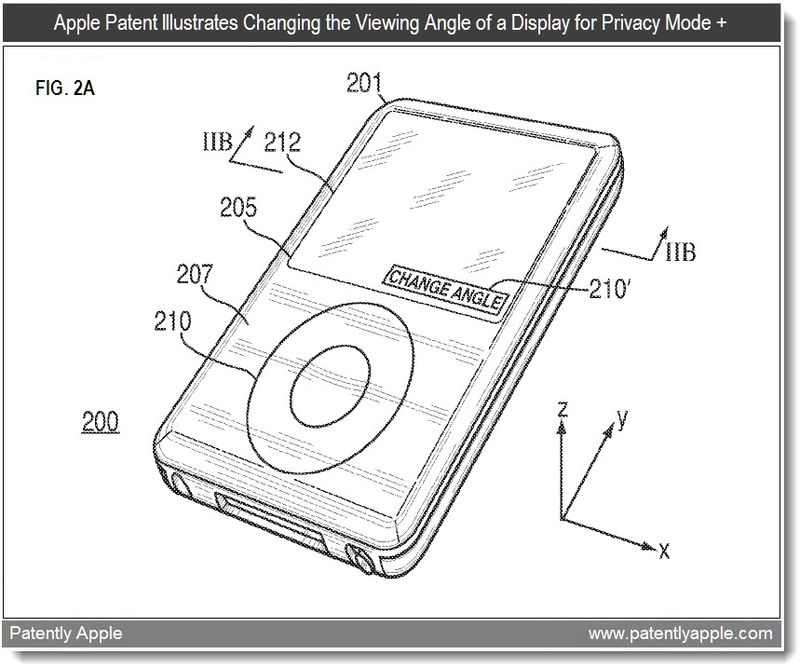 It should be noted that although the patent example uses a Classic iPod, the patent makes it clear that the invention relates to any touch screen based device. In respect to patent illustrations, a patent's only obligation is to convey a concept and doesn't have to present the actually finished product. The filing of a separated device design patent is set aside for that. So don't get caught up into the illustration showing an older iPod. The patent is a current patent, so put that into context.

How the invention achieves changing the display's angle is buried in extreme detail within this patent. Our report only provides you with a grand overview and over simplified explanation. 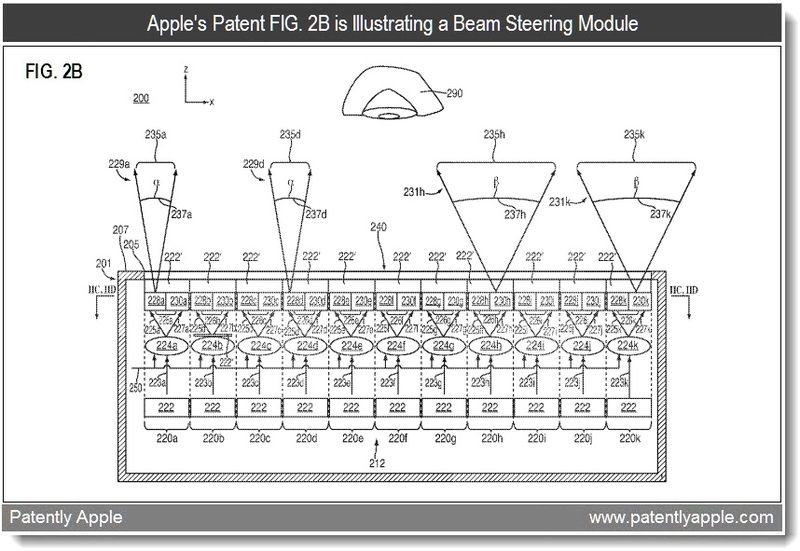 Each liquid crystal optical element of each steering module 224 may function as an optical "wedge," such that a linear gradient in the index of refraction of the element may provide a "beam steering" effect. 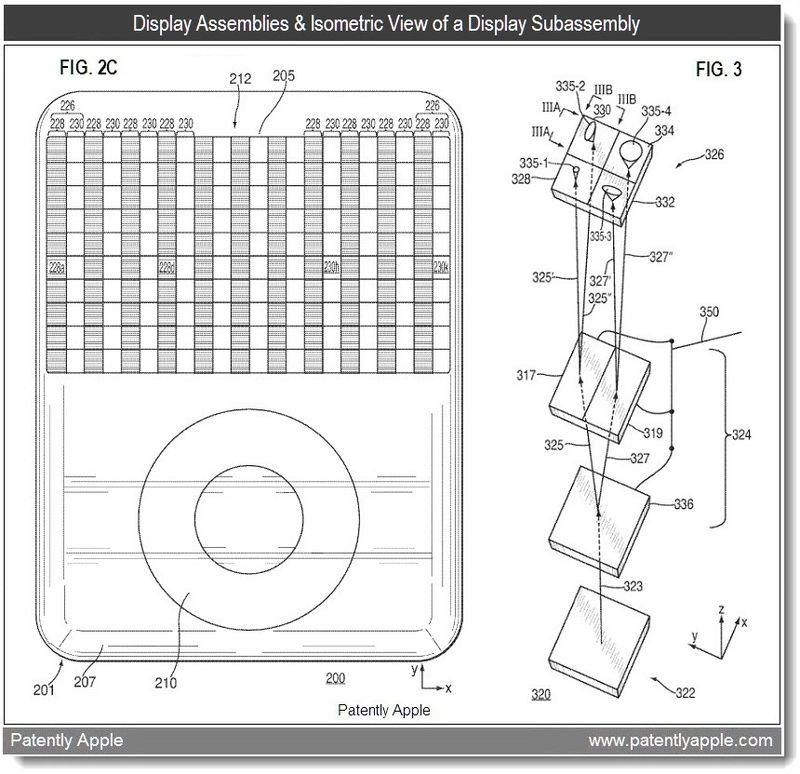 To Sanjith. While we point to Apple's vague referrence to 3D useage in our patent report, there's no mistaking that the focus of Apple's patent application is that of privacy. Thanks for your input.

Isn't this more like a auto-stereoscopic 3D patent by Apple? Beam steering technology seems to be for that purpose mainly.

Between this and another patent talking about using handhelds as scanners and even a mouse, it's clear that Apple is experimenting with a lot of off-shoot ideas for future displays.