Last year Apple was granted a patent for a "Display that emits circularly-polarized light." We reported on that granted patent in March 2010. Earlier this week the USPTO published Apple's divisional patent application 20110124260 which claimed priority from both 2006 and 2010 patents which were covered in Apple's granted patent. The illustrations found in this latest filing were identical to those used in Apple's granted patent. Considering that the technology was in-hand as far back as 2006 and that the granted patent actually illustrated the technology being used on an iPod Classic, it's clear that Apple was far beyond "exploring" this technology as others have incorrectly reported on this week. Today's report provides you with the reason why Apple filed their divisional patent application this week.

So Why did Apple Submit this Divisional Application?

So why did Apple submit this divisional application? The answer rests in their divisional application's claims. The only primary point of difference in this application is that Apple apparently wants to secure their "method for manufacturing a display that emits circularly-polarized light" being that they've already secured the technology behind it in their granted patent. In today's never ending patent wars, Apple has to nail down everything that they could for possible future litigation.

It's interesting to note an original point that was made in Apple's granted patent and echoed in their latest divisional patent about their retardation film. Apple states that they could implement their retardation film as "a film in front of the display mechanism; and/or incorporated into a display cover which can be attached to the display mechanism." That could mean that Apple has already implemented this technology on certain iOS devices and /or could decide to sell the feature as a future optional display cover. If the technology isn't already on the iPad, then Apple could theoretically sell a retardation film display cover using their latest magnetically attachable cover methodology that was just released. 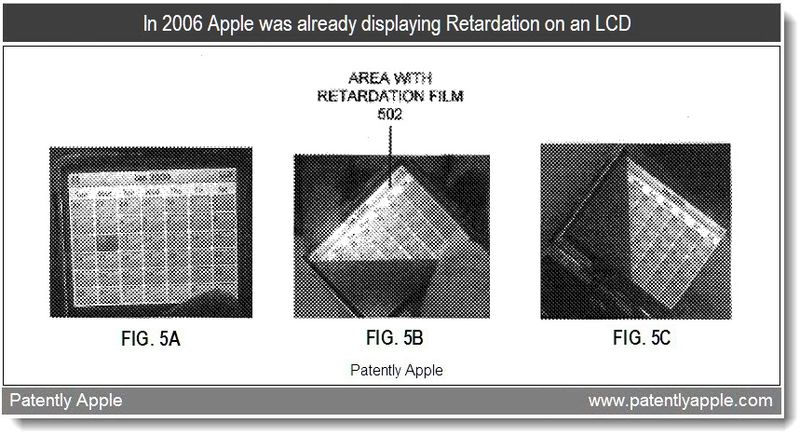 Above is a series of patent figures presented in Apple's original 2006 patent application and repeated in their granted patent and their latest divisional application. The point is that Apple was already displaying the retardation film being used on the LCD display of an iPod Classic in 2006. So others reporting this week that Apple is "exploring" this technology are clearly behind the curve on Apple's history of this patent. 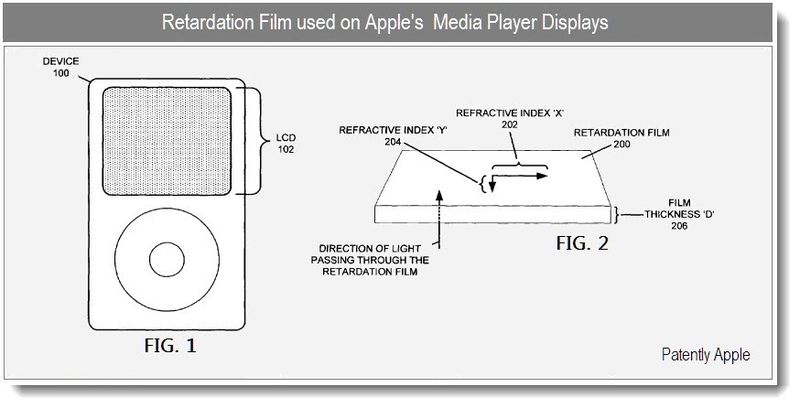 Notice: Patently Apple presents only a brief summary of patents with associated graphic(s) for journalistic news purposes as each such patent application and/or Granted Patent is revealed by the U.S. Patent & Trade Office. Readers are cautioned that the full text of any patent application and/or Issued Patent should be read in its entirety for further details. For additional information on the divisional patent application noted in this report, simply feed the patent number into this search engine.

Updated Legal Case: Our report covering Apple's lawsuit against Fie Lik Lam (of whiteiphone4now.com) has been updated with an official court graphic illustrating that the case has bee formally dismissed.

By calling Sharp, "Sharp Kabushiki Kaisha," you kind of reveal that you work for them. It just sounds like sour grapes to me.

Many LCD Display patent filed by Apply recently are already obtained and used by Sharp Kabushiki Kaisha many years ago. I would be surprised if they could get away with it. Oh wait... I forgot how many loop holes IP laws have these days!