According to a new Apple patent application that was published this morning by the US Patent and Trademark Office, future iPhone's are likely to provide end users with effective new ways of communicating in both noisy environments like a restaurant or even during a quiet office meeting without stirring a mouse. The system involves using new text-to-speech and speech-to-text converters as well as providing a means of sending prerecorded notifications to the caller if you're unable to speak when answering your phone. I think that many will appreciate these new features and only hope that Apple could get these to market in good time.

Problem One: Communicating in Noisy Environments

A smartphone user may sometimes have to make or answer a phone call in a noisy environment. Noise could interfere with a phone conversation to a degree that the conversation is no longer intelligible to either conversing party. A user in the noisy environment may try to scream into the phone over the noise, but the screaming and the noise may render the voice signal unintelligible at the other end.

Problem Two: Unable to Communicate During a Meeting

In another scenario, it may be inconvenient for a user to talk on a phone. For example, users may be in a meeting and don't want to draw attention to themselves by speaking into the phone. The users may try to whisper into the phone, but the whispering may render the conversation unintelligible. The users may choose to send a text message to the other party, but the other party may be on a landline where texting is unavailable, or may not have a texting plan. It could be frustrating to conduct a telephone conversation when the environment is noisy or the circumstance is inappropriate for a user to speak.

One embodiment of the invention is directed to an iPhone which establishes an audio connection with a far-end user via a communication network. The communication device receives text input from a near-end user, and converts the text input into speech signals. The speech signals are transmitted to the far-end user using the established audio connection while muting audio input to its audio receiving component.

In another embodiment, the near-end user can activate text-to-speech conversion whenever necessary regardless of the detected noise level. The near-end user could enter a text message, which is converted into speech signals for transmission via the established audio connection to the far-end user. 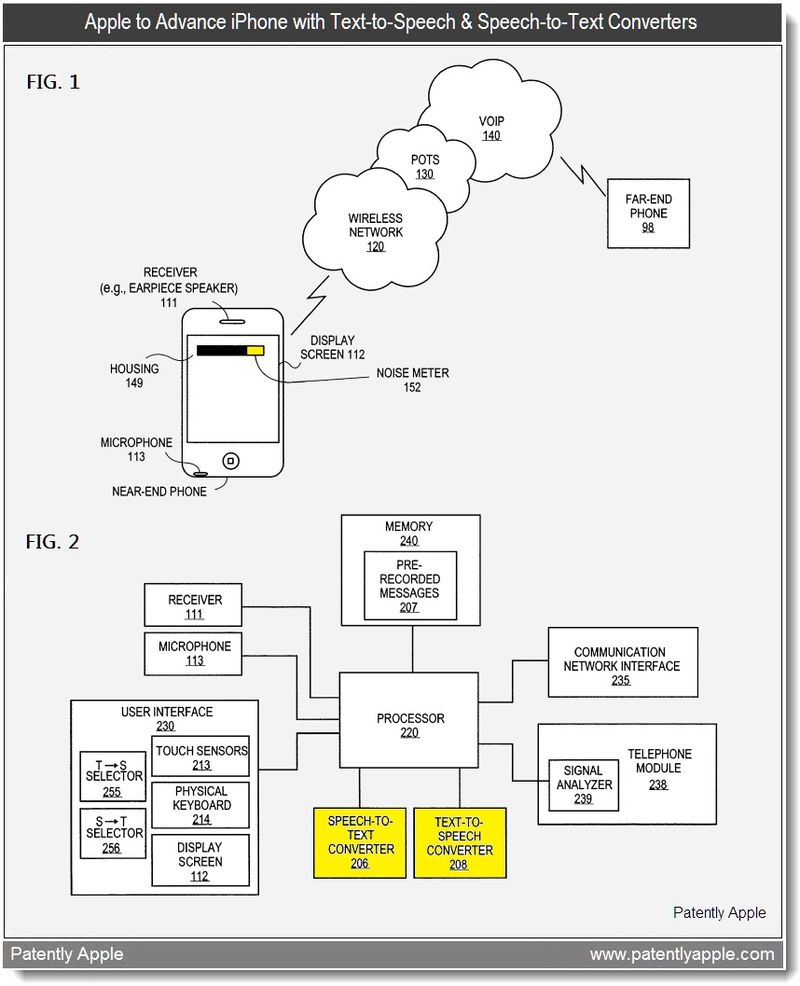 In one embodiment, the microphone (113) could be used to monitor the noise level in the environment surrounding the near-end phone 100. In an alternative embodiment, a separate microphone could be used to monitor the environmental noise. A noise meter (152) may be shown on the display screen to indicate the detected noise level. The noise meter may be shown when a phone call is made or received, when the noise level reaches the vicinity of a pre-determined threshold, or as long as the near-end phone is powered on. The noise level may be indicated by the noise meter by colors, numeral values, height or length of a bar indicator, etc. 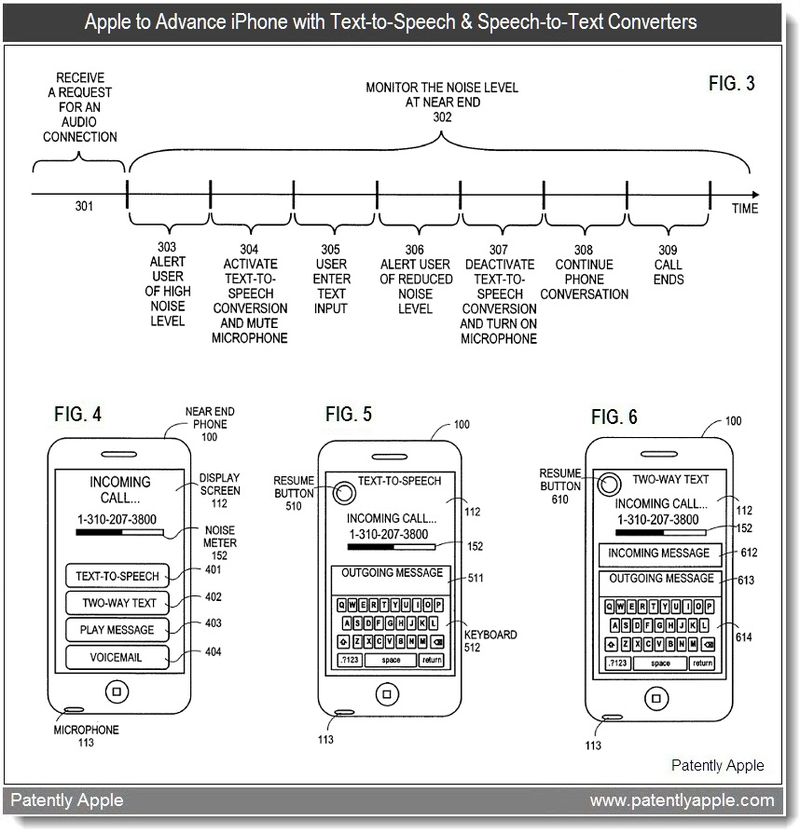 About Apple's patent FIG. 4: in response to the detection of the relative or particular noise level at the near end, the near-end phone displays a number of options for the user to choose. The options may include: text-to-speech, two-way text, play (pre-recorded) message, and voicemail. The user may select one of these options using a physical button or a virtual button. In one embodiment, the near-end phone also displays the noise meter on the display screen to provide a visual indication of the environmental noise level at the near-end.

About Apple's patent FIG. 6: if the user selects the two-way text option, the display may show "TWO-WAY TEXT" to indicate that both of the text-to-speech and speech-to-text conversions have been activated. The near-end user may use a physical keyboard or a virtual keyboard to input text messages. The display shows an incoming message area 612 for displaying the text converted from the far-end user, and an outgoing message area 613 for displaying the text entered by the near-end user. The established audio connection carries two-way voice signals between the near-end and the far-end users. The conversions from text to speech and from speech to text are performed by the near-end phone. The far-end user could speak to the far-end phone in the same way as in a normal telephone conversation that does not involve text messages. 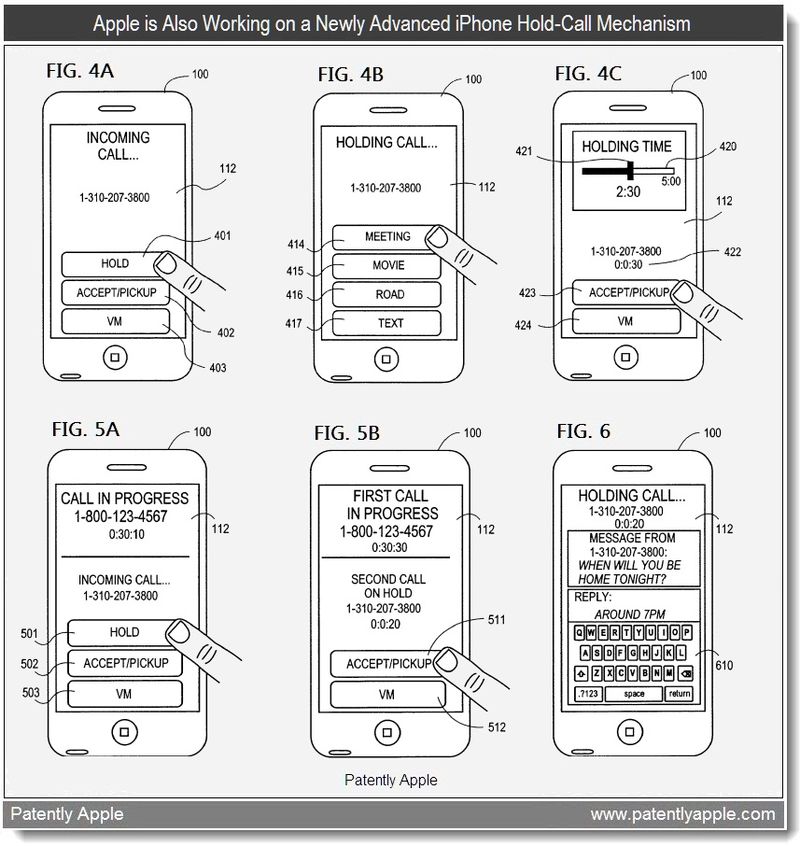 FINALLY, I was wondering why nobody introduced software like this before. Wake up companies... this shouldn't have taken so long!!

@ Michel, what a great idea about providing subtitles. I have French relatives and I don't speak much French. Would I appreciate subtitles - yes of course. Maybe someone at Apple will take up that challenge. Cheers - Michel!

This is very cool. Speaking many languages (English being my 3rd language), it is sometimes difficult to hear/understand people (or be understood) in noise locations. I think the next step is to provide this feature on video conferences (re: offshore/remote teams) and provide subtitles and automated translation. Sounds like a Star Trek episode but I can definitely see business value in this.