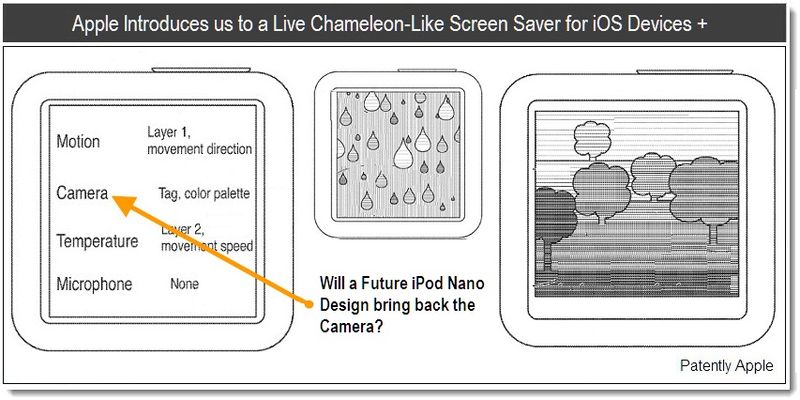 Apple filed their "Apple" trademark in China this week which we noted as carrying an interesting twist. We noticed that Apple had, for the first time, emphasized fashion accessories and precious metals for jewelry, a watch and more in association with their brand name in a very succinct way. That just happens to fall in nicely with a new Apple patent application that was published this morning by USPTO that specifically points to using a next generation iPod nano as a fashion accessory. The unique aspect of this accessory is that it will implement a wild new dynamic screen saver system that could sense the environment it is in and in a chameleon-like fashion automatically change the screen saver accordingly. The patent even indirectly hints at a camera returning to the iPod nano which would support several on-going rumors.

As another example, a screen saver element could include an animated animal traversing a background (e.g., a fish swimming across an underwater image). These screen savers, however, do not vary; the elements always move in the same manner, and the color scheme used for the screen saver evolves in a predictable and preordained sequence.

Apple's patent covers systems, methods and computer-readable media for displaying dynamic tags or screen savers that change based on detected characteristics of the user's environment. In particular, the patent covers dynamic tags that could serve as a fashion accessory by changing based on characteristics of the user's environment.

Sensors for Speed, Direction and the Earth's Orientation

For the Fashion Conscious

To ensure that the displayed tag remains of interest to the user, the electronic device could dynamically change the appearance of the tag based on the evolution of the sensor outputs. For example, if the electronic device determines from the camera that the color schemes of the user's room have changed, the displayed tag could adjust to reflect the new detected colors.

The Exemplary Embodiment is the iPod Nano!

To obtain information about an environment, Apple states that the device could monitor the environment, for example by receiving a signal from any suitable sensor or circuitry coupled to or associated with the device. For example, the device could monitor an environment by receiving a signal from an accelerometer, camera, microphone, magnetic sensor, thermometer, hygrometer (e.g., a humidity sensor), physiological sensor, any other suitable sensor or circuitry, or any combination thereof.

It should be noted that while Apple's patent illustrations are all related to a future version of an iPod nano, the fact is that the patent states that their invention will also apply to the iPhone, iPod Touch (PDA), iPad (tablet) and other devices which includes a laptop, gaming device and even medical equipment. 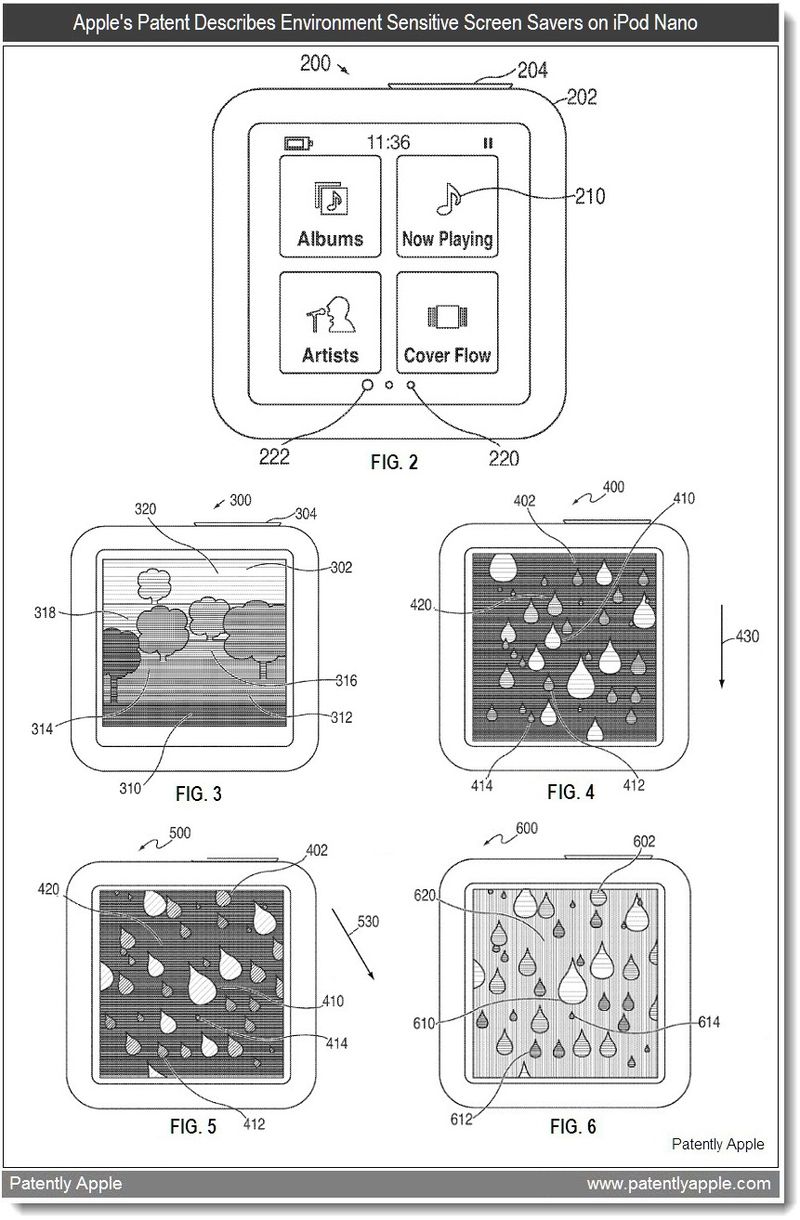 In particular, one layer could include large white raindrops while another layer could include medium sized light blue raindrops and/or have another layer including small turquoise raindrops. The particular colors selected for the layers could be such that the colors range from white to different shades of blue that progressively approach the color of background 420. Although only three layers were identified in the screen saver noted above, it will be understood that the screen saver could include any suitable number of layers, and in particular layers for each size and color scheme of the displayed elements.

The elements of each of the layers 410, 412 and 414 could move in any suitable direction and at any suitable speed. For example, and as described above in connection with FIG. 3, each layer can move in the same or different directions, and at the same or different speeds. In some embodiments, one or more of the direction and speeds could be determined from the output of one or more sensors associated with the electronic device.

In patent FIGS. 4 and 5 we see a particular implementation in which the direction and/or movement of the rain is related to the output of a motions sensing component. In particular, the motion sensing component could determine the angle of the device relative to the gravity vector, and change the direction of the layer movement to match the gravity vector. This approach could provide a realistic animation by which the rain of the screen saver falls towards the ground, and not away from the ground even when the device is tilted. 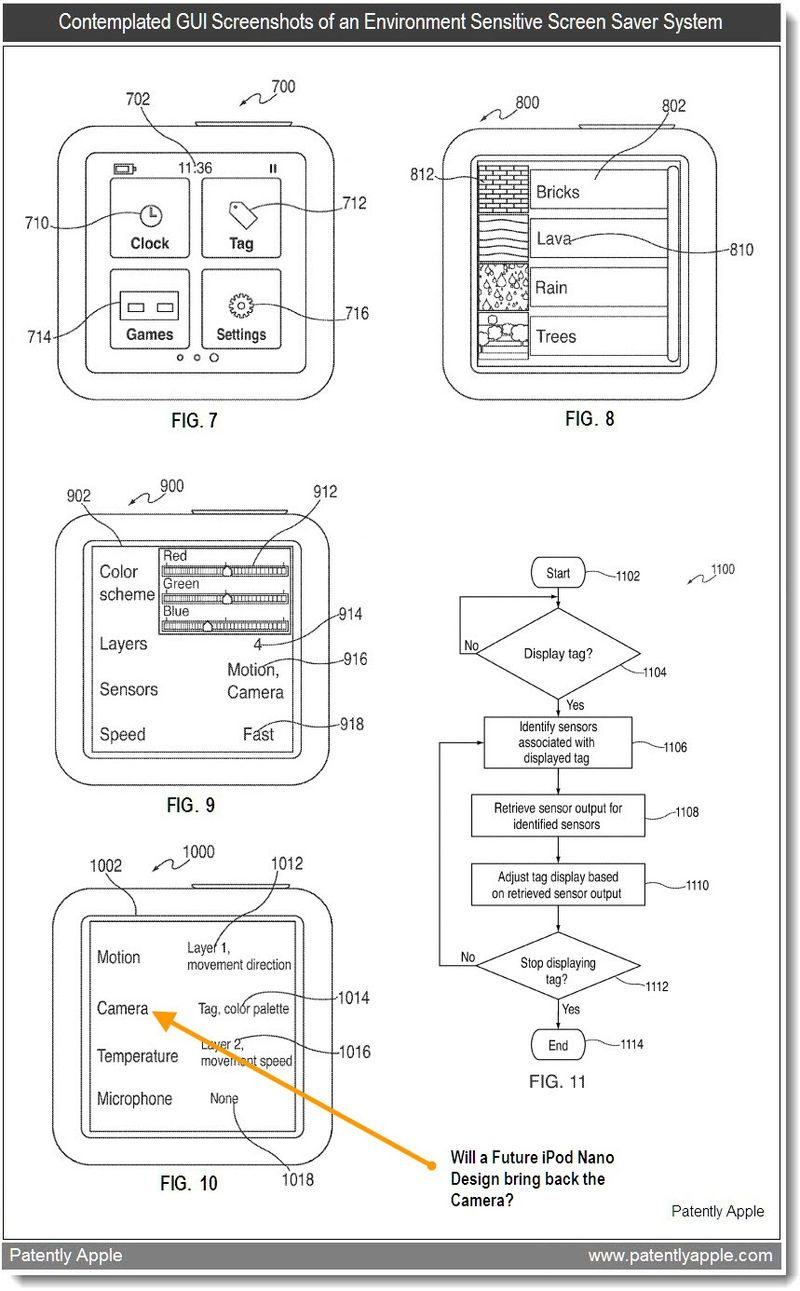 More on the Camera Option

According to Apple's patent, a user will be able to select camera option 1014 to define the tag characteristic associated with the images captured by the camera. In the example of FIG. 10, the camera output is associated with the color palette of the entire tag. In some embodiments, the user will be able to further define the specific correlation between captured images and the color palette (e.g., by selecting option 1012). In some embodiments, a particular sensor may have a limited number of tag characteristics with which it could be associated. For example, a camera may be limited to color related tag characteristics. Option 1014 could therefore restrict the available characteristics that the user could select for the camera output.

Back on March 7, 2011 an anonymous tipster told us that Apple's iPod nano would not only bring back a built-in camera but also introduce FaceTime. We filed that tip in our X-File. On April 2, 2011, 9to5 Mac posted a photo illustrating an iPod nano with a camera hole in place from Apple.Pro who updated their first report. Rumors aren't facts – but when they persist you have to wonder if someone in know is trying to get the word out about a new feature to further frustrate Apple's competitors. Time will tell.