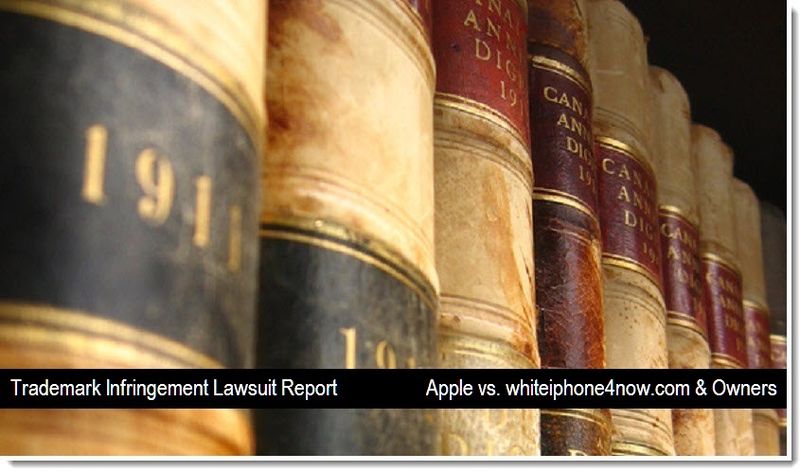 Apple is bringing an action against Defendant Fei Lik Lam, a/k/a Phillip Lam and his business whiteiphone4now.com, seeking damages relating to Defendant Lam's infringing and diluting Apple's famous trademarks, in willful violation of the Lanham Act and for engaging in deceptive practices and unfair competition in willful violation of New York state law. This report covers Apple's formal complaint and their detailed argument under the title "Defendants Misappropriation and Unauthorized Use of Apple's Trademarks" which you just might find to be very interesting. Fei Lam is the New York teen who made the headlines last year for selling White iPhone Conversion kits  prior to Apple's official launch. Report Updated.

Within Apple's formal Complaint document filed with the court the make their case that they are the owners of the "Apple" and "iPhone" trademarks. A few of the points included in their court document states the following: "Apple is owner of numerous valid, subsisting and existing U.S. Federal trademark registrations, including but not limited to the Apple logo, Registration numbers 3,679,056 (the "Apple Logo") and iPhone trademark, 3,669,402 (the "iPhone Trademark") (collectively the "Apple Trademarks").

The Apple Trademarks have become incontestable within the meaning of 15 U.S.C. § 1065. Apple also owns valid and subsisting common law rights to the Apple Trademarks as a result of its extensive, continuous and exclusive use of these marks throughout the United States and the world to identify its distinctive electronic products and services, as well as its iPhone mobile handheld telecommunications devices.

The Apple Logo and iPhone Trademark are distinctive, iconic and famous trademarks that are instantly recognized as indicating products and services created, designed, manufactured, produced and /or provided by Apple." 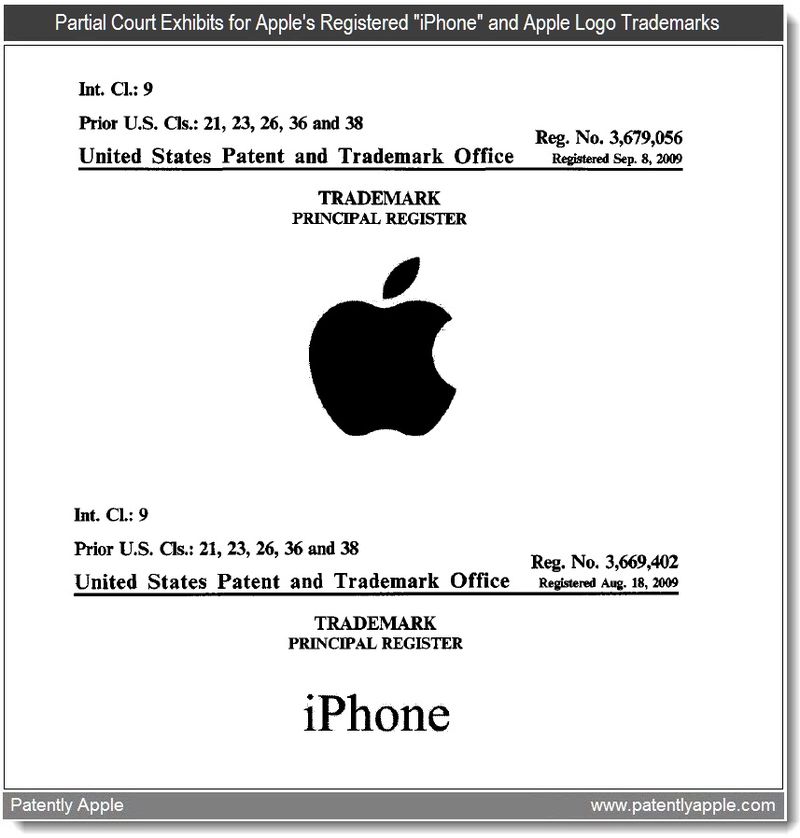 Nature and Basis of Apple's Action

According to court documents, Apple is bringing an action against Defendant Fei Lik Lam, a/k/a Phillip Lam and his business whiteiphone4now.com, seeking damages relating to Defendant Lam's infringing and diluting Apple's famous trademarks, in willful violation of the Lanham Act (15 U.S.C. § 1051 et seq.) and for engaging in deceptive practices and unfair competition in willful violation of New York state law.

Defendant Lam willfully and without authorization has used Apple's trademarks in connection with the sale of his "White iPhone 4 Conversion Kits," which among other things included white front and back panels branded with Apple's logo and "iPhone" trademarks that are used in connection with the promotion and sale of Apple's well known iPhone 4 handheld mobile digital electronic devices. Defendant at all times knew that Apple never has authorized the sale of white panels for its iPhone 4 mobile devices, and that he obtained these panels from sources that were not authorized by Apple or any of its suppliers to sell them.

Defendants Dunweh Lam and Yuk Lam are the parents of Defendant Fei Lik Lam ("Defendants D& Y Lam"). These defendants aided and abetted Defendant Lam in his willful infringement of Apple's trademarks by allowing Defendant Lam to engage in the misconduct alleged herein and under their supervision.

Apple owns the federally-registered trademark Apple logo and the trademark "iPhone" for use in connection with, among other things, telecommunications products and services. Apple has invested enormous sums of money not only in research and development to ensure all of its products are of the highest quality, but also to advertise and publicize its Apple and iPhone trademarks, which are very successful and well known.

As a result of Defendants' misconduct, Apple seeks to recover the injury and damages it has incurred, including but not limited to the recovery of the illegal profits Defendants gained from their misconduct and Apple's expenses in prosecuting this matter.

Defendants Misappropriation and Unauthorized Use of Apple's Trademarks

All iPhone 4 mobile handheld electronic devices that Apple has sold since its introduction to the market in June 2010 have utilized black front and back panels. The back panel contains the distinctive Apple Trademarks.

Apple has not sold white front or back panels branded with the Apple Trademarks or otherwise for the iPhone 4 mobile devices anywhere in the United States or the world.

Upon information and belief, Defendant Lam was aware at all relevant times that Apple has not authorized the sale of a white iPhone 4, or of any white front and back panels for its iPhone 4s branded with the Apple Trademarks.

Upon information and belief, Defendant Lam commenced his website ww.whiteiphone4now.com in or about July 2010, the sole business of whichwas to sell "White iPhone 4 Conversion Kits."

According to Defendant Lam's website, the White iPhone 4 Conversion Kits included white front and back panels for the iPhone 4 branded with the Apple Trademarks.

Defendant Lam's website stated that Apple had not authorized the sale of any White iPhone 4 mobile handheld telecommunication devices at all relevant times, and that it was Apple's intention to do so sometime in July 2011.

Upon information and belief, Mr. Lam initially arranged for the purchase of the white front and back panels branded with the Apple Trademarks for his iPhone 4 Conversion Kits from an unauthorized supplier in Shenzhen Province in the People's Republic of China, whom he knew in turn had purchased these white panels from shops on the streets of Shenzhen.

Defendant knew that the parts he was obtaining for his Kits were not authorized for sale by Apple. Defendant's supplier in China referred to its business as "Focusupply- Connection with Apple repair Parts and Friends with Foxconn Worker." Upon information and belief, Focusupply was owned and operated by Mr. Alan Yang, who resided in Shenzhen Province in the People's Republic of China.

At all relevant times, Foxconn was an authorized manufacturer of electronics and parts for Apple in China, but Foxconn was not authorized by Apple to sell white front or back panels for the iPhone 4 to the market.

Prior to commencing the Kits via his website, Defendant Lam asked Mr. Yang via instant messaging what relationship Focusupply had with Foxconn, and he was told that "I have a friend on [sic] this company."

Defendant Lam knew or should have known that the white front and back panels branded with Apple's Trademarks that he used in the White iPhone 4 Conversion Kits were not from authorized suppliers, dealers, or agents of Apple, or from Apple itself.

In or about July 3, 2010, Defendant Lam and Mr. Yang had another electronic conversation, in which Mr. Yang stated that he changed couriers from DHL to EMS over the last several shipments, because "back cover lens is original with 'Apple' Logo," and that he had "custom trouble on Hongkong custom," to which Defendant Lam replied, "ah that's right, the trade mark issues."

In yet another electronic conversation on or about July 13, 2010, Mr. Yang advised Defendant Lam to use EMS for shipping "just to be safe," because "las[t] week I have one shipment hold by Hongkong [sic] custom due to the original apple logo," to which Defendant Lam responded, "oh, that's too bad."

Despite his knowledge that the white front and back panels he is purchasing from Focusupply in China are unauthorized and not legal sales, Defendant Lam nevertheless launched www.whiteiPhone4now.com, and registered that domain name using the Apple Trademarks without the consent of Apple in July 2010.

In his website, Defendant Lam offered White iPhone 4 Conversion Kits to convert black iPhone 4 mobile devices to white utilizing white front and back panels branded with Apple's Logo and iPhone Trademarks for sale to the general public. Defendant Lam feature pictures of white iPhone 4 front and back panels branded with the Apple Trademarks prominently in his website.

A true and correct excerpt from his website in which Mr. Lam used Apple's Trademarks is attached hereto as Exhibit B. Defendant Lam sold the White iPhone 4 Conversion Kits for approximately $129 to $279 per Kit.

On numerous occasions, Defendant Lam publicized to industry press and on the internet that consumers could convert their iPhone 4 devices to "white" iPhone 4s by utilizing his White iPhone4 Conversion Kits, which included white panels branded with the Apple Trademarks. Defendant Lam boasted that his sales as of November 20 I 0 exceeded $130,000.

Later that day, on December I, 2010, the www.whiteiPhone4now.com website was no longer available on the internet.

Defendants have never been authorized to sell any Apple products, or to use any of Apple's Trademarks in connection with their business, services or products.

Defendant Lam's use of the Apple Trademarks in his website's domain name, throughout his website (including photographs) and on the panels in his iPhone Conversion Kits confused and deceived purchasers and the consuming public as to the source or origin of the Apple products being sold, advertised and promoted by Defendant Lam. Actual and potential purchasers and consumers in New York, and in this Judicial District and throughout the United States, upon visiting Defendant Lam's website, www.whiteiPhone4now.com, likely believed that Mr. Lam's panels branded with the Apple Trademarks for the iPhone 4 were properly licensed, approved, sponsored or endorsed by Apple for sale when they are in fact not.

As a result of Defendant Lam's illegal and unauthorized sales, as well as the result of Defendants D& Y Lams' negligent supervision and/or willful blindness to the misconduct of their son, Defendant Lam, Apple's business and good will has been irreparably harmed and Apple is entitled to permanent injunctive relief enjoining Defendants from any attempt to sell White iPhone 4 Conversion Kits utilizing panels branded with Apple's Trademarks, including without limitation any use of the Apple Trademarks to advertise, promote or sell such Kits and/or panels, and to permanently cease any use of the www.whiteiPhone4now.com website. Defendants also have failed to return the ill-gotten gains and profits they obtained through their misconduct.

Apple has filed six detailed Claims of Relief with the court covering such things as the Defendants must disgorge the ill-gotten gains and profits they obtained through their misconduct, and to compensate Apple for its expenses, including attorneys' fees, in connection with prosecuting this matter. Yet the formal Claims of Relief filed with the court are presented in six distinct parts as follows:

The case was filed in the United States New York Eastern District Court, Brooklyn Office. The presiding Judge in this case is noted as being Judge Roslynn R. Mauskopf with the referring Judge being Viktor V. Pohorelsky. Update: A Dismissal Without Prejudice by Apple was filed and the case file closed as shown below.

Community Sites that are Covering our Original Report