It appears that Apple may want to drum up a little more mystery and excitement going into this year's WWDC (World Wide Developer Conference) on June 6, 2011. Today, the European Trademark Office has revealed Apple's latest "Noteworthy" trademark filing. On the surface it appears to be a new iOS app – that may relate to providing OCR capabilities. If correct, it would support a February 2011 patent describing a future optical in-LCD sensing panel for the iOS devices: In other words – an App that could allow your iPhone to double as a scanner. Yet at the end of the day it's a blind trademark filing which keeps the door open to other possibilities. If you're a sleuth by nature, then check out our report's full detailing of Apple's International Class descriptions to assist your investigation. Report Updated. 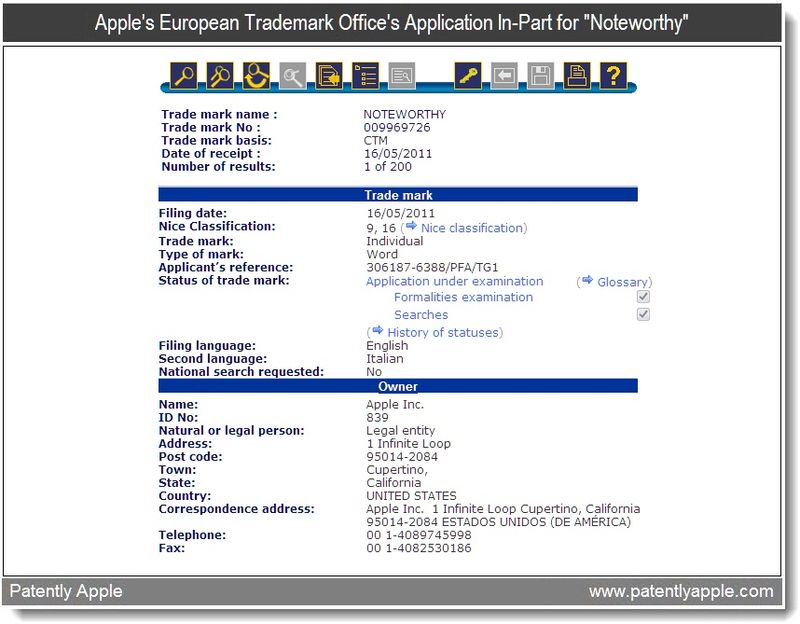 Apple asserts a claim of priority based on Jamaican application number 056901, filed in November 2010.

The last line of Class 009 covers magnetic media which could also relate to Apple's future iWallet. It should also be noted that although the timing of this trademark could be to drum up some excitement for Apple's WWDC, it may not surface at that time. Apple may be reserving it for a future event. We'll know soon enough.

It's also interesting to note that BGR is reporting today that multiple sources keep NFC on the table for sometime this year in respect to Apple Stores. In a way, that would fit in nicely with the iPhone doubling as a scanner as a means of sharing info like a sales receipt. Of course, it's just another idea of how this "Noteworthy" feature could be used. Then again, Apple likes to bury their intent and it could also be as simple as being associated with their current iPad Notes app. Update 2:30 MST: There was a "Noteworthy" typestyle added to a recent iOS upgrade for Apple's Notes app for certain iOS devices. For instance, the new typestyle isn't available for the second generation iPod touch but is available for the iPad and iPad 2. Whether this is the only application for the word "Noteworthy" is unknown at this time.

Here's a very intersting video. It makes you visualize the concept of the iPhone used as a wireless mouse as Apple's scanner patent illustrated in their patent graphics.

I think it is also likely "Noteworthy" refers to a possible Apple Cloud-based service using Nuance Technology, to turn speech to text (Notes) and vice versa, which could likely debut with iOS 5.

Isn't "Noteworthy" too generic to be Noteworthy - particularly if it is?

On the other hand, if it isn't then it can be, because no one (Microsoft et al) will think it is.

It's likely a font for iPad but maybe there's more to it, maybe not. But it's noteworthy nonetheless.

With a TM like Noteworthy, it's something simple like taking notes with a new ipen. I hope that wwdc is really about Lion and less on iOS.

Man, did Apple bury their intent on this one or what? Their legal team sure knows how to confuse anyone trying to figure out what this trademark is for. If it's for a font, then why didn't they just file class 16 and call it a day. It's short and sweet. But by overloading Class 9 it opens up the question, what are they trying to hide here? If I had to take a shot I'd say it's related to their current notes app. A long shot would be an app like Windows OneNote.

I think you're last point is correct. I think it's associated with a typestyle on iPad's notes app. It's the way Apple clogs up the classes field that's confusing. But that's the legal world for ya. I'd rather it be an iPhone scanner, but I don't think it is. Too bad.

I agree with you John. But this is a trademark and I think it's more about the scanner. Though an electronic wallet is certainly a candidate. Class 16 relates to printers. You don't think that Apple will re-introduce a printer do you? It's a stretch but who knows.

The scanner idea could really add value to the iPhone or iPod touch. I checked out one of the links in your report to the scanner patent and it looks like the back of the iPhone could also rest on a table near your iMac or Macbook and double as a mobile wireless mouse. It's this dual nature of this app or feature which could provide super value.