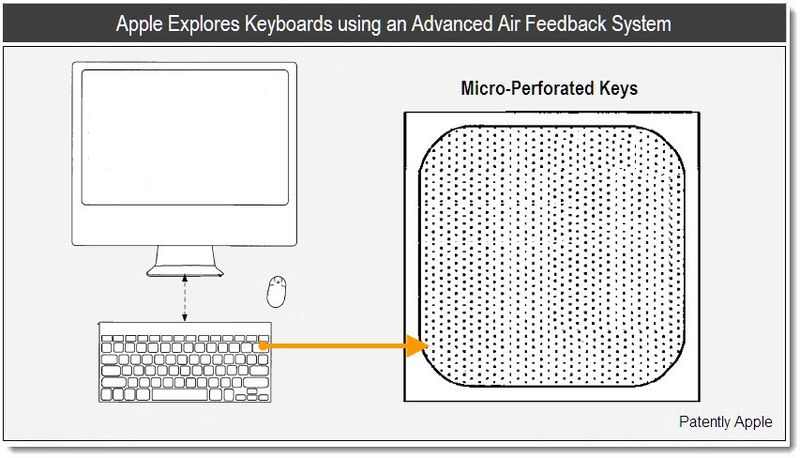 This appears to be the year of the keyboard. Apple began the year working on several keyboard projects including one involving a leap to a next generation virtual keyboard system for desktops while working on a secondary parallel bridging keyboard project that involved implementing a hybrid keyboard using advanced motion tracking. In Apple's latest keyboard project, which was published today by the US Patent and Trademark Office, we see a more practical approach to advancing keyboards in the shorter scheme of things by using advanced sensors and a unique air-based feedback system primarily for Mac keyboards. In the longer scheme of things, Apple is actually eyeing the concept of using deformable keyboard systems.

As a result of ever thinner computer designs such as the MacBook Air, input devices associated with those devices, such as keyboards and key pads, have become correspondingly smaller with lower-profiles for both practical and esthetic reasons.

In the cases of input devices such as keyboards and key pads, a relatively lower profile design dictates keys with relatively reduced travel relative to more conventionally sized devices. However, that reduced travel also changes, and typically limits, the tactile feedback experienced by a user. Thus, in many cases, such reduced travel input devices do not provide a fully satisfactory user experience for users accustomed to more conventional designs. In many cases, this less than fully satisfactory user experience includes less than satisfactory tactile feedback to the user, due to the limited travel of the keys.

Apple's patent covers embodiments of input devices for computing systems as well as methods of operation of the input devices to provide enhanced user experiences. In some examples, the user experience will be impacted by a change in the tactile feedback relative to conventional devices. One example of changed tactile feedback as described herein includes providing feedback to a user before actual contact with the key. That may be done by detecting the proximity of a user to a key of the input device that suggests an imminent user actuation of the key, and in response to detected proximity, to flow air from the input device proximate the key in question to provide tactile feedback to the user before physical contact with the key surface. In some cases, the air pressure may be applied in a manner to oppose motion of the user toward the key surface.

In the embodiments wherein air is expelled from the input devices, such as through apertures (preferably micro-perforations) in the keys, the objective is to provide a tactile user interaction even before contact with the key. For example, since the key travel will be relatively limited, air can be used to engage a user's finger even before contact with the key, to provide resistance to the user prior to actual contact. In these systems, the presence of a user can be detected at a proximity that is identifiable as likely indicating that physical actuation of the key is imminent, and that sensed proximity can be used to trigger the expelling of air proximate the key to provide a resistance sensation to the user.

In Apple's patent FIG. 4B below we see a top view of a key assembly illustrating a key surface which includes a plurality of openings (410) depicted as micro-perforations. Other sizes of opening are also possible, so long as they permit air flow at an appropriate volume for the specific application. 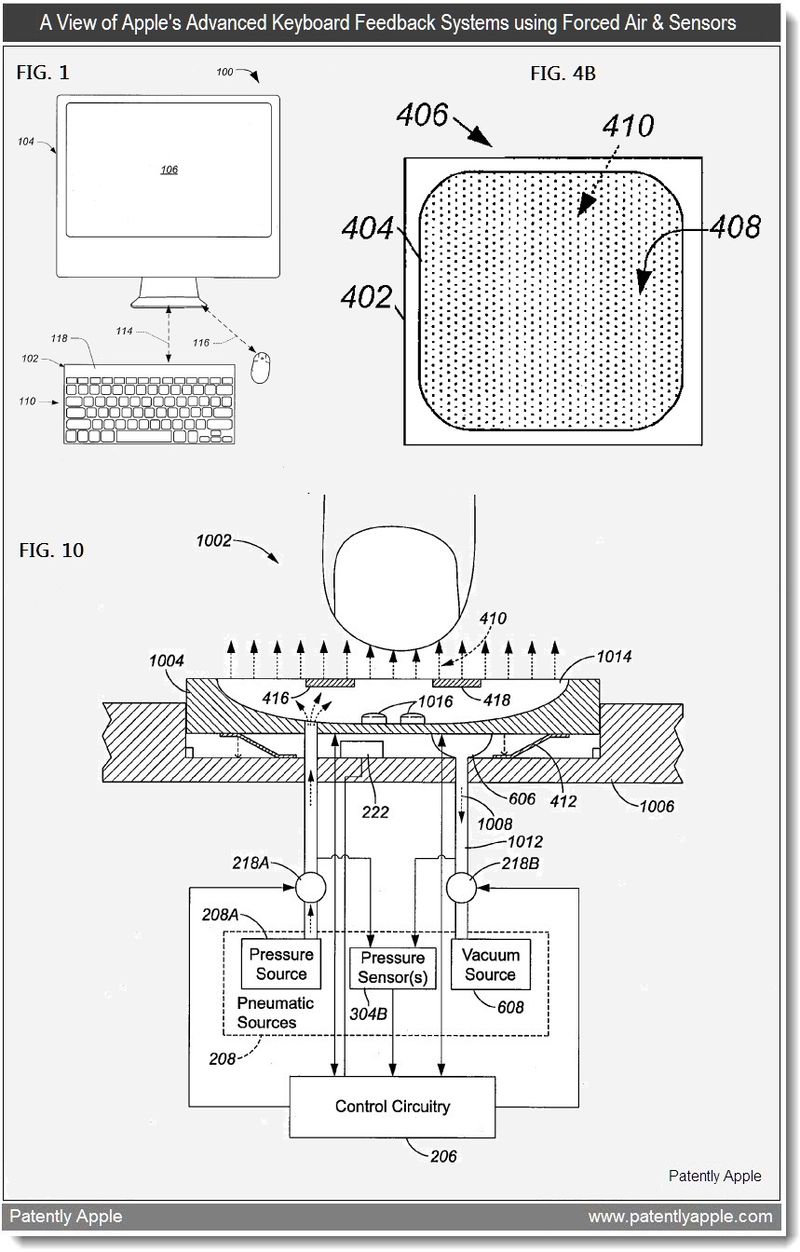 As an alternative to a generally uniform grid of micro-perforations, Apple is considering using one or more light sources, such as LEDs, to illuminate the key through the perforations. Alternatively, such LEDs may be used in an optical proximity or contact system, to detect the presence of a user, as described herein.

The System could also apply to Virtual Keyboards on iOS Devices

As a twist to this patent, Apple goes on to describe that flowing of air could also be implemented in a virtual keyboard, wherein each key location is merely a defined region on a solid surface, where contact with that surface region will generate a defined input signal.

Such virtual keyboards may have no moveable surfaces. In such configurations, notwithstanding the absence of a moveable surface, the flowing of air through apertures in the surface may be used to provide a tactile resistance to a user's actuation motion and/or to absorb at least a portion of the actuation force.

The System could also apply to Deformable Keyboards

In another alternative configuration, the key assemblies might not be in the form of a mechanical key but rather include deformable regions. Such deformable regions may be formed of compressible materials (such as a gel or foam), by an air-filled (or other gas filled) pocket, or by a supported membrane. This was discussed in great detail by Apple in a June 2010 patent which described shape shifting device interfaces. 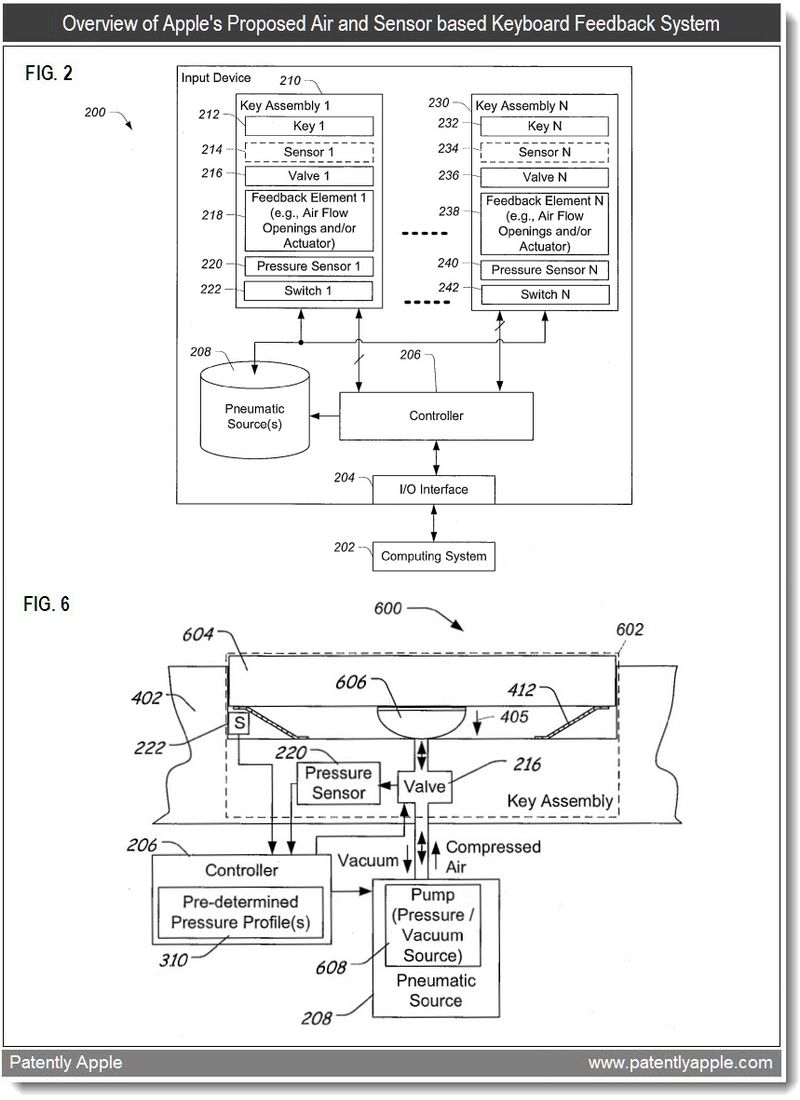 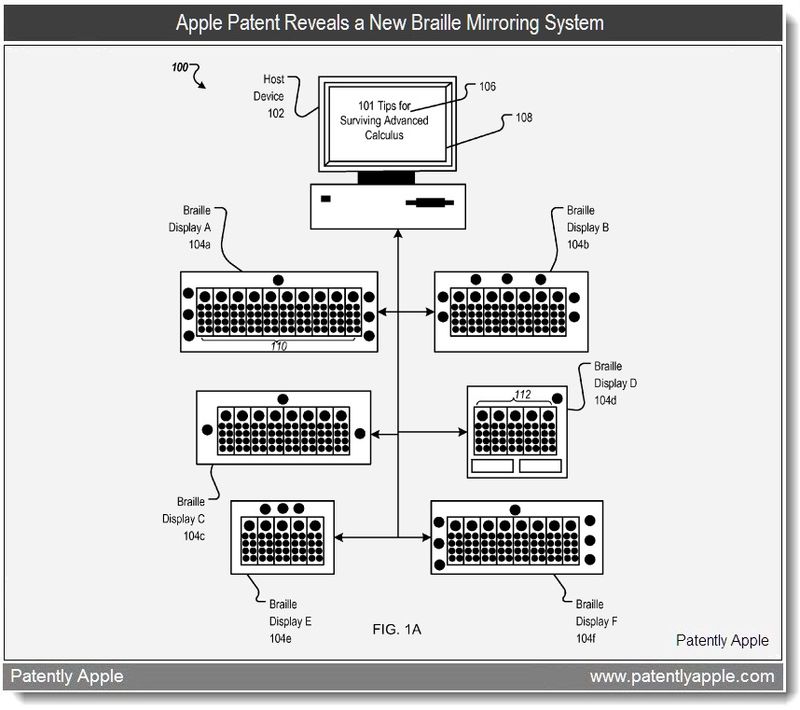