Apple Didn't Get the Memo: Files for Thunderbolt Trademark in US

Intel's Senior Manager of Communications Dave Salvator supposedly told Bright Side News on May 19, 2011 that "As part of our collaboration with Apple, they did some of the initial trademark filings" for Thunderbolt but that they have full rights to the trademark. That's interesting in light of Apple's latest filing for Thunderbolt as revealed by the USPTO this weekend. The official filing was dated May 6, 2011. The filing date would appear to contradict Intel's statement, as May 6, 2011 is way past the so-called "initial" time frame. Additionally, as of this date, we see that Apple's Thunderbolt webpage still refuses to acknowledge Intel's trademark at the bottom of their page which is common courtesy and professional practice. Was it political posturing on Intel's part to claim that they own full rights to Thunderbolt or just a late filing by an Apple attorney that wasn't aware of the so-called transferring of this trademark? The bottom line is that Apple has filed a new application for Thunderbolt and it's their fourth this year. 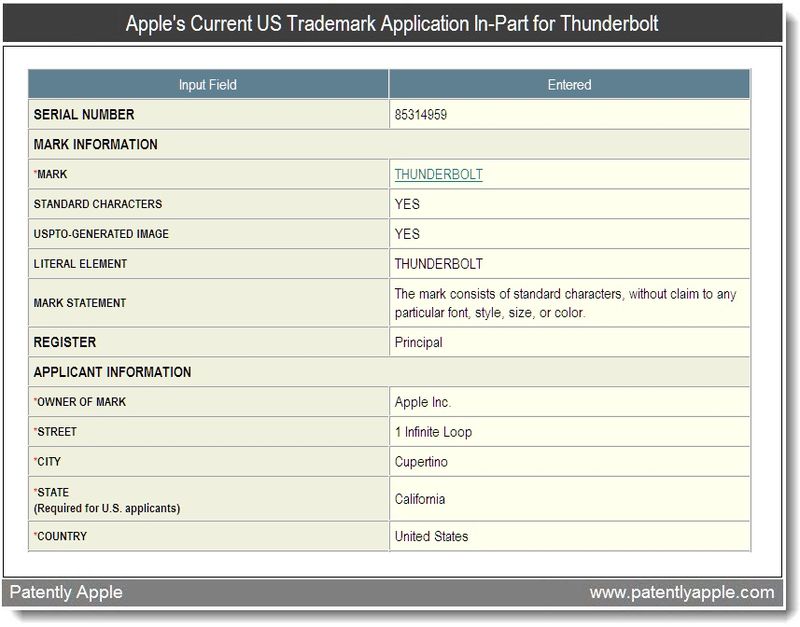 Until Apple makes a formal statement acknowledging that they've made this trademark transfer to Intel or updates their Thunderbolt webpage to acknowledge Intel's trademark, we'll continue to report on any new Apple based Thunderbolt trademark activity.

@ Jay - The report is stating in hindsight that Apple filed for the original trademark and is now transferring that trademark to Intel. That portion of the report isn't in quotes and so we can't tell if this was just a blogger running away with a statement and adding imaginary context or fact. But that's the part that insinuates that Apple is giving in to Intel and that's still just one side of the story. To me it's just a PR game on Intel's part.

Intel continues to hire incompetence for it's marketing. Apple wouldn't be filing trademarks if it weren't their Technology that they shared and later jointly developed with Intel.

Intel's statement is that they have "full rights." I didn't see the statement that Intel "owned" the trademark.