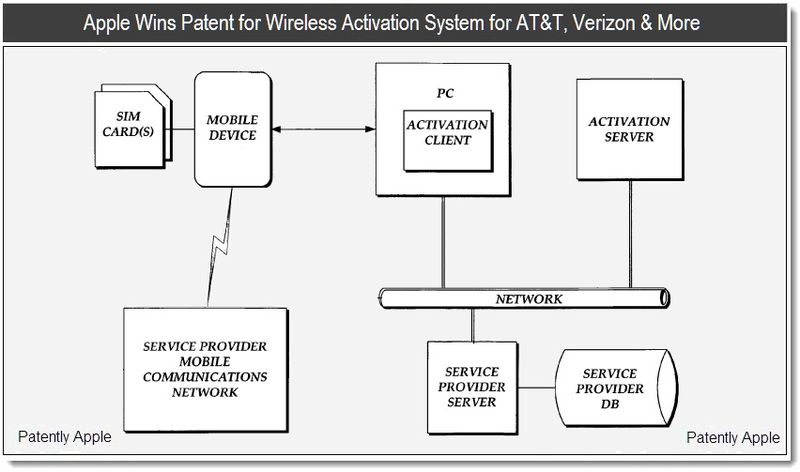 The US Patent and Trademark Office officially published a series of 18 newly granted patents for Apple Inc. today. In our second report of the day we cover Apple's granted design patents relating to their polycarbonate MacBook and the user interface for their "Maps and Compass" application. More interestingly we cover Apple's data center call queuing system as well as a very interesting and detailed patent revealing Apple's service provider activation system used by AT&T, Verizon and others. This is a first-time peek at Apple's system and so we try to provide you with a detailed overview to help you better understand the scope of this system.

Apple has been granted an important patent that relates to methods and systems for service provider activation in mobile iOS devices. 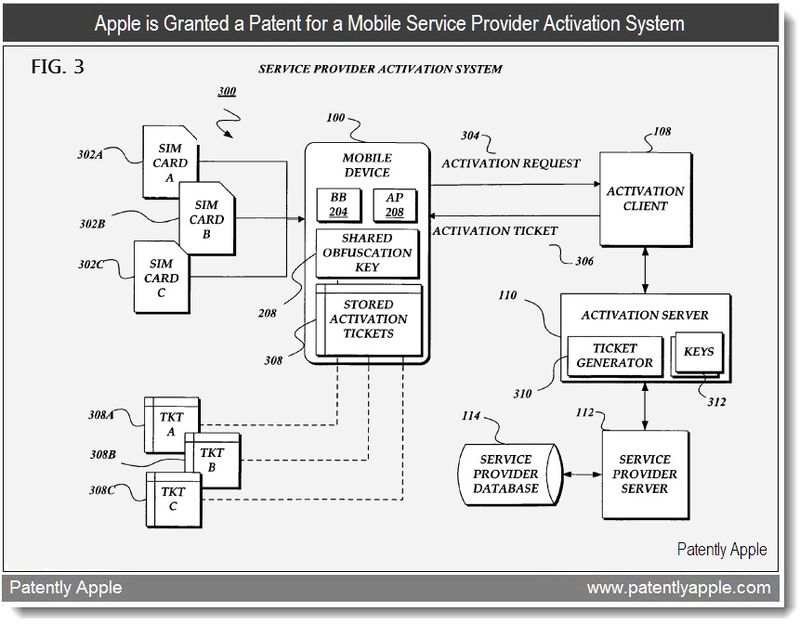 According to Apple's patent, mobile devices that are manufactured for use with the Global System for Mobile Communications (GSM) digital cellular phone technology are designed to work with any mobile communications network service provider. The device requires the use of a subscriber identity module (SIM), referred to as a SIM card, which must be inserted into the GSM device to sign on to the subscriber's service provider network. The SIM card is a small circuit board that contains, among other things, an identifier that identifies the service provider with which the SIM card is allowed to be used. Typically, each service provider, such as AT&T, or Verizon, is assigned their own range of SIM card identifiers for use with their networks.

From the consumers' point of view, most would likely prefer the freedom of purchasing a mobile device without being restricted to one particular service provider. For example, it may be desirable to switch to a different service provider when traveling abroad or to different parts of the country.

Apple credits Dallas De Atley, Jeffrey Bush, Jerry Hauck Ronald Huang and Brainerd Sathianathan as the inventors of Granted Patent 7,929,959. The inventors are all new identities to Apple and their locations may suggest that Apple acquired this patent at some point in time. Our cover graphic is FIG 1 of this patent.

Apple has been granted a patent relating to queuing calls for distribution in a data center. Apple's system generally relates to an automated call distribution system that routes calls between a network and call center sites. 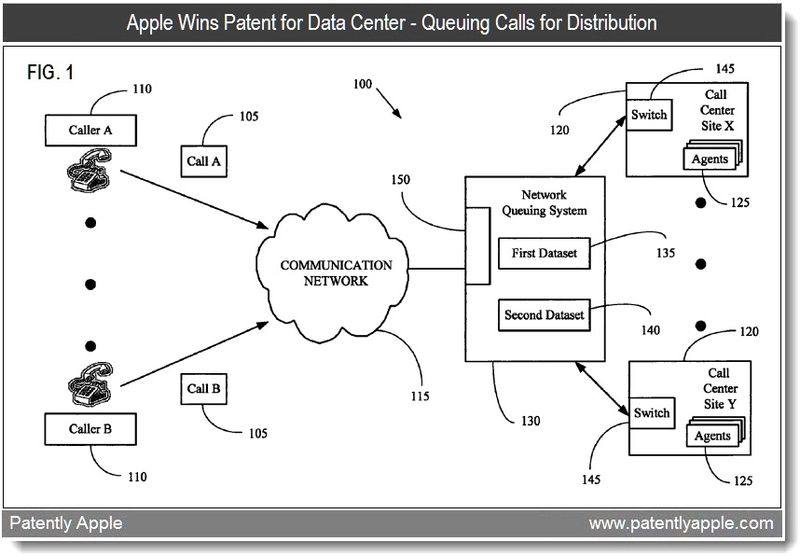 If this subject interests you, then Apple's invention is directed to overcoming or at least reducing one or more of the problems noted above. For details about this system, see granted patent 7,929,685. 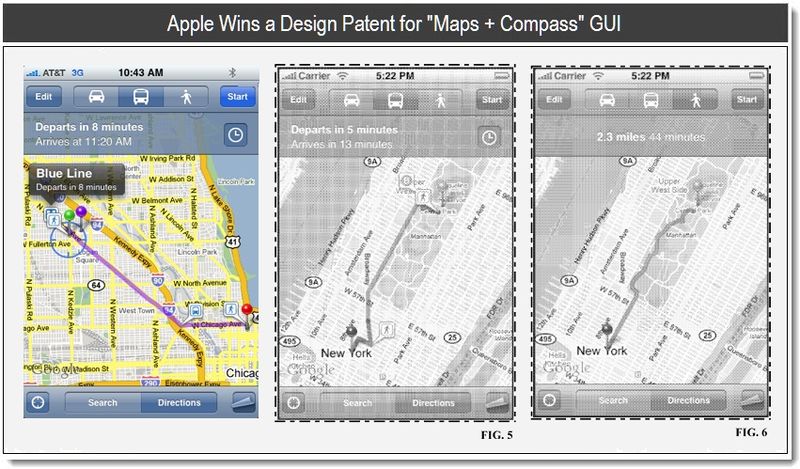 Apple credits Mike Matas as the sole inventor of Granted Patent D636,398 relating to the GUI for the iPhone app known as " Maps + Compass," originally filed in Q4 2008.

Apple has also been granted a design patent for their 2010 polycarbonate MacBook under patent number D636,389.

Update: as we could see by yesterday's latest lawsuit filing by Apple against Samsung, Design Patents matter. Apple is suing Samsung on a number of grounds including patent and trademark infringements. A number of Apple's icons being used as exhibits in the case include the following: 1) Phone (2) Settings (3) Photos (4) iTunes (5) Contacts, and (6) Notes. The lawsuit even touches on touch patents like 7,812,828 that we covered in October 2010.

IP attorney Matthew Macari commented on this current case in general by stating that "Design patents can be a very powerful litigation tool - the "wiggle room" of interpretation is much greater than many think and can provide a powerful enforcement tool for a Plaintiff in an infringement case." For more specifics about this case, check out both posts by Floriian Mueller and Nilay Patel.

Apple was granted a 2006 patent titled "File systems for data processing systems" that covers the latest advances relating to Apple's HFS + file system. They've also be granted a patent relating to iMovie. The patent covers technology that enables users to perform non-linear editing techniques on video footage such as cutting segments of the footage, re-arranging segments of the same video clip, re-arranging and combining segments of multiple video clips, and/or modifying the captured content by adding or substituting other content including audio tracks, voice-overs, titles, and transitions between frames.

Seems to me that companies are pushing harder than before to compete with competitors without doing the actual work of inventing new things rather just building on the work of others I think as this trend continues so will the cases of patent infringement and patent enforcement increase.