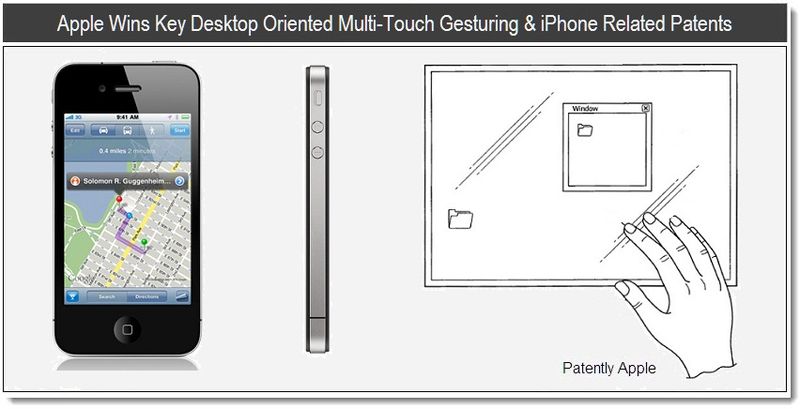 The US Patent and Trademark Office officially published a series of eight newly granted patents for Apple Inc. today. The most notable patents of the day cover such things as the iPhone's built in compass technology as well as its unique nitriding stainless steel conductive bezel antenna. And yet the one patent that stood out prominently this morning was one that focused on bringing advanced multi-touch gesturing to a desktop display. Apple first gave us a peek at the iMac Touch last summer and now we see some of the gesturing that such a unit could employ. At this point in time, it's impossible to estimate when such technology will come to market – but it's evident that Apple is working on several angles to this project and we'll only see it come to market when it's actually ready to rock'n roll.

Apple has been granted a patent for gestures that could emulate mouse functions under the title "Detecting gestures on multi-event sensitive devices." The interesting aspect of this patent is that it clearly focuses on hand gestures used on a desktop based touch display that would support Apple's tilting iMac-like desktop patent revealed last summer. 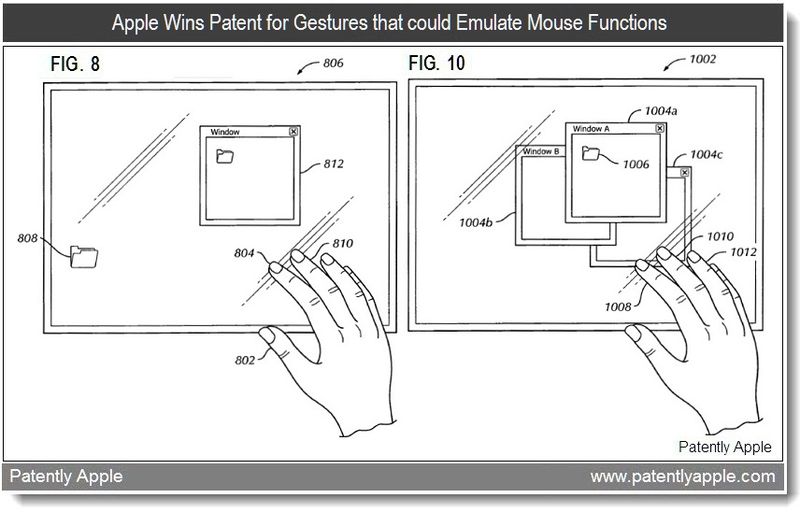 One of the key focuses of Apple's patent is on a desktop computer using a touch display. The patent points to operating systems like Linux and Unix to clarify it's not talking about iOS.

There's no mistaking that the patent isn't talking about using a trackpad or Magic TrackPad for desktop use. To clarify, Apple's patent background states that in recent times, more advanced gestures have been implemented. For example, scrolling could be initiated by placing four fingers on the touch pad so that the scrolling gesture is recognized and thereafter moving these fingers on the touch pad to perform scrolling events. The methods for implementing these advanced gestures, however, could be limited and in many instances counter intuitive. In certain applications, especially applications involving managing or editing media files using a computer system, hand gestures using touch screens could allow a user to more efficiently and accurately effect intended operations.

Apple's solution relates to detecting gestures with event sensitive devices (such as a touch/proximity sensitive display) for effecting commands on a computer system.

Specifically, gestural inputs of a human hand over a touch/proximity sensitive device could be used to control and manipulate graphical user interface objects, such as opening, moving and viewing graphical user interface objects. Gestural inputs over an event sensitive computer desktop application display could be used to effect conventional mouse/trackball actions, such as target, select, right click action, scrolling, etc. Gestural inputs could also invoke the activation of a UI element, after which gestural interactions with the invoked UI element could affect further functions.

By way of example, FIG. 8 illustrates an implementation of the above discussed gestural actions. As shown in FIG. 8, a single finger tap with a finger on a GUI object, such as file icon 808, could be translated into the equivalent of a single click of a mouse, which in this instance could indicate a selection. A single mouse click selection could be indicated by highlighting of the selected icon.

A detected double tap event on icon 808 could be translated into the equivalent of a double click of a mouse, which could invoke a launch or opening of an application the selected object. For instance, a double tapping of file icon 808 could open window 812 associated with the file icon.

In accordance with one embodiment, a drag-and-drop function could be invoked by touching sensor screen with at least one finger in close proximity to a GUI object and graphically dragging the GUI object to a desired drop location by maintaining the touch until the GUI object is at the desired location and then lifting the finger away from the sensor panel.

Apple credits Greg Christie and Wayne Westerman as the inventors of Granted Patent 7,924,271, originally filed in Q2 2007. Whether this technology is being earmarked for Apple's OS X Lion is unknown at this time.

Apple has been granted a patent relating to the iPhone's Maps + Compass App. More specifically, Apple's patent relates to the compasses accuracy indicators. 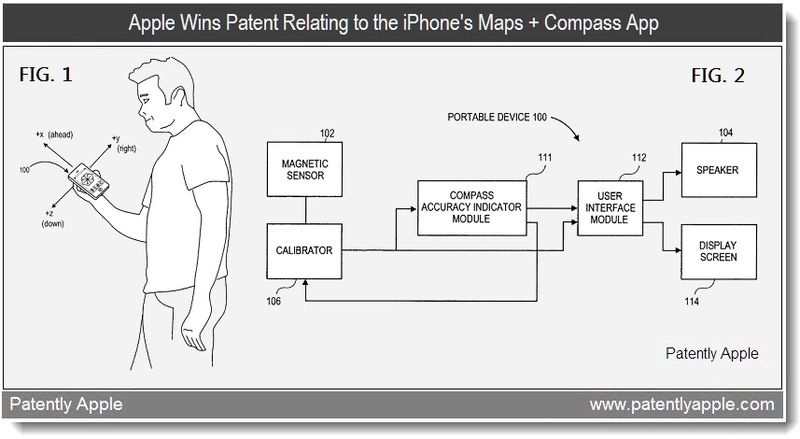 One of the drawbacks of electronic compass technology found in smartphones today is that the compass direction output are in error quite often due to being subjected to widespread and variable magnetic interference sources. This characteristic of the integrated compass may be ameliorated, by providing the end user of the portable device with suitable accuracy indications. This may be in the form of either an alert or as more specific information concerning compass accuracy, or both. The user's phone could then be provided with an update to correct this inaccuracy. 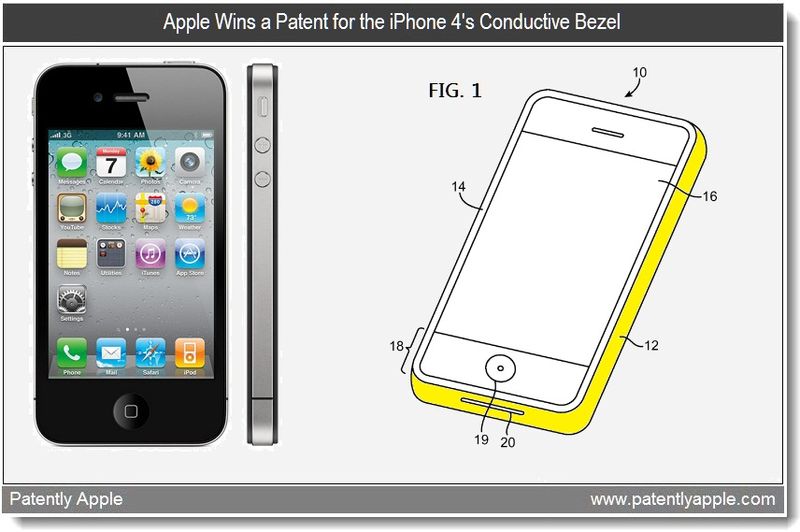 According to Apple's patent FIG.1, the housing may have a bezel. The bezel may be formed from a conductive material such as stainless steel. Apple describes the use of nitriding stainless steel for their bezel in a March 2011 granted patent specifically relating to that material.

Additionally the patent covers a ground plane element in the housing that may serve as antenna ground. The ground plane element may have a slot. The slot may be used to form a slot antenna or a hybrid antenna. In a hybrid antenna configuration, one or more antenna resonating elements, such as planar inverted-F antenna resonating elements, may be located above the slot. The bezel may be electrically connected to the ground plane element. The bezel may surround the slot while accommodating the antennas. This allows the bezel to provide structural support and to enhance the appearance and durability of the handheld electronic device. Even though the bezel surrounds the slot, proper operation of the antenna resonating elements that are formed above the slot is not disrupted.

Apple credits Robert Hill, Robert Schlub and Ruben as the inventors of Granted Patent 7,924,231 originally filed in Q4 2010 – though other filing dates are indicated, such as Sept 2009.

Apple has been granted four other patents today which cover such things as a system for color correcting a display for gray tracking; another relating to user account management for multi-user computer systems; yet another relating to methods and systems for managing storage devices associated with data processing systems; and finally, one that relates to minimizing power consumption in computer systems.

Apple has been granted a registered design in China under number 1002346.7. It was officially entered into the registry on April 01, 2011 and made public this week. 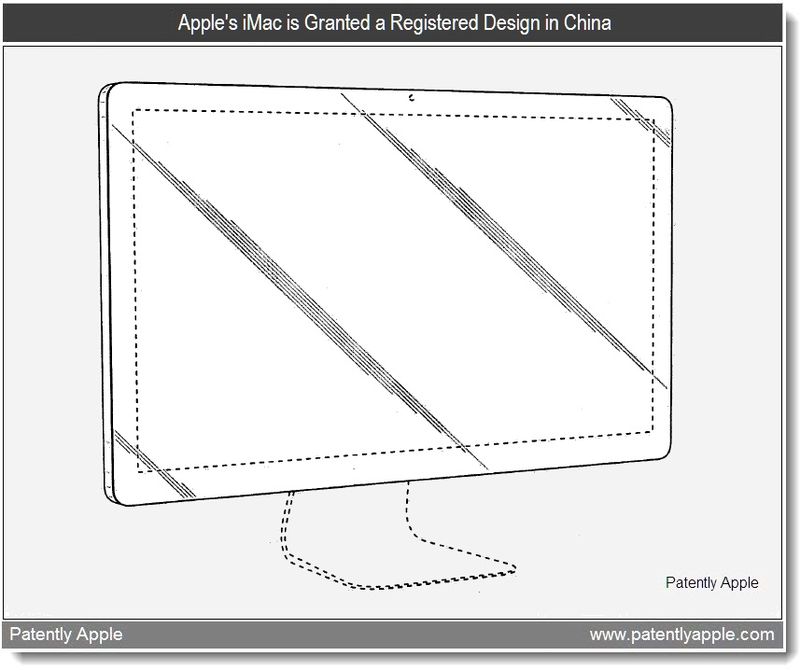 @Stephen, Maybe you don't remember the first tablet: Apple's Newton. Who's copying who?

It is amazing that some of these patents get approved. It used to be patents were for inventions which would not normally be thought of by an expert in the industry. How are specific gestures patentable? Multi-touch technology became available as a patentable technology. Simply conceiving new gestures is programming, product/Application customization, etc. SlashGear even made the joke about Graffiti in the Palm days referencing this article. If anything Apple is infringing on what could have been (perhaps is) the patent on Graffiti; the first "Rosetta stone" between the alphabet and PDA's.