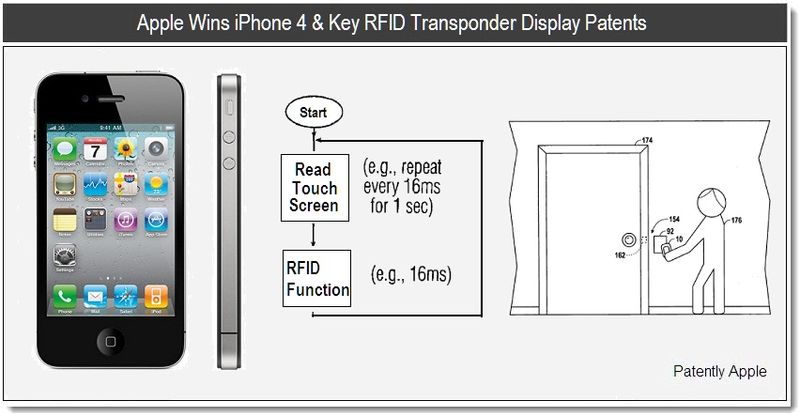 The US Patent and Trademark Office officially published a series of 18 newly granted patents for Apple Inc. today. In our first of two reports today we cover design wins for Apple's 2007 iPod touch and iPhone 4 in addition to covering Apple TV and a key RFID patent. The RFID patent covers technology that will be built right into future iOS devices that will enable such things as wireless transfers of data from an iPhone to a desktop with just a simple shaking motion or even allow a user to open up a keyless hotel or car door with a simple swipe. It will also likely play a role in Apple's forthcoming iWallet feature set.

Apple has been granted a major patent win for a touch display that could double as an RFID Tag Reader which Patently Apple first discovered and reported on back in October 2009. 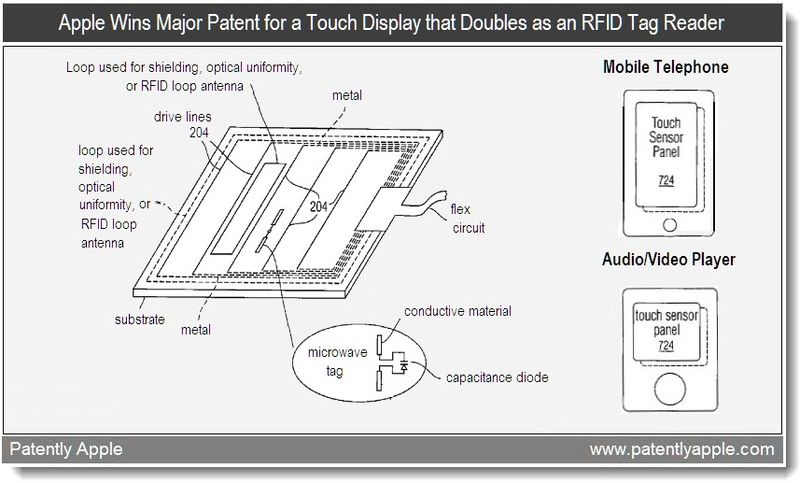 According to Apple's patent, RFID technology is becoming more and more prevalent in today's society. The technology could be advantageous because small, minimally invasive, unpowered remote units such as "RFID tags" could be unobtrusively placed in many items to identify them and provide information. Because these RFID tags operate without batteries or physical connections to other circuits, little or no maintenance is necessary. However, the base stations (BSs) or "RFID readers" needed to communicate with the RFID tags do require power and a larger "footprint," and are thus more difficult to integrate into various items.

For more information on this patent see our report "iPhone Display May Double as an RFID Transponder." Apple credits Michael Rosenblatt and Steve Hotelling as the inventors of Granted Patent 7,928,965.

It should be noted that this technology could be used to open keyless doors of a car or hotel room as presented in this patent or as demonstrated in these videos (see the bottom of the linked report). It may also play a role in Apple's future iWallet feature set.

Apple has been granted patents relating to both Apple TV and iTunes. 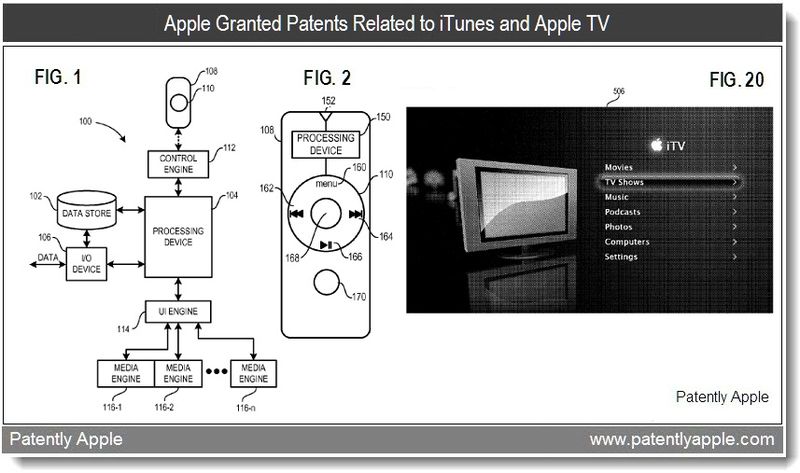 Apple's patent FIG. 1 is a block diagram of an example media processing system such as Apple TV. The media processing system transmits and receives media data and data related to the media data. The media data could be stored in a data store such as a memory device, and be processed by a processing device for output on a display device, such as a television, a computer monitor, a game console, a hand held portable device, and the like. Apple's patent FIG. 2 is the Apple Remote and FIG. 20 is illustrating the original Apple TV GUI that was called iTV.

While Apple TV was fast out of the gate, the device never caught on beyond a small faithful niche. Apple has toyed with various ideas for Apple TV but has called a hobby device because sales are anemic. However, Apple may be keeping their Apple TV brand name alive for a more ambitious project in the future, such an actual HDTV style consumer product. One can always hope.

Apple has won a design patent for the iPhone 4 with its distinguishing nitriding stainless steel ban. Although Mark Papermaster was supposedly fired after the iPhone 4's antenna design came into question, we now see that Steve Jobs is proudly credited as one of the designers of the controversial design. 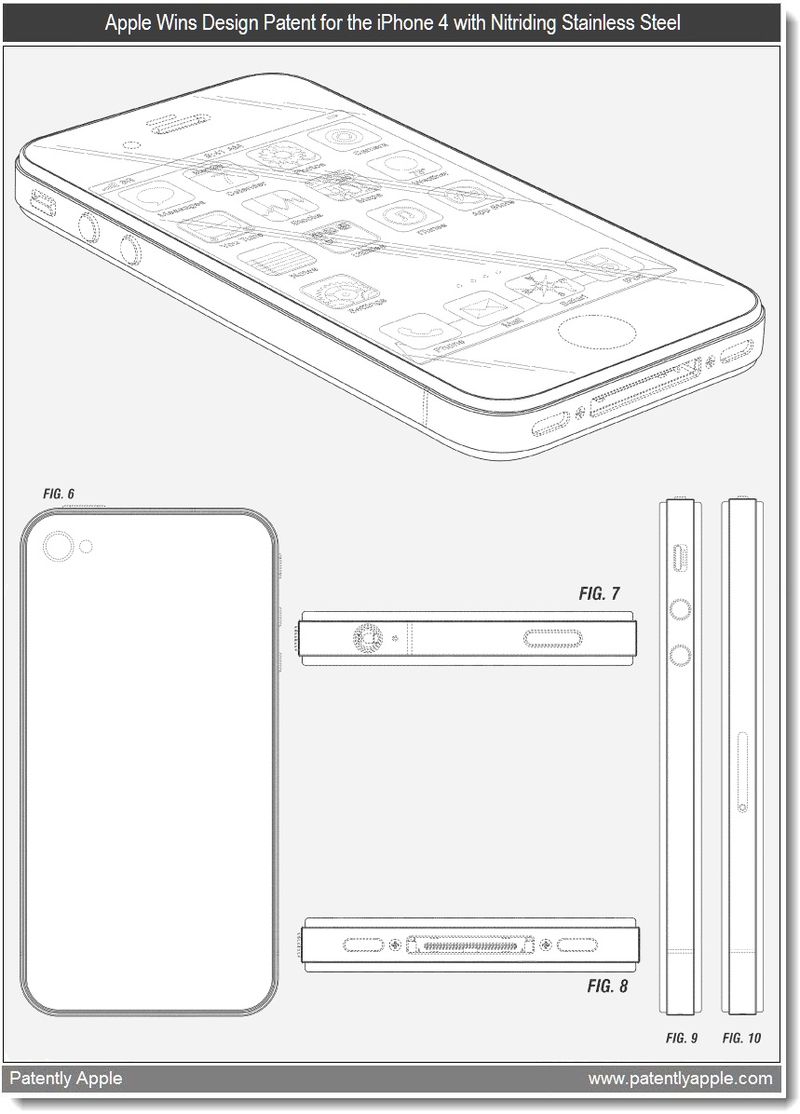 Update: as we could see by yesterday's latest lawsuit filing by Apple against Samsung, Design Patents matter. Apple is suing Samsung on a number of grounds including patent and trademark infringements. A number of Apple's icons being used as exhibits in the case include the following: 1) Phone (2) Settings (3) Photos (4) iTunes (5) Contacts, and (6) Notes. The lawsuit even touches on touch patents like 7,812,828 that we covered in October 2010.

We contacted IP attorney Matthew Macari who commented on this current case in general by stating that "Design patents can be a very powerful litigation tool - the "wiggle room" of interpretation is much greater than many think and can provide a powerful enforcement tool for a Plaintiff in an infringement case." For more specifics about this case, check out both posts on this subject by by Floriian Mueller and Nilay Patel.

Apple wins a design patent for their 2007 iPod touch. Steve Jobs is credited as one of the designers. 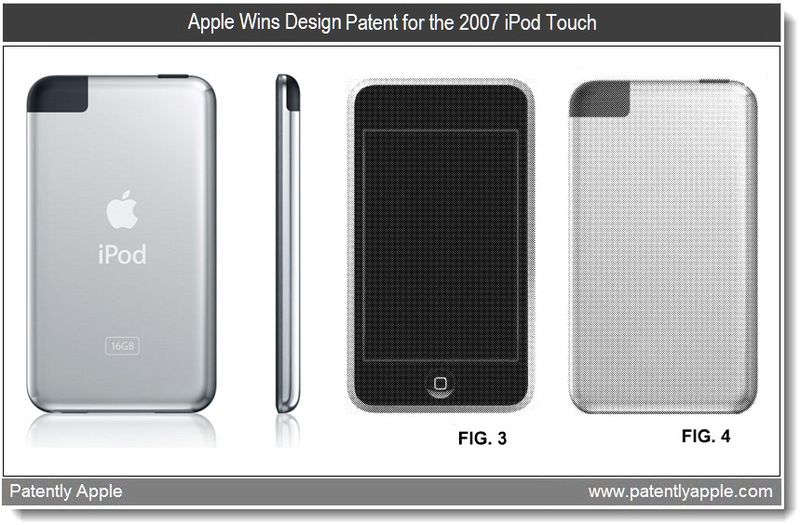