The US Patent and Trademark Office officially published a series of 10 newly granted patents for Apple Inc. today. In our second report of the day we cover a great number of Apple's granted patents including one for Final Cut Pro, a design patent for the App Store's icon imagery, another for an Apple Store related system and a few other minor patents along the way. Yet the surprise of the day certainly goes to a quality testing system designed for high-end LCD displays designed for such systems as a television or an iMac. Apple's display's have been a definite cut above their competitors for some time now and learning about this secret testing equipment easily explains one of the reasons for their ongoing success. Attention to quality detailing is Apple's Hallmark.

Apple has been granted a very interesting patent relating to an LCD quality Testing System devised by one of their Senior Scientists Gabriel Marcu. The testing system was devised to ramp of the quality of Apple's iMac and yes, a televsion. Whether an HDTV ever surfaces is another matter. Apple's displays are generally a cut above their competitors and it's one of the things you always notice at an Apple Store: How potential customers comment on the brilliance of Apple's displays from the MacBook Air through to the iPad. Apple's patent finally gives us a peek into a new system that most of us never even knew existed until now. Below is a brief overview of this new quality display system.

One of the problems associated with the manufacture of LCD displays include manufacturing a number of LCD displays, such as LCD monitors, that have fairly consistent displays in terms of sharpness, contrast, color, and/or other features when viewed at various angles. When manufacturing LCD displays, a number of tests are performed on the various portions of the screen of the display for quality control. Testing instruments are generally oriented at various angles, such as in a perpendicular orientation, and testing is then performed on the LCD screens as part of the manufacturing and testing processes. For example, testing includes measuring various colors on LCD screens according to predetermined standards, such as the ISO 13406 Standard. Often, a perpendicular orientation of the test instrument to the screen of the LCD monitor is used.

The accuracy of the angle in relation to the test instrument and the LCD screen is important to the accuracy of the test performed on the display screen. One of the problems associated with the current methodology is that the test operator generally positions an instrument to the LCD screen utilizing approximations, which may cause delay and inaccurate test results. Additionally, a test angle used to analyze one LCD monitor may vary from the angle used to analyze another LCD monitor, thereby resulting in inconsistent test results of a batch of LCD monitors. Dedicating more time and resources to insure the accuracy of the angle between the test instrument and the LCD screen may cause inefficiencies (e.g., inaccurate testing, repeating screen adjustments, etc.) during the manufacturing and testing of computer displays, such as LCD monitors.

Apple's invention is directed to overcoming, or at least reducing, one or more of the problems set forth above. 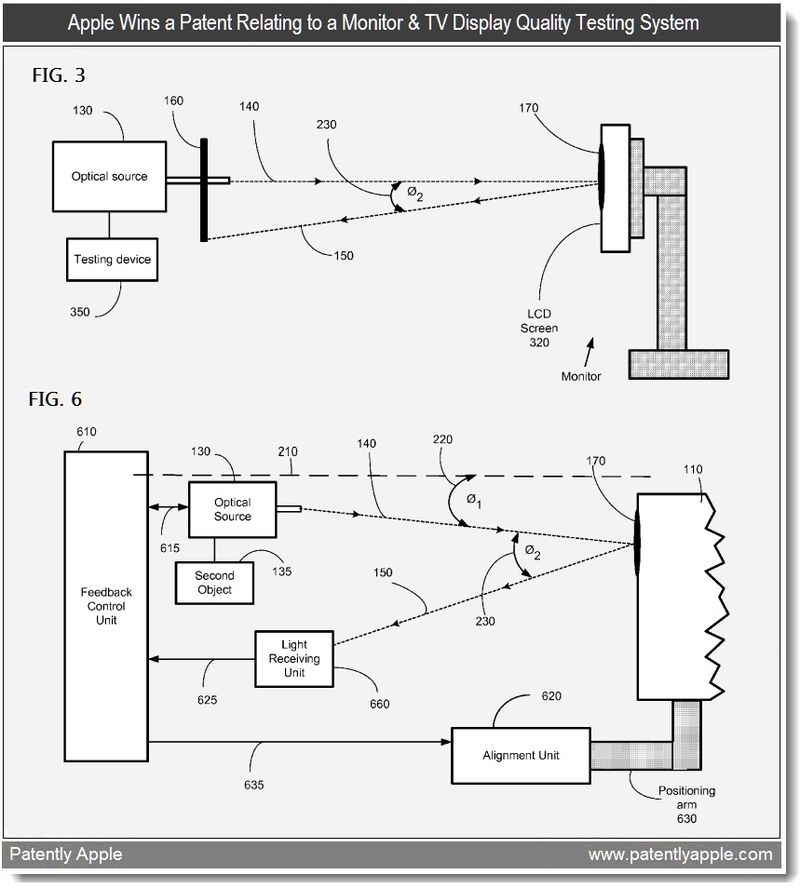 For more information on this testing system, see granted patent 7,933,008.

In the midst of Microsoft's strong objections over Apple's ability to trademark mark the words "App Store," Apple expanded the scope of their proposed trademark in Europe earlier this month. Today, just to rub it in a little further, Apple has been granted a design patent for the App Store in its various states.

While we're on the topic of stores, Apple has been granted another strategic patent win relating to their online Apple Store System. 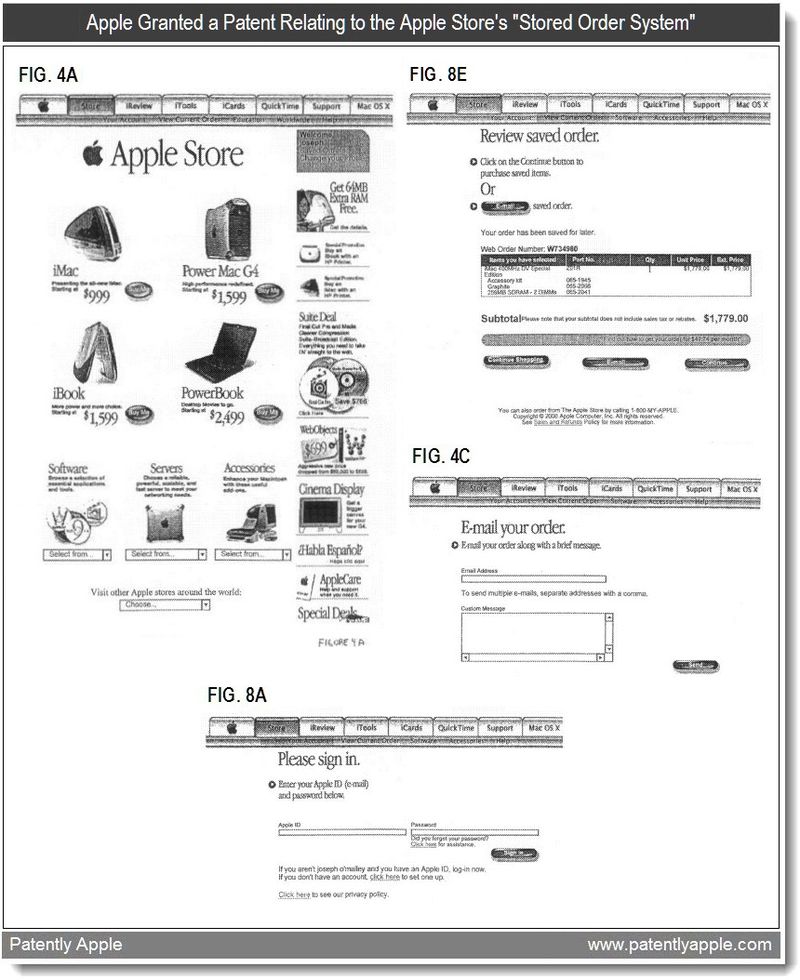 Specifically, the patent details a stored order system which is used along with a shopping cart application. The items of each stored order are saved together, which is an advantage when a main item and accessories are combined in an order. Additionally, a stored order can be E-mailed to another person. The E-mail message allows the recipient to purchase the items of the stored order.

Apple's been granted a patent relating to Final Cut Pro's UI for controlling 3D animation of an object. Various embodiments of Apple's invention cover various aspects of behaviors and working with behaviors. One embodiment covers behaviors themselves, including animations that could be produced by applying a behavior to an item and the algorithms underlying these animations. 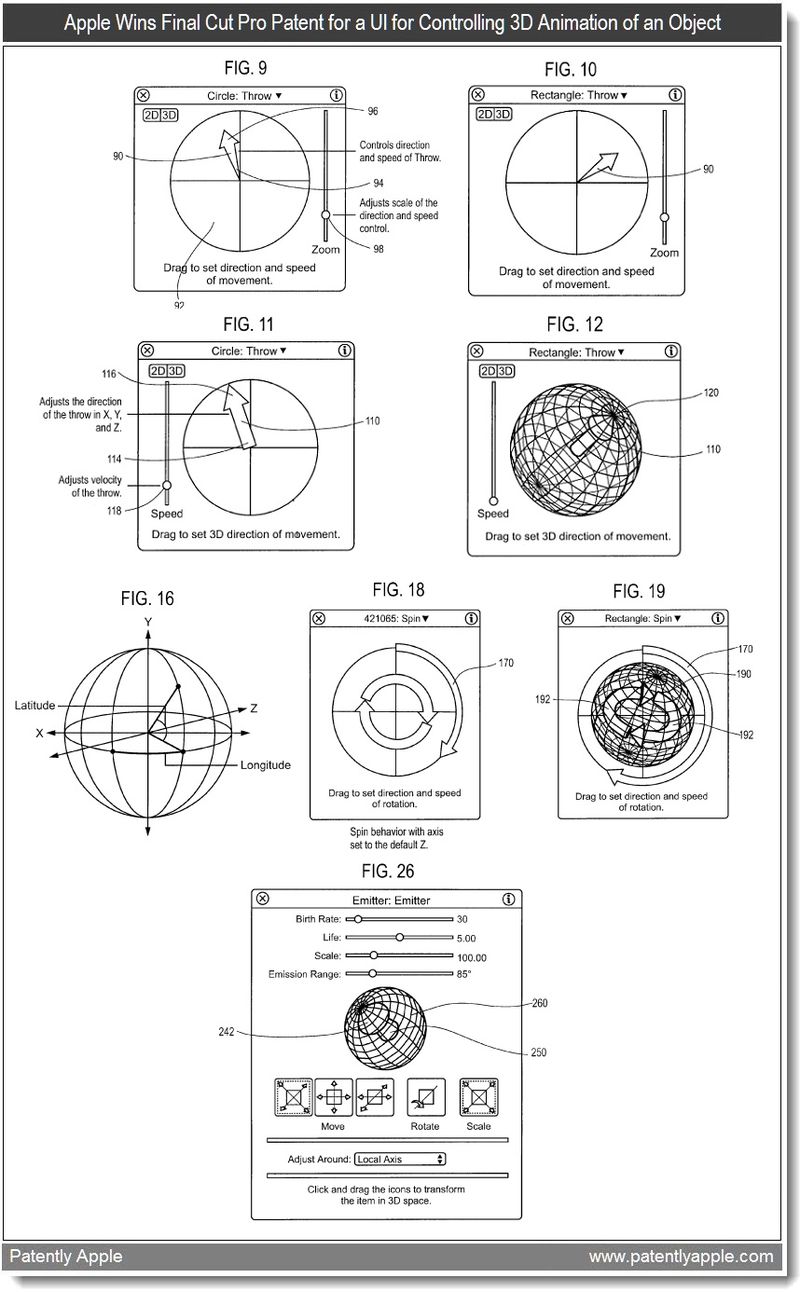 The user-manipulable control element includes a three-dimensional arrow with a straight body, a three-dimensional arrow with a curved body, or a sphere. In one embodiment, the interface includes a virtual trackball that is used to manipulate the user-manipulable control element. Various embodiments presented in the patent are shown above for your convenience.

Apple has been granted a patent relating to the two-piece housing of the iPhone. Apple's patent abstract states that "A first part may be provided with components such as a display, a touch screen, a cover glass, and a frame. A second part may be provided with a plastic housing, circuit boards containing electrical components, and a bezel. Engagement members may be connected to the first and second parts. The engagement members may be formed from metal clips with holes and springs with flexible spring prongs that mate with the holes in the clips. The metal clips may be welded to frame struts on the frame and the springs may be welded to the bezel. During assembly, the first part may be rotated into place within the second part. Retention clips attached to the frame may be used to secure the two parts together. If knowing everything about the construction of the iPhone interests you, then check out granted patent 7,933,123. 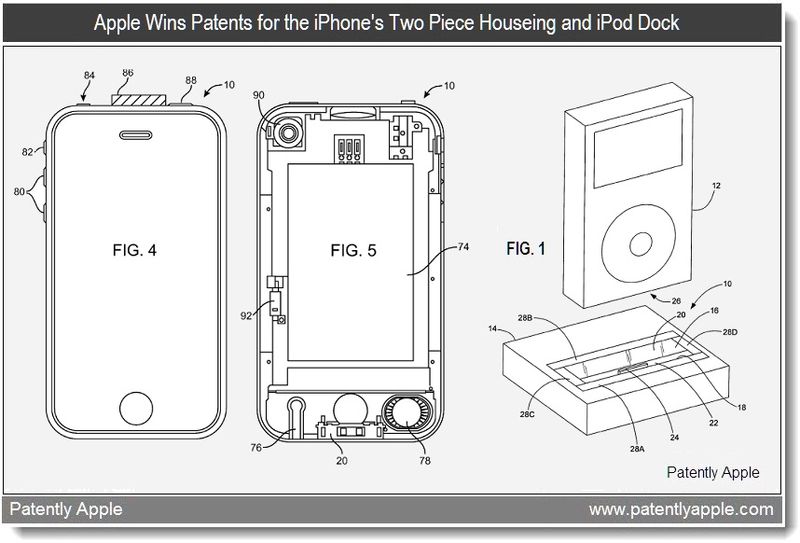 @ Tom. I've never read anything so confusing. keep your comments simple with focused points. You just ramble. I think you're saying a Retina Display would make for a great TV. Well, I'll at least pretend that's what you're saying.

Given that we had the retina display detailed to use for the iPhone (with Apple having to basically write a cheque for the manufacturing R&D/buildings etc to be created to make iPad sized versions - will they do the same? I'm sure you could do a quick check of the normal viewing distance of an ACD/iMac and find the case for a higher DPI for a 27 and above inch screen. A bigger screen means more space to have a slim Mac behind it ala iMac. Would Apple miss the opportunity to make a >27" iMac and just make a >27" ACD/retina display screen (which'd be much higher than "HD" (it'd be 2-4K)).

With thunderbolt you can push the computational power of a Mac from the mac (e.g. a revved up Mac mini/XServe come Mac Pro 1U) to a dumb Thunderbolt ACD updated retina display level screen that's >27". Will be interesting to see where it goes. For things like Lion, iLife, iWork soon, FCP X - the concept of full screen really works with more screen real estate. (and Mission Control) too.