An interesting Apple patent surfaced last month that revealed their use of advanced laser welding methodologies and their contemplation of using another material for the iPad beyond aluminum. Yet hidden within this patent was the revelation that they're seriously considering the addition of a baffle system in future versions of the iPad. As Apple introduces more sophisticated multicore processors, camera optics and sensors into future iPad designs, it only stands to reason that a simple cooling system is in order.

A most intriguing surprise was revealed in a recent Apple patent that points to a possible future version of the iPad employing a proposed baffle system. As you could see below in Apple's patent FIG. 1, there's a clearly identified area noted simply as "Slot opening 116." The slot shaped opening (also referred to as the top vent slot) is formed in the rear panel of the iPad. According to Apple, it's "visible in a rear view of housing 100." 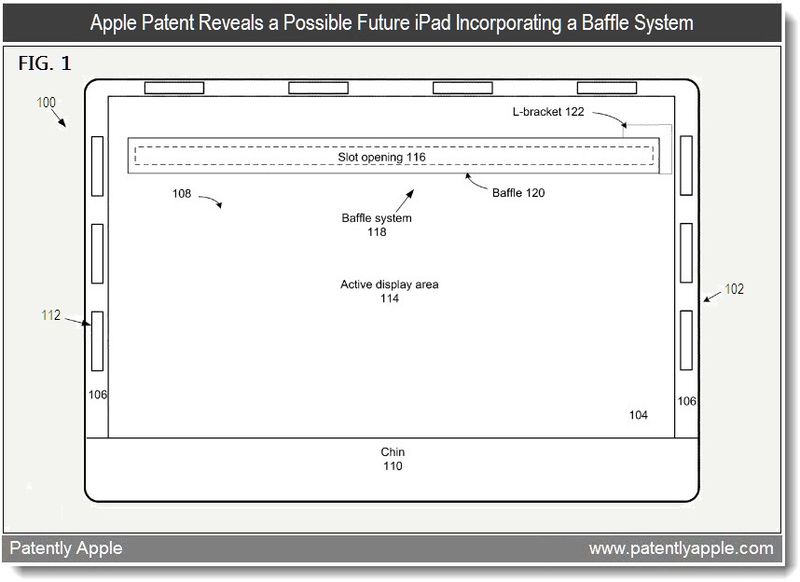 The vent or slot is described as providing a conduit for the exchange of air between the enclosure (104) and the external environment. This exchange of air facilitates the cooling of the computer/display assembly within the enclosure. And in order to prevent a user from actually viewing the iPad's internal assembly and components, Apple's patent describes a baffle system (shown above as point 118) that could be integrated into the iPad's housing. The baffle system could also be configured to direct the airflow that passes through a slot opening (116) from the external environment to specific areas within the iPad's enclosure.

Apple Weighs the Pros and Cons of an iPad Baffle System

Con: In a rare display, Apple is shown to be carefully weighing the pros and cons of incorporating such an air-venting system in an iPad. One drawback to forming a slot opening in rear wall of the iPad, states Apple, is that the removal of material to form slot the opening could result in a localized area of a reduced structural integrity simply due to the fact that a void has been opened in an otherwise continuous rear wall. This void could result in mechanical deformation of the rear wall in proximity to the slot opening. Slot misalignment could result when a force applied to housing causes one side of the slot opening to displace relative to the other side of the slot opening, resulting in an a form of underbite. In addition to detracting from the overall appearance of the iPad's housing, such mechanical deformation of the rear wall could seriously affect dimensional and structural integrity of the iPad's housing.

Pro: On the pro side of the ledger, the baffle system could essentially eliminate any stress related mechanical deformations of the rear wall in the vicinity of the slot by deflecting any force applied to the iPad's housing and effectively bypassing the slot opening. For example, if a force would be applied to a lower portion of the iPad's housing, the force would be transmitted through the rear wall to and through the baffle to L bracket 122 and ultimately to that portion of the iPad's housing joined to L bracket 122 bypassing slot opening 116. In this way, the slot opening could be formed prior to operations that require that a restraining force be applied to the housing. Such operations could include, for example, laser welding and CNC machining. In this way, substantial savings in both fabrication time and expense could be realized since the slot opening could be formed in the same set up as the fabrication of the rear wall.

Yet considering that Apple already employs a baffle system on their current iMac (as we presented to you in our cover graphic), the argument shown in Apple's patent appears to merely be an engineering exercise for justifying this aspect of the inventon.

More importantly, it's pretty safe to assume that we're likely to see the iPad increase their multicore offerings in the future to include 4, 8 or even more ARM processors to power ever better gaming graphics, advanced camera optics and sensors. With that kind of power in play, potential heat problems could give users real headache and hit on performance. That's not exactly what we want from a killer gaming or productivity tool. In that light, the baffle system presented in Apple's patent seems like a winning solution to head off heat related problems.

Beyond the proposed iPad Baffle System, the heart of Apple's patent generally related to detailing their methods of utilizing advanced welding in the manufacture of the iPad so that it's aesthetically pleasing while being impeccably durable. Apple patent describes that there could be at least two types of lasers that could be utilized. The first method uses gas, such as CO.sub.2 while the second method uses solid state lasers. Both methods could operate in the infrared region of the electromagnetic radiation spectrum that is invisible to the human eye.

The solid state laser could include lasers having a gain medium formed of glass doped with optically active ions such as neodymium (Nd) or ytterbium (Yb) that could provide its primary light output in the near-infrared at a wavelength of 1.06 microns at laser energies up to about 8000 watts. Solid-state lasers are generally more precise due to higher quality optics and are more versatile due to beam delivery than gas lasers. 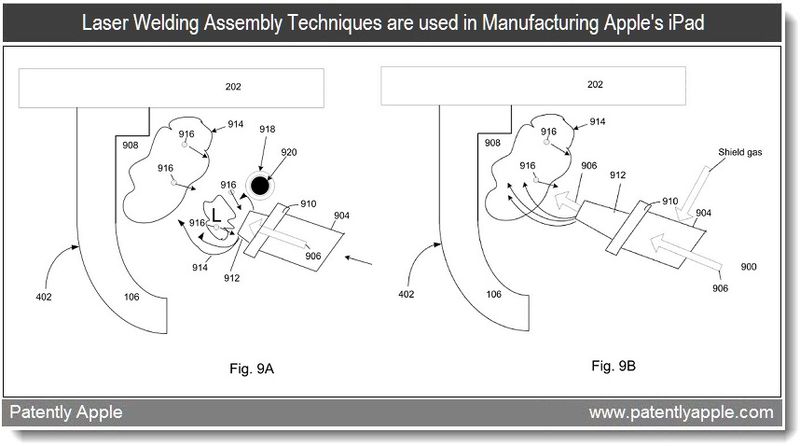 The iPad's Housing: Aluminum or Plastic

And lastly, if should be noted that Apple's patent states that "the rear wall could be formed of rugged material such as plastic or metal such as aluminum…" As the competition heats up for tablets in the coming months and years, adding an entry level iPad constructed with the same rugged polycarbonate as is used in Apple's market entry MacBook is a serious possibility.

Though on this front, you should be reminded that Apple has been researching even lighter materials than plastic for entry level iPads which include advanced laminate composites and /or fibers. You could read about those materials in out December 2010 report and in fact while you're there, you should check the graphic at the bottom of that report. There are two images that appear to be prototypes of an iPad-like device made of a very shiny white material. Whether we ever see alternate material emerge is unknown at this time, but the baffle system sure sounds like a winner. Time will tell.

Apple credits Carlo Catalano, Derrick Jue, Brian Miehm of California and Takahiro Oshima and Masashige Tatebe of Japan as the inventors of this March 2011 patent application which was originally filed in Q3 2009.

Update: It should be noted that the patent points to handheld devices in relation to this device. Secondly, the patent refers to patent point #112 as being "protective glass restraints structures attached to the metal frame" of the device. In context, a new iMac patent that we'll be reviewing this week clearly shows that the iMac uses magnets in the very same area as noted in the iPad design above which uses glass restraints. It's a fine distinction that has to be noted, though the iMac patent clearly shows the iMac's physcial design to distinguish it between the two devices.

The slot does not have to be a contiguous 'hole'. Just as rounded corners reduce stress, placing a bunch of smaller holes reduces potential stress points as well as maintains strength. And a whole bunch of circular holes is even stronger: trading maximum airflow volume for a very limited loss in rigidity. Have a look at the front of a Mac Pro.

Apple could always use Liquidmetal and then the case would maintain it's structural rigidity.