The Problems to Overcome

Apple's invention is to allow light display systems, such as projectors, to have lower power consumption, reduced speckling, and/or be less expensive than conventional light projectors.

A Home Theatre System: The first projector system that Apple is working on is shown in patent FIG. 1. It's projector that you see in rare TV – Home Theater systems that are secured to a home or business ceiling. Apple has been secretely working on both 3D holographic and stereoscopic projection systems for years. So they're not starting from scratch here – they're just exploring varying new ways to bring their projection technology to market.

In respect to their projection system being used in business, Apple has already provided us with a peek of that project. A year ago we covered this topic in our report titled "Apple Files a Mysterious Projector Patent." It should also be noted that Apple's patent points to an alternative table top projection system though didn't provide an illustration of such. But if you're in business, then you know what they're referring to.

The MacBook & iOS Portables: The second projection system that Apple is working on is shown in patent FIG. 2 below. Clearly Apple is targeting a projection system to be specifically integrated into future MacBooks. Since the projector is capable of providing a combined beam at reduced power levels as compared to conventional coherent beam systems, such an embodiment may be desirable in a laptop computer being battery powered. According to Apple's patent, the projection system could also be incorporated into future iOS devices such as the iPhone. Of course they simply refer to portable handhelds like a phone which translates accordingly.

On this front, Apple has shown us some of their handiwork in progress back in April 2010. In respect to other handhelds, Apple hinted of incorporating a projector into a future iPhone and how it could be used to share memories.

A Rear Projection TV: The third projection system that Apple is working on involves a rear projection TV as shown in patent FIG. 3. 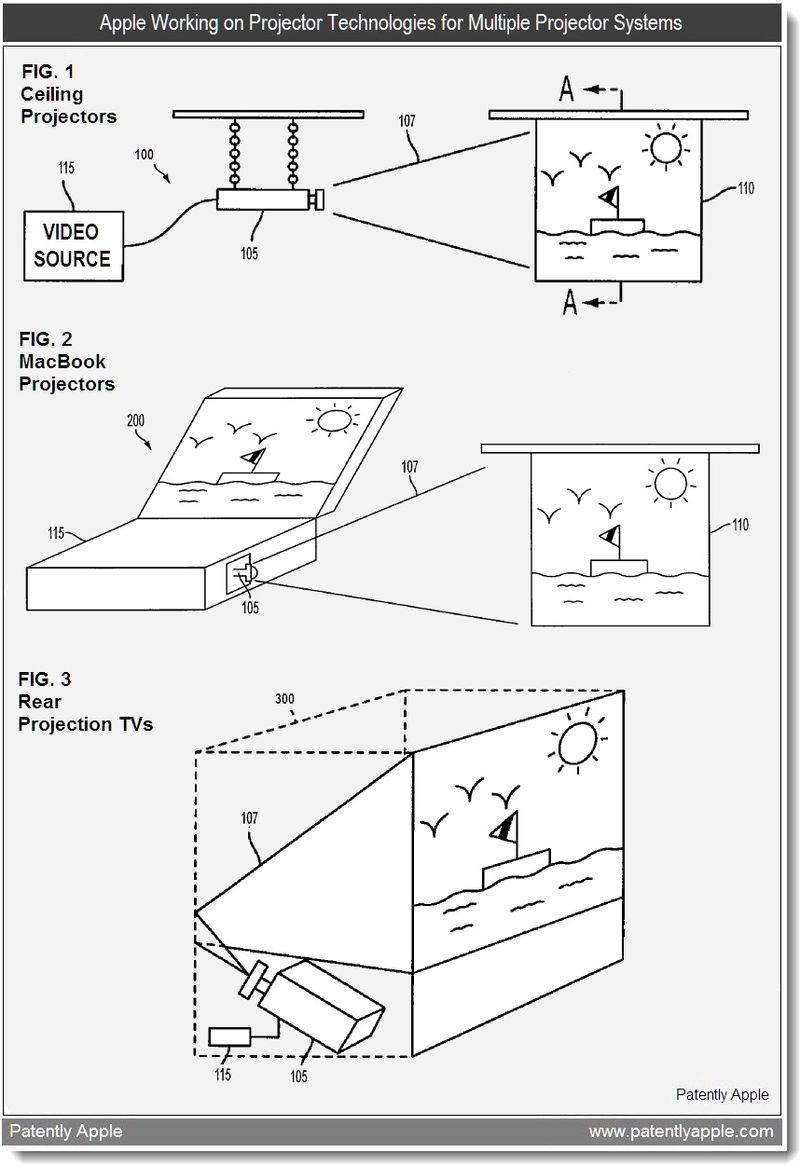 In recognition of Apple's ongoing work in this area, Patently Apple has opened a new Archive section to follow this trend under: Patents: Projection.

For more information on these projection systems, simply feed patent application 20110075055 into this search engine. Apple credits Bret Bilbrey as the sole inventor of this patent which was originally filed in Q3 2009.

On most electronic devices today, the conductive pads of an audio jack could typically be formed from stamped sheet metal shaped to ensure electrical contact and retention when a plug is inserted in the jack. For example, a commonly used shape for conductive pads of a jack includes, for example, cantilever beams extending into a cavity of the jack and operative to deflect away from a plug when the plug is inserted in the jack cavity. Additionally, cantilever beams could take up large amounts of space within the jack assembly.

Obviously Apple has something in mind with this patent, being that they're virtually reinventing the audio Jack assemblies with cylindrical contacts. This patent follows two other patents focused on the reinvention of miniature Jacks. The first was covered in our report titled "Apple Reveals Technology Required for Future Miniature Products" and the second was covered in our report titled " Apple Seeks to Perfect the Audio Jack for Nano Devices."

Considering that Apple hired a new Senior Prototype Engineer by the name of Richard DeVaul to work on wearable computers about a year ago, this push into experimenting and researching new ways of designing miniature Audio Jack Assemblies becomes par for the courses. It also means that Apple has a master plan to push into new mobile device territory if they wish to remain the leading mobile devices company in the world – according to CEO Steve Jobs.

In this patent, Apple presents us with the widest list of miniatures and mobile devices as possible so as to blur the picture so to any specific. Yet, hidden in this list is likely a few next generation devices that they may be working on. The list includes the following: 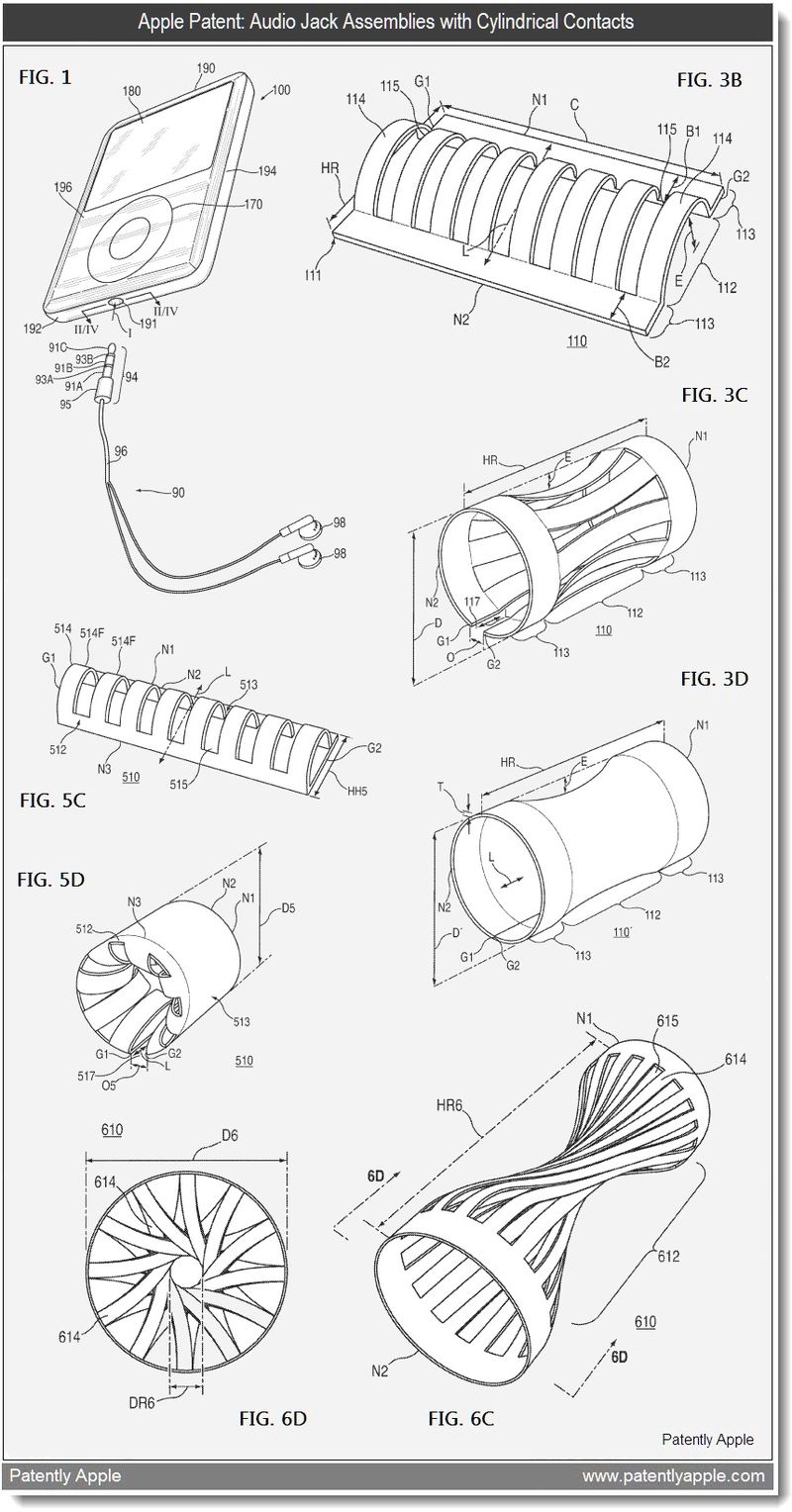 Apple's patent is mind-bendingly complex for what appears to be a simple component. Yet the patent illustrations above show us how detailed Apple's invention really is and may very well reveal just how close they are to implementing this idea – if they haven't done so already.

Only those in this field would love a stroll through this technical garden. But if you're brave or happen to be in this field, then by all means check out patent application 20110076896 and use the illustrations above to help you visualize what the patent is describing.

Apple credits Eric Jol as the sole inventor of this patent application which was originally filed in Q3 2009.

Later today we may list other patent applications here that were published yesterday.