In respect to new Apple patents, it was a very interesting patent day yesterday indeed. The day began with learning about Apple's latest research into a new peer-to-peer technology followed by a new compass bearing feature for future iPhone cameras. If that wasn't enough, we discovered a huge batch of new patent applications dealing with Apple's obsession over advancing backlit LED Display brilliance. The new display technology would be able to deliver superior FaceTime conferencing experiences as well as delivering crystal clear viewing photos, videos, 3D imaging and perhaps Television too. Now that would be the most brilliant benefit of all.

An Overview of the Problem of Chromaticity Variations

While LEDs retain several advantages over past technologies such as cold cathode fluorescent lamps (CCFLs), due to the manner in which certain LEDs are fabricated, particularly phosphor-coated LEDs, chromaticity variations may be present in the light emitted from an LED over a range of angles (e.g., a "viewing angle") relative to an optical axis. In certain backlight units, such as edge-lit backlight units, these variations in chromaticity may negatively affect the color uniformity of the light emitted from a light guide of the backlight unit, such as by causing a color shift along an axis of the backlight unit.

As such, it may be beneficial to provide a technique for reducing color shift caused by chromaticity variations of LED lighting, thereby improving color uniformity in LCD displays that utilize LEDs as a light source.

Overview of a Backlit LED Display

Following along in Apple's patent FIG. 4 representing an example of an LCD display (noted collectively as patent point 34) – we see that it includes an LCD panel (46) and a backlight unit (48) which may be assembled within a frame or enclosure (50). 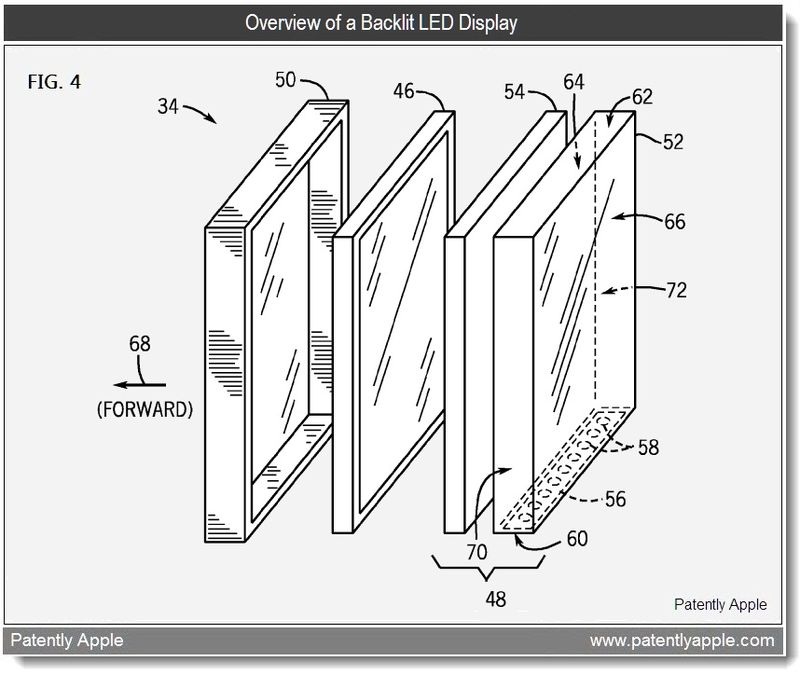 The All Important Light Guide

Throughout Apple's patent claims, the "light guide" is one of the key attributes of Apple's backlighting system and therefore deserves a little more attention to its detailing.

A Light or Air Guide

Light from the light source generally propagates through the light guide towards an opposite lateral edge via total internal reflection at forward (64) and rear surfaces (66) of the light guide and may ultimately be emitted therefrom towards the optical film(s) and LCD panel.

Due to the nature in which certain LEDs are fabricated, chromaticity variations may exist in the light emitted therefrom. Accordingly, patent FIGS. 5, 8, and 9 shown below are provided herein to more clearly illustrate how such chromaticity variations may result in an undesirable color shift being present along an axis of a backlight unit – along with Apple's solution (in FIG. 10). 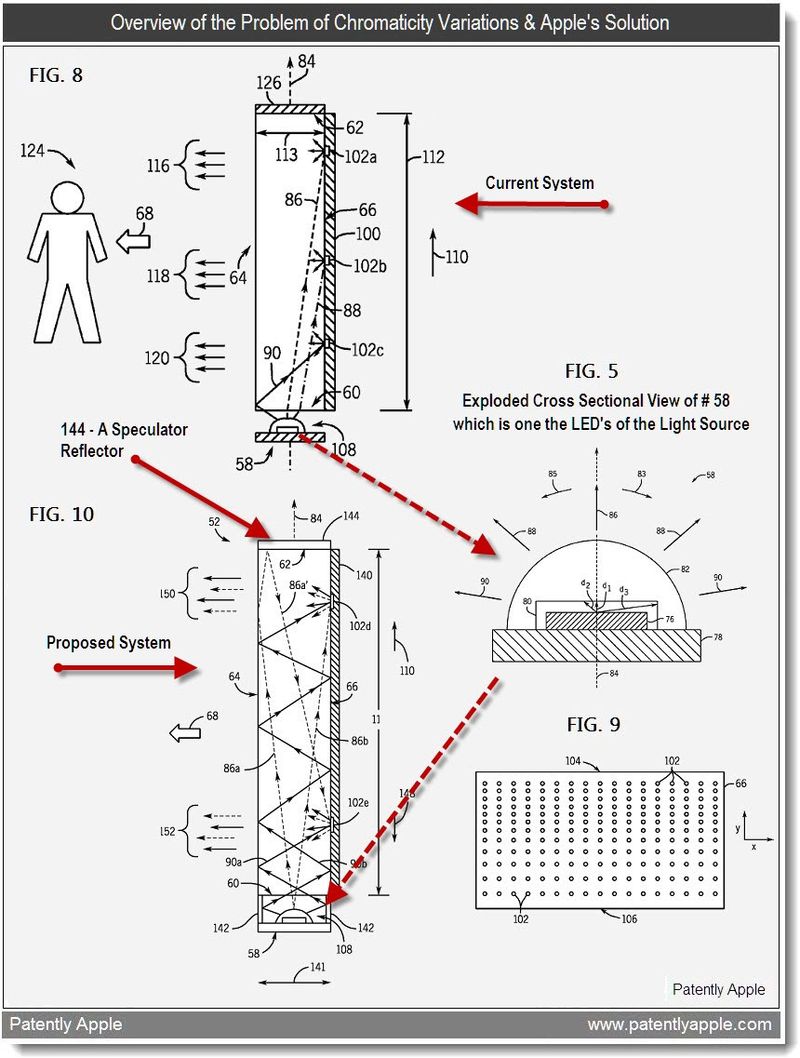 As you could clearly see by comparing Apple's patent FIG. 8 to FIG. 10 that Apple's proposed solution will be able to add a lot more light to the display by adding a unique "Speculator Reflector" as indicated in FIG. 10. The additional light captured in the backlight unit should nullify Chromaticity Variations.

Apple credits their Sr. Optical Display Engineer Chenhua You and Shengminas Wang as the inventors of patent application 20110090142. Believe it or not, the patent was only filed on February 22, 2010 or two months ago.

So Why Does this Matter?

So why does it matter if Apple improves on their already superior backlit LED Displays? Because Apple is spending a lot of research dollars on advancing the camera technology that is going into both iOS and OS X hardware. The cameras in turn support Apple' strategically important applications such as FaceTime, iPhoto, Aperture, iMovie, and Final Cut.

And let's not kid ourselves here: Apple is eyeing the television market. There are a number of patents to support this position and the noted patent above reminds us of this fact once again ever so subtly. In Apple's patent-point number 004 Apple states that LED's are for use in "a wide variety of electronic devices, including such consumer electronics as televisions, computers, and handheld devices…" So while an Apple branded television may be a little down the road, to be sure, the fact remains that Apple keeps on improving their own display technologies to outshine the competition on multiple fronts for current and future applications.

In Apple's '303 patent, they even described a set of one or more warp parameters that would mathematically represent a transformation of an image from the perspective at which it was captured to a target perspective. They clarify that as meaning transforming "an image with respect to one, two, or three dimensions." The topic of 3D imaging is one that Apple has discussed in serveral patents over the last few years covering everything from avatars to personalized shopping avatars to coming 3D internet experiences to next generation interfaces and even OS X in 3D. Is that reason enough to want even brighter and sharper displays?

While OLED based displays are likely to play some future role in Apple's iMac or Cinema Display lineups – in the shorter term, advancing backlit LED displays is likely the way that Apple will go.

Just when we thought it was impossible for computer displays to get any brighter, the Crazy Ones in Cupertino have once again turned it up a notch. Yes, that's brilliant in more ways than one. 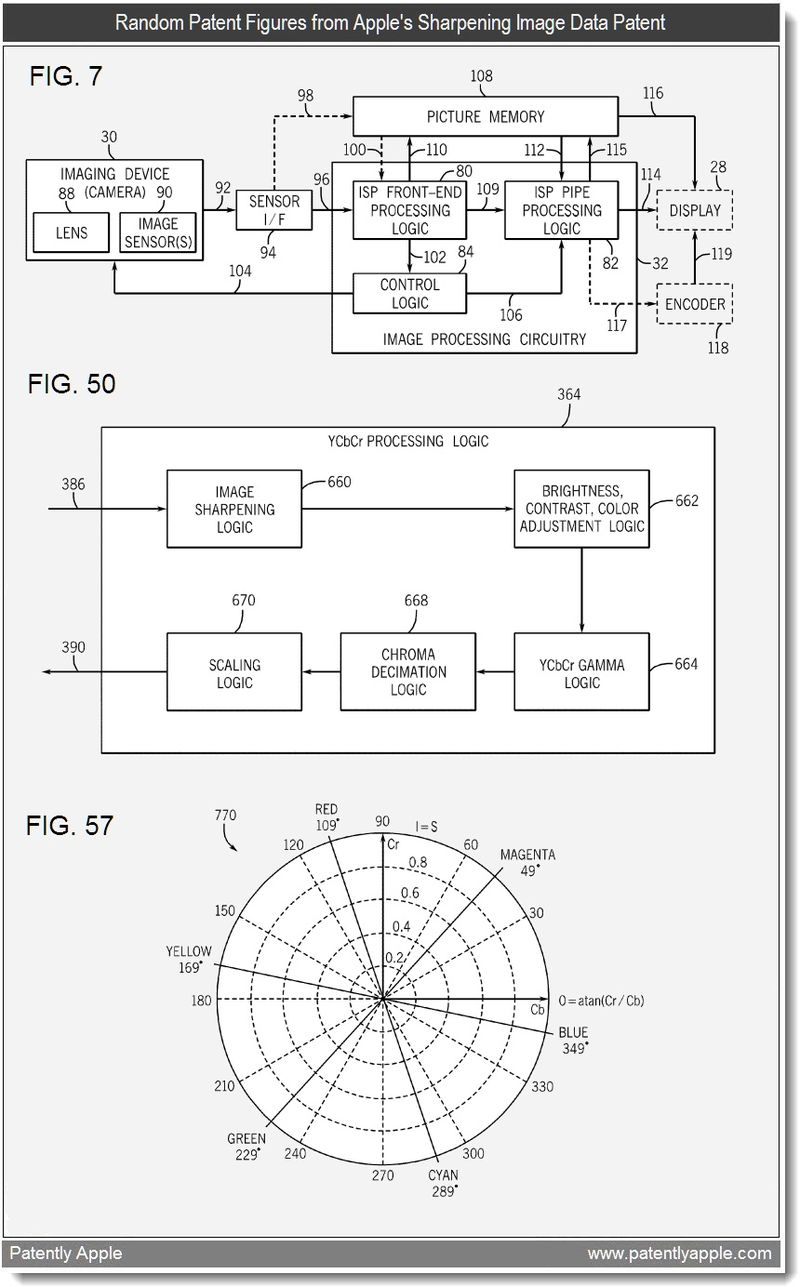