Apple Abandons their Efforts to Secure the "POD" Trademark

This morning, the Canadian Intellectual Property Office published Apple's official notice of abandonment of the "POD" trademark. After seven long years of attempting to appease the authorities with several changes, Apple has decided to drop the trademark. This now opens the door wide open for the cloners.

Apple Gives up the Ghost for POD

After a long seven year legal battle to secure the trademark "POD," Apple has finally given up the ghost and officially notified the appropriate authorities of their intentions to abandon POD. The Canadian IP Office notes that the trademark was abandoned on April 13, 2011. The records noted below illustrate how Apple attempted to appease the concerns expressed by the Trademark Office, but to no avail. 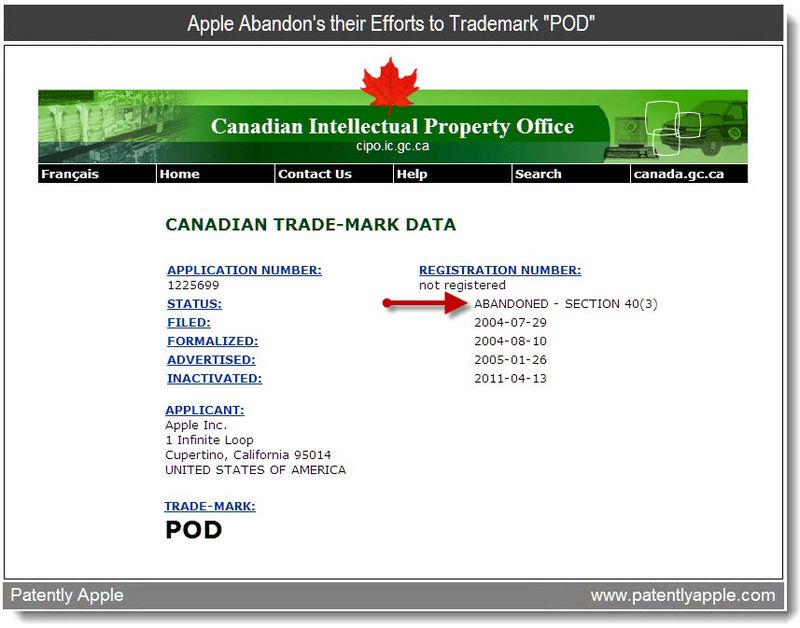 It should be noted that Apple's abandonment of "POD" has no bearing on their "iPod" trademark. However, Apple's ability to legally fend off competitors from using "Pod" in their branding is now lost. So any competitor who wishes to brand a device with the word "Pod" is able to do so without any legal ramifications from Apple. That should make copycats like Samsung, very happy indeed. Will someone try to introduce something like an "ePod" device in the future? – Yes, more than likely.

Note: In case you missed the original news on Apple's "Startup" trademark, check out our April 20th report.

@ Judhe. It's my opinion that if Apple has officially abandoned "POD" in Canada it's because they've abandoned it across the board. It may take time to appear in various Trademark Offices around the world, but it's likely toast, Judhe.

But just in Canada right? That might be a lot of effort for a declining market only in Canada, right?