Why is Apple Trademarking Thunderbolt?

On March 09, 2011, the Canadian Intellectual Property Office published a very odd entry. According to this Office, Apple has applied for the "Thunderbolt" trademark under application 1516633. The question is why?

The morning that Apple introduced Thunderbolt with their new MacBook Pro line-up, we added a small news entry to our current report-of-the-day covering Apple's "Places" trademark filing. We stated at the time that "Intel was equally quick to clarify that they had developed the technology and was brought to market with technical collaboration from Apple. So the myth that Light Peak was originally developed by Apple was quickly put to rest."

Okay, if it's Intel's technology and Apple played some minor role as a technical collaborator, then why is it that Apple is applying for the Thunderbolt trademark? What am I missing here?

Until Apple or Intel decide to clarify this matter, we have to go with the facts. And right now it looks like it is Apple who will own the Thunderbolt trademark. The questions remaining are: will this force other OEM's to dub their new high speed I/O something else? Better yet, was Apple's contribution to Thunderbolt a little more substantial than Intel was and/or is willing to publicly admit to? 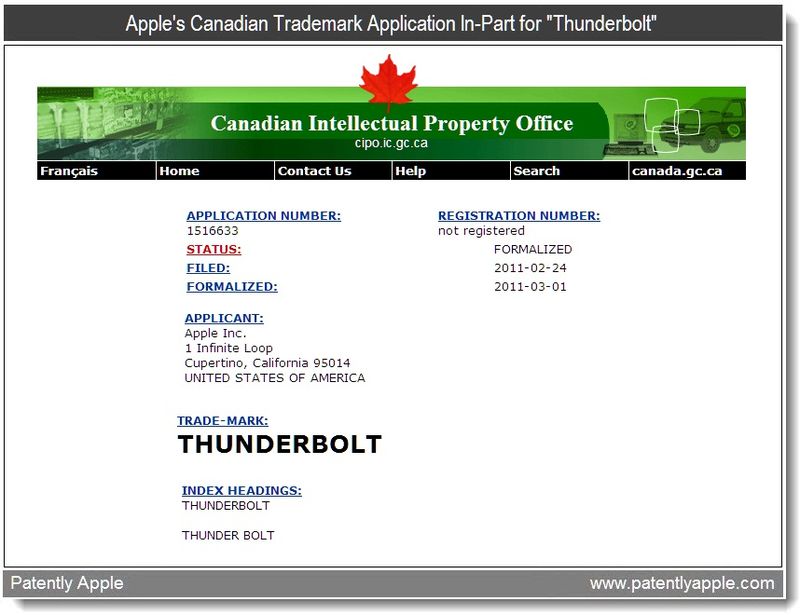 The question of the day: Do you think there could be a legal battle over the Thunderbolt trademark?

Update, 5:30 PM MST: At the bottom of the Intel webpage regarding Thunderbolt, Intel claims that Thunderbolt is their trademark.

One of our visitors from France, by the name of Cedric Ingrand made this point that is more than valid. You could check out the Canadian trademark application information here to verify Apple's information. Interestingly, a quick check at the USPTO for Intel Corporation, didn't yield any finding for "Thunderbolt." Furthermore, working backwards, searching for "Thunderbolt" we found a number of owners in the US, but Intel wasn't amongst them. Hmm, it appears that there may be a little lightning to go along with that thunderbolt afterall. Only time will tell what, if anything, this actually means.

Update 3 May 20, 2011: The answer to our report's question finally came through: Intel finally clarified their apparent trademark clash with Apple. Dave Salvator, Senior Communications Manager at Intel explained the trademark history with Bright Side of News (BSN) by stating the following: "As part of our collaboration with Apple, they did some of the initial trademark filings. Intel has full rights to the Thunderbolt trademark now and into the future..." I would have preferred to read that Apple made that statement, but it appears that Apple is transferring their applications to Intel, according to BSN. Time will tell if all goes well on that front.

Thunderbolt and LightPeak are the same thing. Both use the same tech and both can use either optical or copper cabling. Both the optical and electrical cables use the same connector (the type as used on the new MacBooks) - the port provides power to the optical transceivers moulded into the cable ends and mated with optical fibre.

Hope this helps clear up any confusion!

@MacPredictions: The FireWire trademark is free (as in beer) for anyone to use, unlike "Made for iPod" (which requires royalties) or AirPort (which is not licensed out as far as I can tell). Like many trademarks, the protection is typically used to prevent graphical tampering and to ensure compliance with the standard: for instance, CDs with proprietary copy protection could not legally carry the CD-ROM mark.

In the case of FireWire, tons of peripheral manufacturers happily used the trademark under free license (I think they still do). Later, the 1394 Trade Association adopted FireWire as the preferred marketing name, gaining the right to sublicense the mark to third parties. There is really no reasonable sense in which Apple tried to stop other parties from using it, and likely Apple would like Thunderbolt spread just as widely.

Sony probably had their own reasons for calling it i.Link. They started using FireWire quite early, maybe before the name caught on. Or they wanted to distinguish their 4-pin port (which doesn't carry power) from the more typical 6-pin notched rectangular port. Or they were just embarrassed to use a competitor's brand. Many PC-biased techheads simply refused to adopt an Apple term, preferring to stick with the awkward IEEE1394; yet rarely would one call a serial port by its technical name RS232 or a parallel port by IEEE1284.

Now if only Apple could figure a way to recharge their iOS devices lightning quick or make their wireless keyboard stay charged for more than 8-10 days at a time. Arrr

Maybe the copper version is called Thunderbolt and the fiber optical version, if it ever comes, will be called Lightingbolt. Apple gets the Trademark for Thunderbolt for its contributions and Intel will get the next one.

Apple had a secret I/O technology in the 90's called Quick Ring. They never did anything with it because they were in trouble at the time. Apple needs a faster I/O for more than we know today. Intel was the only way to get the technology they want at the price they want. So who cares that they gave it to Intel. But i like the fact that Apple is getting to wink and say, you see it's ours.

@ Steve W. Intel didn't spill all of the beans about light peak. So I'm not too sure that copper wasn't always apart of the roadmap to begin with. Intel is more sensitive to backward compatibility than Apple is. Simply history proves that out.

You can look at the iPad's first year sales and see that Apple has successfully managed to convince millions of otherwise ordinary consumers to become early tablet adopters - by making the iPad backwards compatible with the iPod Touch. Apple has taken that "lesson learned" and applied it to Lightpeak.

@ John. Apple differentiating their brand as Thunderbolt is understood. But when it launched, Intel was calling it Thunderbolt. That's the friggin point. The fact that Intel has adopted Apple's trademark or branding of this technology. Nice little win for Apple.

@ Joseph. I get what you're saying, and the patent is the important factor here. Yet Apple is getting something like a 6-9 month exclusive run with Thunderbolt and the official trademark. These are signs proving that Apple was likely more than just a technical collaborator.

You're getting excited over nothing. Apple could simply be using the name Thunderbolt in describing their (licensed) implementation of the technology on their products. Sure, they may have had some roll in developing the technology, and most likely did, but even if they didn't, as a company, you don't want copy-cats using the name Thunderbolt on their own products. When you have an exceedingly successful line-up of products as Apple does, you do what's necessary to differentiate yourself from the others.

@ Joseph. We get that it could be a collaborative project. The point is that the trademark, which is likely to be Apple's is being used by Intel. That's the point. Apple is getting a huge credit here. Do you think it's just because they're nice guys, or that Apple contributed to the technology? If we ever get to see the patent, that will be the second shoe to drop.

A trademark is just a name. It doesn't necessarily have anything to do with Apple's contribution to the underlying technology. For that you need to check the patents - are they owned by Apple, Intel, or both?

Assuming it's entirely Intel's technology, thunderbolt could be Apple's trademark for the name of a very fast port/cable on Apple's computers. Other would be prevented from using the same name, not the technology itself.

You guys are confusing trademarks with patents. Apple can trademark a name for a fast port/cable with absolutely no connection to the underlying technology or who developed it.

Interesting. Okay, I'm laughing. Someone has egg on their face this morning. Guess who?

Hey NYC Connie, Apple to Intel. It's our technology, bitch, and don't you ever forget it.

If I was Michael Dell, I'd be on the phone to Otellini right about now asking them WTF just happened. It's bad enough that they have to turn their hardware developement on its head to compete with tablets. Now they have to suck it up and adopt Apple's trademarked Thunderbolt by brand. Oy.

I'm sure the folks who developed USB 3.0 are thrilled to know that Intel favored Apple's thunderbolt and left them at the back of the line waiting for Intel's support. So much for Intel loyalty.

@ MacPredictions. The point is that Intel is using Apple's trademark. That's the point. Intel is calling it Thunderbolt and it's not their trademark. You missed the point.

It's not that strange. Apple frequently used their own propriety name for an industry standard. For example, AirPort for WiFi, or FireWire for IEE1394 (admittedly the latter was their technology, but the principle still applies, since they didn't let other parties use the name).