Patent Shows that Apple is Bringing "Spaces" to the iPad 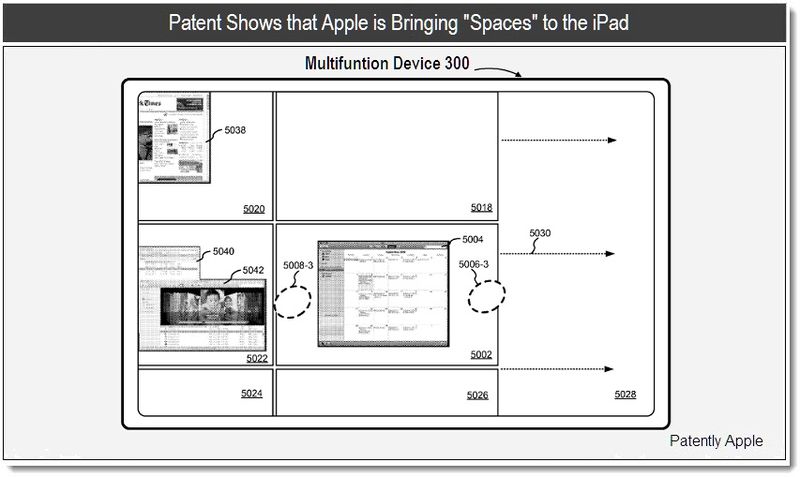 In an Apple Discussions forum on Spaces for iPad, Robb Manning stating back in 2010 that having "the ability to touch one button and switch spaces to where I have safari up to do some research would be awesome." Well, today we move closer to that reality. The USPTO has revealed a patent that shows that Apple is bringing Spaces to the iPad. In fact, if you look closely in one patent graphic, you may actually be getting a sneak peek of OS X Lion on iPad. This spices things up a bit wouldn't you agree?

Apple's Solution: Bring Spaces to the iPad and other Touch Devices

In some embodiments, the user interacts with the GUI primarily through finger contacts and gestures on the touch-sensitive surface. In some embodiments, in addition to manipulating workspace views, the functions include one or more of: image editing, drawing, presenting, word processing, website creating, disk authoring, spreadsheet making, game playing, telephoning, video conferencing, e-mailing, instant messaging, workout support, digital photographing, digital videoing, web browsing, digital music playing and/or digital video playing. Executable instructions for performing these functions may be included in a computer readable storage medium or other computer program product configured for execution by one or more processors. 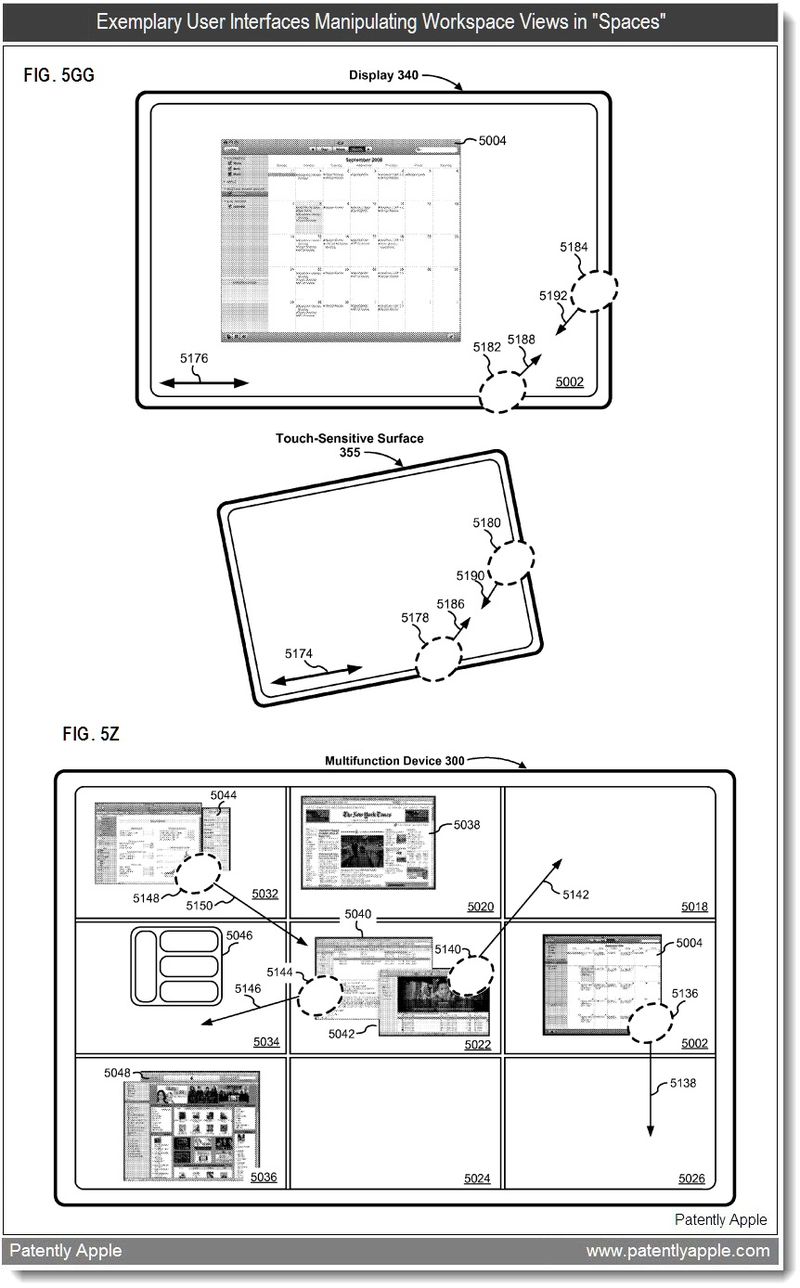 Apple's patent FIG. 5GG illustrates the device detecting a two-finger pinching gesture at a location on a touch-sensitive surface that corresponds to a corner of the display, where the touch-sensitive surface is distinct from the display. Patent FIGS. 5Z illustrates moving windows between a plurality of workspace views while concurrently displaying the plurality of workspace views. 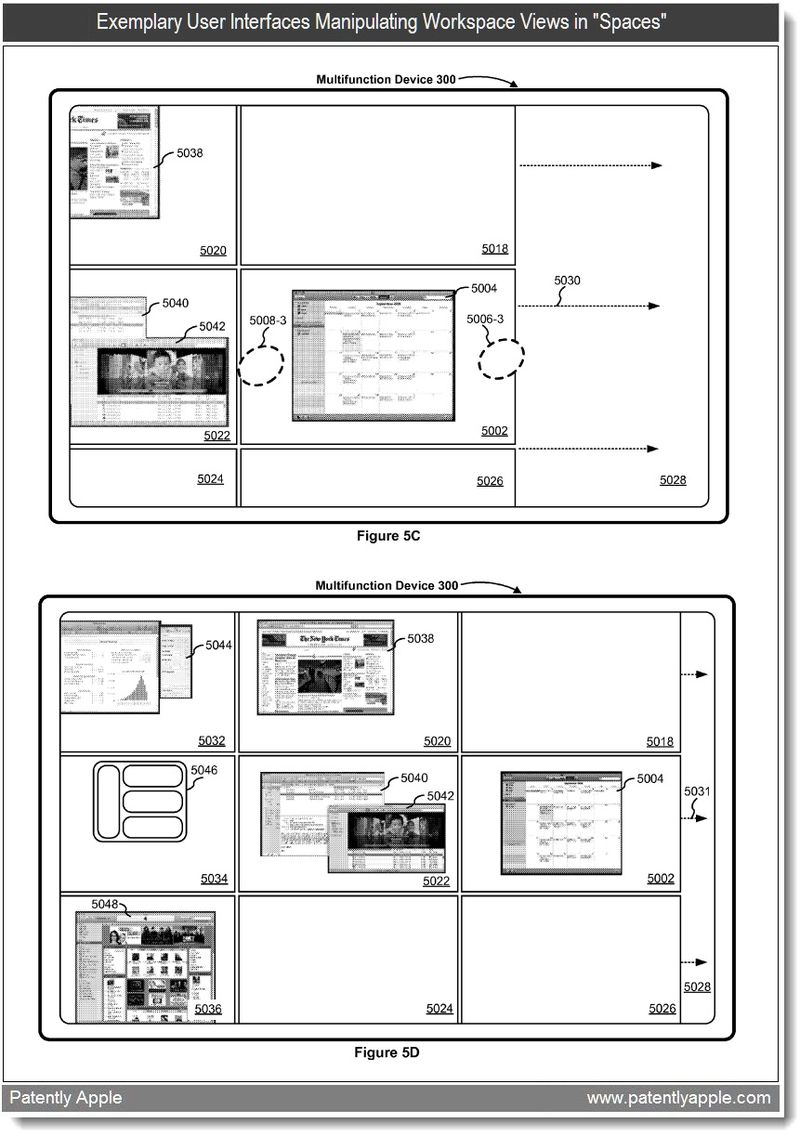 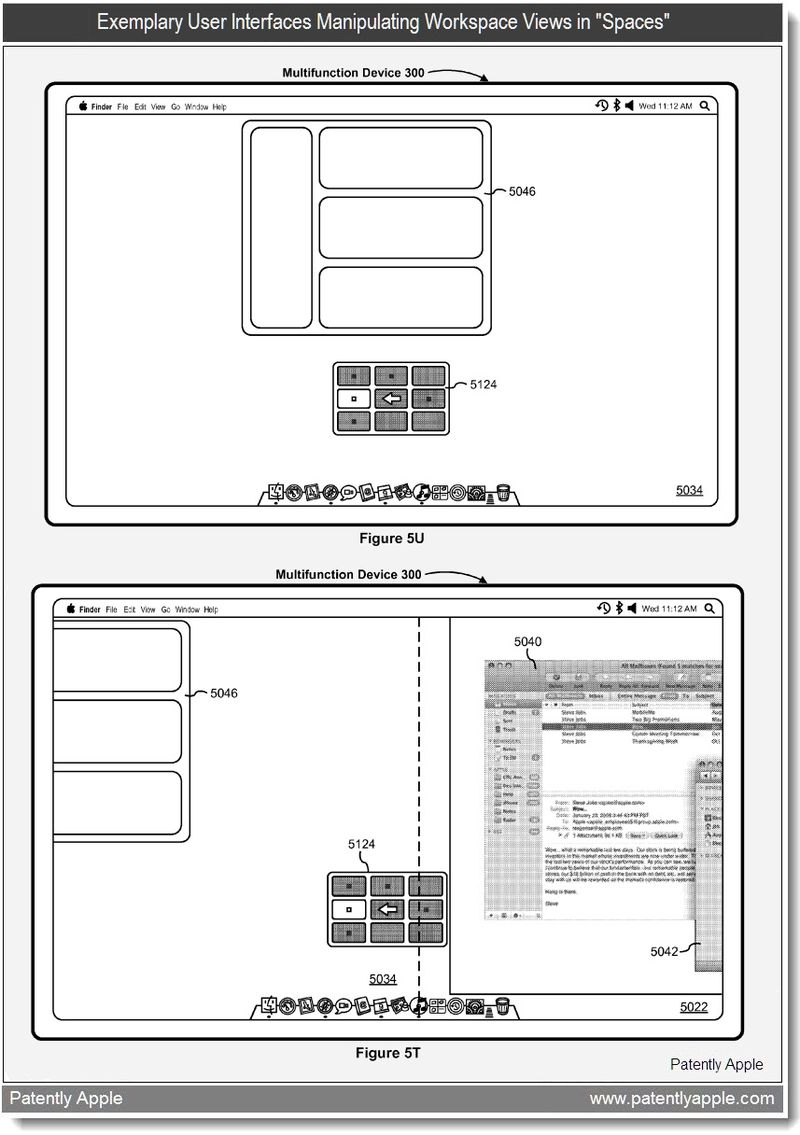 Flowchart of "Spaces" Working on iPad + 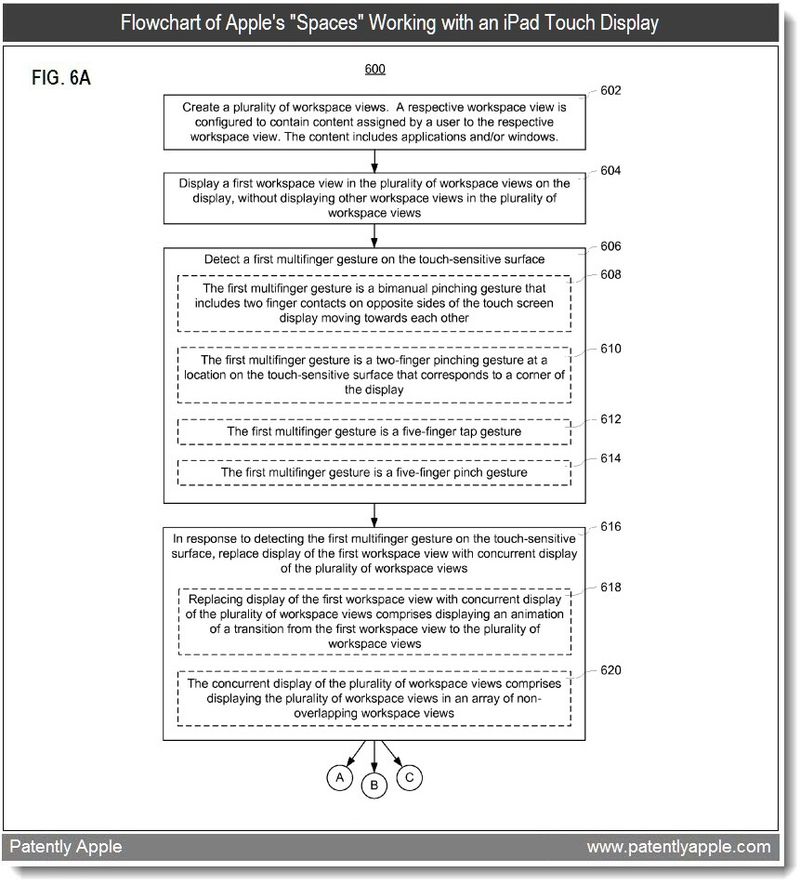 Apple credits Duncan Kerr, Julian Missig, Jonathan Koch, Avi Cieplinski, Michael Victor, Jeff Bernstein and Myra Haggerty as the inventors of patent application 20110078624, originally filed in Q3 2009. Other related patents that surfaced today include 20110078560 (re: Keynote for iPad) and  20110078622 (re: iCal for iPad). Both of which are now patent fulfilled.

I agree with Rom and have also thought the same about these October iPad 3 rumors, it's not for an iPad, it's something bigger and better, the perfect 'gift for the holiday's' and another 'magical' advancement in personal / business computing. They owned the tablet market, this is where macosx and desktop machines are really going to bring Apple full circle on a wide scale. Give us a 17" touch screen beauty Apple!

Not strange at all. Some 3rd party apps conflict with the system multitasking gestures. Developers get the gestures early so they can fix their apps before users get the gestures. It wouldn't surprise me at all if in iOS v5, the same four fingers up gesture shows Mission Control, just like it does in Mac OS Lion. But either way, the apps have to be fixed first.

I would be more inclined to believe the future of Mac OS is a MacBook Air with 2 touch screens in it than believe we will see an iPad-like Mac. The lower touchscreen could be a mixer in Logic, a video controller in Final Cut, a graphics tablet in Photoshop, a keyboard in Pages.

I'm skeptical of any change to the Mac form factor that makes it more like an iPad, because we already have an iPad, and we still need to run Mac apps. If you look at Lion, a full screen app is just a single app in a single Space, but there is still a Space that shows the Desktop and Dock, and there is still a Terminal app that gets you a command line. None of these things can be taken away. That is why Apple seemed so reticent to add any more features to Mac OS X than they had to. If you imagine we have iPads but no Macs, Apple might say, what if we made a 2-screen iPad, and they would come up with a MacBook Air with 2 touch screens in it. In other words, if we didn't have the Mac, Apple would probably invent it. I don't think they are looking to deinvent it. The Mac is the very best iPad accessory you can get, and vice versa. OS X is a great family.

For me this "Spaces" is not for the iPad but for another future tablet like TabletMac or Apple Slate working on Mac OS X Lion.

I'm a Graphic Designer and I think Apple is preparing a revolutionary new tablet for sometime in October that's more professional than the current iPad and with a stylus (Apple stylus patent are already on the web...).

I also think that a new iMac Touch will be launched with or after Mac OS X Lion's presentation. This iMac touch or MacBook Touch will work with this Spaces, one or the evolution present in Mac OS X Lion. This is why the patent graphic shows the Mac OS X icons and not the ones from iOS.

Sorry for my english, I'm French :-) thanks for this article!

Spaces, or Mission Control, Exposé Would make much more sense than the developer beta 4 finger swipe, that throws you straight into the other apps that are available to multitask to. Isn't more likely covering their bases, than specifically talking about the iPad? The pictures show OS X running. It was strange how Apple left the developer 4 finger gestures in the iOS build - seeing as iOS5 is going to be launched post-WWDC, we may find out more at WWDC once there's a developer build released and more news.

How to make unique gestures that don't disrupt the normal iPad experience is just one issue - take the 4 finger swipe - if you've used Garageband, that's one app that allows multiple fingers to be used to hit piano keys for example, and can easily cause false positive swiping between apps.