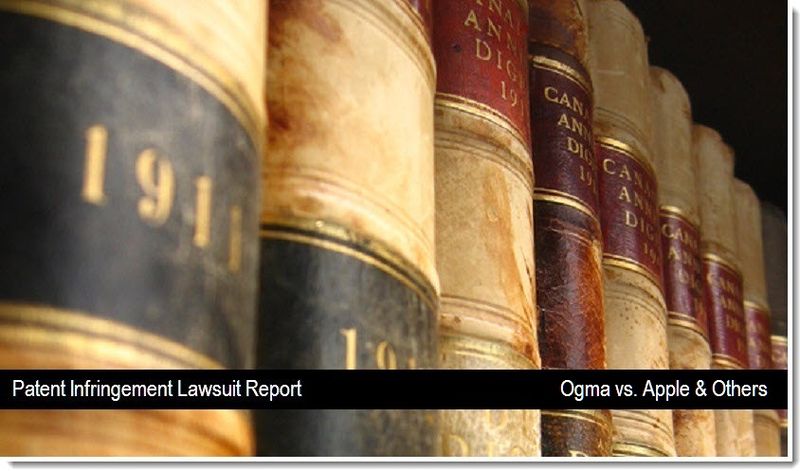 Court documents have revealed today that Ogma LLC has launched a second patent infringement case against Apple dealing with video formats and aspect ratios for displays. Their first lawsuit was reported on this past weekend. On a second front, Patently Apple has just learned that Apple has launched a breach of contract lawsuit against Motorola. With a number of sealed documents found within a barrage of documents, we find it difficult to assess what the heart of this case is all about at this point in time. But it's certainly an interesting twist in the Apple vs. Motorola legal wars.

Court documents relating to the Ogma case state that on information and belief, without a license or permission from Plaintiff, Defendant Apple has infringed, induced others to infringe, and/or contributorily infringed, literally or under the doctrine of equivalents, one or more claims of the '427 Patent. Defendant Apple did so by importing, making, using, offering to sell, and/or selling products and devices that embody and/or practice the patented invention. Without limitation, several examples of Apple's infringing products are the iPhone (original), iPhone 3G, iPhone 3GS, iPhone 4, iPod Touch (1st, 2nd, 3rd, 4th generations), and related families of products. Defendant Apple's infringement of the '427 Patent has caused substantial damage to Plaintiff.

About The Patent in Question

The case was filed in the Texas Eastern District Court. The presiding Judge in this case is noted as being Judge T. John Ward. As we stated in our weekend report, we're not able to find Ogma in a Google search which likely means that they don't really make a product. And, considering that both of Ogma's patents were acquired by assignment, it would appear, at least on the surface that this could be a classic patent troll in action.

Legislation that just passed in the US Senate last week, should go a long way to improve the quality of patents and more importantly, curb frivolous litigation as this case appears to be. Of course this is one man's opinion and I'm sure that Ogma will have their day in court.

Apple vs. Motorola – Breach of Contract

Apple has launched a Breach of Contract lawsuit against Motorola. The documents that are coming to light now are far too many to review as you could see below. The case was launched in Wisconsin Western District Court and the presiding judge will be Barbara B. Crabb. The case number for this lawsuit is noted as being 3:2011cv00178.

Update 3 PM MST: Patently Apple is consulting with our IP Expert Matt Macari of Skaar, Ulbrich, Macari on this matter to see if he could shed a little light on this case for us and our audience sometime tonight. So stay tuned and watch for Matt's comment in our comment area below later this evening (hopefully) or in the morning. Update II - 9:00 PM MST: See our new "Motion to Seal" information provided for you below. 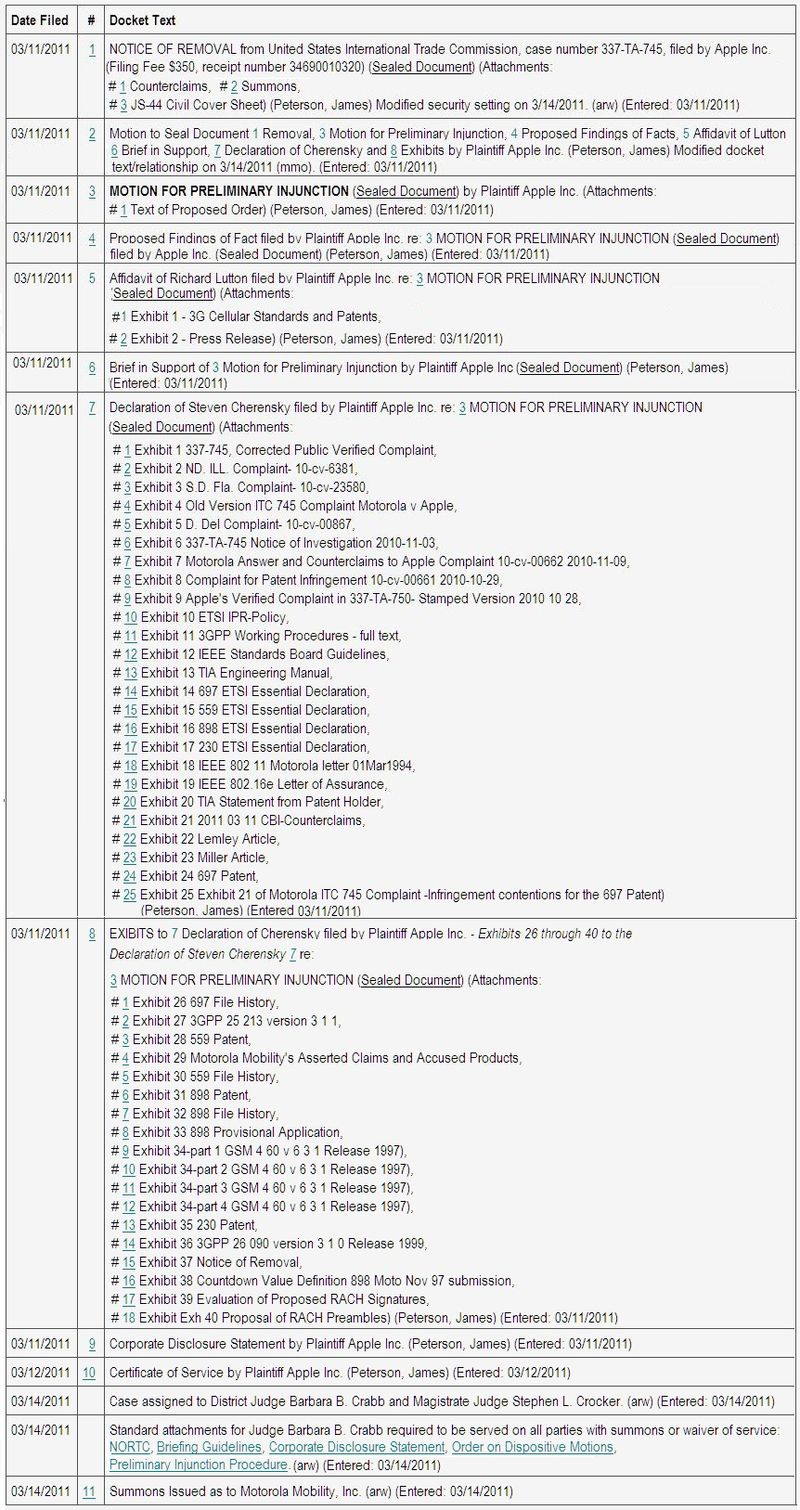 After careful review, it's clear that Apple is determined to keep the information about this aspect of the case confidential under a Motion to Seal order. You'll note on Page 2 below, Apple states the following: "Finally, Apple and Motorola are currently involved in parallel litigations, in which the parties have signed protective orders, which limit access to both parties' documents to counsel involved in the relevant disputes. Therefore, both parties have indicated their intent to keep the underlying facts, and any supporting evidence or documents, in this case confidential." 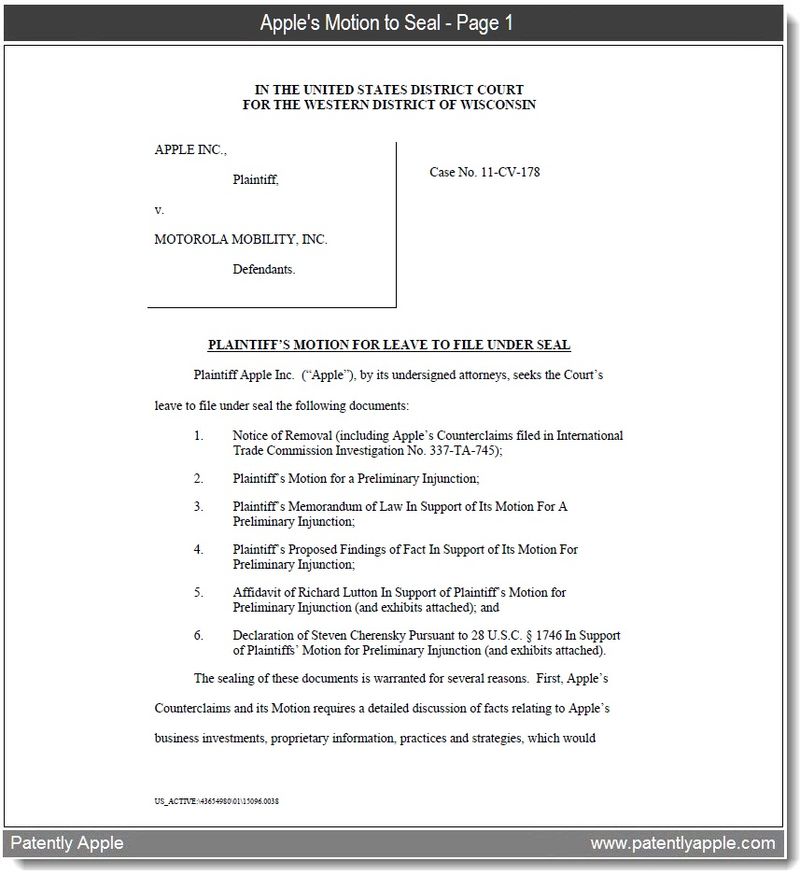 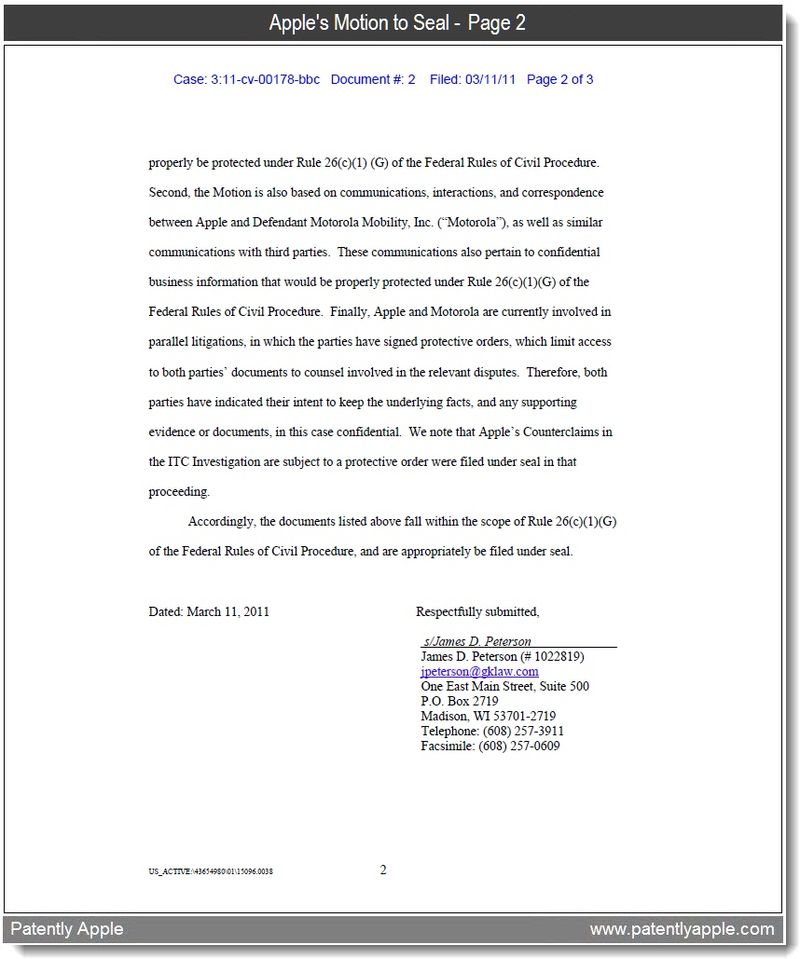 With that said, Patently Apple would like to thank Matthew Macari for providing us with this document. While it's not an answer, you at least know why we can't provide you with one.