Apple Wins Patents for Shake, Spotlight and the Clickwheel 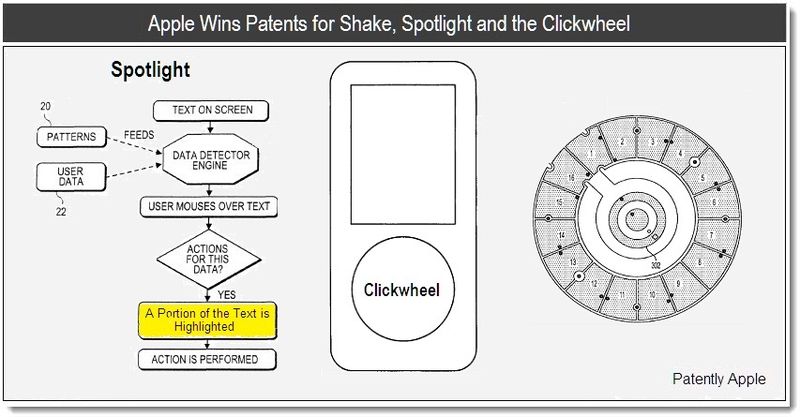 The US Patent and Trademark Office officially published a series of 22 newly granted patents for Apple Inc. today. In our third and final report of the day, we say goodbye to Shake, get ready to bury the clickwheel and lastly – take a look at pattern searching via Apple's Spotlight – that's still alive and well.

Apple has been granted a patent for Spotlight under the title of "Pattern searching methods and apparatuses."

The pattern search engine receives a text which is to be searched for known patterns. This text may be a word processor document or an email message. The text is often encoded in some standards-based format, such as ASCII or Unicode. If system is implemented in a mobile phone, the text may also be an SMS or MMS message. If system is part of an instant messaging application, such as Apple's iChat , the text may be a message text received via such an instant messaging application. As a further example, the text may also correspond to a web page presented by a web browser, such as Safari from Apple which you could see at the bottom of the graphic below. 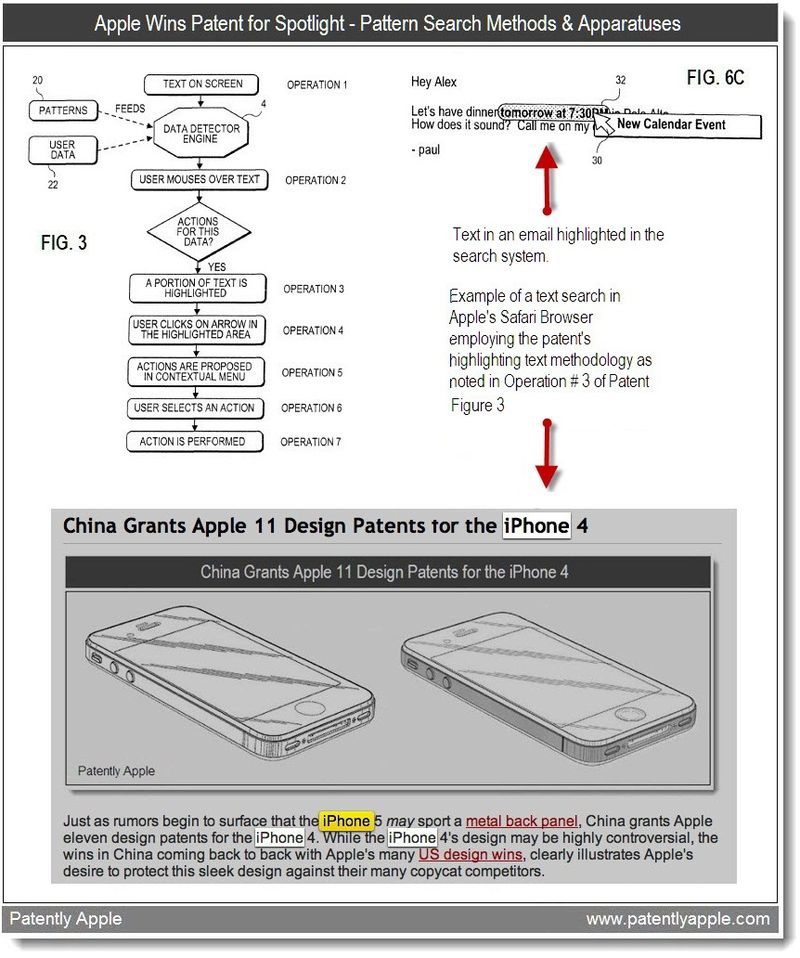 Apple's patent FIG. 3 is a flow chart illustrating the main operations of a preferred pattern detection application, as seen by the user, implementing the inventive pattern identification method; In Patent FIG. 6C Clicking on the arrow 32, the user initiates the action "New Calendar Event" associated with the identified pattern. The last graphic is to illustrate how when you search for a word in Safari on a Mac, the document will first darken and then the text that you're searching for will stand out dramatically as shown above.

Apple has won their most elaborate clickwheel related patent ever under the title "Compact input device." It's unknown at this time if Apple ever intends to update their iPod Classic to a taller styled unit as the patent graphic below suggests or simply repurpose it for a future device such as a camera – but this 2008 filing suggests that they've done some updating to the original clickwheel design. 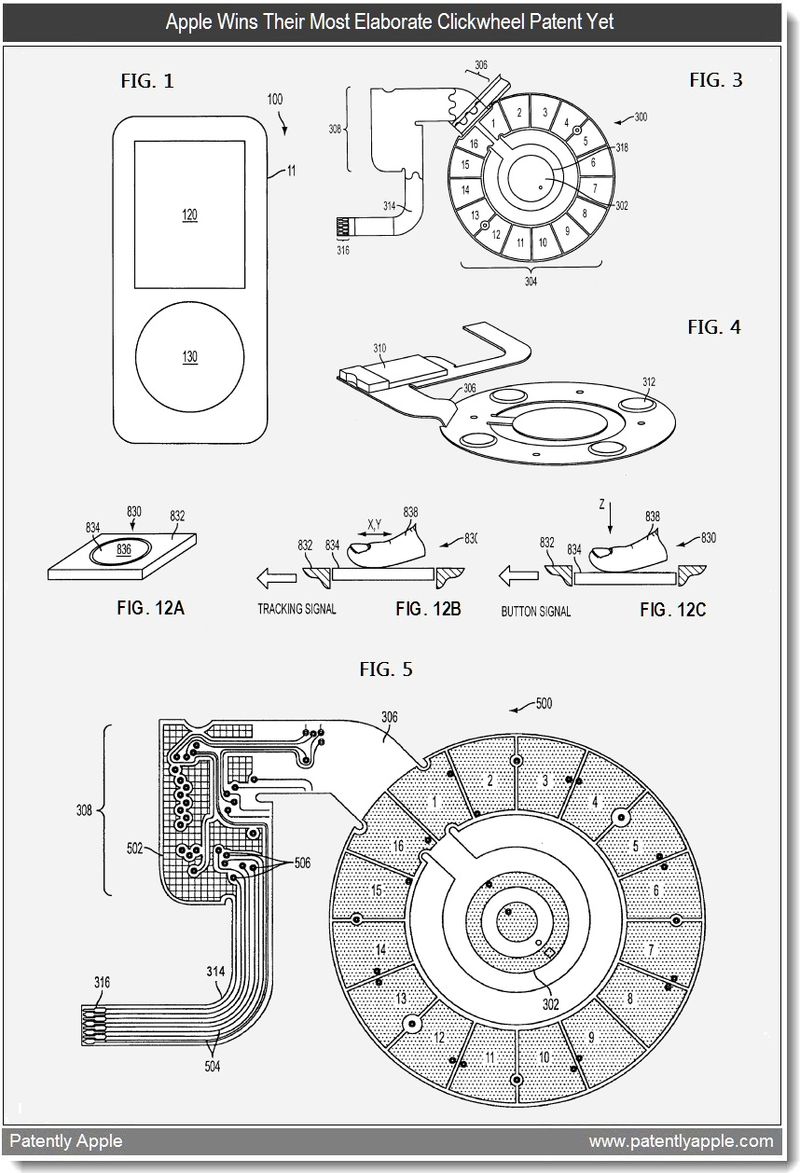 By including a second conducting layer that includes traces, the amount of area on the first and third conducting layers dedicated to traces may be reduced. This may result in an input device that has a smaller sensor/switch area and/or an input device that includes a lager sensor or switch area. In addition, if capacitive sensors are used for the sensors, by locating traces on another layer parasitic capacitance issues that may result when the traces are located too close to the sensors may be reduced.

For more information on this Granted Patent, see 7,910,843. Apple credits Fletcher Rothkopf, Jan Moolsintong, Joseph Fisher and Wendell as inventors of this patent. The taller styled iPod has been a curious design favorite in a number of patents including this one. Yet with the multi-touch trend of hardware now in play with Apple's iPod touch, iPhone, iPad and even the latest iPod nano, I doubt if there's any life still ticking in a clickwheel driven pod of any kind in the labs of Cupertino these days. Long live the clickwheel.

Apple has been granted two patents relating to their defunct image compositing package known as Shake. Shake was widely used in visual effects and digital compositing for film, HD and commercials. 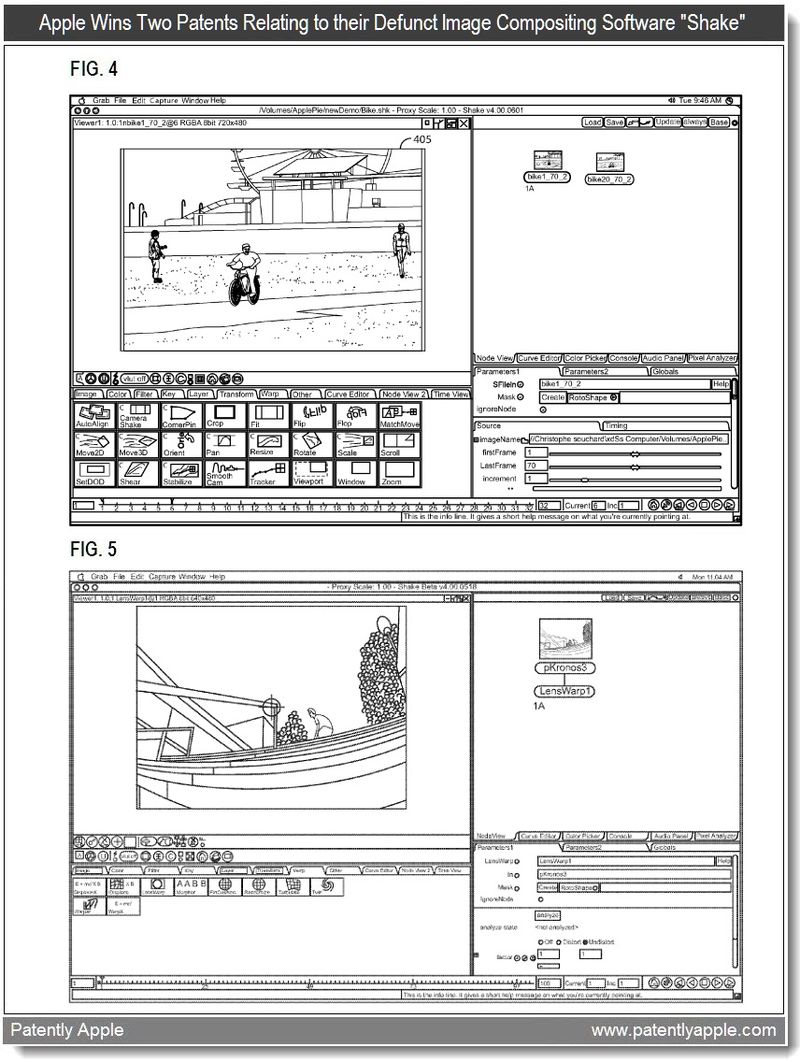 The first granted patent is 7,912,337 titled "Spatial and temporal alignment of video sequences." The second granted patent is 7,912,317 and is titled "Estimating and removing lens distortion from scenes." Patent FIG. 4 of the first patent illustrates a frame in a first video sequence. Patent FIG. 5 of the second patent illustrates an example of an image that is distorted by the lens in a video compositing embodiment. Unless Apple intends to resurrect this software, it looks like it has bit the dust for good. RIP.