The US Patent and Trademark Office officially published a series of 20 newly granted patents for Apple Inc. today. In our first report of the day, we look at several minor patents including a design win for the Mac Mini that was issued to Apple in China along with Apple's iPhone and iPad antenna system. Yet the most important patent in this first group goes to a series of newly advanced inductive charging docking stations that have never seen the light of day. With HP's TouchPad coming to market this summer with cool wireless charging capabilities, Apple needs to get these patented docks to market before HP scores a major point with consumers this fall. 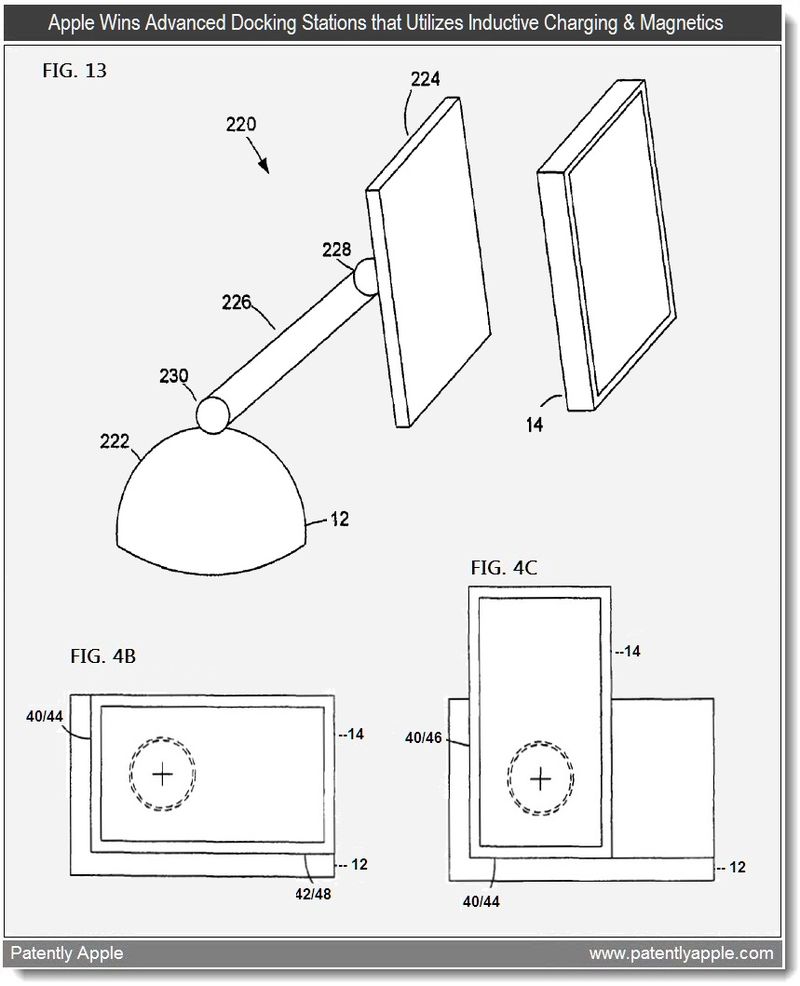 In Apple's patent FIG. 13 we see a perspective diagram of a docking station which includes a base and a multi degree of freedom platform that is reminiscent of the swing arm styled iMac of 2002 in miniature. The platform (224) is coupled to an arm (226) via multi pivot joint (228) such as a ball and socket joint, and the arm is coupled to the base (222) via a second multi pivot joint (230) such as a ball and socket joint. Each of the joints 228 and 230 includes retention features for holding various positions and angles. Generally speaking, this arrangement allows the platform to yaw, pitch and roll as well as to translate in x, y and z. The user could therefore adjust the position of the platform to the best position for use. As shown, an iOS device like an iPad (14) is configured to be attached to the platform via magnets.

Technically speaking, opposing power transfer mechanisms are inductively based. The docking station includes a primary inductive coil and the iOS device is to include a secondary inductive coil that cooperates to form a two part transformer.

When the iOS device is docked, the complete transformer is created, i.e., the inductors are aligned along their axes and placed side by side without making electrical or mechanical contact. During power transfer, current is made to flow through the primary inductive coil. The resulting magnetic flux induces an alternating current through the magnetic field and across the secondary inductive coil thereby completing the circuit. The AC power received by the secondary inductive coil is converted to DC power for operating the iOS device and/or for storage in the battery.

Apple credits Steve Hotelling and Gus Pabon as the inventors of Granted Patent 7,916,467, originally filed in Q1 2010. Some of Apple's associated patents go all the way back to 2005 and so Apple doesn't have a valid excuse for not having inductive charging in play by now. Let's hope we see this come to market shortly.

To satisfy consumer demand for small form factor wireless devices, Apple is continually striving to miniaturize the antennas used in their portable devices such as the iPhone and iPad. Apple's newly granted patent covers one suitable arrangement consisting of three antennas in the wireless communications circuitry. 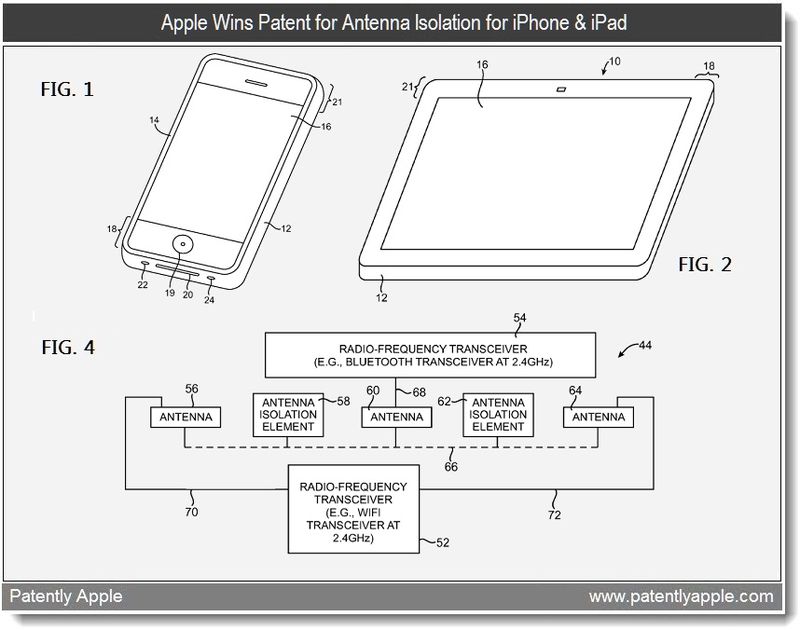 In June 2010 Apple was granted a patent for their fourth generation iPod nano. Today's granted patent D635,123 covers that very same design. In other industrial design news, China has granted Apple four registered designs for their Mac Mini under numbers 1002345.5M001 though to 5M004. 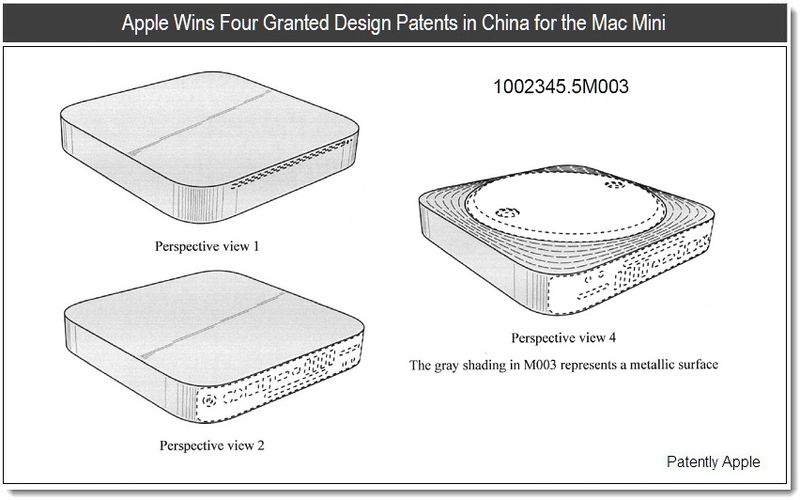 @Don. For 90% of working adults, charging at home is all we'll need. I'm sure that we'll always have the option to still plug it in to charge like we do today. But that's what? 10% of the time. So inductive charging is still the way to go for working adults.

HP will have it in the early fall and no excuses, Apple's ios devices should too. The old stupid sales talk of "we're late with x-feature because we wanted to do it better" is seen for what it is. An excuse. Will Apple have to say that again that they're late because of x-excuse? Let's hope not.

Wireless charging is cool at home...but what about in the car? On on the plane? Never say never, but the puzzle is incomplete. And as far as no buttons, I keep thinking fondly of the 3rd gen iPod...

Looks to me like along with iPhone and iPad will lose buttons. Also possibly lose the cable and go completely wireless for syncing.Because recharge by induction looks so cool. No more wires for recharge or sync...