The US Patent and Trademark Office officially published a series of 23 newly granted patents for Apple Inc. today. In this second round of granted patents, we primarily focus on the technology behind Apple's World Travel Adapter Kit and an important technology behind their word processing app "Pages" called semantic reconstruction. Yet the most important granted patent of the day, in our view, goes to Apple's virtual keyboard technology. This area of technology is one of Apple's strong suits and so this marks an important patent win as they push forward and take virtual keyboards to the next level.

Apple has been granted a core virtual keyboard patent for touchscreen devices. In order to keep the nuts and bolts of this feature a secret from prying eyes, the patent was filed with the USPTO only two months prior to the iPhone's official launch date of June 29, 2007.

While Apple's virtual keyboard is without a doubt one of the best in the industry today, Apple is continually pushing the envelope in their R&D efforts to find and deliver a superior tactile feel to their virtual keyboards as well as for future reconfigurable MacBooks. 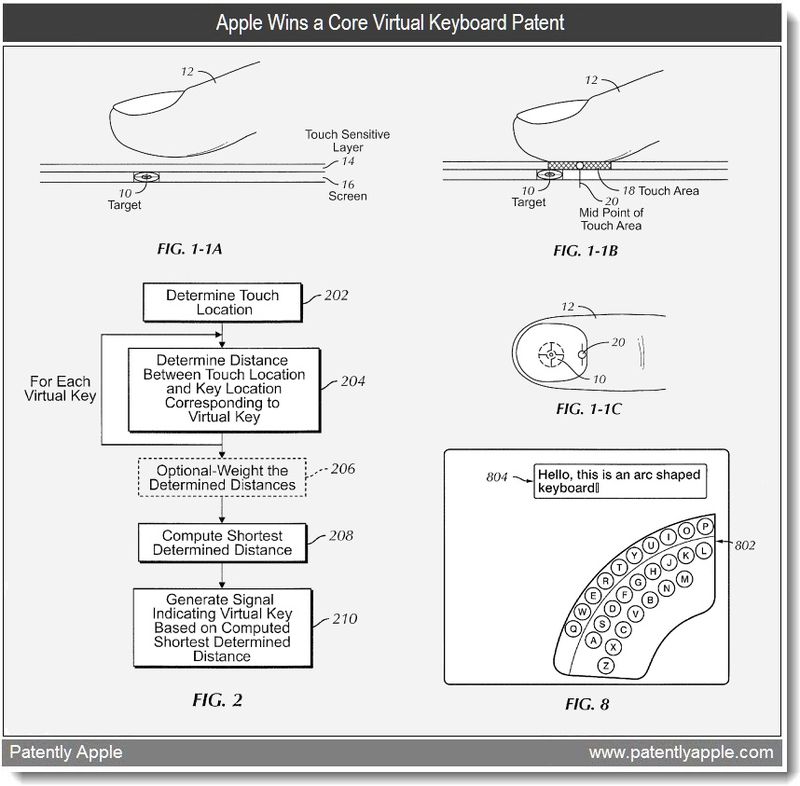 In Apple's patent FIG. 2 noted above we see a flowchart illustrating a particular example of a virtual key activation method and finally in patent FIG. 8 we see a possible future arc-shaped virtual keyboard illustrated that's noted as being particularly suited for thumb activation of smaller touchscreen devices.

Trying to get my head around this patent this morning has been difficult to say the least. However, though the patent is about semantic reconstruction, in the bigger picture it appears to relate to Apple's iWork app called "Pages." Core of the patent details the process of a program like Pages having to convert very different and complex file formats from programs like Microsoft's Word, Excel or PowerPoint, or created indirectly from the content-editing programs, saved in a format such as PDF (Portable Document Format). Who knew the conversion process was so complex? If you didn't know, then this patent will teach a lesson or two, that's for sure. In a nutshell, see Pages "Compatibility" section. 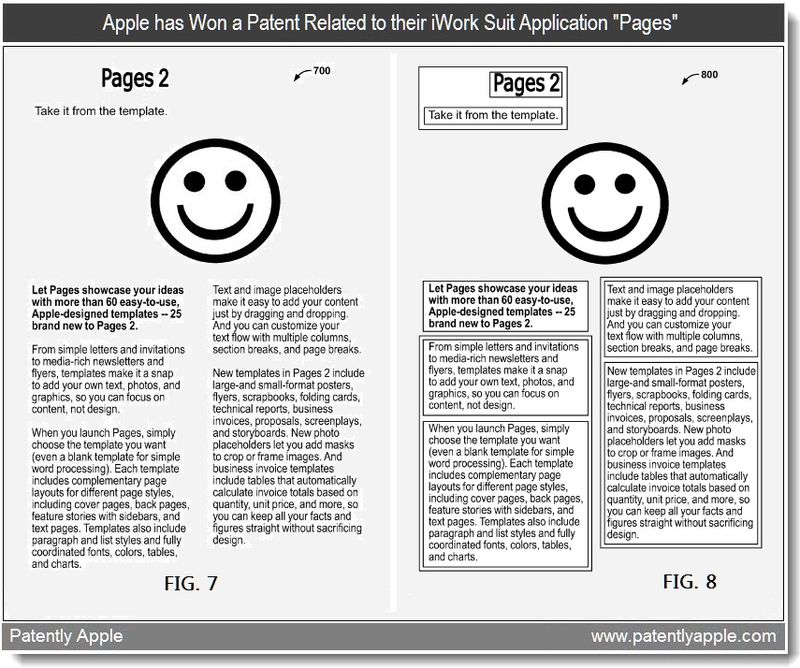 Apple has been granted a patent for "Compact Power Adapter" which relates to the World Travel Adapter Kit. The World Travel Adapter Kit includes a USB power adapter, a USB cable, and a set of six AC plugs with prongs that fit different electrical outlets around the world. For world travelers, this is the perfect kit to ensure power connectivity in most countries you may travel to. To read all about the technicalities of this granted patent, see patent 7,896,702, originally filed in Q2 2009. Apple credits Kurt Stiehl, Cameron Frazier, Jonathan Aase and Mathias Schmidt as the inventors.

Apple has won a patent which relates to methods and systems for editing blocks of a web page in an email application. Apple's patent discusses Apple's mail client application and points to the use of Webkit or other HTML rendering engines. Unless you're an engineer or programmer, skip this cross-eyed read.

Another Apple granted patent published today discusses an invention involving circuits, methods, and an apparatus that allows a DisplayPort compatible host device to control the timing and data rate or speed of data transactions executed by an adapter over an I.sup.2C bus when communicating with a legacy monitor.