The US Patent and Trademark Office officially published a series of 20 newly granted patents for Apple Inc. today. In our second patent report of the day we focus entirely on one of Apple's original iPhone patents that relate to deep touch panel technology. Being that this patent only became public days before the original iPhone officially debuted, we think that this patent deserves the spotlight. There's no doubt that this vital patent could be used in any current or future patent infringement case brought against Apple or cases that Apple may open against overstepping competitors.

Apple wins a patent for the longest patent title in the world: "Bottom-up watershed dataflow method and region-specific segmentation based on historic data to identify patches on a touch sensor panel." With that aside, Apple has been granted a patent that relates to touch sensor panel techniques for identifying touch patches.

Apple states that users of touch devices could touch the sensor panels using different fingers, hand positions and orientations, and apply these touches with varying degrees of force. It could be difficult to properly interpret the touch events detected on the sensor panel and take appropriate actions. This is what Apple's patent addresses in detail. 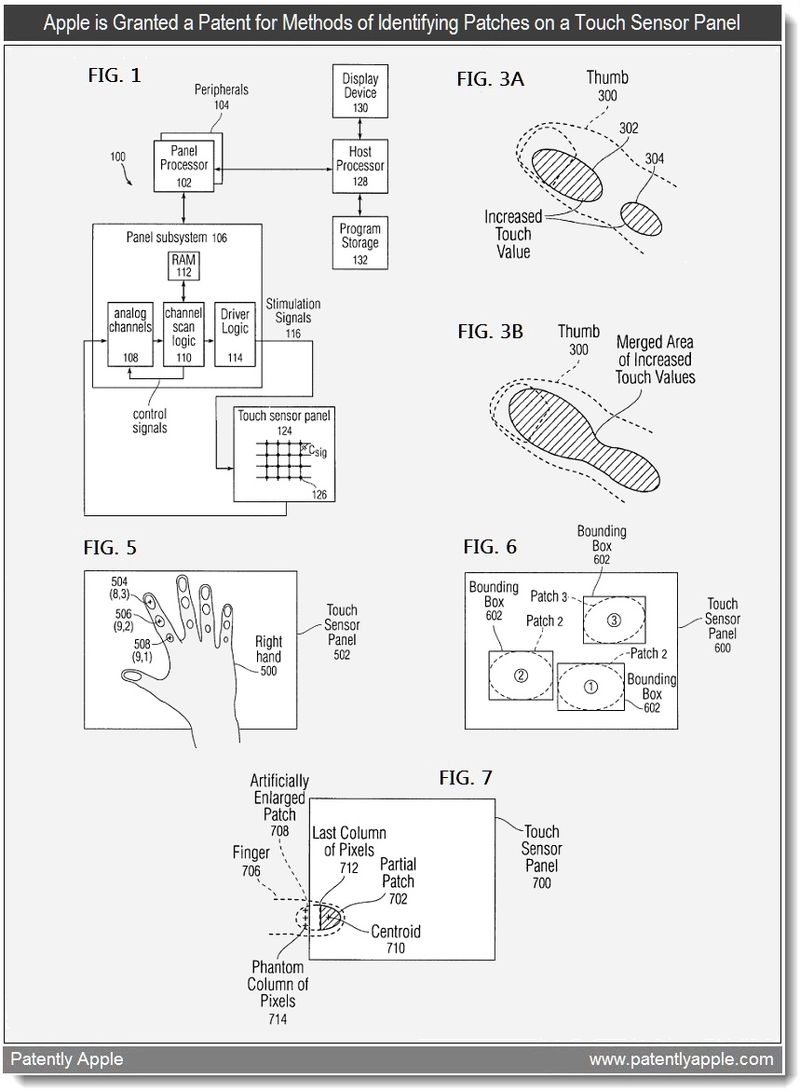 About the Patent Figures

Apple's patent relates to applying a watershed algorithm to pixels and their touch values obtained from a scan of a touch sensor panel to determine patches corresponding to images of touch. Prior to applying the watershed algorithm, background pixels having little or no touch values could be eliminated from consideration, and some amount of smoothing could be performed on the pixels to connect overly segmented patches. After the watershed algorithm has been applied, patches whose pixels are substantially linear (e.g. lie within a single row or column), or patches having a very small number of pixels could be eliminated from consideration as being attributed to noise or other errors.

Additionally, if a small patch is located substantially directly below a medium-sized patch, this could be indicative of a fingertip and phalange patch, and these two patches could be merged. If a large object such as a face or ear is expected, the merging criteria described above can be made more aggressive under the assumption that the patches were generated from a single large object. Based on the location of the identified patches, hand or finger orientations could be determined, which could be used to further identify which patches could be merged together. Bounding boxes defined around each patch could limit the number of pixels that need to be iteratively considered during post-watershed processing.

Centroids, which define the center point of patches, could be used in post-watershed processing. However, partial patches formed at the edges of the touch sensor panel due to the presence of a finger only partially over the touch sensor panel could lead to inaccurate centroid calculations. To improve the accuracy of centroid calculations for partial patches at the edges of touch sensor panels, a percentage of the pixels in the last column of the patch could be duplicated into an artificial phantom column of pixels that could be used to generate a more accurate centroid location.

Apple credits Wayne Westerman and Joshua Strickon as the inventors of Granted Patent 7,916,126 originally filed in Q2 2007 just as the iPhone was about to debut.