Apple improved facial recognition in iLife 2011's iPhoto while adding new slideshow features and themes. It now appears that Apple is already working on the next round of improvements by adding more advanced facial recognition features to iPhoto for home slideshows or work presentations. Interestingly, the patent shows us that this iPhoto feature is designed to work on iOS devices. Another Apple patent published today discusses a new handheld device latch that will make it easier to access batteries. Apple is mum as to which handheld device the latch is for. And lastly, there's news of a third party developer working on a tripod for iPod and other iOS devices that could help us take steadier videos and photos. That was only a matter of time, though it probably won't be ready in time for this summer.

Apple's patent generally relates to facial detection with respect to digital images, and to using facial detection information associated with images in the automatic generation of a slideshow.

One or more images could also be selected for inclusion in a slideshow based on faces appearing in the images. For example, an individual could be identified as a subject of a slideshow and images in which the individual appears could be automatically selected for inclusion in the slideshow. Further, facial detection information could be used to organize slides within a slideshow. For example, images featuring one or more common individuals could be clustered such that they appear in the same slide or sequential slides.

Apple recognized a need to use facial detection information associated with an image to determine the layout of a slide presenting that image. The need to crop an image, in accordance with facial detection information, to conform to a drop-zone included in a slide was also recognized. Further, Apple recognized the need to configure a slide such that one or more faces are visible during presentation of the slideshow.

There was also a need to allow animating a slide based on facial detection information associated with an included image. For example, the need to automatically detect a dominant face as a subject of the animation was recognized.

Apple also recognized the need to permit animating a slide based on an automatic determination of one or more popular faces, e.g. with respect to the slideshow or an image collection. They also recognized the need to permit suggesting a slideshow style based on facial detection information corresponding to the images included in the slideshow. Accordingly, the techniques and apparatus described in the patent implement algorithms for automatically generating a slideshow based on facial detection information associated with one or more associated images. 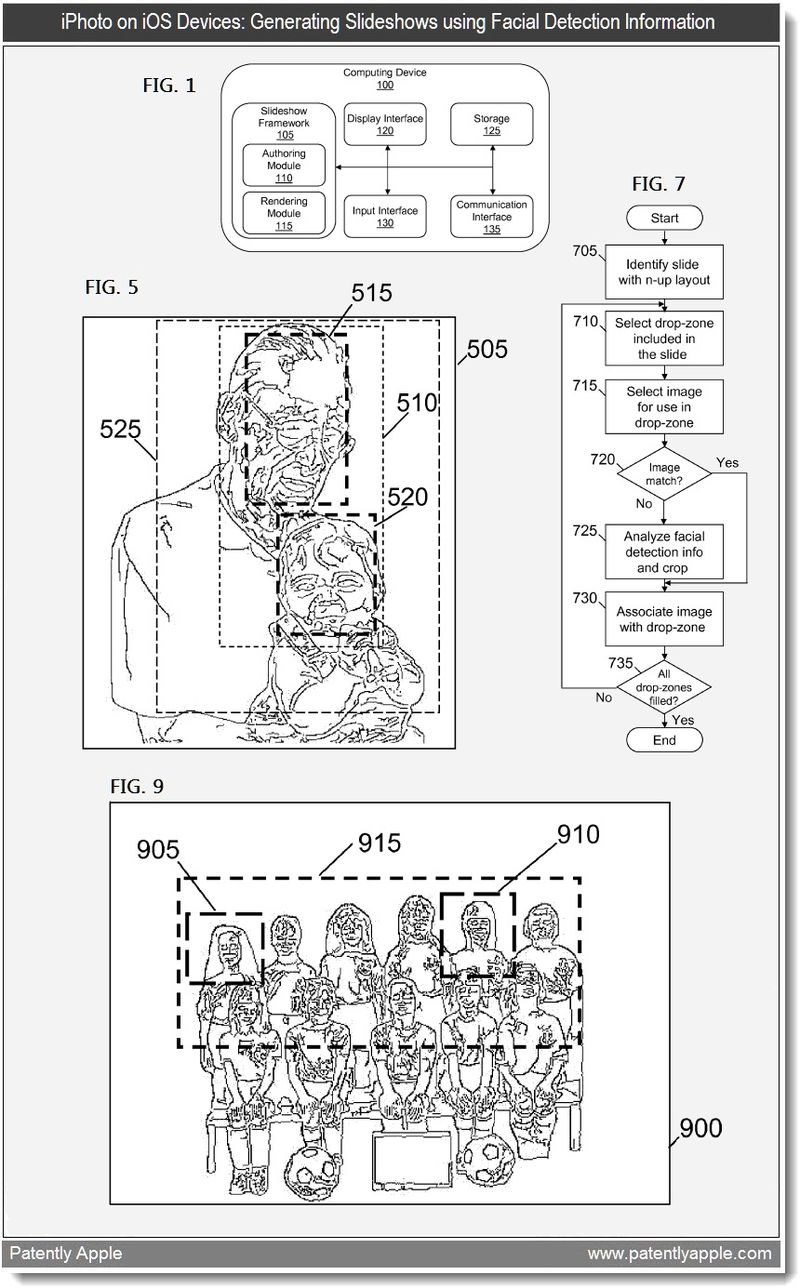 Apple's patent FIG. 1 illustrates that the primary device that the invention is meant for is that of an iOS device such as an iPod touch, iPhone or iPad – though the invention will work with any Mac so that the user could set up the slideshow in a traditional manner. Further, the iOS devices could be configured to host a slideshow framework 105, providing an application context in which slideshows could be generated and executed. In some implementations, slideshow framework 105 could be hosted as part of a parent application, such as Apple's iPhoto.

Apple's patent FIG. 7 shows a flow diagram describing an exemplary process for determining a layout, based at least in part on facial detection information, for a slide including multiple drop-zones. And finally, Apple's patent FIG. 9 shows an example of animation in a slide based on facial detection information. A slide 900 representing an image, e.g. a soccer team, could be animated as part of a slideshow.

Patent 2: A New Fastener for Handheld Device or Computer

Apple has come up with a new mechanical fastener that's a compact integrated latch system well suited for use in small hand held electronic devices that uses batteries. The system is to provide an easier latch to get at the batteries. Apple is designing it to have characteristics that don't unduly burden a product design and that is at least compact in nature and aesthetically pleasing in both the latched and unlatched state. The integrated latch system includes a latch, a keeper coupled to the cover, and a discrete actuator. 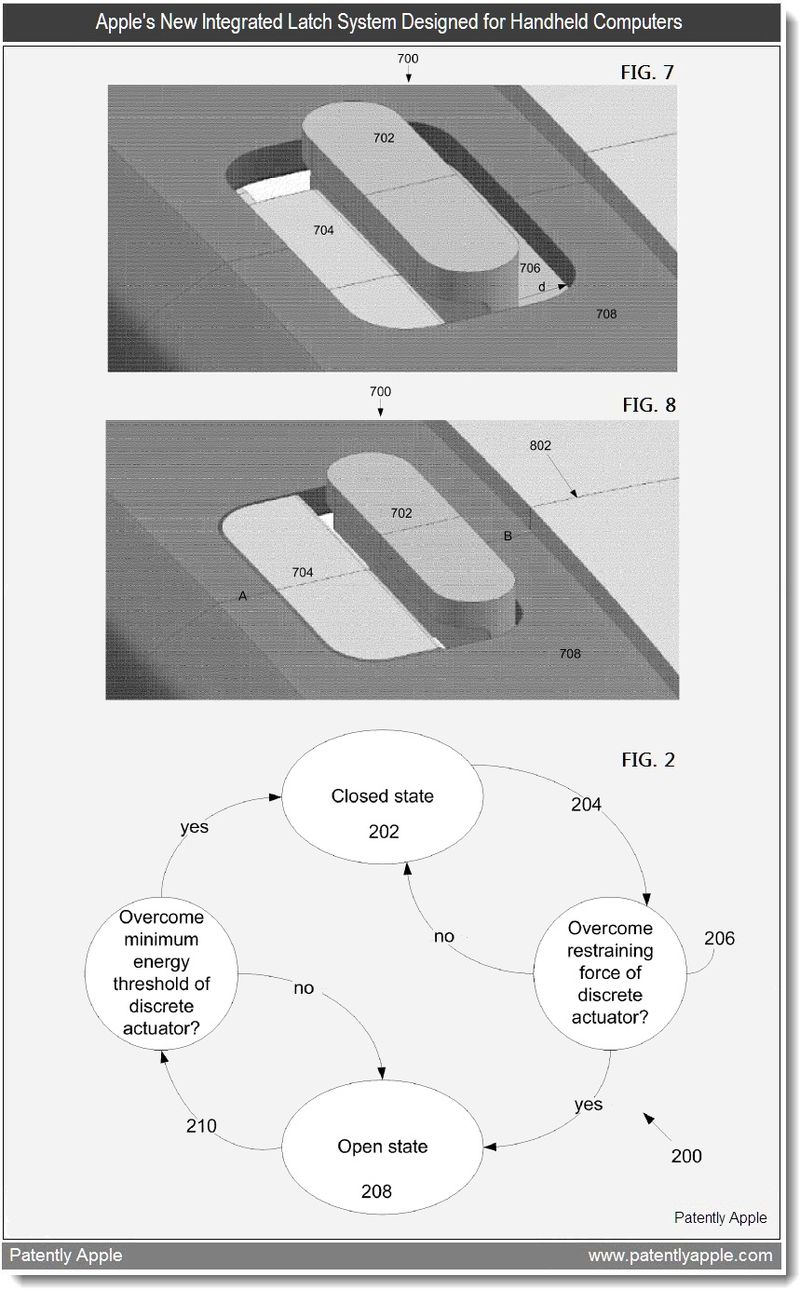 Apple never identifies which handheld device(s) will eventually use this new latch system, though they loosely use the term "computer." Although it's likely a replacement latch for the Apple Remote, Apple may have other plans for this in the future. Do you have an idea or opinion on which devices Apple could be thinking of using this latch with? Let us know.

See patent application 20110068587 for more information. Here's a temporary link that's only good for about 24 hours.

Patent 3: A Third Party Tripod for iPod touch & iPhone in the Works

Hidden within a group of Apple patents this morning was a new patent idea from the Tiffen Company, a third party Apple developer who created the Steadicam Smoothee for the iPhone 4. 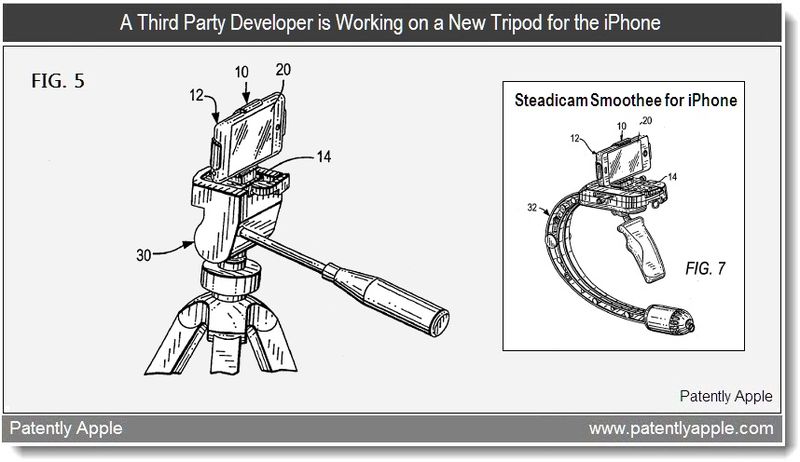 It's not a ground breaking idea but it would fill a market need: A tripod for the iPod touch or iPhone. I've been personally thinking of buying a new simple camera like the Nikon CoolPix P500 to finally create some iMovies of the Canadian Rockies this summer. With a normal camera, there's a huge choice of tripods available, but not so for the iPhone or iPad, of course. So it's nice to see Tiffen's patent illustrating that a solution may be in the works. Not in time for my project, but hopefully for next summer.

So, if you primarily use your iPod touch, iPhone and maybe iPad 2 for your home videos and/ or still shots, a little relief may be on the way. In the interim, Tiffen just release a stablizing device for the iPhone 4. While it's not a tripod, you just might find it of interest. See patent application 20110069947 for more info or use this temporary link that's good for about 24 hours.

@ pjs_boston. Ding, ding, ding, we have ourselves a winner!

Good one. It fits the right size and you're likely bang on. Thanks for the feedback.

The latch is for the battery cover on the Magic Mouse.