A few minor yet interesting Apple patents published today show that Apple has invented a new remote camera control accessory that might come in handy for photo and video shoots with the family. It sounds like it may also be used for other purposes like a security system. Another patent shows that Apple is working on new audio controls for iOS devices and even has another version of a DJ app for the iPhone. Lastly, a news item out of Japan states that a new navigation based app is coming to the iPhone on March 18 to those thinking about buying a new Honda this year.

In the first Apple patent that we're covering in this report we take a quick look at Apple's venture into an accessory for remotely controlling an iOS device's camera.

Apple patent FIG. 1A illustrates two views of a portable media device (PMD. In this case an iPhone) that has a built-in camera.

The remote camera controller accessory 150 could provide capabilities related to remotely controlling the iPhone's camera using wireless signals such as infrared, Bluetooth, or the like. The accessory is shown to have its own built-in display that is capable of displaying information received from the iPhone including a still photo or video recording, in addition to other information.

Although the patent never really provides any interesting scenarios, one could expect the remote to come in handy when on holidays and you want to film yourself or take a photo of you and your family together. Apple will likely have to also sell a custom tripod and/or other kinds of stands to support all iOS devices if this remote is to be of any value. Apple could also work with a few third party developers as well so as to have this ready on launch date.

The accessory could be used for other situations to of course. Perhaps you'll be able to set one up in a bedroom to monitor your new born. The camera could be set to notify you of any changes in movement in that environment. The patent states the controller could be set to receive "notifications about camera state changes." Perhaps it could even be used as an economical security system. Though until Apple debuts this accessory, they're keeping the features tightly guarded.

In brief, Apple's abstract stat that their patent is about a method altering audio output from an electronic device based on image data. In one embodiment, the method includes acquiring image data and determining one or more characteristics of the image data. Such characteristics may include sharpness, brightness, motion, magnification, zoom setting, and so forth, as well as variation in any of the preceding characteristics. 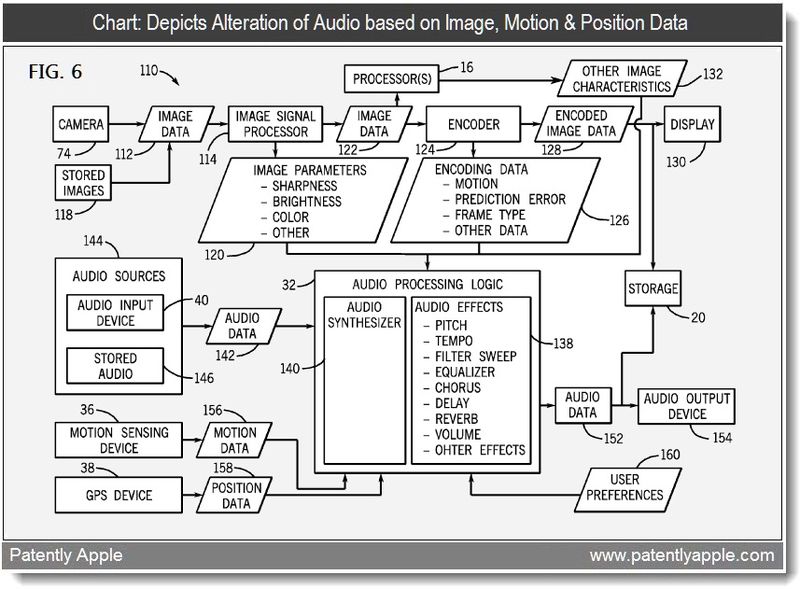 One of the more interesting applications discusses a virtual record player.

Apple's patent FIG. 19 shown below generally depicts a method for altering an audio parameter based on motion, rotational speed and/or position data in accordance with one embodiment of their invention. 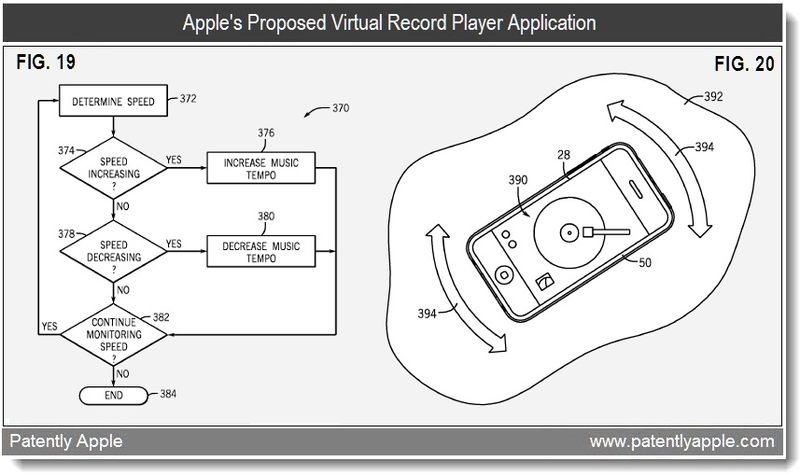 For instance, as generally depicted in Apple's patent FIG. 20, we see an iPhone running a virtual record player application. The virtual record player 390 may display one or more features of audio output that may control rotation or spinning of the turntable on the iPhone. For example, in one embodiment, the iPhone may be rotated clockwise to increase the speed of music playback, or may be rotated counter-clockwise to reduce the speed of music playback (such rotation is generally represented by arrows 394).

In another embodiment, the virtual record player application may provide a virtual "scratch" record, allowing a user to rotate the iPhone (or other iOS device) back and forth to cause it to output a record scratching effect similar to that a disc jockey may obtain with a vinyl record on a turntable.

Apple first presented the idea of a DJ app for touch displays in a 2008 patent.

We may list information about other patent applications here later today.

According to Japan's Nikkei Electronics magazine, Honda will be releasing a new navigation based app for the iPhone on March 18, 2011, well ahead of an Android version due out later in the year. The application will be available to users who registered a new vehicle in or after March 2011.

It's possible for Honda vehicle users to use the new service for free without a car navigation system supporting the Honda Internavi system. The new app is called the "Drive Locator." The Drive Locator can show a route calculated at Honda's information center using Google maps. Furthermore, it shows the location of the user's vehicle by using the GPS reception module installed in a smartphone while the vehicle is running. Below are a few screenshots.

For More Details on this, see Tech-On's report.

Wasn't Apple rumoured recently to be working with Canon? Would be interesting to see an iPhone be able to use WiFi Direct or similar to use the iPhone as a remote for a camera.