Apple loves Industrial design and that's evident in their string of creative breakthroughs for products such as the iPod, iPod touch, iPhone, iPad, iMac and MacBook Air. Furthermore, they're fanatical passion for detail ventures into every facet of design from their stunningly crafted iPhone which includes advanced nitriding stainless steel and exotic materials like Liquid Metal right through to their New York store's insanely inspiring glass architecture and their other distinctive mall outlets. Every facet of an Apple product is considered for redesign at some point in time, and today we learn that Apple is considering the use a new flat cabling system that could end our tangled-wire blues and perhaps even prevent nasty power surges.

Cables used to connect electronic devices to other components could include a conductive medium between connectors. The conductive medium typically includes one or more wires (e.g., four wires) placed within a non-conductive enclosure for protecting the wires from undesired electrical events and from damage. In some cases, the cable could be constructed by molding a sheath around wires, or by extruding a sheath that into which the wires can be threaded. The resulting cable could have a circular or elliptical cross-section, which could allow the cable to bend equally well or near-equally well in all directions. In some cases, however, the connector coupled to the wires could have a specific orientation and be more susceptible to damage or failure when the cable bends in a particular direction or orientation relative to the connector (e.g., when a cable bends away from a first connector contact and towards an opposite connector contact). In addition, the manufacturing approach used to connect individual wires to the connector (e.g., soldering) could be susceptible to bending or other cable movement in particular orientations.

Apple's patent application is about introducing a flat cable for connecting electronic devices. In particular, the invention is directed to USB or FireWire cables supported by a flexible circuit.

Many electronic cables are constructed from several distinct wires connected to connectors and surrounded by a non-conductive sheath. The resulting cable could have a circular or elliptical cross-section, which allows the cable to bend in any direction. This may not be desirable however, as bending in some directions could stress the coupling between the wires and the connectors.

Instead of using wires, a cable can be constructed using a flex as the conductive material between the connectors. Such a flattened or ribbon-like cable could be less prone to tangle, could roll more easily for storage, and can provide controlled bending in two directions (e.g., as opposed to unhindered bending in all directions).

Hopefully Apple will extend this flat flexing cabling idea to their iOS device earphones. I don't know about you, but I'm always untangling the wires and the flex cabling could be the solution.

In some embodiments, an electrical circuit can be embedded within the flex as part of the cable. For example, the cable can include an integrated circuit for electrostatic discharge (ESD), an LED, power detection, or any other suitable purpose. In one implementation, the cable can include an embedded circuit for multiplexing signals. An example of an LED solution integrated into flat cable, see patent FIG. 7 below. 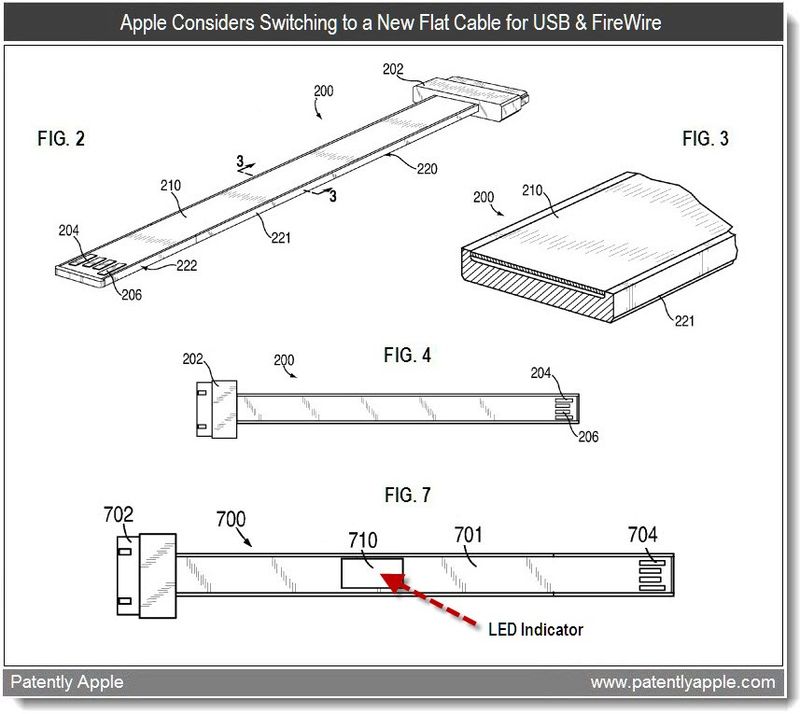 Apple states that circuitry 710, related to patent FIG. 7 above, could perform any suitable operation for the cable including for example detecting and controlling power usage (e.g., block power surges or shorts), encrypt or decrypt transmitted signals, multiplex received signals for a single channel (e.g., when providing signals between a connector having few pins and a connector having a larger number of pins), repeat received signals for transmission over larger distances, provide an indication of signal transfers to a user (e.g., via a LED), indicate whether a cable could be safely disconnected (e.g., using one or more LEDs), or combinations of these.

In theory, the LED could be used to signal a blocked surge or short by blinking red and being combined with an a sound based alert to notify the user. The same could be true in an overheating scenario.

Apple credits Christopher Prest as the sole inventor of patent application 20110061933, originally filed in Q1 2010. When Apple said to Think Different, they certainly meant it.

Below is a graphic of what they may look like. You could check out LaCie's Flat Cable line for more information. Beyond their general appearance, Apple's patent appears to be adding new features that would distinctively make it a classic Apple cable.