Apple Considers adding a little Chromatic Magic to their Mouse

In January of this year we posted a report titled "Apple Considers Integrating a Display into their Magic Mouse." This idea has once again surfaced in a new Apple patent that the US Patent Office published today titled "Incorporating Chromatic Sensors in Computer Mice." The first half of the patent discusses how the Magic Mouse will be able to improve performance when used on highly reflective surfaces such as glass, while the second half of the patent discusses how they'll be able to implement chromatic sensors so as to turn the Magic Mouse into a handheld scanner. This is a really great idea that I hope will come to market instead of being placed into File 13.

The Problem to be Solved

Electronic devices are ubiquitous in society and can be found in everything from wristwatches to computers. Depending upon particular implementations of the electronic devices, each device may have a different mechanism for inputting data. For example, some electronic devices, such as computers, often include mice. During operation of the mouse, the user may indicate movement of an indicator on the computer's screen by moving a mouse containing a light-based sensor over a surface. Reflections of the light may vary according to changes in the texture of the surface, thereby allowing the computing device to track movement of the mouse and correspondingly move the indicator on the screen. However, determining changes in a mouse's position as a result of reflected light is not without its problems.

For example, if the mouse is placed on certain surfaces, it may be difficult to determine if the mouse is moving. These problematic surfaces may include surfaces where the surface is relatively monochromatic, as such surfaces reflect light fairly uniformly and thus provide few changes in reflectance. Examples include surfaces that are substantially all white or all black with few or no contrasting colors. These problematic surfaces also may include surfaces with glass placed over them, such as desktops with protective glass overlays, where the angle of reflection may be skewed such that the image sensor in the mouse cannot detect the reflected light accurately. Accordingly, methods and apparatuses are needed that overcome problems associated with conventional approaches.

The Two Sides to Apple's Invention

Other embodiments may improve a mouse's performance on these problematic surfaces by emanating a light onto a surface on which the mouse is operating, capturing a reflection of the emanated light with an image sensor, determining optical properties of the surface based upon the captured reflection, and dynamically modifying the programming of the mouse based upon the determined optical properties of the surface.

The Magic Mouse as a Scanner

In addition to providing the capability to dynamically modify the programming of a mouse, some embodiments of the mouse may be capable of being used to scan images and display them on its housing because of the inclusion of a chromatic sensor. That is, the mouse with the chromatic sensor may be used as a handheld scanner, thereby allowing the user to scan and view images without using a computer to view the images. 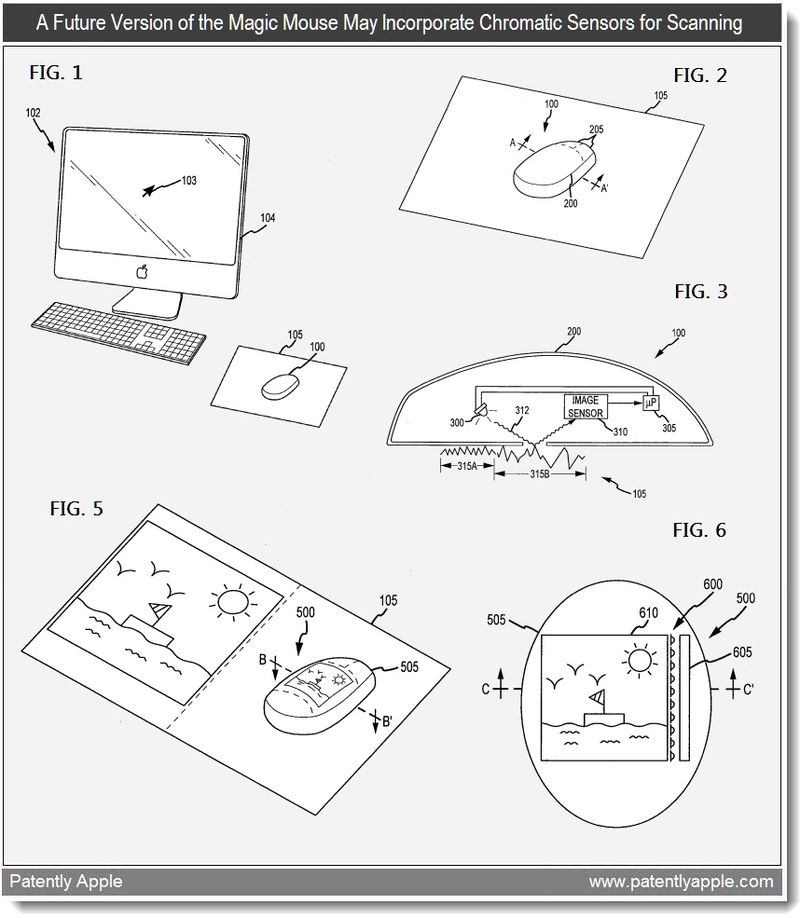 I would really like to be able to use the Magic Mouse on shiny surfaces. I have a clear - and shiny - blotter on my desk. I love using it to display photographs.

But my mouse does not work on this surface - which is a bit frustrating.

The scanner feature is truly the wave of the future. It like a great way to boost productivity.