Apple seems to be onto something new of late. They've been exploring the implementation of the smart port into future hardware. It will eliminate the current printed port icons that are on hardware today, such as for Firewire or Thunderbolt in favor of introducing "invisible-like" icons that are created by using micro-perforation techniques. The reason for doing this serves two purposes. The first is to once again refine Apple's hardware aesthetics and the second is to add the ability to introduce active or morphing port icons. These new morphing icons would be able to communicate both the location of a port and/or any danger associated with it.

Apple's R&D teams are conducting some fascinating research into the development of smart ports. Their teams are driven by Apple's fanatical reputation for original device detailing and elite aesthetics. You can tell when a project has been given the green light at Apple by the number of patents that begin to roll out over short periods of time.

In respect to smart ports, we began to see this research surface in a January patent that we covered under "Apple Dreams up a New User Friendly Connector System." In that report we covered Apple's exploration into simplified connectivity via technologies such as magnetic field sensing, LED sensing, audible indicators, vibrations via haptics and more.

Then in February a secondary patent surfaced discussing smart ports and we covered it under our report titled "Apple Talks up Smart Bezels + Live & Reconfigurable MacBooks." In that report we learned more about RFID tags and the use of micro-perforations relating to the reconfigurable metallic MacBook surface which could morph from a keyboard to gamepad. These micro-perforations were further discussed in a patent that we covered just last week under the title "Apple Considers Adding Invisible iTune Controls to MacBook Lid." And so leading up to today's patent there's been a lot of ground work covered by Apple's various engineering teams that demonstrate that this project is now gathering momentum at Apple.

Hardware that Monitors Your Eye Movement

In today's patent we begin with Apple pointing to a future desktop or notebook being able to assist a user in finding the right port to insert a cable into by simply monitoring their eyes. This was first described in Apple's January patent covering a friendly connector system which uses a tiny built-in camera in the hardware to monitor the user's eyes and movements. This works in conjunction with the use of a proximity sensor that could sense when a user's hands are proximal to a port.

In fact, the patent even goes beyond sensing just hand movement and crosses into territory that discusses that Apple is working on sensors that could actually detect when "human skin" is approaching the port section of your future hardware. Hmm, these sensors are getting a little too smart and beginning to creep-me-out – Yikes!

The use of RFID tag technology is obviously a key technology in this project, as Apple once again discusses it in this patent regarding the smart port. Additionally, the patent discusses the use of micro electromechanical systems (MEMS) accelerometers that could be used to measure the movement of a cable in one or more axes, including tilt and rotation. Furthermore, Apple is exploring the use of vibration detectors, a magnetic compass and/ or a gyroscope, all in an effort to better interpret the user's movement when nearing a port in order to provide assistance in connecting or disconnecting a cable. 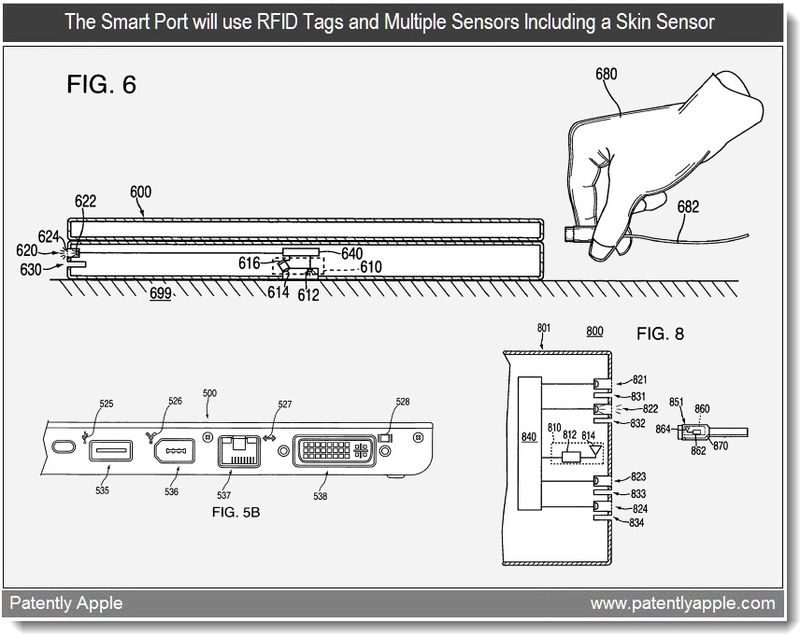 In another embodiment, according to Apple's patent, an accessory could broadcast an identification code that could indicate what type of port it could connect to. When the accessory comes within range of an electronic device, a proximity sensor could receive this code and determine that the user is attempting to connect the accessory. The identification code can be communicated using, for example, a Radio Frequency Identification (RFID) system or any other wireless communications system.

In response to determining that a port event is occurring, one or more icons could be selectively adjusted. For example, when a user is attempting to connect or disconnect an accessory to or from an electronic device, an icon could be adjusted to draw the user's attention to the appropriate port for the accessory. This adjustment could assist the user in locating a port and thereby save the user time.

This segment of the patent is truly the heart of this particular patent. Just as with Apple's reconfigurable MacBook patent, Apple is considering the use of micro-perforation in hardware to conceal port icons until they're required to be seen by the user. When not in use, there are no pre-printed icons to be found. Why do this? Well one of the reasons, according to Apple, is that icons could now indicate status going well beyond the statically printed icon. So now it's not just the smart port but the smart icons that will accompany this system.

In the combination patent graphic below, you'll see a series of possible icons that could be lit by LEDs. Then at the bottom of that graphic you'll notice that there are three distinct examples of how a standard icon could morph. The icon will morph into a new configuration by adding an extension of itself so as to communicate something new to the user, be it an activity or danger that they should be aware of. 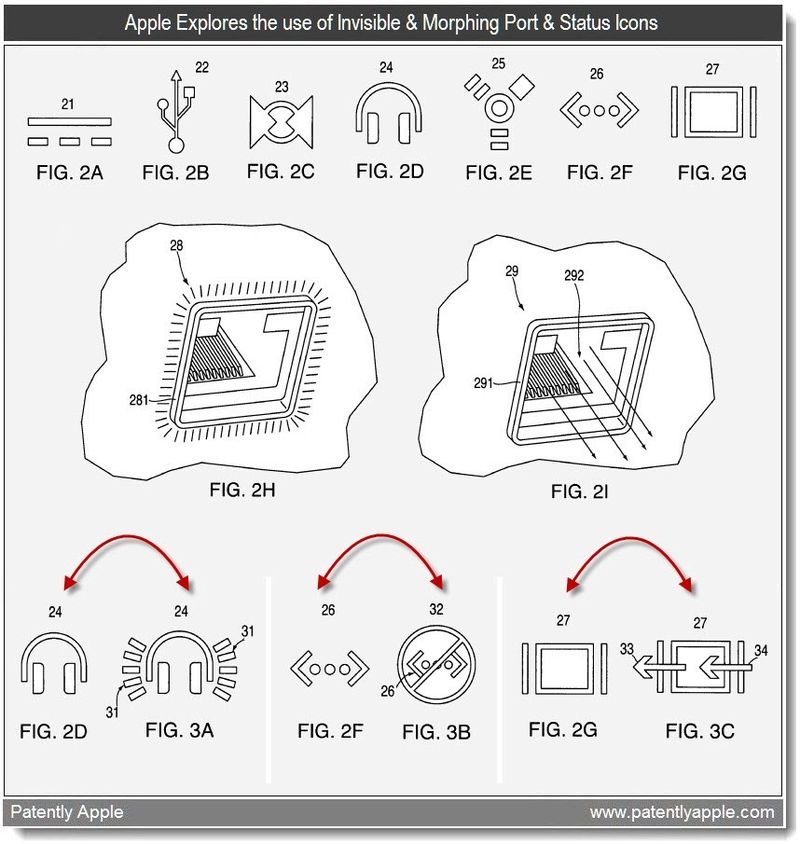 Apple credits Duncan Kerr, Nicolas King, Peter Mahowald and Derek DiCarlo as the inventors of this patent. Other patent reports with related subject matter: One, Two.

New Cooling Fan: For hardware techies, there's a patent out today regarding their centrifugal blower with non-uniform blade spacing. The technical specs of the patent could be found under patent 20110052385. The Graphic appears to be very close to the fan found in iFixit's teardown of the new MacBook Air. Apple's patent claim 11 states that the fan is associated with a laptop. Technically this would be a patent fulfilled. 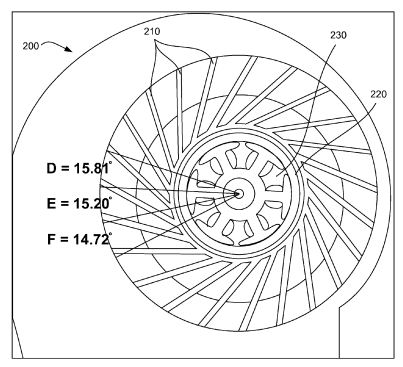 Security Patent: For security buffs, there are three new patents to explore. In our February patent report covering Apple's future Cloud Based Security Box, we also covered a secondary security patent titled "Sponge and Hash Functions using a Rubik's Cube Puzzle Process." Today, Apple is shown to researching yet differing processes under patents 20110055581, 20110055582 and 20110055576 which cover a Domino Game Process, a Painting Technique Process and Heap Modeling Process. That should keep the hackers busy for a while.

For information on any of the patents mentioned above, simply feed the patent numbers into this search engine.