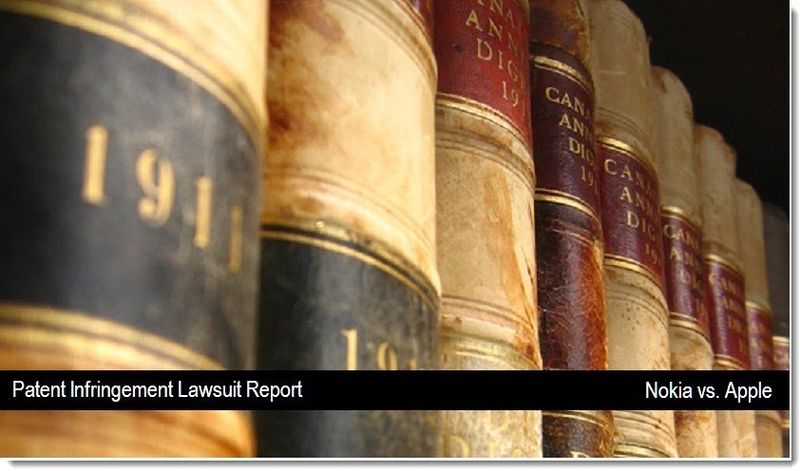 Nokia is seeking a Motion to Compel Infineon to produce documents relating to their baseband processor used by Apple's iPhone to prove that Apple is in fact infringing on Nokia's core ten patents known as the "Essential Patents." The case reads like a spy novel with many twists and turns. The complication in this case revolves around Intel's acquisition of Infineon's wireless division and who is responsible for coughing up these crucial documents to assist Nokia's infringement case against Apple. It seems everyone is pointing at everyone else to run out the clock. Nokia is determined to get their hands on these documents that may or may not win their case. It's a nail bitter, that's for sure.

The court document begins with the following: "On March 18, 2011, Nokia will move the court to compel the production of documents from third party Infineon Technologies North America Corporation. The motion is made on the grounds that that documents Nokia seeks are important to Nokia's proof of Apple's infringement of ten Nokia patents, and can be obtained only from Infineon. Infineon's claim that it doesn't have control over the responsive documents is meritless, and its compliance with this court's subpoena is not excused by the acquisition of a portion of its wireless group by Intel Corporation. Nokia accordingly requests that this Court order Infineon to produce documents responsive to Request numbers 13-17 and 19-22 within a reasonable time frame (i.e. by March 25, 2011) pursuant to the subpoena issued by this court." 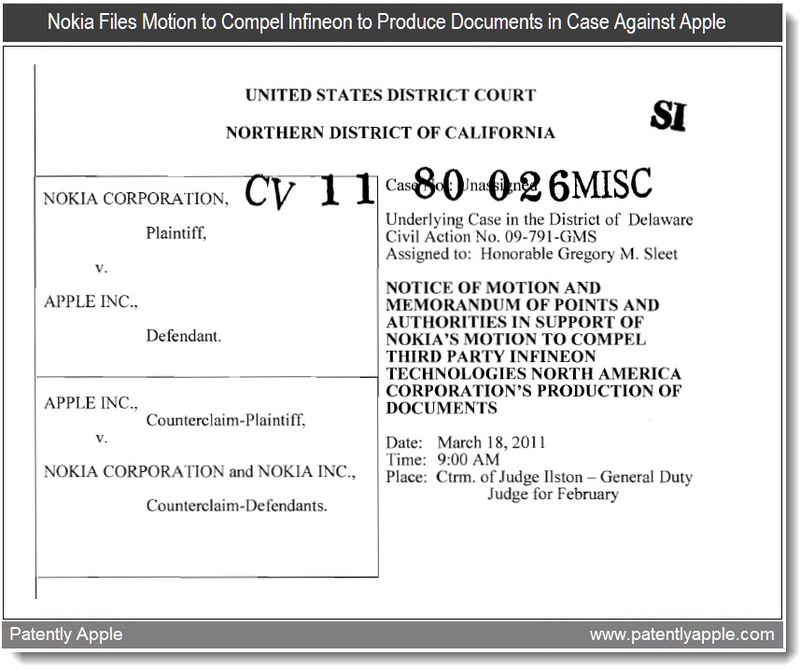 On October 22, 2009, Nokia instituted an action against Apple in the Delaware Court fro refusing to compensate Nokia for Apple's unauthorized use of ten of Nokia's patents declared essential to the GSM, UMTS, and IEEE 802.11 wireless communication standards.

Essential patents are patents that are necessarily infringed by the practice of the standard to which they have been declared essential. Because of the use of standards is desirable and often mandated, essential patents must be licensed on fair, reasonable, and non-discriminatory ("FRAND) terms and conditions.

Nokia offered to license the ten essential patents to Apple on such terms, but Apple refused to pay. The Delaware Action thus seeks, among other relief, FRAND compensation for Apple's infringement of Nokia's essential patents.

Nokia claims that certain Infineon chips contained within certain Apple products practice the standards to which Nokia's patents in suit were declared essential, thereby infringing those patents. Accordingly, on December 20, 2010, Nokia served a subpoena on Infineon that was issued from this Court, ordering Infineon to produce documents and provide deposition testimony related to the Infineon chips alleged to infringe Nokia's essential patents. Infineon made its written objections and response by letter dated January 5, 2011.

Infineon objected the subpoena as overly broad and unduly burdensome to the extent it seeks documents that are irrelevant to a claim of defense of any party and/or not reasonably calculated to lead to discovery of admissible evidence. There were many other objections along these lines but one of the key objections read as follows:

Nokia sought and obtained a second subpoena to Infineon, this time for the production of technical schematics and circuit diagrams. Infineon was willing to produce the requested materials in exchange for Nokia not demanding the production of relevant source code that it sought. There seemed to be an agreement but Nokia discovered that Infineon's documents/productions didn't include documents describing in detail the relationship between the various microcontrollers on the transceivers and the various voltage controlled oscillators in the transceivers although it was requested. When Infineon was asked where that information was, their response was that they couldn't find the requested documents.

Surprisingly, at a later evidentiary hearing, Dr. Klepser, Infineon's corporate witness called by Apple, testified as to certain aspects of the chip's functionality, despite the fact that he was unable to do so at his July 2, 2010 deposition. Dr. Klepser testified that there were documents in Infineon's possession that would either support or refute his testimony. Yet these documents were never produced to Nokia during the course of their investigation.

Complications Due to Intel Acquisition

According to the court document, the counsel for Nokia and Infineon conferred by telephone on January 19, 2011. Infineon indicated at that time that ownership of Infineon AG's wireless group was about to be transferred to Intel, and that following that transfer, current counsel for Infineon may or may not continue to act as legal counsel for the transferred group.

They later learned that the Infineon AG's wireless group had transferred to Intel as of January 31, 2011, and that the new wireless company would be called Intel Mobile Communications ("IMC"). On February 4, 2011, Nokia advised Infineon that they planned on issuing another subpoena to Intel Corporation.

The documents that Nokia seeks to compel are directly relevant to Nokia's Infringement analysis with respect to its essential patents asserted in this action. Nokia is entitled to investigate both whether the accused products comply with standards to which Nokia's patents are declared essential, and how the accused products do so. Broadly speaking, Nokia's essential patents relate to three areas of cellular technology:

The bulk of these functions is performed in a part of the phone called the baseband processor. Apple implements these core aspects of cellular technology by purchasing off-the-shelf baseband processors from Infineon.

Both the law and the facts undermined Infineon's claim that it didn't have possession, custody or control of the subpoenaed documents prior to Intel's acquisition of Infineon's wireless group. The word "control" is broadly construed in application. Nokia referred to Addamax Corp. v. Open Software Foundation Inc. that basically allows the court to deny a subsidiary to deny control for purposes of discovery by an opposing party. Moreover, Infineon's production of documents responsive to the ITC and Wisconsin subpoenas demonstrates that Infineon had control over the materials.

Infineon's claim that in view of Intel's acquisition of their wireless group that they can't be compelled to produce the relevant documents is without merit.

An order requiring Infineon to produce those documents in its possession, custody or control will ensure that Nokia obtains what it needs to prove Apple's infringement of Nokia's essential patents. Nokia will seek the same order from Intel should it resist production of the documents Nokia has subpoenaed.

The case was filed in the United States California Northern District Court. The presiding Judge in this case is noted as being Judge Illston. The Court date is set for March 18, 2011. The court documents showed up in our court source this morning. The document appears to have been filed sometime on Wednesday.

It should be noted that while Nokia hones in on the Infineon baseband processor documents, Apple is rumored to be thinking of a switch to Qualcomm's baseband chipsets. You have to wonder what may have motivated such a move, if it proves to be true. Update March 12, 2011: A court document filed this week presents a "Joint Stipulation and Order to Continue Hearing" of Nokia's motion to compel from March 25, 2011 to April 8, 2011 has been ordered by the court. With Infineon signing off on this document, it would appear that Infineon is cooperating fully to produce the missing documents that were disscussed in our report noted above. (Click graphic to enlarge. Once you see the graphic on a new page, click it again to enlarge.)

If you're interested in seeing the entire Nokia vs. Apple battlefield in an overview graphic, check out Florian Mueller's creation.

The United States International Trade Commission ruled on March 25, 2011, that Apple did not violate 5 Nokia Patents as was alledged in a filing on January 28, 2010. The five patents and respective claims that were not violated by Apple Inc are noted below:

Let's hope that the slopartist that is named Nokia will shrink fast. They are uncreative and have no idea what to do and are hoping they can sue their way back in business

Bryan: There are a lot of issues swirling around these infringement assertions and the motion to compel. First, it is a little odd that Nokia couldn't compel Apple to produce relevant documents related to implementation of the patented technology. I'm not sure if they tried, or what they got if they did try.

Anyway, in general, a chip manufacturer and the OEM can both be sued for infringement. The patent holder does not need to chose one over the other as both are jointly liable. It sometimes makes sense for patent holders to go after the "big dog" with the deep pocket, at least initially. However, the patent holder is not entitled to double dip for damages. They simply have the right to be made whole for the infringing activity.

As such, if an OEM is held liable and forced to pay damages for the infringement, the OEM may then seek compensation or reimbursement from the chip manufacturer via indemnification. There are other factors that may come in to play, such as implied licenses from the manufacturer to the OEM that protect the OEM. Again, most of these issues are between the OEM and manufacturer, and do not limit the ability of the patent holder to pick one or both to sue.

Lastly, we shouldn't forget that Nokia and Apple are battling it out in other infringement suits. Focusing on Apple rather than Infineon here may be part of Nokia's aggregate strategy to flex its patent muscle (e.g., force settlement or licensing across multiple suits and patent portfolios).

Sorry if this is a bit scattered but lengthy papers could be written on each of these subissues and how they are playing out in this case. As is the case with most patent infringement suits, business and leverage decisions are often more important than legal ones.

Question: If a chip manufacture is making a chip or chip sets that they sell to multiple OEM's for use in products, why are the chip manufactures not being sued for patent infringement? It's not the OEM that is having them design the chip, they are just using off the shelf chips made buy someone else.

Although off-topic a bit - I'd personally like to see Apple slam HTC & Motorola in the courts.

Especially, HTC. Why? They actually showcase/allude to HTC phones having the same functionality as the iPhone in their commercials. Which to me is very misleading to the consumers. Surprised the FTC allows them to do this.