Earlier this month, Apple filed for a new MacBook Pro trademark. It was busy for us this month and it just seemed to be a run of the mill trademark update not worth mentioning. Then CNET's news surfaced this weekend about the possibility that the updated MacBook's could be adopting Light Peak. So back to the trademark filing we went to see if there were any clues that could support that notion. Lo and behold, there was. While I hate grabbing at straws, there certainly is one feature listed that could fit the bill – if you know how to connect the dots.

Late Saturday, CNET revealed that a reliable source told them that "an announcement from Apple is expected soon about a new high-speed connection technology." The report hinted that this could mean that the next generation Light Peak could be the technology referred to and headed for the upgrade coming to the MacBook Pro, supposedly this week.

Patently Apple first revealed back in December 2010 that an Apple patent confirmed that a future iteration of MagSafe could in fact include Fiber Optics. The patent presented us with information pointing to Light Peak or Light-Peak-like technology in the works for the MacBook Pro.

The CNET report combined with the known patent information is now further supported by Apple's latest MacBook Pro trademark filing that lists "power converters" separately from "power adapters" as one of the new technologies that Apple is seeking protection for as noted below:

Because of Apple's patent, we're able to reasonably understand that this simple listing of "power converters" in Apple's trademark filing could actually have a real context that we're hoping will translate into some exciting news this week.  Then again, it could be overreaching. Time will tell soon enough - but it sure looks promising. 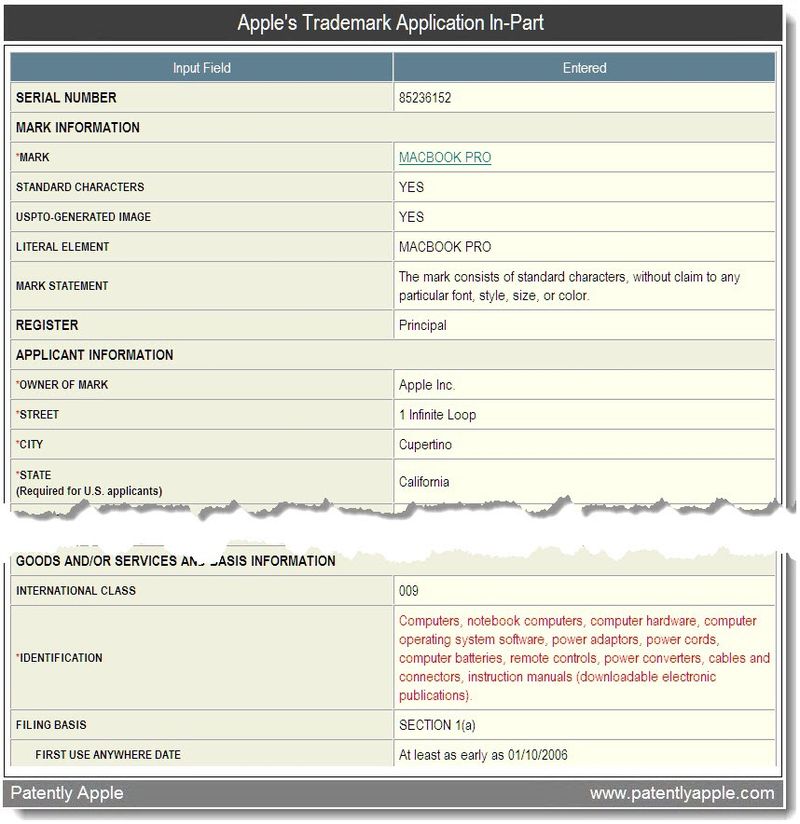 Update February 23, 2011: Engadget reports today that Light Peak or another kind of High-Speed I/O is indeed coming to the MacBook Pro as the updated trademark suggested. Also see the MacRumors report. Interestingly Apple may have chosen to kick start this I/O using DisplayPort. Whether this eventually extends to MagSafe at a later date or is included with this updated MacBook Pro is still unknown. The point is that one implementation doesn't necessarily contradict the other over time.

I've been bemoaning the lack of a nice Apple-provided docking station for their laptops for some time now. I can see where they're going with this. One high bandwidth serial connector with the ports in a power brick.

[The patent isn'at about a laptop docking station to begin with. But I hear what you're saying, Peter. JP]

Well played! I hope you're right!

Would this mean that the power brick would be a light peak 'hub'?

very interesting.. thanks for digging this up!

it would be great to have one port versatile enough to handle flash drives all the way up to display connections. simpler, AND better.. the apple way!

it would be awesome if the upcoming MBPs could sync, light peak to light peak, with the upcoming ipads (as has been suggested by rumors of an additional port from the leaked ipad2 case designs). the magsafe is so much more satisfying to use than the 30 pin.

I feel like magsafe like connectors for lightpeak would be extremely important... If you have 5 optical cables in a straight line, you could let the magnets tell you how to align them. If you turn it one way, the port would repel the cable letting you know that you're putting it in the wrong way...

I can't wait until those macbook pros are unveiled next week :)

MagSafe would be an interesting option to be the 30 pin dock connector replacement - the magnet would help alignment, there'd be less issues of tension on it compared to the 30 pin - easier to pull on and off. It's their thing, so they keep control of it (in comparison to a Display Port or USB hybrid).

It'll be interesting to know Apple's selling points in regard to Light Peak. It could certainly make other Macs, iPads, iPhones seem slow by comparison (ala MacBook Air's SSD option).

Can i assume this has to do with intel's new chip that is stated to transmit data at 50 billion bits per second (50Gbps)? All smiles for us consumers.