Yesterday we presented you with two of Apple's most detailed patent applications covering Apple's extraordinary research into the notion of live and reconfigurable notebooks. Those patents detailed various scenarios pertaining to a "keyboard-less" notebook in addition to detailing a smart bezel, using hand-wave controls and much more. In today's patent report we cover Apple's third and final installment on this subject matter which pushes the envelope even further this time around by introducing us to acoustic commands. Acoustic commands use unique noise fingerprints of tapping combinations, scratches and/or swirling-motions to control device functionality.

Apple's patent covers notebook and tablet housings being integrated with acoustic transducers that could operate as an input. For example, in one embodiment, the electronic device includes a housing and one or more acoustic transducers positioned within the housing each operative to generate an electrical signal in response to detecting a sound resulting from an impact with the housing.

Apple's patent discusses how acoustic transducers could be configured to accept acoustic commands that consist of tapping, scratching and other interactions with a surface of the housing. The transducer generates electrical signals in response to the interactions. The electrical signals may be sent to a processor that interprets them as input to an iPad or MacBook Pro-like device. The interpretation maybe based on the type of input, nature of the input, the location of the contact on the housing, the amplitude of input, as well as other various other factors. For example, a scratch may be interpreted differently from a tap, and so forth. Additionally, a tap on the housing near an output or input device may actuate the device whereas a tap on another surface of the housing may be interpreted as a keystroke.

Moreover, a vocabulary of acoustic commands may be provided for the purpose of interpreting the electronic signals. As used herein, vocabulary may refer to recognizing input patterns as indicating a particular function. For example, in one embodiment, the vocabulary may allow for the device to interpret a pattern or series of taps and or scratches, etc., and/or other acoustic inputs as indicating particular functions, such as opening or closing an application, adjusting volume, etc., for example. The electronic device may provide an output or feedback upon receiving the input. In some contexts, however, interactions with the surface of the housing may not be interpreted as input to the electronic device. For example, if the device determines that the contact is incidental, accidental or not recognized as input (i.e., not part of the vocabulary), no feedback or output may be provided.

The following video was created by Chris Harrison - a fourth year Ph.D. student at Carnegie Mellon University. I came across one of his great "Masters Projects" presentations on "Scratch Input" after conversing with Chris. Chris makes the benefits of using acoustic based technology come to life on his MacBook at the 3:18 mark of the video below. Many of the idea presented in Apple's patent are covered here in one way or another to make it all come to life. Of course this is covering raw research, so put that into context.

Apple's patent FIG. 2A illustrates a possible future notebook made of aluminum, titanium, steel or any suitable metal or metal alloy and using an LED or OLED display. Alternative housings could be made of plastic, glass, ceramic, composites or any other suitable material. 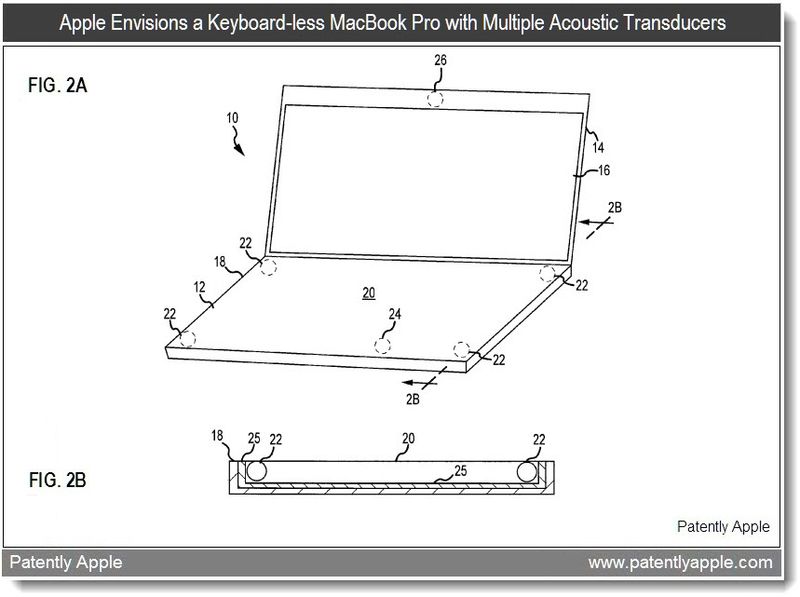 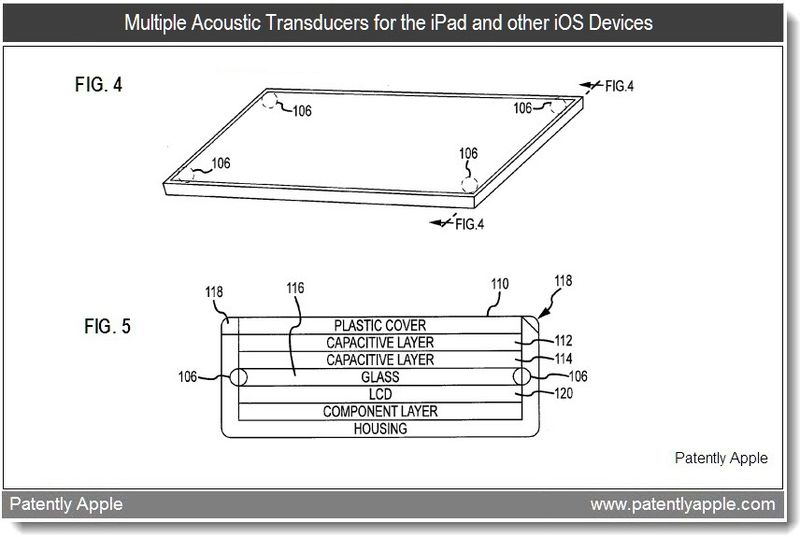 Apple's patent FIG. 4 clearly illustrates that acoustic transducers will also apply to future tablet computers including the iPhone and iPod touch as examples.

Others are working on this as well as noted here:

Many other Universities are working on this including The University of Cambridge UK. Jens Christensen is one such Ph. D student working on such research.

Here's a PDF on some earlier related type of work...

Why wasn't this thought of before? :)