The US Patent and Trademark Office officially published a series of ten newly granted patents for Apple Inc. today. The notables within this group includes one that relates to Apple's Automator workflow tool, another for Final Cut Pro's color correction tool and yet another for a new paint brush feature that builds on the case that Apple has their eye on a new graphics app. And finally, Apple has won their first patent for Ping – their social network for music service – only five months after its initial release. Now that was a surprise and chalks up another patent fulfilled.

Apple has been granted their first patent relating to their new Ping – social network for music service. The patent that is obscurely titled "Network-assisted remote media listening" was originally filed in mid 2008 or more than two years prior to introducing their Ping service. 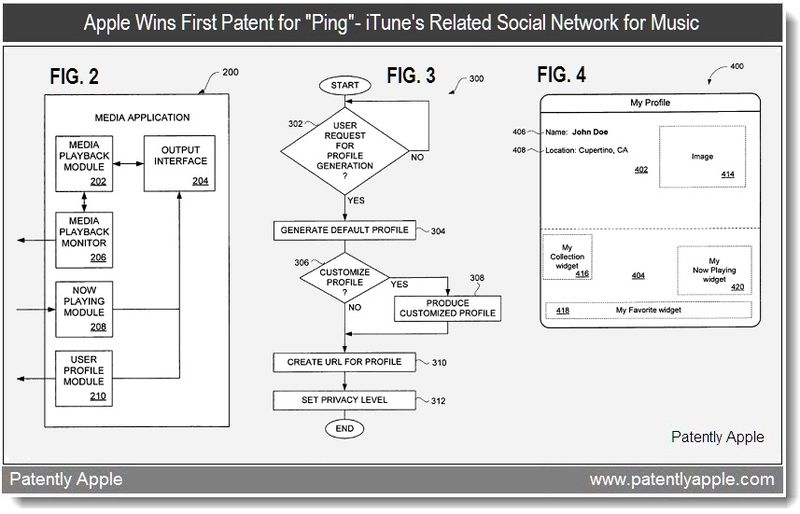 Apple's patent states that "apart from media playback/management applications or media players, social networking websites permit users to establish their own virtual space and associate with friends. The virtual space for a particular user can be customized by the user to provide text, audio, and/or images (photos, video). Visitors, sometimes only authorized users (e.g., friends), can access the virtual spaces. Examples of social networking websites that provide spaces include MySpace, Facebook, Friendster and various others.

Apple delivered their solution to the problem outlined above by launching "Ping" in concert with iTunes 10 on September 1, 2010. Apple credits Catherine Wormington, Camille Hearst and Steve Gedikian as the inventors of granted patent 7,886,072.

Apple has been hinting at a paint program for more than a year now. We first learned of new fast and slow brush stroke movements back in a January 2010 patent which also detailed other tilting mouse gestures for use on a desktop. Then just last week we learned about a new artistic stylus for graphic artists and so this latest granted patent builds a stronger case that some kind of a graphics app is in the works for iLife and/or for Apple's Pro sector. What's clear is that the proposed graphics app will likely be able to work on your desktop as well as on the fly with an iOS device like the iPad. 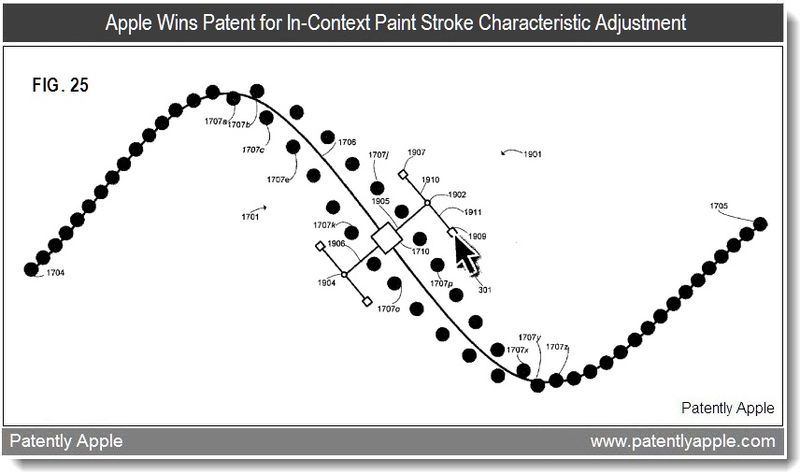 Background: Painters refer to the mark caused by the movement of a physical paint brush over a medium, such as a canvas, as a paint stroke or brush stroke. Similarly, graphics designers could use computer applications that could create virtual paint strokes, defined by the movement of a virtual paint brush (or brush icon) along a path on a display. Graphic designers prefer using these virtual paint strokes instead of using straight lines, curves or other templated shapes, due to the visually appealing non-uniformity of the region or regions that can be defined by a single paint stroke.

Due to this non-uniformity, however, alteration of a paint stroke rendered on a display is oftentimes difficult, onerous and counterintuitive, and is always performed using a process that is non-analogous to the alternation of a physical paint stroke. For example, in many typical computer graphics applications, characteristics of a rendered paint stroke must be adjusted by selecting options on various nested menus, which may be distally disposed across the virtual desktop from the paint stroke itself.

For iOS Devices: Using a touch screen device, a single paint stroke is created when the user touches the touch screen device (a finger down event), moves the finger across the screen (a finger drag event), and removes the finger from the screen (a finger up event). Although there are some paint programs available for the iPad, they're not from Apple. This patent would suggest that Apple could be considering their own Paint styled app. 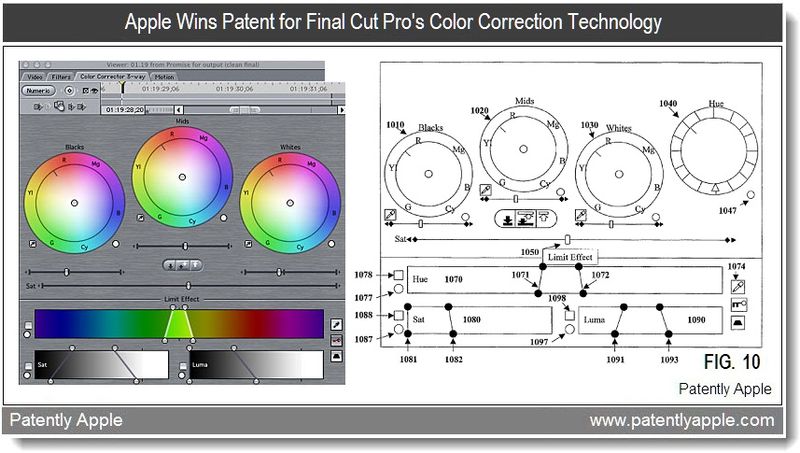 Initial Patent Claim: Apple's initial patent claims states that the patent is about "a computer readable medium storing a computer program for performing color correction for an image comprising a plurality of pixels, each of the plurality of pixels having a plurality of color component values, wherein a color space is defined by a range of values for each color component, the computer program executable by at least one processor, the computer program providing a graphical user interface (GUI), the GUI comprising: a set of GUI objects for identifying a three-dimensional region to key within the color space; and a color pad tool for (i) receiving an input specifying movement of the keyed three-dimensional region within the color space and (ii) performing color correction on the image to adjust color component values of any pixel that has color component values that fall within the keyed region based on said movement."

While on the topic of video processing, Apple has also been granted a patent titled "Decoding interdependent frames of a video for display."

The Patent's Abstract: A module may provide codec-independent services including determining frame display order, frame dependency sets, and queuing the dependency frames in advance so as to enable display of a video. The module enables a video to be played forwards or backwards at a variety of playback speeds from any position within the video. In one implementation, a device communicatively coupled to a plurality of decoders accesses a video that includes a plurality of frames. One or more of the frames are decodable by one or more of the communicatively coupled decoders. The device identifies a frame in the video that is to be displayed, and determines a plurality of dependency frames in the video upon which decoding of the frame to be displayed depends. The device provides an indication that one or more associated dependency frames are to be decoded.

Apple has won yet another "Invisible, light-transmissive display system" related patent. They were awarded a related patent on February first. They've also won another design patent for their Magsafe connector and a rather important iPhone related patent covering the field of telecommunications, and more particularly to dynamically selecting mobile carriers. 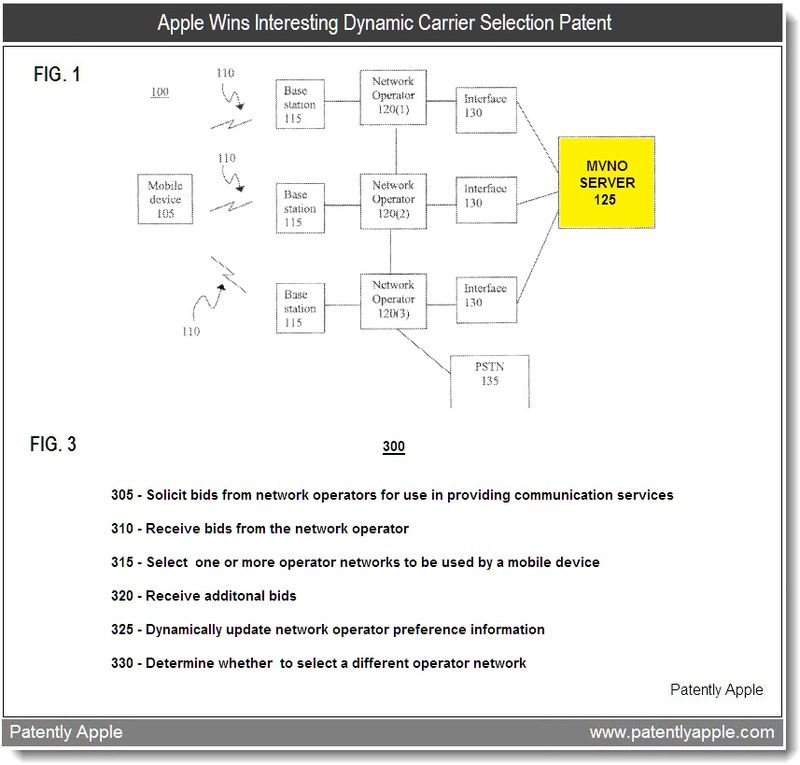 It's an interesting read but you have to put it into proper context. Firstly, Apple isn't seen in this patent as the "MVNO" as some would hope for. Secondly, the "bidding" system goes out to a series of MVNO's which would confirm that Apple wasn't planning on being the MVNO. Thirdly, the patent was filed in 2006 - well before any iPhone announcement was made. So this patent may simply have been Apple's backup plan if their talks with Cingular would have failed.

And Finally, Apple has won a patent for Automator which comes with OS X as a workflow automation program tool. 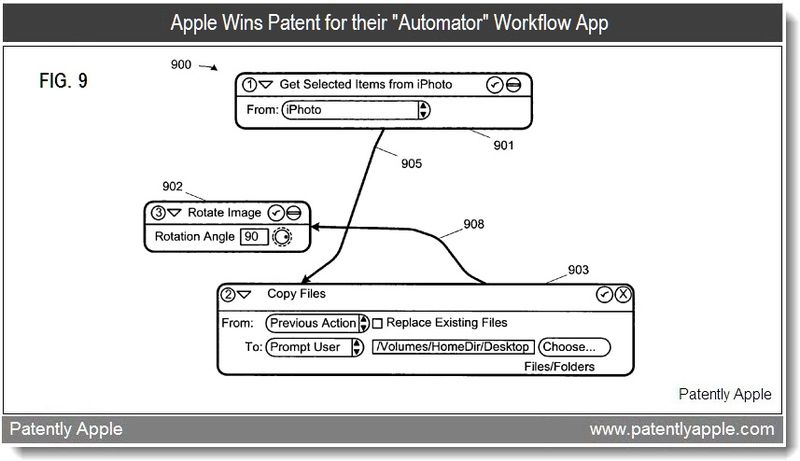