On February 17, 2011, the US Patent & Trademark Office published a patent application from Apple that reveals the next chapters for both their iPad and MacBook portable devices. Apple first discussed future plans regarding a smart bezel for their iPad and iPod touch a year ago while hinting at new hovering capabilities just last week. The idea is to give Apple's iPad bezel easy yet invisible controls. In today's patent application, Apple really spells out how the smart bezel may not require a Home Button and added controls like volume will simply require a swipe of your finger. If that wasn't enough, Apple kicks everything up a notch by talking about a Live and Reconfigurable touch interface for future MacBooks. This has a lot of potential if Apple's haptic technology advances accordingly. It's the device every OEM on the planet is trying to master and it sure looks like Apple is getting a whole lot closer than most. Go Apple!

Another embodiment takes the form of an electronic device housing having a wall with at least one exposed surface and an interior surface. One or more sensors are positioned within the housing and proximate to the wall's interior surface in order to sense user interactions with the exposed surface and generate electrical signals based on the interactions. A controller is communicatively coupled to the one or more sensors and may interpret the electrical signals as an electronic device input. The controller may also generate an output signal. Additionally, at least one output device is positioned within the housing and communicatively coupled to the controller to receive the output signal. In response to receiving the output signal, the at least one output device provides output via the housing. In Apple's patent FIG. 1 we see a simplified block diagram of a housing I/O interface (200) having a housing wall (202). As shown, the housing wall defines an outer surface (204), which may help form an exterior portion of an electronic device, and an inner surface (206), which may help form an interior portion of the electronic device.

In Apple's patent FIG. 2 we see an illustration of a simplified block diagram of an electronic device implementing the housing I/O interface of FIG. 1. The information obtained from the one or more sensors of the input element may be used to perform actions in the electronic device (214). Thus, the sensor and housing may be referred to as a housing user interface or housing input device.

As should be appreciated, user actions such as approaching (proximity), touching, tapping, holding, squeezing relative to the housing may be used by the electronic device to perform actions. Additionally, when combined together, these user actions can provide different levels of user input. For example, proximity may initiate a first user input, touching may initiate a second user input, and squeezing may initiate a third user input. Of course, sensor inputs may be combined to form a single input (e.g., proximity+touch=first signal, touch+squeeze=second signal, holding+orientation=third signal, etc.).

According to Apple's patent, the housing user interface or I/O interface may be implemented in a variety of electronic devices including, but not limited to, portable computing devices, cell phones, televisions, personal computers, smart phones, personal digital assistants, media players, appliances such as refrigerators, microwave ovens, etc. and any other suitable electronic device. As such, although the description included herein may include some specific embodiments and may be related to particular functions, it should be understood that the housing I/O interface may be implemented in a wide variety of devices and may perform a variety of functions beyond the embodiments specifically described herein.

Apple's admission that this technology will extend to the other household appliances and/or applications will be better understood in the coming weeks ahead in one of our special reports.

A Smart iPad Bezel with No Home Button Envisioned

In Apple's patent FIG. 12A below we see an illustrated tablet and/or future iPad, with a housing/bezel (152) that contains a number of sensors/actuators (154). In particular, for example, in one embodiment the housing may include touch sensors, pressure sensors, light emitters, and/or haptic actuators, etc. represented by the sensors/actuators and accelerometers. 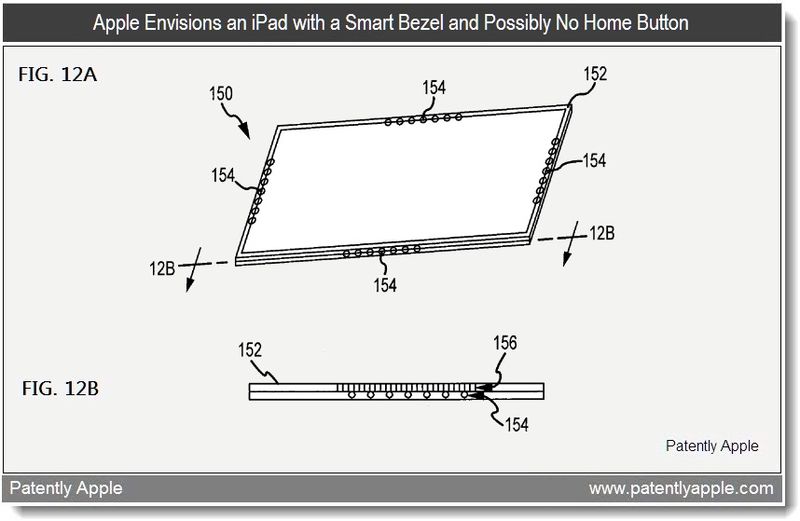 Touch the iPad Bezel to Adjust Speakers or Display Brightness

In other embodiments, the volume may be adjusted by determining a movement upward or downward on the surface and adjusting the volume accordingly, i.e., adjusting up for a sensed upward movement.

Double Tap the Bezel to Turn the iPad On or Off

In January, BGR reported that they had received word that a future iPad would drop the Home Button. Well, this patent seems to support that position. According to the patent, the sensed input may be used to unlock or awake the tablet from a sleep mode. For example, if the tablet is locked or asleep, upon determining a user handling the tablet through sensing touch or pressure being applied to particular parts of the housing and/or movement of the tablet, an application or start-up routine may be launched that requires certain input to unlock or otherwise bring the tablet to a fully functional state. The patent also states a double tap to the lower edge of the tablet's housing could be used to turn it on and/or off. 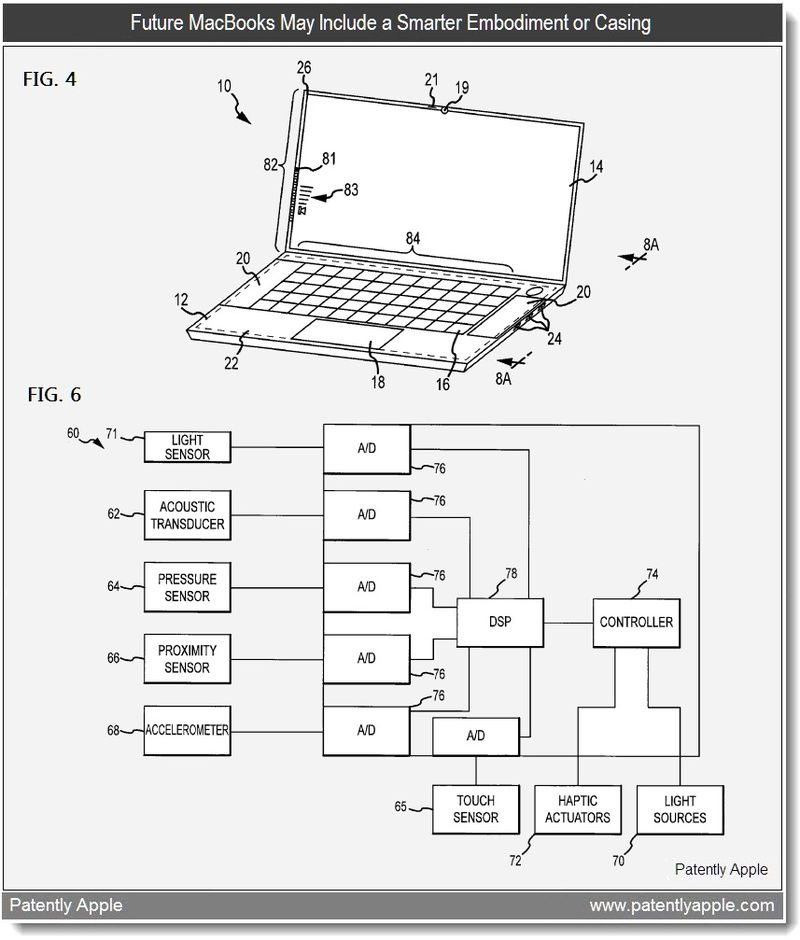 As shown in Apple's patent FIG. 8A below, when there's no object detected as being near the MacBook Ports 24, there is no output/feedback provided to a user and the surface of the housing appears to be a non-functional wall, as there are no breaks in the housing surface for input or output devices.

In response to sensing the user input, i.e., an object approaching the ports, the proximity sensors (66) may generate a signal. The strength of the signal generated by the sensor may be used to determine the distance of an object from the ports. Upon sensing an object near the ports, the processor may generate an output signal to light sources (not shown) so that icons (97) may be illuminated or may otherwise appear on a top surface of the housing to indicate the location and types of ports that are located on the side of the housing, as shown in FIG. 8B.

Turning to FIGS. 9A and 9B, an alternative embodiment is illustrated wherein a USB connector (112) may be configured to identify itself to the system as it approaches a port or a bank of ports. Specifically, in one embodiment, the connector may be equipped with a radio frequency identification ("RFID") tag 114. The RFID tag may be active or passive. In MacBook may poll for RF input, such as input received from the RFID tag on the connector. 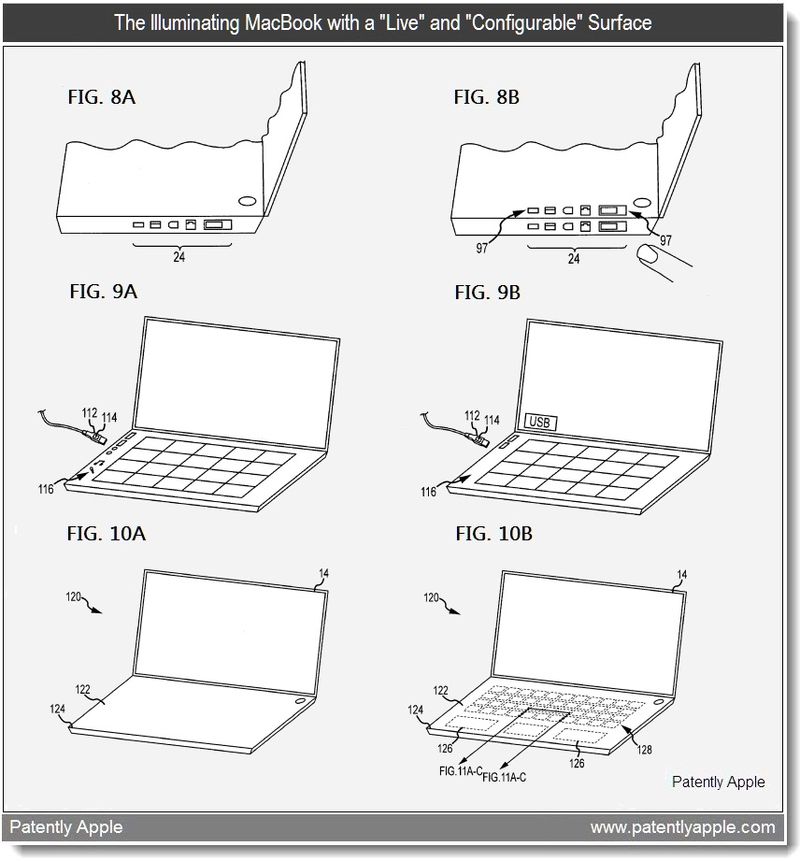 Apple states that the name of the port may be provided on the surface in conjunction with the port symbol or instead of the symbols.

In yet another embodiment, the icons may be controlled by a "set up assistant" software or other software related setting up the computer or connecting a device. The set up assistant software may be used to guide a user when setting up a computer for the first time. For example, when the computer is first started up (i.e., turned on for the first time by a user), the set up assistant may ask for a mouse and/or keyboard to be connected and may illuminate the appropriate port icons, such as the USB icons, for example.

Apple Introduces us to the "Live" MacBookSurface

Apple Introduces us to the "Configurable" MacBook Surface

In another example, the user may move the controls for volume to a desired location on the surface. In another embodiment, the application may simulate surface 122 on the display 14. The simulated surface may provide a map of the current surface configuration and the user may manipulate the simulated surface to re-configure how input from the surface 122is interpreted by the MacBook.

Once the user has reconfigured surface 122, the configuration may be saved in memory of the MacBook. In another example, Apple points to an OLED based light source underneath the surface of the MacBook that would show a reconfigured image in a new location. In another example, an image on a main computer display may show a surface map with indication of where the new number pad is located on surface 122.

The good news is that Apple has been secretly working on this for years. Their research began, in fact, as far back as 2005/2006 timeframe.

And There's More to this Story

Also see Parts two and three of this Report which covers more details about the keyboard-less notebook in additon to providing you with information about all new hand-wave and acoustic based controls for future notebooks and/or tablets. And lastly, you'll also see a peek at a possible new LED based UI for an iPod that borrows from the principles of this patent e.g. using micro-perforations in the iPods embodiment. The new UI variable isn't that of the traditional Clickwheel, so check out part two for more on this.

The USPTO has published Apple's second patent regarding a magnetic connector with an optical signal path. We initially covered Apple's patent on December 2, 2010 in great detail. Today's patent add little.