When you think about the basic logic behind Apple's Magic TrackPad, you could reasonably envision touch controls going well beyond glass. This only makes sense as Apple gains experience with touch technologies on different substrates. In a second patent application published today, Apple discusses a new way of bringing touch to aluminum and other metals. There, new discoveries may very well lead to the development of truly next-generational forms of a MacBook or perhaps just added  magic to their MacBook Air. Considering that Apple also discusses introducing air-wave controls on Apple hardware, it might be the place to kick-start this little wonder of an idea. The Concept also extends to the iPod where we might even see a spiral-styled control UI surface amongst a series of new specialized hardware interfaces. While I think that Apple's new reconfigurable hardware concept sounds a little like their one time chameleon project, the fact remains that Apple now has the technological experience behind them to advance some of these great and wilder ideas. I think that Apple's TrackPad was only an experiment for what lies ahead. And it all sounds like a lot of fun to me.

The Entire Aluminum MacBook Surface as a Touch Device

Apple's patent states that while conventional housings for electronic devices may be manufactured using different types of plastics, an increasing number of housings are being implemented where the housing is manufactured, in whole or in part, using metal – such as Apple's MacBook Pro and or iPod touch. Conventional approaches have had difficulty sensing user interaction through metal, especially when the sensors are implemented using capacitive sensing technologies. In some embodiments, the difficulties associated with capacitive sensing may be overcome by forming the capacitive sensor using the housing as a first terminal of the capacitor, using another terminal located within the housing as a second terminal of the capacitor, and separating the first and second terminals to create a cavity or gap to be filled with dielectrics. For example in some embodiments, the dielectric may be air while in other embodiments the dielectric may be implemented as a material that offers additional structural support to the housing, such as a sponge.

Technically, Apple emphasizes that the invention could primarily apply to an iMac, MacBook, and iPod, an iPod touch, the iPad and iPhone. That in itself has a million spin off implications, right? It means that Apple could theoretically add touch features to the backside or metallic parts of the iPhone, iPad and iPod touch or even the face of their iMac. I'll leave that to your imaginations for now.

A Fresh Take on the Virtual Keyboard

Apple's patent FIG. 3 illustrates a MacBook where the keyboard 28 (shown in phantom) is formed in the metallic solid surface. To make that crystal clear, the patent states "the notebook computer may have a metallic solid continuous surface in place of a traditional keyboard." Patent FIG. 4A illustrates a top down view of a cross section of the keyboard (28) taken through the housing of the MacBook. 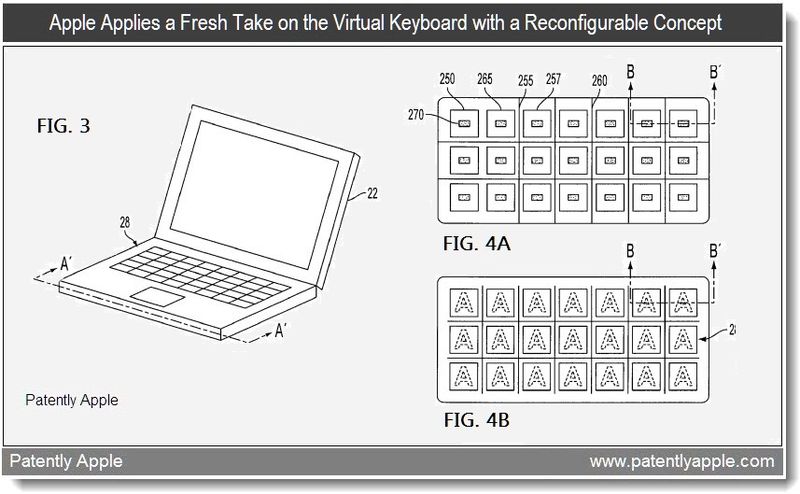 The printed circuit board may include one or more light emitting diodes (LEDs) (270) located adjacent to the terminals (250, 257, and/or 265). FIG. 4B illustrates a top down view of the keyboard that may be located on top of the view shown in FIG. 4A.

Okay, so what does all of this mean? Simply put, it means that the keys of the keyboard, according to Apple, may actually be integrated into the flat metallic surface of the housing using micro-perforations to define the edges of the keys and the letters associated with each key (both shown with dotted lines in FIG. 4B). In this manner, as the LEDs are illuminated the locations of the keys and the letters they represent become apparent to the user. Otherwise the keyboard is essentially invisible.

Why do that? As we pointed out in our earlier report this morning, the typing area of this new reconfigurable keyboard will be able to morph into other configurations such as a huge numeric keypad, gamepad or even an iTunes equalizer for example.

To make it fun for use with an equalizer, Apple is considering the use of a multi-colored LED. For example, in some embodiments, a single LED capable of emitting red, green, and blue (RGB) light separately or simultaneously may be positioned underneath each of the terminals. This way the equalizer would be able to display various colors for differing sounds (base, treble, highs, lows) and so forth.

It's a different take on the virtual keyboard because the MacBook Pro would be retaining a metallic surface that could provide a superior tactile feel over glass. In truth, this is perhaps better described as a reconfigurable keyboard than it is a classic virtual keyboard like is implemented on the iPad. Yet whatever terminology you decide to use, I think that the concept is solid. Apple recently discussed this virtual keyboard concept for the iMac in January.

Implications beyond the MacBook

According to Apple, FIG. 5A illustrates a cross section of a housing input mechanism 100 taken through two keys of the MacBook. However, it should be appreciated that the cross section shown in FIG. 5A shown below may represent the user inputs of any of the electronic devices earlier noted (iPod, iPad, iPhone etc). In fact, the housing of the input mechanism may be integrated into any portion of the housing of a wide variety of consumer electronic devices, such as refrigerators, audio equipment, display devices, automobiles and other devices not specifically mentioned herein.

In one nifty idea, Apple states that by incorporating the housing input mechanism into an electronic device's casing, a user may be able to interact with the electronic device by exerting physical pressure on the housing of the device. For example, if your iPhone is in your pocket when it rings you'd be able to simply squeeze or tap on the iPhone through your pants to quickly silence it. This could come in handy when you're in an important meeting with your boss or professor. 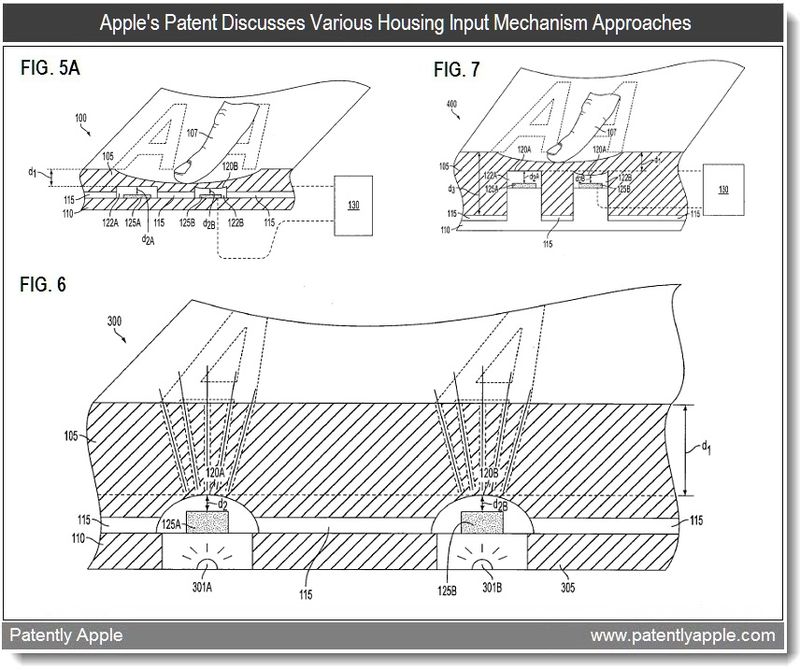 Apple's patent makes it clear that reconfigurable controls could be applicable with other devices in the future and provides us with a with a few oddball configurations to view. Yet it's the iPod where one of the examples shine. While Apple is likely to simply modernize their classic clickwheel with a new LED based UI, we see in patent FIG. 8C that they're also considering the implementation of a new spiral form of UI as well. That's the beauty of a reconfigurable UI - you have options. Apple discussed the software side of this conceptual iTunes Spiral UI for music and photos in December. Mating it with an easy to use hardware UI would be a powerful combination. 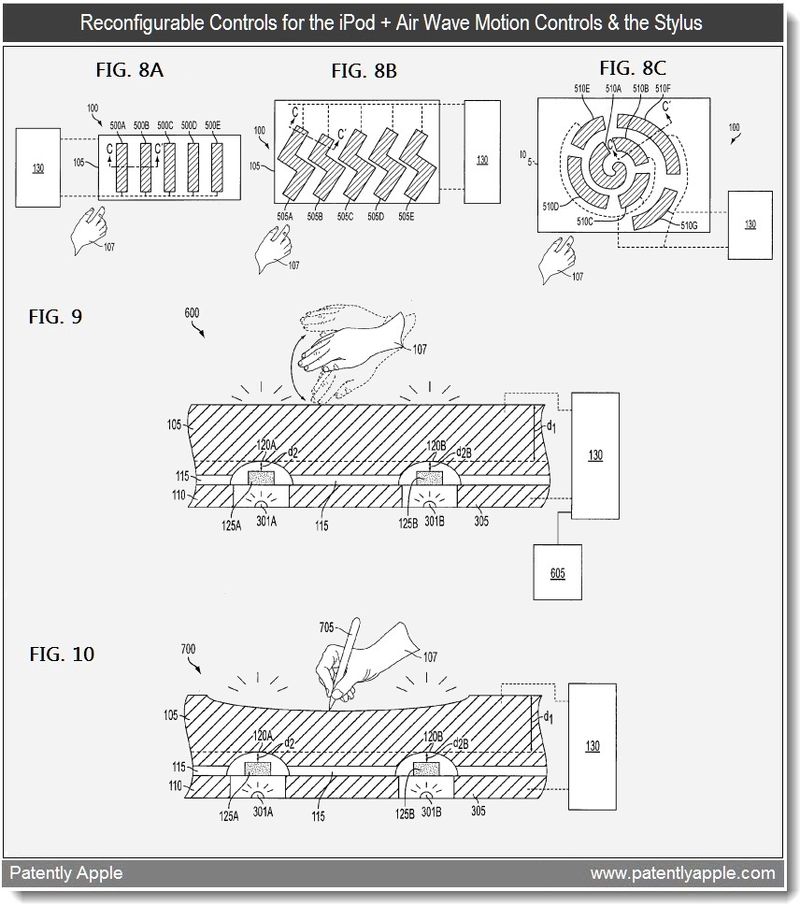 In Apple's patent FIG. 9 we see that Apple is considering the addition of hand-wave controls to the iOS experience. According to Apple's patent, the use of hand waves cause air pressure waves sufficient enough to cause the microprocessor to register them as a capacitance change. Apple touched on another form of air wave controls in an earlier MacBook Pro related patent in relation with the use of tiny cameras.

Einstein once said that "if we knew what it was we were doing, it would not be called research, would it? Sometimes when you see competing ideas in a patent, you have to realize that different Apple research teams are competing with one another while in the bigger picture, collaborating. One of these air control ideas will surface as the winner or different approaches will be taken for different applications.

The Stylus Keeps Popping Up

At the beginning of the month Apple's latest and greatest stylus/artist pen patent surfaced and was met with great applause from the artistic community. In stark contrast, the naysayers contorted into aliens at the mere thought that the dastardly stylus would ever be used on an iOS device even though the stylus is about to enjoy a comeback on Google's Android. In today's second patent relating to reconfigurable hardware interfaces, Apple indicates that the stylus is still being considered as a future input option - albeit with an all new stylus design.

A new Apple patent surfaced today relating to keynote, a core application in Apple's iWork suite. I'm not overly familiar with the inner workings of keynote and so I'm unable to find any tweak that Apple may be presenting here. However, if you want to check it out in the hopes of finding a new tweak or twist, then by all means check out patent application 20110040804. (For your convenience, here's a temporary link to that patent that will only last a day or two.) 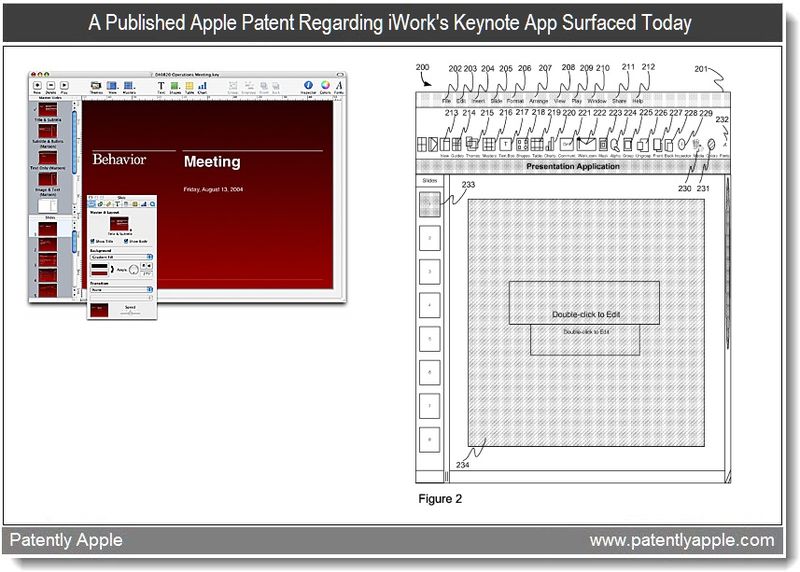