Apple has been working on utilizing light-transmissive controls for some time now and has actually begun incorporating them into the MacBook Pro. Last week a series of elaborate patents surfaced which provided us with a real in-depth look at some of the advances Apple is making on this front. The most startling design included a keyboard totally comprised of light-transmissive keys; a design that would also be able to reconfigure itself into other user controls such as a key or gaming pad. In today's patent, Apple looks at simpler controls that could be incorporated into the lid of a future MacBook or MacBook Pro to control music.

The heart of Apple's patent is found in FIG. 9 which depicts a MacBook lid having an invisible "button" noted as patent point # 904. The invisible buttons function through capacitive sensing. The buttons could controls for such things as status controls, Wi-Fi strength, battery levels or more importantly, iTunes or music controls.

The patent states that invisible touch sensing controls could be used to control music or video played from the computer; such as through invisible controls for rewind, play and fast forward, as well as volume. The invisible holes which are backlit, could form patterns indicative of the functions of these buttons (e.g., rewind arrow, play arrow, fast forward arrow, volume increase plus, volume decrease minus, etc.). 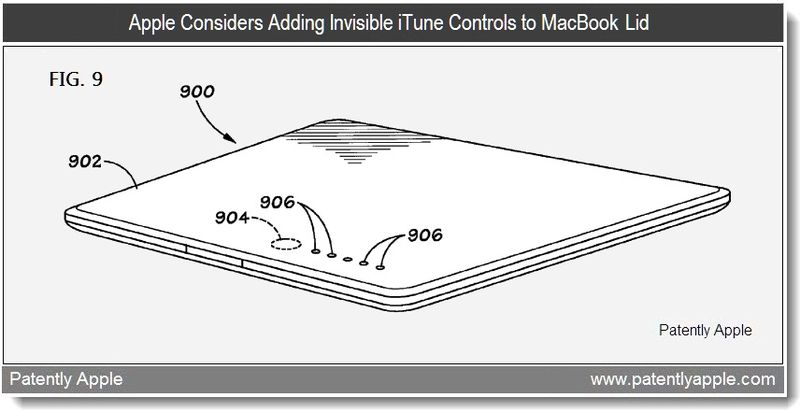 In some examples, invisible touch controls could be contextual and perform different functions such as that of a track pad with a large number of touch-sensing locations. In fact, the multiple sensing regions could be of virtually any desired configuration including a virtual keyboard, keypad or more. This was extensively discussed in last week's patent covering the reconfigurable MacBook.

How Hidden Controls Reveal Themselves

As depicted in patent FIGS. 7A-B and 8, the ability of a "button" or "slider" location (702, 802) to be invisible, but to selectively become visible could be achieved through tiny micro-perforations (704) formed in the surface of the MacBook's lid and illuminated by backlighting through LEDs under the micro-perforations.

The capacitive proximity sensors could be advantageously used to trigger such invisible contact locations becoming visible once a user's hand nears the location. It also enables those locations to then sense touch from the user. The selective illumination of virtual buttons or sliders could be used to provide guidance to a user in terms as to where and what an input is and is for. 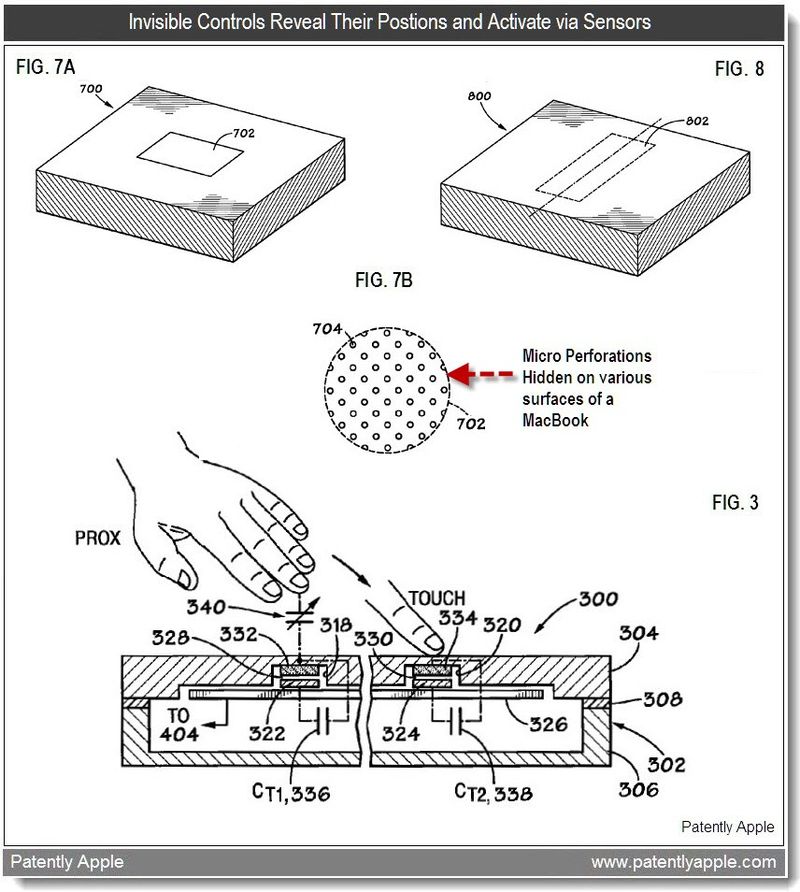 Automatically Switches from Proximity to Touch

Apple's patent FIG. 3 depicts a simplified representation of the sensing components of an example inventive proximity and touch sensing. The present illustrative system operates in two distinct modes, a first mode for sensing proximity, and a second mode for sensing actual touch with a contact surface. Once proximity is sensed and evaluated to suggest that touch is likely, or imminent, one or more connections to the sensing components are switched to facilitate evaluating touch rather than proximity.

And lastly, the patent states that these light-transmissive controls could be implemented into aluminum, other metals, plastic or glass.

There was another somewhat interesting patent application published today titled "Device Identity Matching." Although Patent 20110047589 is a little scatter-brained, it somewhat boils down to three key points.

1) It discusses a way that all of your devices will be able to better communicate with each other while making it easier to add a new device under your personal umbrella of devices. 2) This new system will act as another layer of security because of the particular way that you'll set up all of your devices, and 3) the new system may very well pave the way for us to begin the process of communicating with home devices or home functionality like turning on our lights or raising the heat before we get home. The process has to be secure or you'll have hackers controlling your home security and appliances while your at work and that would be a nightmare without saying.

Yet to even get to that last point of inter-home communication sophistication, you'll need to set up a home management dashboard-like device which Apple just happens to be working on. This is definitely the initial phase of research relating to mobile device interaction with the home. Yet, it's still interesting to note that it's on Apple's roadmap today. In the meantime, the first half of the patent may have a better chance of materializing. I only hope that it's easier to use than it was trying to read this patent.

One of the Original iPhone Patents

Patently Apple rarely covers continuation patents, and today is no exception. But for those wanting to look at one of Apple's original iPhone patents dating back to 2006, you could do so by feeding number 20110043527 into this search engine. Yes, it's one of Apple's "fulfilled" patents that came to life.

One: Future Apple Notebooks & Tablets may use Acoustic Commands