Apple and HP have always had a peaceful co-existence. The Woz started with HP and both he and Steve Jobs deeply respect HP. Apple was all-to-happy to make HP an iPod partner in 2004. It was also reported last October that "HP executives gushed about a printing partnership with Apple and the iOS." And Apple just bought a 96 acre Cupertino campus from HP. That's as cozy as it gets in Silicon Valley. But competitors they are and this is the year that HP will veer right into Apple's face. 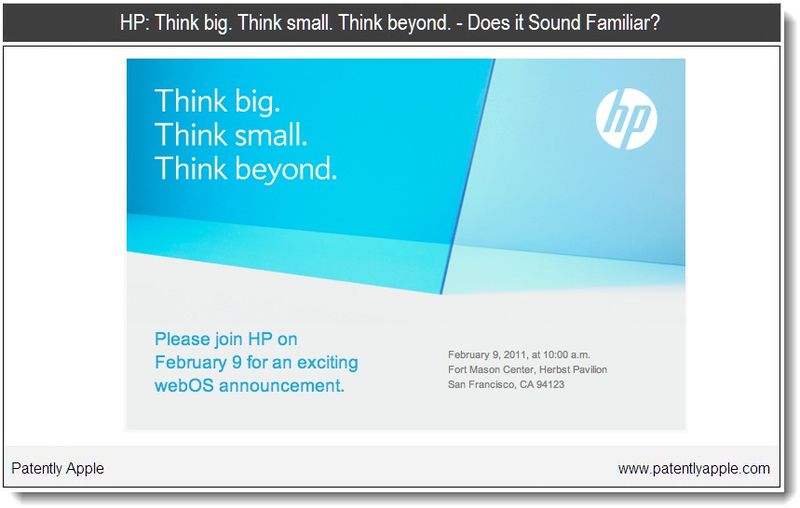 While I'm not going to rehash Jon Rubinstein's history or his role in the development of the iPod while at Apple, I will say that HP knew exactly what they were gaining by acquiring Palm in 2010. Yes, WebOS is a mobile OS that will differentiate HP's products from the drones of Android look-alikes, but more importantly, HP knew that they'd be gaining someone who was at the heart of the iPod's development and the beginning of the new smart-device revolution; someone who sat in on countless meetings with Steve Jobs and who understood the very thinking behind the revolution's mind-set and market-think. I mean, who didn't notice the resemblance between HP's new "Think" oriented marketing campaign unleashed this month and Apple's own "Think Different" ad campaign? Accidental you say? Well think again.

HP knows that in order to beat Apple at their own game, they'll have to come at Apple on multiple fronts. They'll have to launch new types of mobile devices ahead of Apple's curve to diminish Apple's market impact going forward; they'll have to offer more choices in design and price points than Apple; they'll have to tightly integrate new creative apps and services into their new devices, and finally, get-with-it in terms of cranking up the volume for mystery marketing. Their current campaign is an excellent example of mystery marketing akin to Apple's known marketing tactic. Give the audience a peek of something new and then crank up the noise of expectation associated with a "special event."

Apple's ability to time news leaks, start rumors and beat the drum at an accelerated pace leading up to an Apple event is nothing shy of being a lean, mean, marketing machine. HP has gotten to understand this first hand by listening to Jon Rubinstein. And it's rubbing off. HP's marketing machine has been in overdrive since the beginning of the year. Their presence in the news cycles has been increasingly growing louder and louder and louder; and not only on the topic of tablets.

HP is cleaning house and bringing in more heavyweights onto their board. Look at how HP's Chairman of the board Raymond Lane described Meg Whitman: "Meg Whitman is a true visionary…" – and what else? Yes, a "…thought leader…" Yeeees, HP is out to strike a chord with the market along Apple's historic lines of Think Different. And Wall Street is listening and liking what they're hearing about HP's readiness to finally take on Apple and the whole mobile space in general – with a plan.

One of HP's Conceptual Handhelds 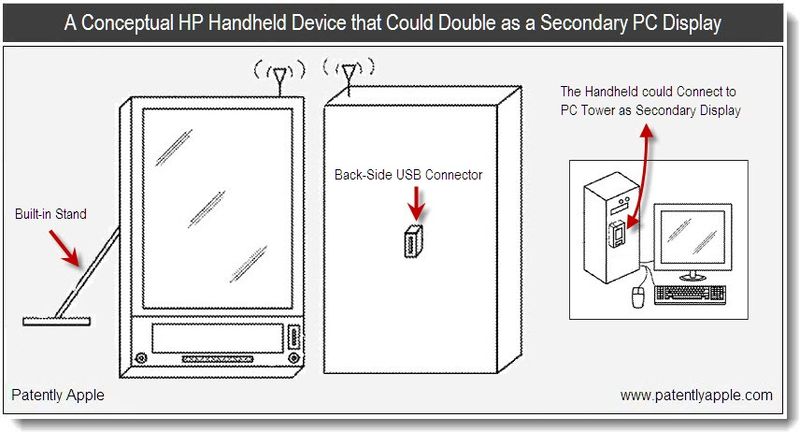 While HP's February event will be focusing on challenging Apple's hot selling iPad and iPhone to be sure, they may also be considering a run at Apple's iPod or iPod touch at a future point in time. A 2011 patent that surfaced this month confirms such a wannabe challenger and even points to Apple's iPod specifically as follows:

Is it a possibility that HP is working with Apple on such a device? I'd say no, as the patent was originally filed prior to HP's acquisition of Palm. But odder things have happened and so it's worth keeping this patent segment on record.

One of the advantages to HP's conceptual handset, beyond being that of a media player, is that it's also designed to work with Microsoft's latest Windows desktop OS. Specifically, it's designed to act as a secondary PC display so that the user could, for example, watch a full screen presentation of a keynote while keeping an email window active on their handheld. This way the user could quickly review or respond to an email without shutting down or rearranging their desktop. This unit could work wirelessly or be uniquely connectable to the frame of a mini PC tower as noted in the patent illustration above.

Earlier this week we posted a report titled "Apple Gets Closer to a Virtual Keyboard for the iMac +." Although that patent's illustrative focus was definitely on that of a desktop keyboard, the patent also clarified that the concept could also apply to a laptop.

As illustrated above, HP is likewise working on such a dual display multi-touch laptop that could present both a virtual keyboard and mouse. The advantage of the virtual mouse is that the user would be able to perform a traditional "right-click" operation and be more intuitive than complex multi-touch actions. It's a novel approach that I'm sure would have to be seen to be appreciated. Switching between the virtual keyboard and mouse is stated to be accomplished by pressing one of two related buttons located on the left side of the bezel as noted in the illustration above.

At the end of the day, HP is finally about to introduce their initial next generation mobile devices. While we may not see their wild new wrist watch debut until 2012-2013, we'll definitely be seeing a family of tablets, smartphones, netbooks and more. In the big picture, HP appears to be thinking of a new branding scheme for their upcoming mobile invasion. Although no one could say with any certainty at this point in time which new brands will finally surface on February 9, there's one brand worth noting and remembering. One they dubbed as "Veer."

Although HP first applied for the "Veer" trademark in December 2010, its most recent application, filed in January, focuses on a tighter definition of products under its banner. HP's trademark application 85217757 is noted as covering the following devices:

HP's event is likely to cover a number of these products. The twist however, could, and I stress could, involve a new cloud based service backing these new devices. A service either derived from a new 3Par product or one stemming from a consumer twist to their already existing enterprise "Storeonce" service. HP acquired 3Par in an all-out war with Dell in August of 2010. They'd now look like geniuses if they could hit the ground running next month with a cloud based service backing their debuting devices. (Update: 24 hours later, and something called the "Cloud Canvas" was leaked to the press.)

One of the notable attributes that HP's Storeonce covers, for instance, is "data deduplication." This could theoretically allow for a family of devices to store a common music library, for example, in the cloud. That could translate into delivering smaller thinner devices using smaller Flash drives and getting better battery life for mobile devices.

It's a known fact that marketing whizzes like to play with names and concepts that we're all familiar with and simply twist them to a focused product line that they wish to promote. In the example of HP's Veer, we must first note its dictionary definition as being to "change direction or turn about or aside; shift, turn, or change from one course, position, inclination, etc., to another."

Of course that could mean one or two things in context with HP. It could be simply marking a turning point for HP's historical PC centric product line and/or, more importantly, mean that HP is going to change the mobile device business and marketing model crafted by Apple and turn it on its head. I'm thinking the latter. And if correct, the February event could be a blockbuster moment in the tech sector's history.

If HP is to make a dent against the freight train called Apple and muscle their way past Google's widely adopted Android, they're going to have to introduce a game changing marketing strategy here that leaves everyone else in the dust. They need an easy to use Music/App Store and a whiz-bang cloud based service to back their shiny new toys. Does HP have what it takes to mount such a challenge and comeback? Will HP veer right into Apple's face? We'll find out on February ninth. Until then, what are your thoughts?

Update II May 26, 2011: HP Launches Paul McCartney's Instant-On Digital Library. The new state-of-the-art library houses McCartney's digital assets in the cloud. While this is interesting, the question is, will this spill over to an HP consumer-side Music Cloud service in future?

Not really Maya. He made hundreds of millions in options at Apple. When you make that much money and you're young enough, you want to do something where you have more control. He'll do great at HP just as he did with Apple.

If Jon Rubinstein were as intelligent as HP thinks, he wouldn't have gotten out of Apple.

Apple and HP as partners could effectively crush the rest of the market players. Brains and brawn together? That's what happens when David and Goliath join forces.

Calling it veer is just asking for the jibe about "veering off course". WebOS was superior in some ways up to 4.2 - but the developer only multitouch gestures of 4.3 really do erode that advantage.

Nothing like putting a little pressure on HP. I doubt that they could pull that off. But if they do, it'll only push Apple harder and that's not a bad thing.

Long ago are gone the day of the original Hewlett and Packard as engineers.

But it can be "the second coming of HP"!